Vacated crustacean exoskeletons are formed by overlapping, melted acrylic cutouts. The shrimp, synonymous with diminutiveness and weakness, is enlarged here, and acquires a newfound, and rarely granted, status and focus. A surreal memento mori; the sculpture’s meek title, and the cloying sweetness of the translucent pink rippling armour, smuggle in darker themes: the injustice of the food-chain, our own dependence and vulnerability, and the inevitability of death.

The shrimp motif and its empty exoskeleton run through a number of Fudakowski’s works. While its meaning and significance has morphed, the connection to death has remained consistent. In Are you eating well? (2014), created and exhibited for Meat in the Window, worried by a wasp exhibition at Futura Gallery in Prague, the delicate husks were strung up in a passageway, and scattered around the floor, creating obstacles for visitors. In that work shrimp represent luxury, the ambition to achieve status, and an elderly grandmother’s anxiety for the health and wealth of her granddaughter. In the same year, Death of a Shrimp, a square formatted video screen turning very slowly from grey to pink, mirrors the process of a (white skinned) human’s death, but in reverse. In Revenge (2019), shrimp symbolise the wrath and punishment inflicted on a cheating ex-lover by their jilted other-half; sewn inside curtains, the shrimp decompose creating an invisible yet sensational stench. In the series It’s clear to me now, albeit decidedly too late, that we have not always seen things from the same perspective (2021 – ongoing), shrimp shells hang alone, enlarged, yet empty, with lightbulbs dangling like dislodged eyes – pointing to a more sinister end; that of an environment thoroughly out of balance. 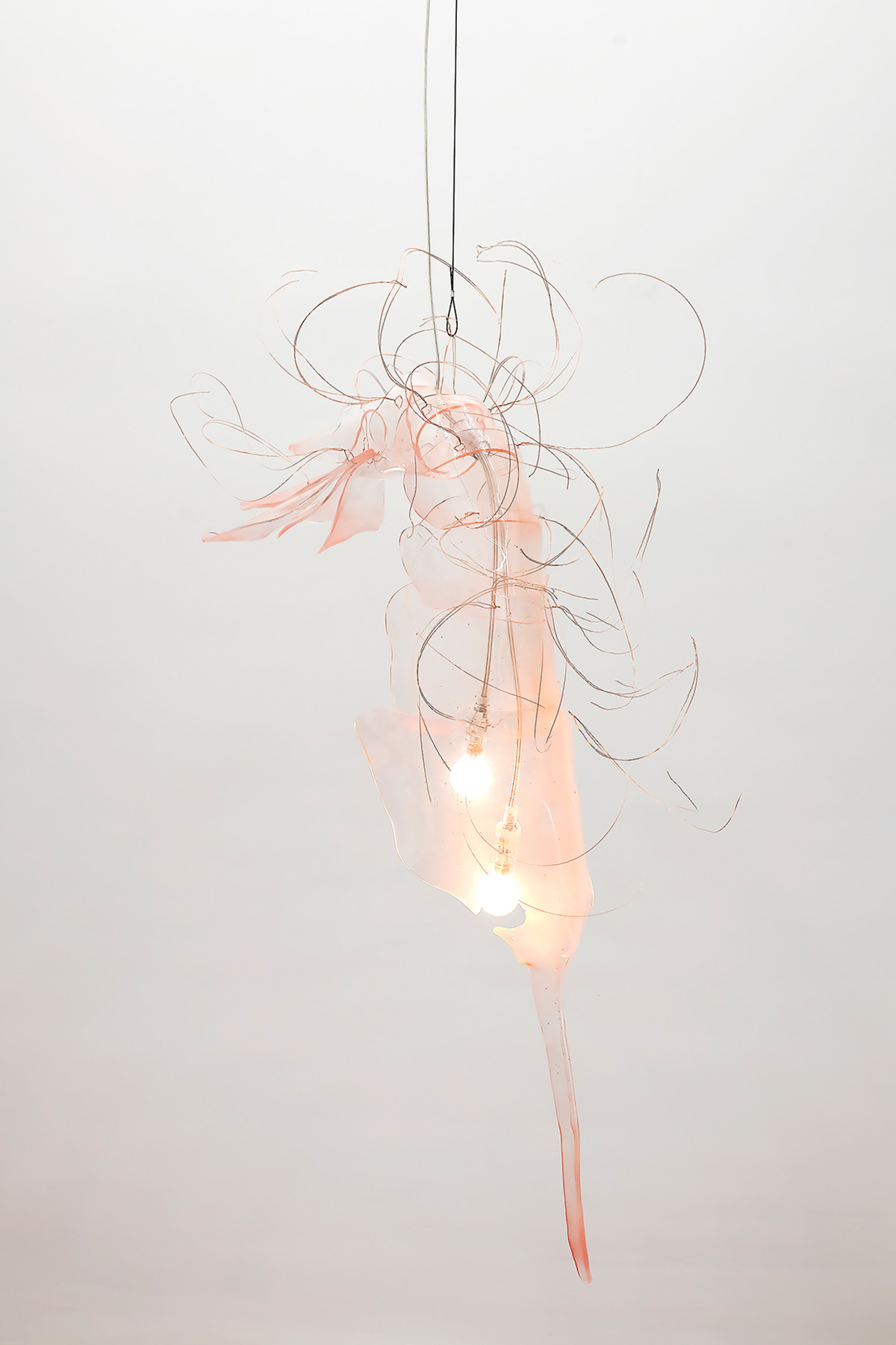 Kasia Fudakowski, It’s clear to me now, albeit decidedly too late, that we have not always seen things from the same perspective, (Roasted) XVIIII; Plexiglass, acrylic paint, copper, wiring and bulbs, Shrimp: 130 × 50 × 20 cm; Photo by Billie Clarken