The exterior of ChertLüdde’s gallery doubles as a signage space for artistic interventions, the first of which will be by Japanese-American artist David Horvitz.

Crowning the entrance is a watercolor text that reads, “becoming a unicorn using a banana as a horn,” followed by a date, time and an image file number. The phrase comes from Horvitz’s artist book published after his work Nostalgia (2018–ongoing), which comprises the artist’s personal digital archive– made with various digital cameras since the early 2000s– of quotidian snapshots documenting his life. Each image was projected for one minute for the duration of the exhibition before being permanently erased. The title refers to Hollis Frampton’s film Nostalgia (1971).

The image-less book Nostalgia remembers these irrevocably deleted moments through pages containing the filenames and dates of the deleted photos, each with a description of what was once depicted. Horvitz evokes with the simplicity of these descriptions what he describes as a world “over-inundated and amassed with photographs (mostly digital) and with eroded attention spans,” choosing instead to hold on to the emotional remnants of an endless stream of images.

Just as our personal memories can easily be forgotten or destroyed, they can also remain as subtle imprints shaping our present –such as in the case of the former theatre props and decoration store Deko Behrendt, which now holds the gallery’s premises.

Witty and poetic, the work of David Horvitz meddles with systems of language, time and networks. Eschewing categorization, his expansive, nomadic body of work traverses the forms of photographs, artist books, performances, the Internet, mail art, sound, rubber stamps, gastronomy, and natural environments. His work examines questions of distance between places, people and time in order to test the possibilities of appropriating, undermining or even erasing these distances. Using image, text and objects, his works circulate and operate independently of himself, penetrating ever more effectively the intimate sphere. When encountering his works– in the postal system, libraries, or the airport lost-and-found services– our attention to the infinitesimal, inherent loopholes and alternative logics, and the imaginary comes to the fore. Like lullabies impressed upon our minds, Horvitz deploys art as both objects of contemplation and as viral or systemic tools to affect change on a personal scale. Horvitz makes fictions that insert themselves surreptitiously into the real. 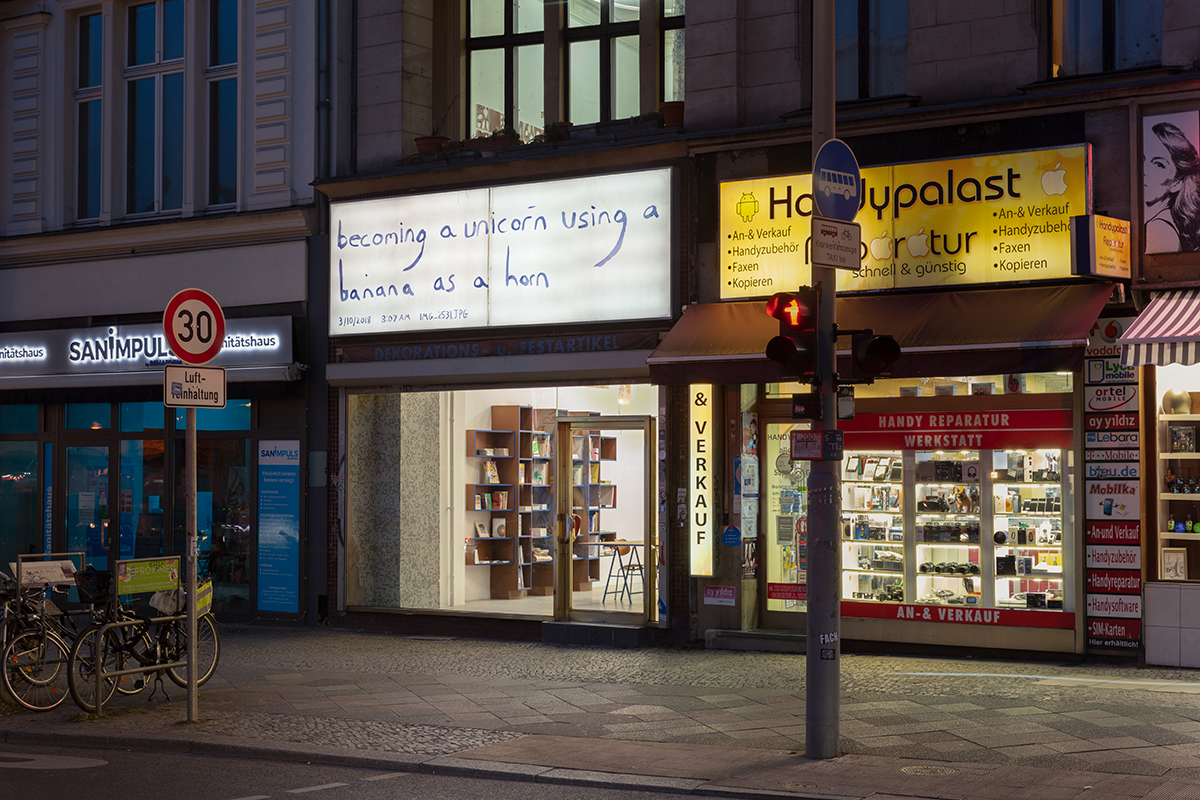 David Horvitz, becoming a unicorn using a banana as a horn, Installation view at ChertLüdde, Berlin, 2022