We regretfully inform you of the passing of Alije Vokshi.

The sad news was announced by her family on 31 January 2022. 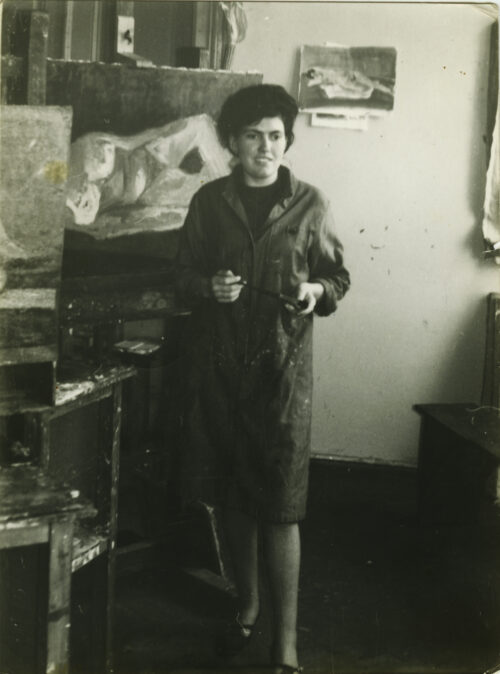 Whether in portraits, landscapes, or abstract motifs, her style was immersive and unique.

With her portraits of female sitters – whose hands are enlarged to show the work behind notions of care and domestic labor –  Vokshi fits seamlessly into the international feminist discourse that developed abroad during her formative years. Her works serve as a witness to atrocious and neglected historical events, moments experienced through her eyes that were captured in time with her brushes.

​​Alije Vokshi was born in Prishtina, Kosovo in 1945. She studied painting at the Academy of Figurative Arts in Belgrade, Serbia, becoming the first academically trained Albanian woman painter in Kosovo in 1968. In a sociopolitical context where few women had the opportunity to pursue higher education, especially in the arts,  Vokshi became a trailblazer within Kosovo’s art scene. Despite pressures to conform to traditional expectations of a woman’s place in society, she never allowed her practice of art to play a secondary role. Determined to become a recognized painter in a male-dominated scene, she moved to Paris, France in 1977 to attend a specialized program at the Académie de la Grande Chaumière before returning to Belgrade to earn her master’s degree. Although steeped in a patriarchal art system that marginalized women,  Vokshi persevered, and today stands as one of the most prolific artists of her time.

We extend our embrace to her family, whose dedication and care made Alije Vokshi’s first solo exhibition outside the Balkans possible last year.