Marleen Rothaus  (Bielefeld, 1991) studied painting at the Düsseldorf Art Academy, where she graduated in 2020 as a master student of Andreas Schulze. In 2016, she took up parallel studies in social work in Cologne. This was the starting point of her involvement in the feminist movement, which has led her work to receive international recognition.

Her work has previously been shown at the Bonnefantenmuseum, Maastricht; Kunsthalle Düsseldorf, Düsseldorf; and sonneundsolche, Düsseldorf, amongst others. As an artistic assistant at Kunsthaus KAT18 and member of X-SÜD, Marleen Rothaus is committed to the social recognition and equal rights of artists with disabilities. She lives and works in Cologne.

Like Water deals with the complex relationship between rage and femininity from different perspectives and using various artistic media. It also explicitly deals with femininities outside of a binary gender system.  One thing is clear: Few emotions have been historically and socially gendered as strongly as anger. Gender does not only influence the personal handling of anger, but also the possibility to use its potential. It is primarily women, non-binary and trans people whose anger is not heard. This circumstance is reinforced by other forms of discrimination. But just because this anger often remains invisible, it does not disappear.

The title Like Water references a quote from writer and activist Soraya Chemaly, who writes in her 2019 book Rage Becomes Her, “Anger is like water. No matter how hard you try to contain it, channel it, or deny its existence, it always finds a way, and usually the way of least resistance.”

Rational or impulsive, personal or political, empathic or isolating – feeling anger at all is not a given. Yet, in its ability to call attention to grievances and point out personal boundaries, it is one of the most powerful emotional and political tools we have. Through the interpretations of our artists, common associations of anger and femininity are questioned and broken. The many different artistic positions will let you participate in the causes, facets and strategies of anger through painting, ceramics, video works, installations, live performances, a reading and conversations. 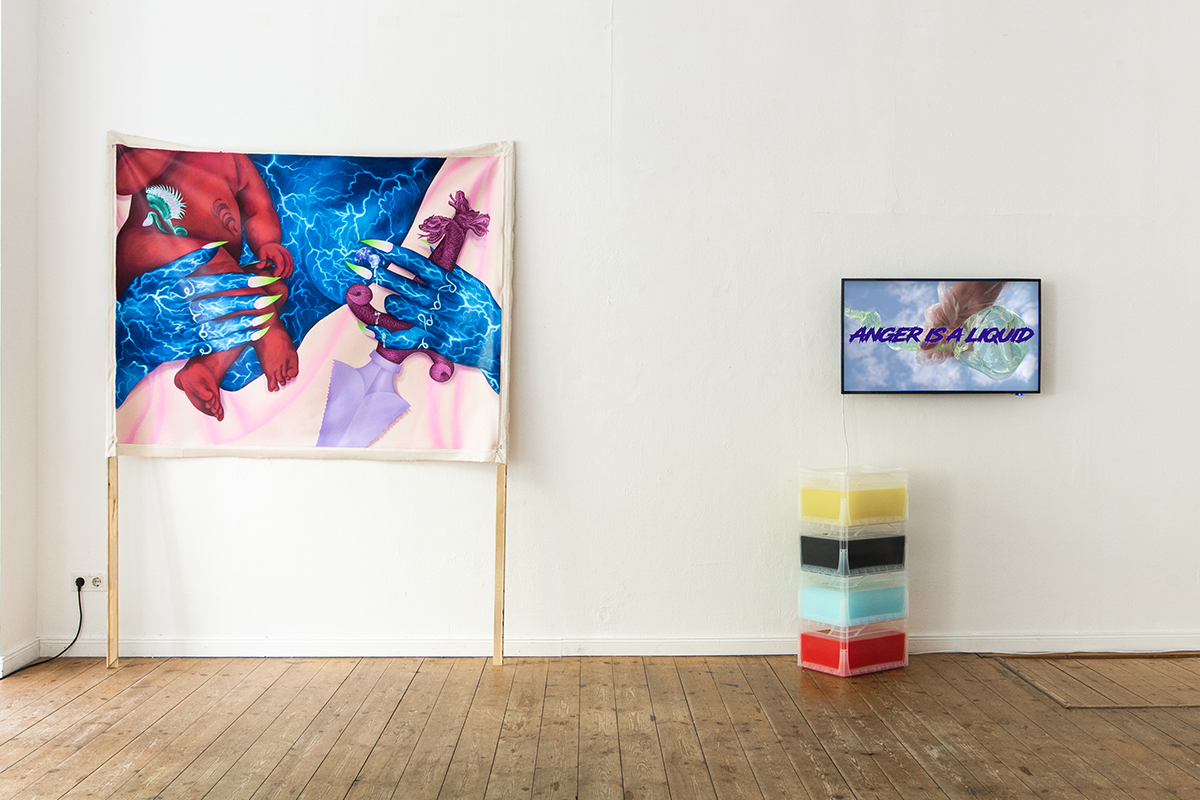 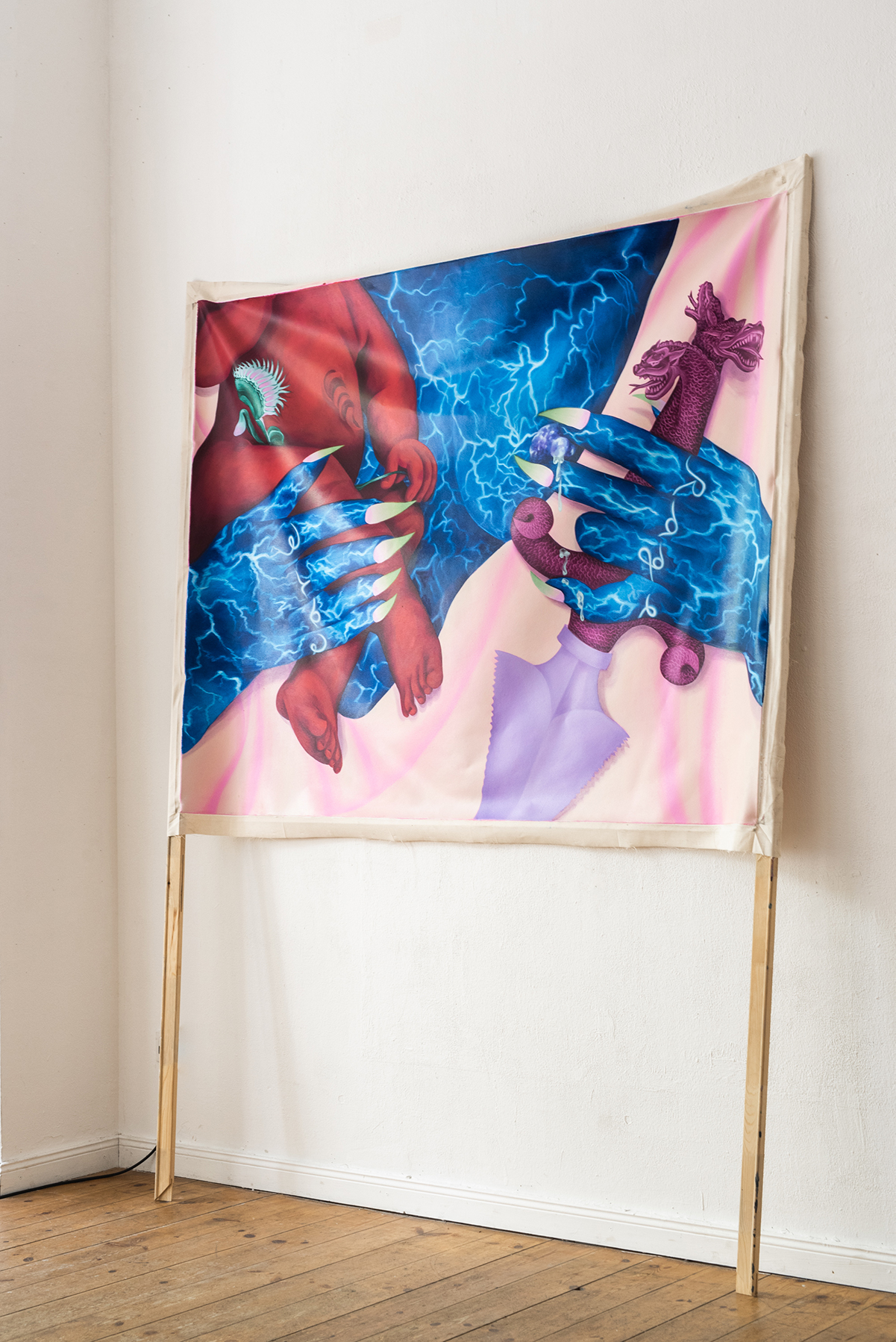 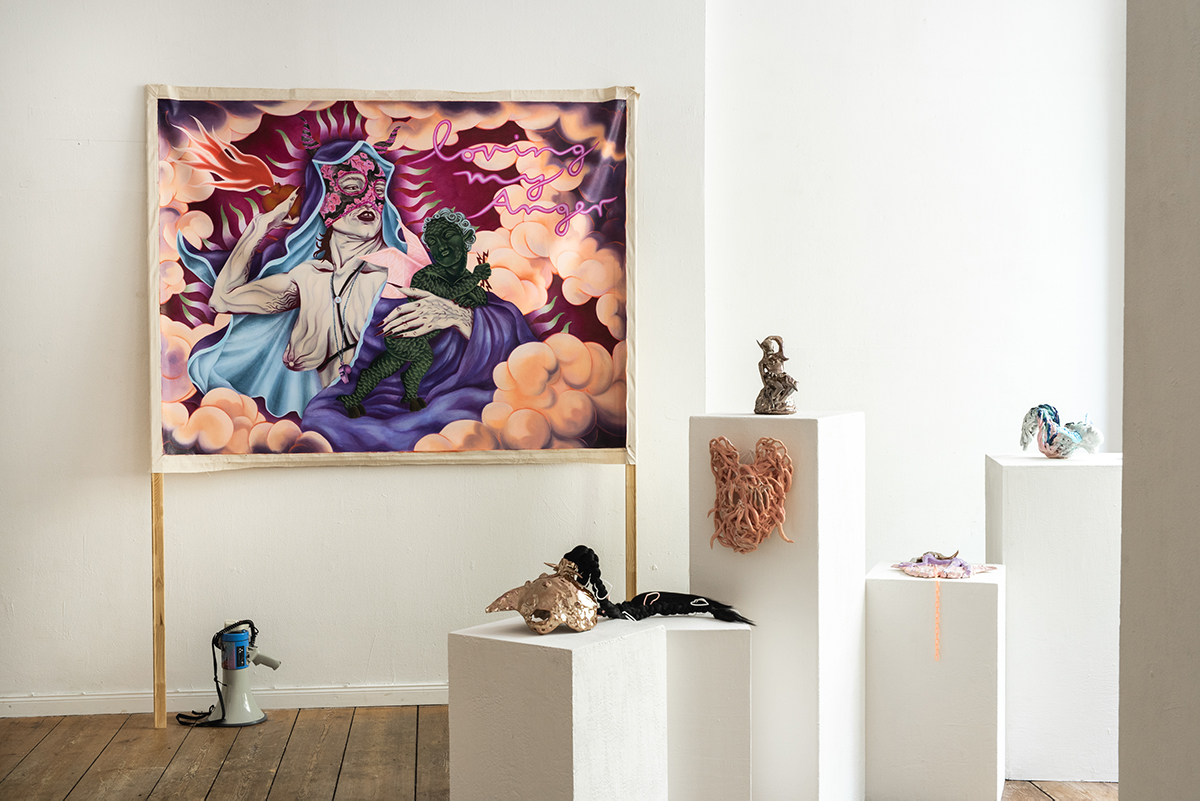 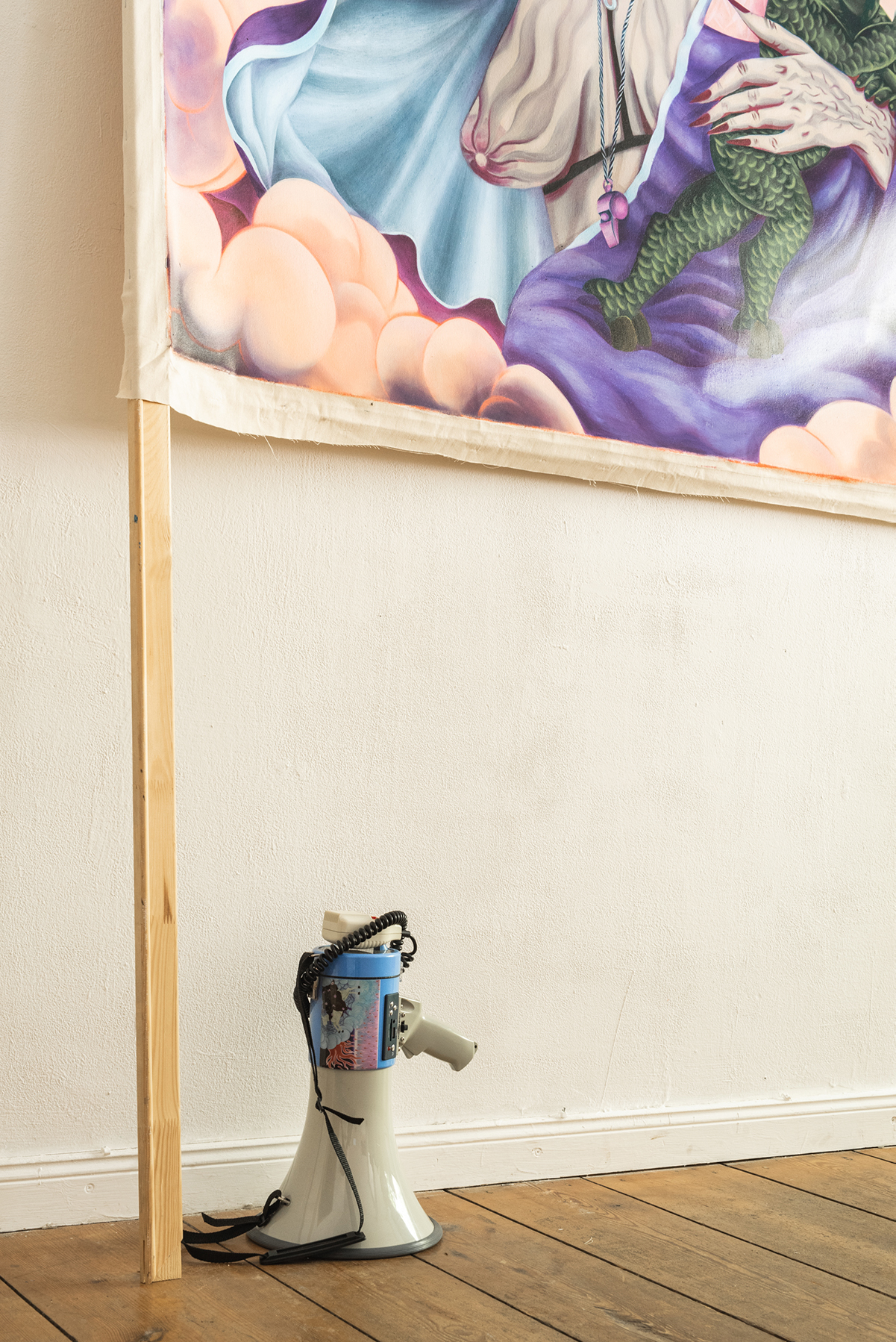 False Flat forms a new step in the train of thought behind Beating Around the Bush, with everything revolving around painting this time. With regard to both form and content, painting can assume many different guises. False Flatcelebrates this multivocality by spotlighting various painterly approaches, whereby there are no restrictions to art on a flat surface, but also pay attention to more experimental and cross-disciplinary practices, presenting formalist examples alongside engaged and even activist works.

There is a special focus on four exceptional artists, who are participating in small solo presentations: Hadassah Emmerich, Fons Haagmans, Rik Meijers and Marleen Rothaus, each of whom take their own approach to painting and show the breadth of the spectrum of the medium. Their work enters into dialogue with the work of artists in the collection who play with the concept of painting, whether stretching it or getting to its essence from a different angle. These artists search for the link between word and image, explore the materials that can make up a painting or demonstrate that a painting is not necessarily just a single static picture. 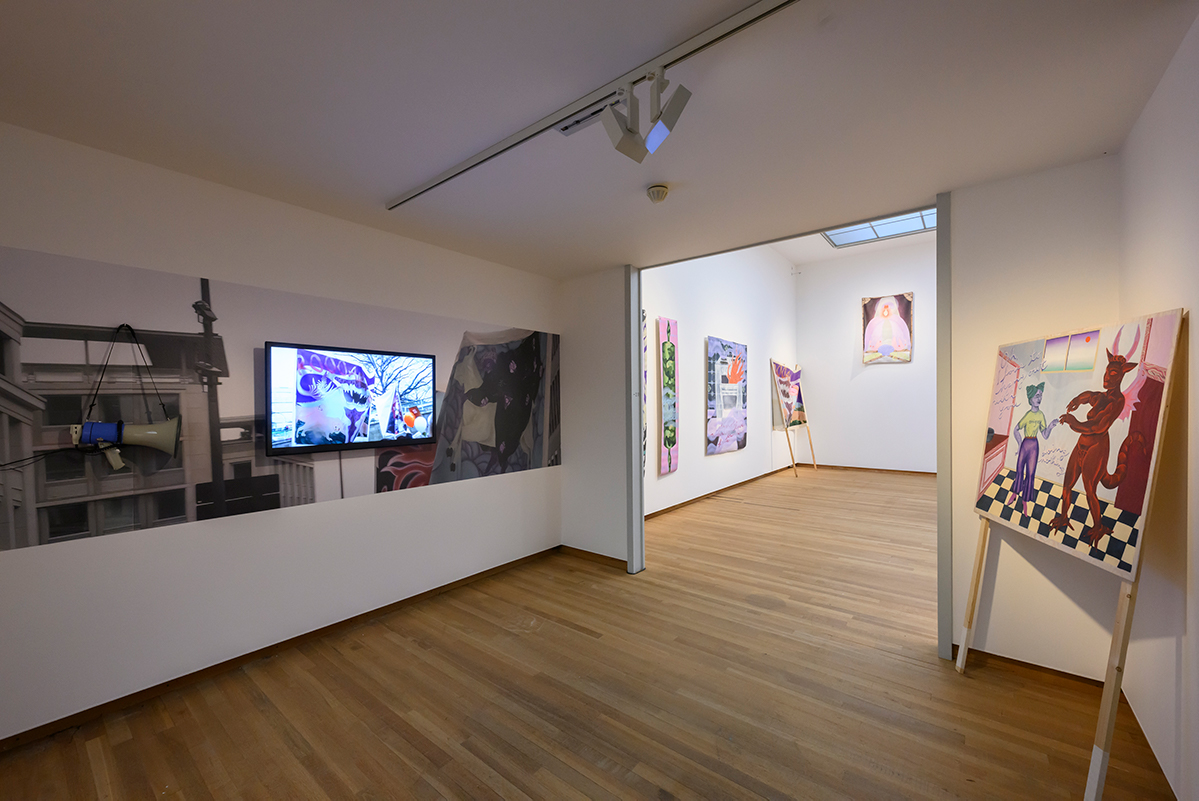 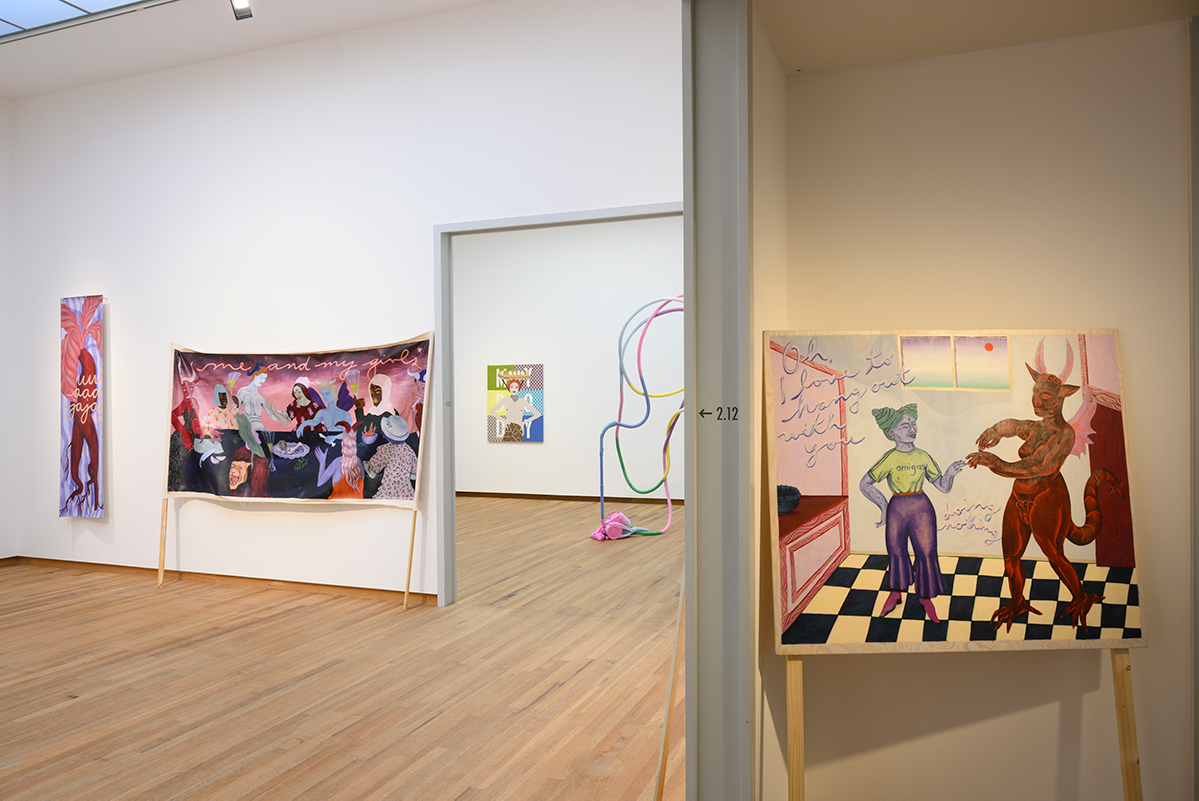 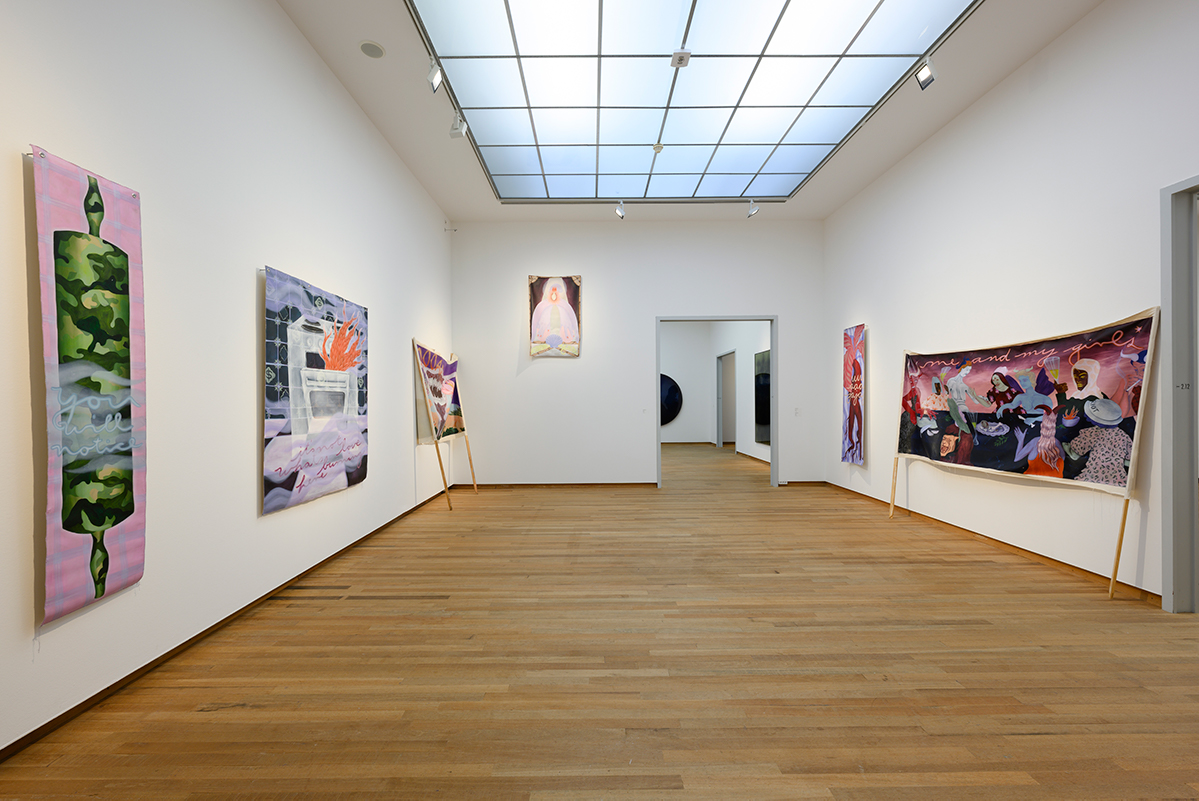 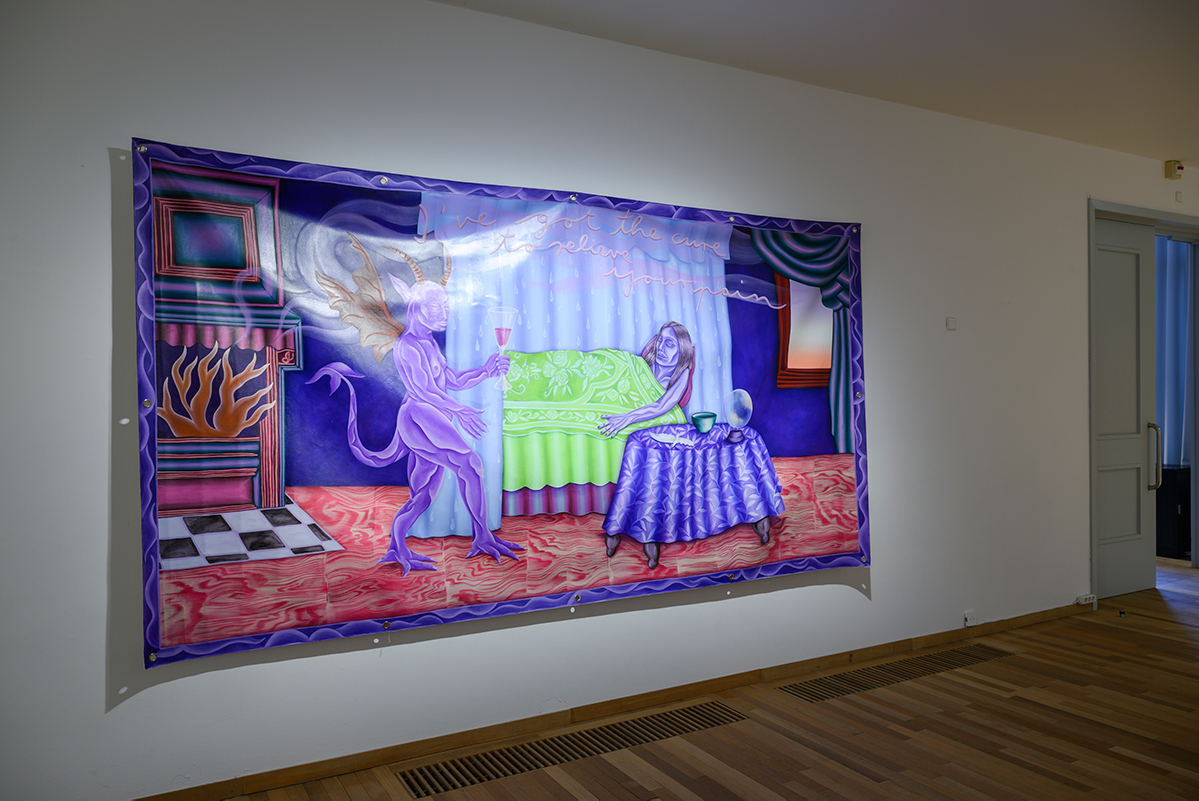 For MUR BRUT 21 Marleen Rothaus designs the wall in the parking garage of the Kunsthalle Düsseldorf.

On the occasion of the International Day against Gender-Based and Patriarchal Violence and the protest marches that take place every year on November 25 under the motto Reclaim the Night, the wall in the parking garage is staged as a billboard, like an advertising space in public space. For this purpose, the artist Marleen Rothaus applies a painting reproduced on poster paper under the title After All of the Darkness.

Aesthetically reminiscent of early modern woodcuts, the work takes up depictions of witch hunts, which were used as propagandistic means to defame and oppress women via demonizing attributions. Women allegedly forged pacts with the devil, who can be understood as a figure of resistance against prevailing power constructs. Largely neglected in historiography, the witch hunt represents an unprecedented crusade against female and queer self-determination, which, for example, in the form of femicide, shows continuity to the present.

In addition to figures borrowed from early modern woodcuts, there are also figures based on photographs of feminist activists from the contemporary transnational March 8 movement. Designed as a panorama, the motif represents a supra-temporal union of feminist struggles and is a sign of common protest. 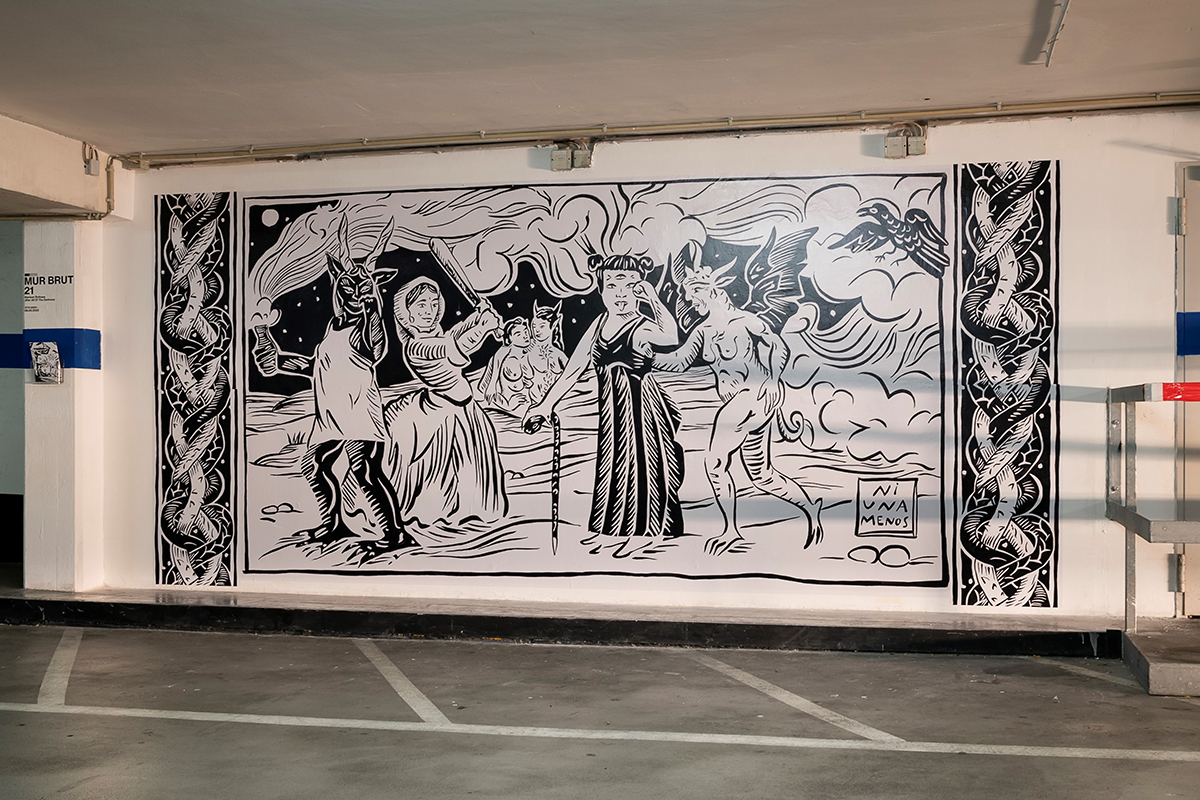 Marleen Rothaus, Installation view of After All Of The Dankness, MUR BRUT 21, Kunsthalle Düsseldorf Car Park, Düsseldorf, 2021 – 2022; Photo by Katja Illner; Courtesy of the Artist 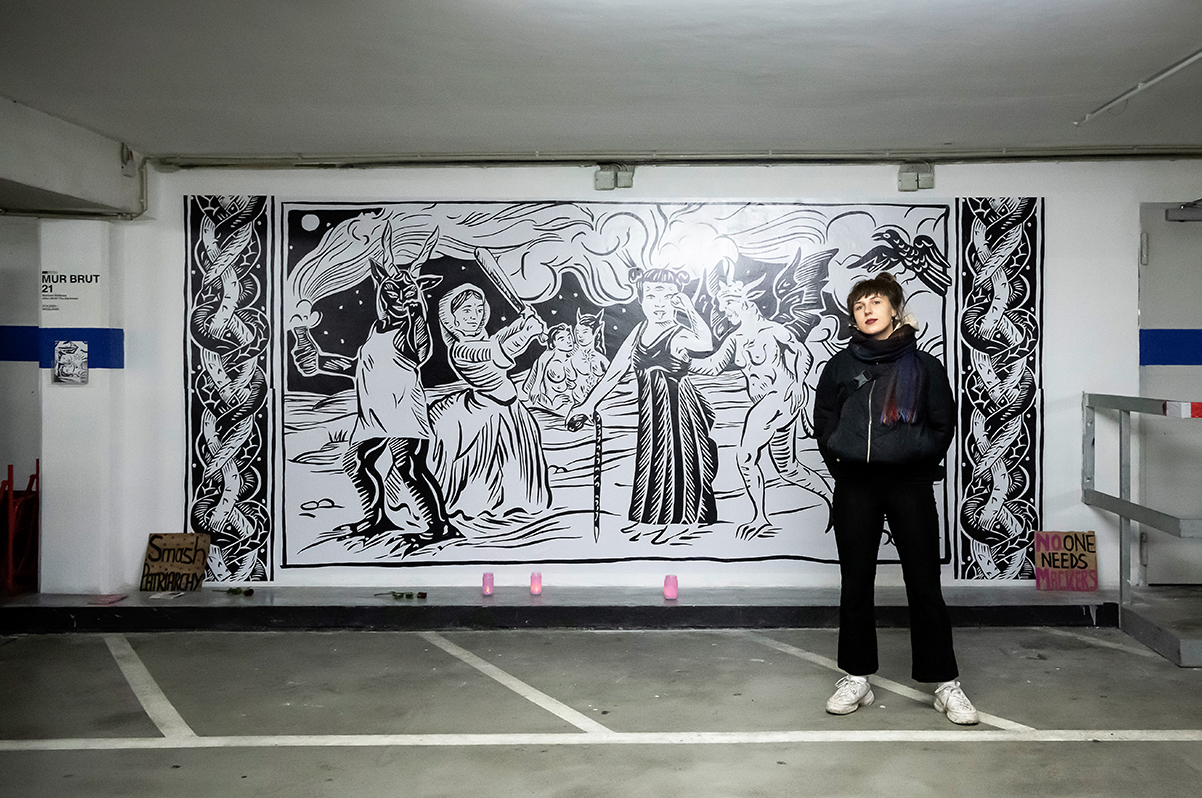 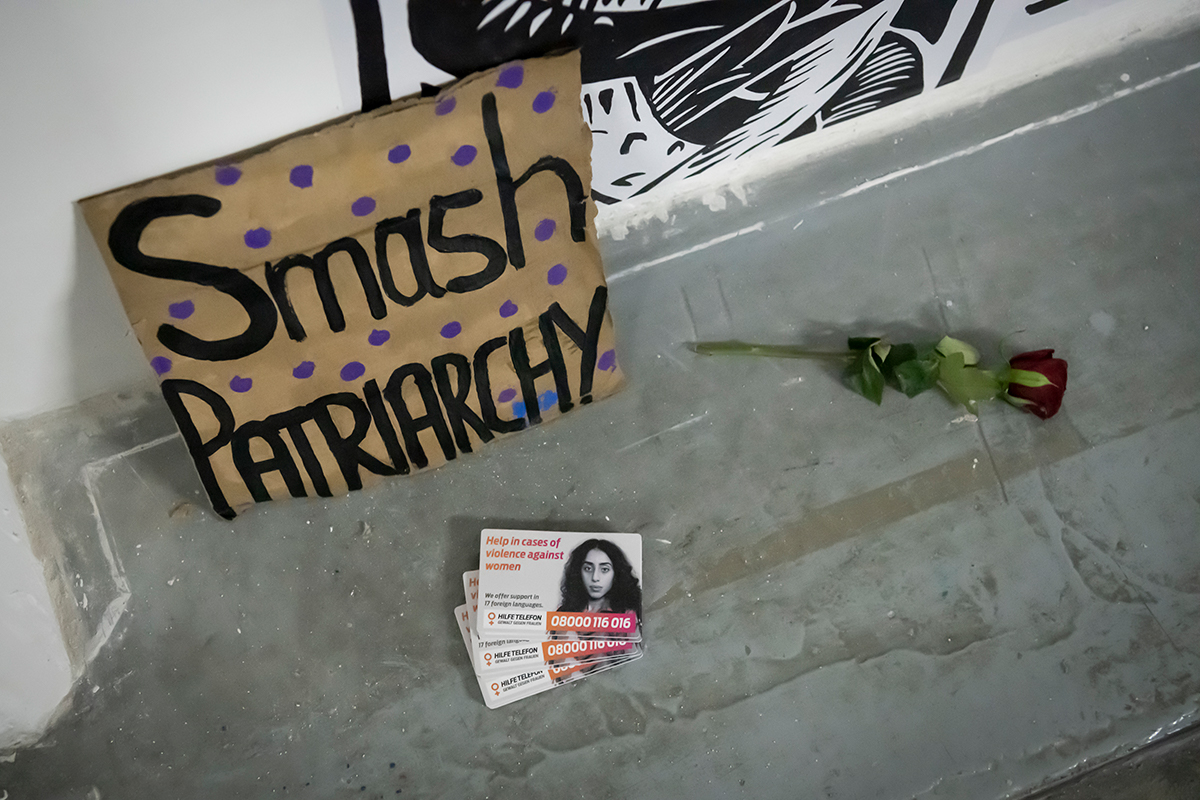 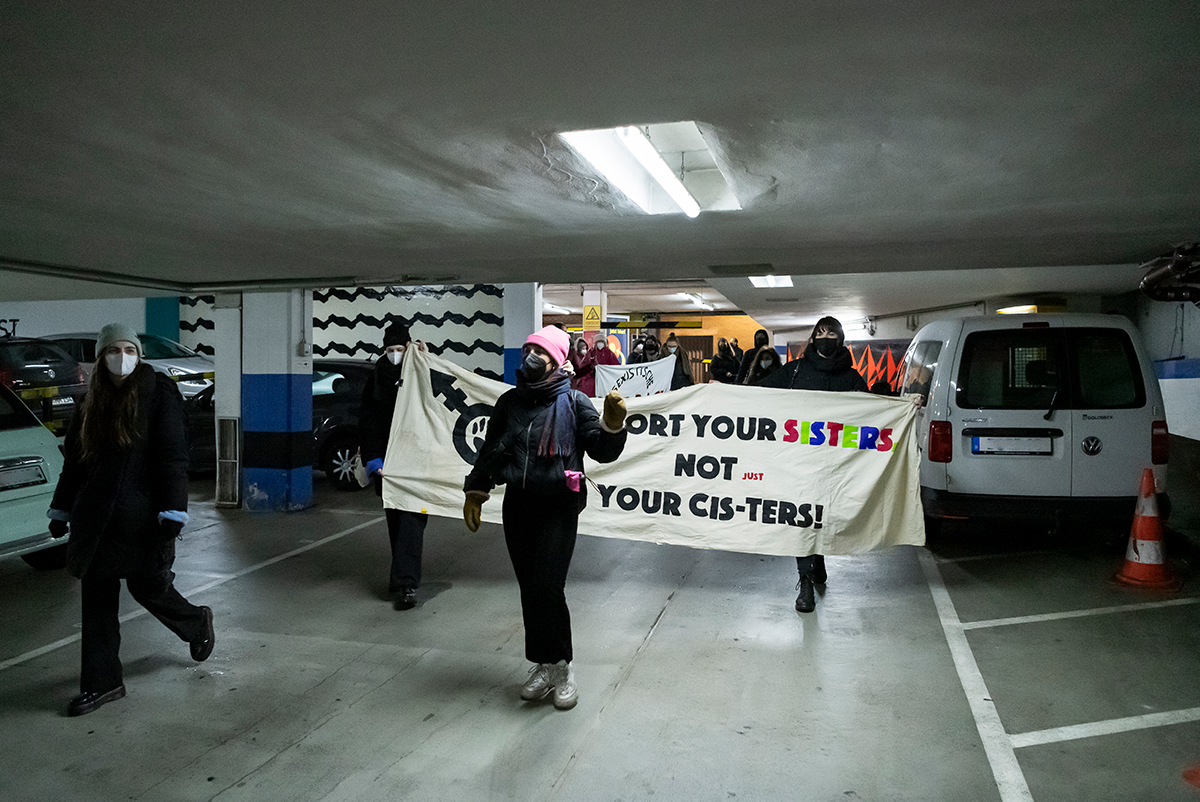 In her artistic work, Rothaus explores the intersection of art and political activism. Her oil paintings on canvas and wood initially reference classical painting in their materiality before being transformed into political banners and signs. In this form they become props for feminist protest actions.

The motifs of the banners revolve around themes of unpaid and invisible care work with female connotations, sexual and reproductive self-determination, and the figure of the witch as the autonomous womxn with whose persecution the exploitation of womxn in the sense of capitalism began. By carrying her paintings as demo banners into public space, Rothaus questions the traditionally heavy medium of painting for its current possibilities. She gives painting political viability and takes away its elitist status.

In her current exhibition Hex Me at sonneundsolche in Düsseldorf, Rothaus shows a series of protest signs in the showcase visible from the street. The pictorial motifs of the signs are inspired by modern woodcuts depicting so-called witches, which, in combination with bright, militant lettering, call for a rewriting of our historical consciousness. Via the affirmative appropriation of the witch figure possessing magical superpowers, Rothaus plays with asserted power in order to derive emancipatory potentials from it. Viewed on paraphernalia of resistance, the witches herald the same threat they posed to patriarchal capitalism and white supremacy even then. 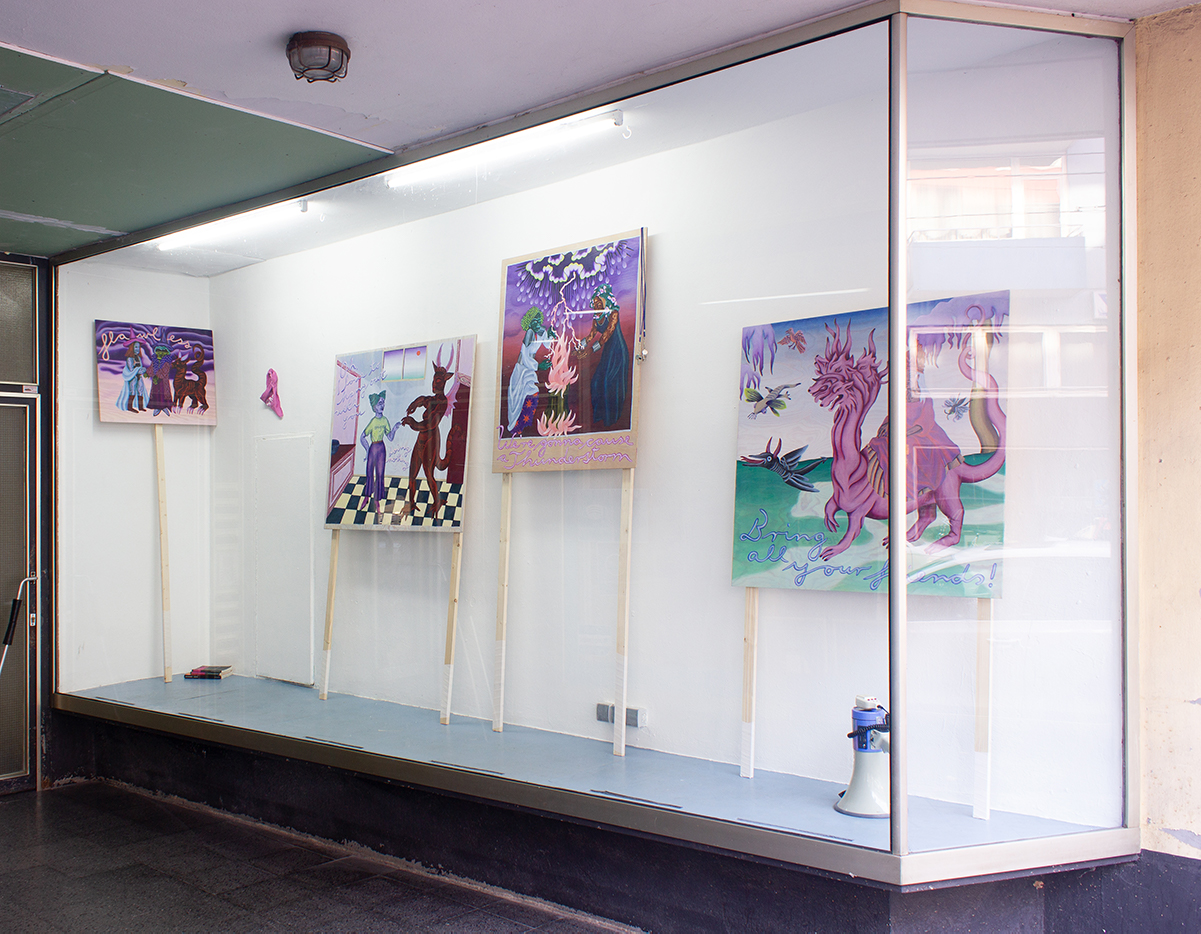 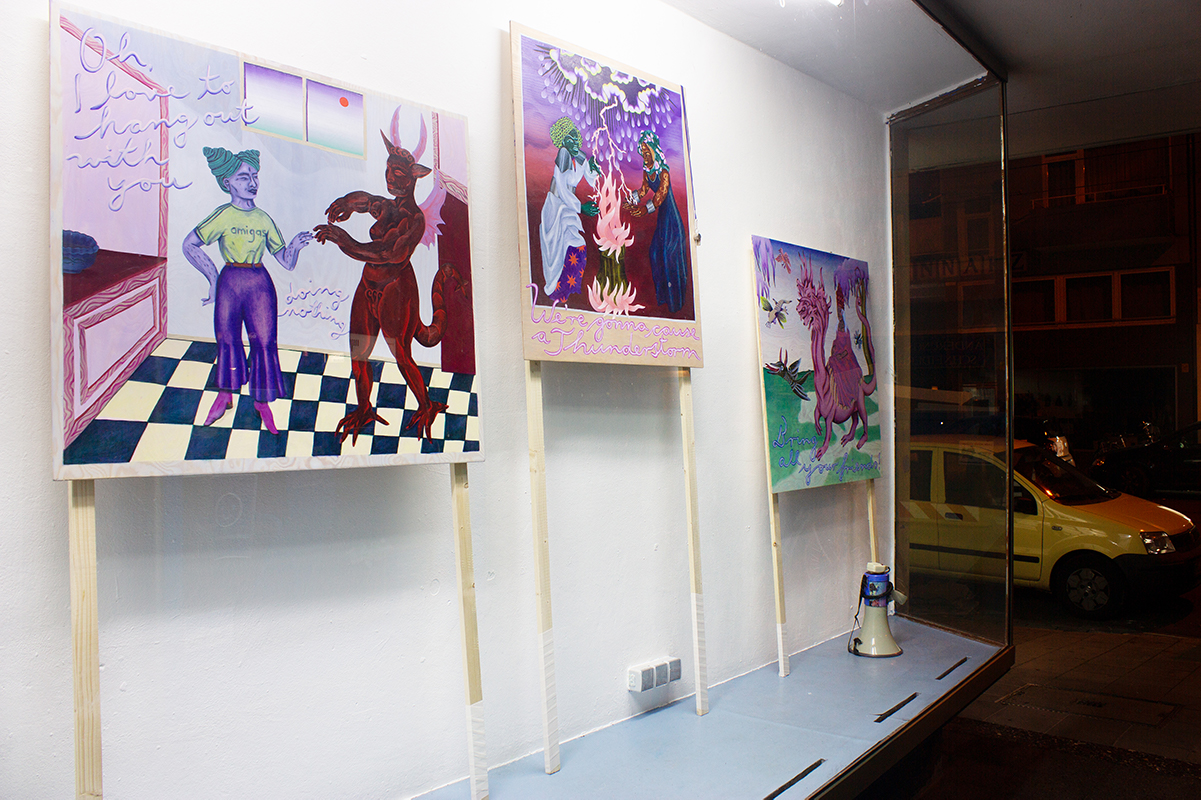 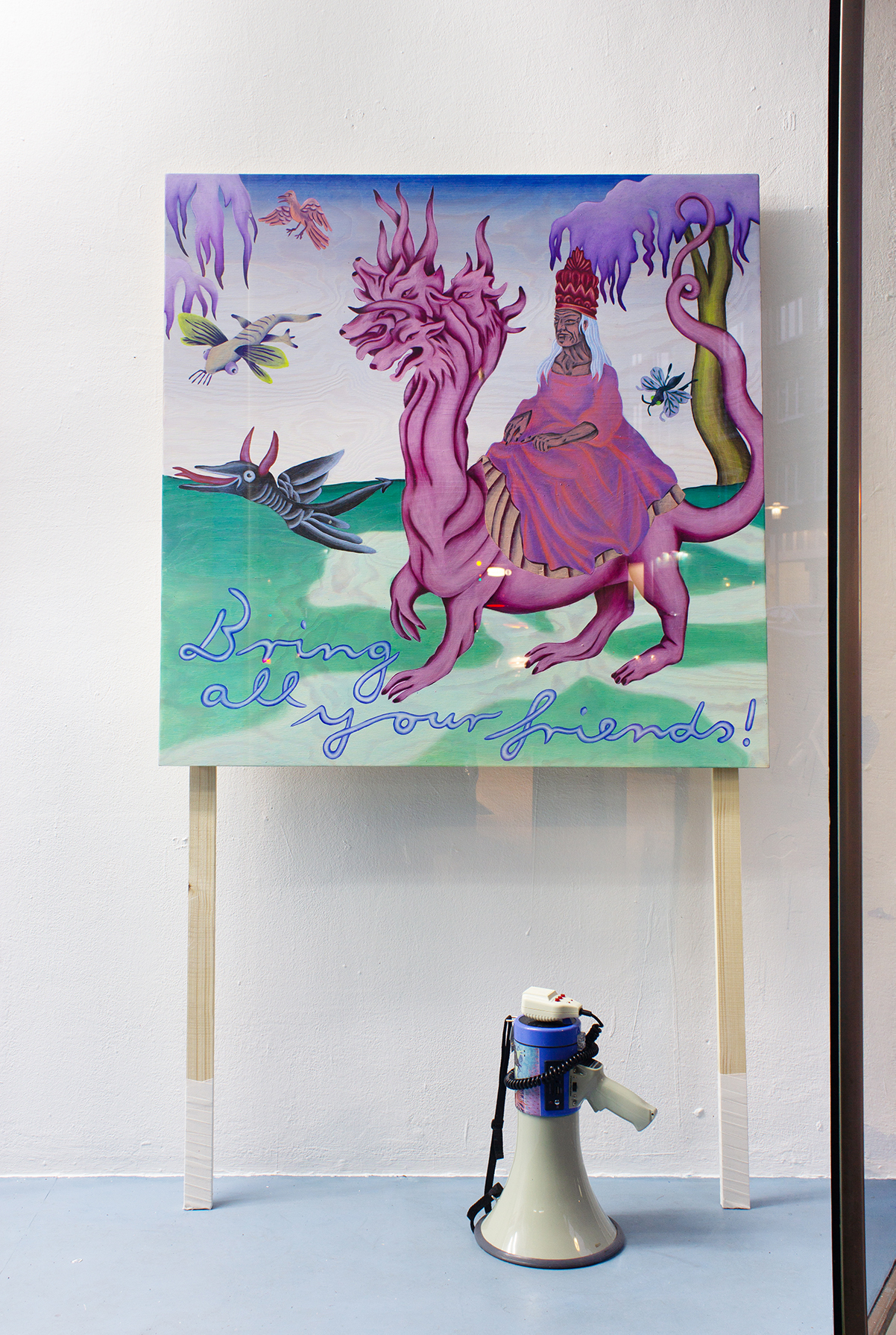 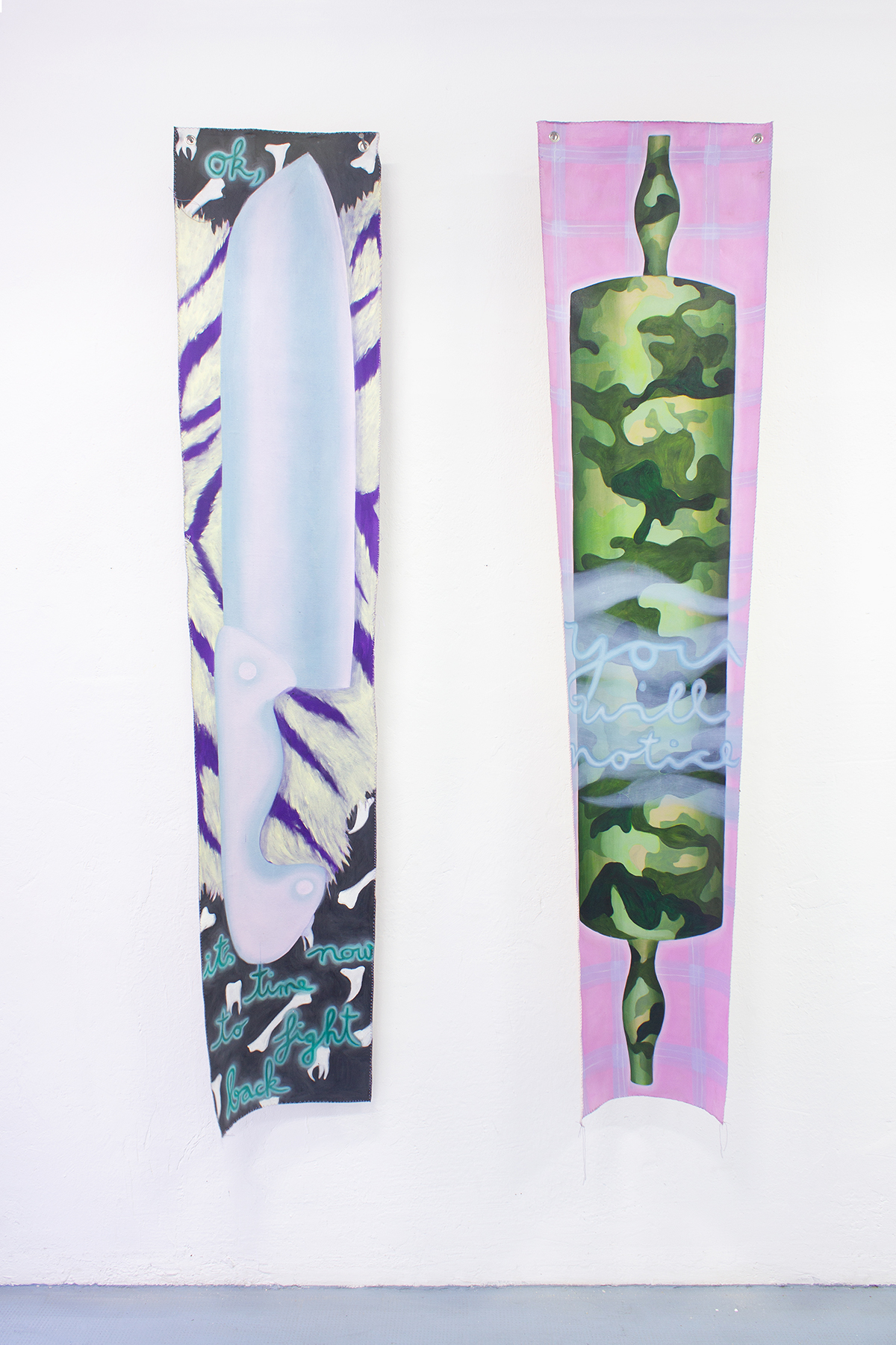 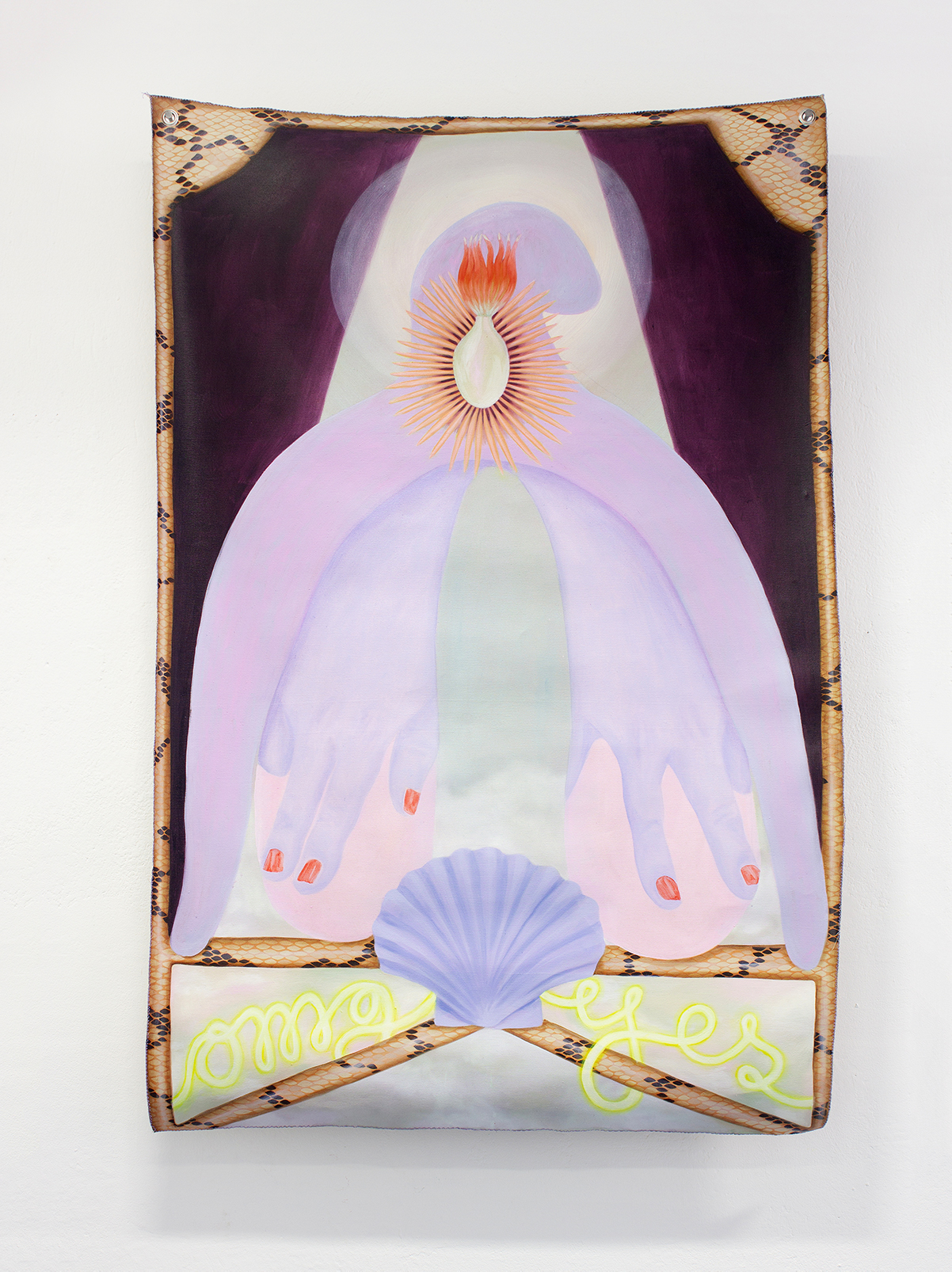