I heard this text in dreams. It was the first time I was dictated a text per somnia. In the morning, I lost most of it. Only remained these two strange sentences: “I know you. You know me”. Some archaeologists had written that prehistoric cave paintings could have been made as attempts to render the hallucinations one has while lying at this exact moment in between consciousness and sleep. Do dreams have an origin? Did someone one day wake up and for the first time thought he had a dream? Did you know that the Runa people from Amazonia predict the future while watching their dogs dreaming at night? There, one touches at something that reverses time,

that connects the unknowable, the future with something so ancient that it even might have no origin. This is advanced technique. Meditation is a technology, a technology of the mind. Drug is a technology, a technology of pleasure. It creates new feelings, new affections, new knowledge. Your paintings are technologies. They have this psychotropic effect. They have this power that freezes the gaze, they resonate in the mind and take over one’s all body. They stop the time. They are loaded with so much time themselves, that they act like blocks of time.

Your paintings have this depth, made out of the uncountable number of layers of oil that you apply on the canvas, that make them, in a way, the opposite of pictures. Your paintings are everything but captures that you can embrace in a single look. They are composed in reverse, as the forms you see first were in fact, sometimes, made in the beginning of the process. Looking at your paintings, one becomes an archaeologist following
traces and formations onto a vast abstract landscape in which one gets immediately lost. Sharpness plays with blurriness, the point can’t be made, as if you’ve built a special lens in the mind of the viewer, a device that focuses and unfocuses constantly, placing the eye in unstoppable movement, like in altered state, in paradoxical sleep, while being awake. Watching your painting is like seeing blurred, seeing double, seeing multiplied, until the point when it seems impossible to count how many things are seen in the meantime, a supposedly infinity of things seen at the same moment. Yes, your paintings have this paradoxical power that make you see things by trouble: their visual power in lies in the ability of disempowering vision.

Time flows in your paintings like a substance, like pure time constantly divided, that goes in many directions at the same moment. Intensities irrigate the texture through different temperatures and densities, like energy arcs that connect, electrify, energize the object. The surface, like seas of colors on which the mind surfs is so thin, and the frames are also so thin that it makes the paintings like images of vital waves, like maps of a seismographic take on the world. They are also so much to do with music and this highly abstract places that you once mentioned, and that make them everything but objects. It might not be a contradiction in the sense that you compose them while following where the painting itself makes you go, as if the weight of the paint, the tones of the colors, the vibration of matter produce this mass that moves and dissolves endlessly until the point where the painting says “stop” exactly like when in a concert of improvised music all the musicians stop playing at the same moment, intuitively knowing that silence has to arrive. Then, the listeners are waiting for this long and suspended seconds in the dark, in order to be sure that music came to an end.

Trying to decipher your paintings is like experiencing something comparable to this utopia of the never-ending sentence that I have been loving for a long time in some novelists’ prose, this crystalline web that waves until the point of pleasure that one would so intensely want it to never end. But your work really starts when language stops. And if your vocabulary is also made out of lines, spirals, inscriptions, both transparent and opaque at the same time, they compose other forms of sentences that defy meaning. Or more precisely, sentences that flow over meaning. They consume meaning while being read, like a magma that changes shape as one never knows where the painting is going to go. It places the viewer in the middle of a hilly terrain, plunges him into the melted strata of some unknown earth, made of a bristly, accidental, always reversing geology of language.

Gilles Deleuze once wrote that there are two ways of envisaging affects. The first one is kinetic, the second is dynamic. He mentions the manner we experience the rain: in the kinetic way, we could move one part of our body in order to protect the other part of it; in the dynamic way, we could welcome the rain by unfolding our bodies and feel the drops like thousands of little knives that affect us at every place at the same time. The works that are shown at The Sunday Painter, paintings that you have scaled according to the size of the gallery, are not only imposing panoramic surfaces that immerse us in fields of vibrations, colors and lights. They are not only panels that fit the architecture in order to master it, make us lose our marks, and allow these subtle tensions in between this immense beauty and this stormy violence. They actually make me think of three large bodies that flourish in different directions in order to welcome this affection. They are like silent machines for perception that rise up, and grow, and record the feelings coming from the weather, your inner weather. They are like wide screens that relate to our own bodies for us to project on them and be projected as well.

We unfold.
We are exposed. We see blurred.

Tears flowing in our eyes. Visionary washing of the gaze. Becoming perceivers anew. 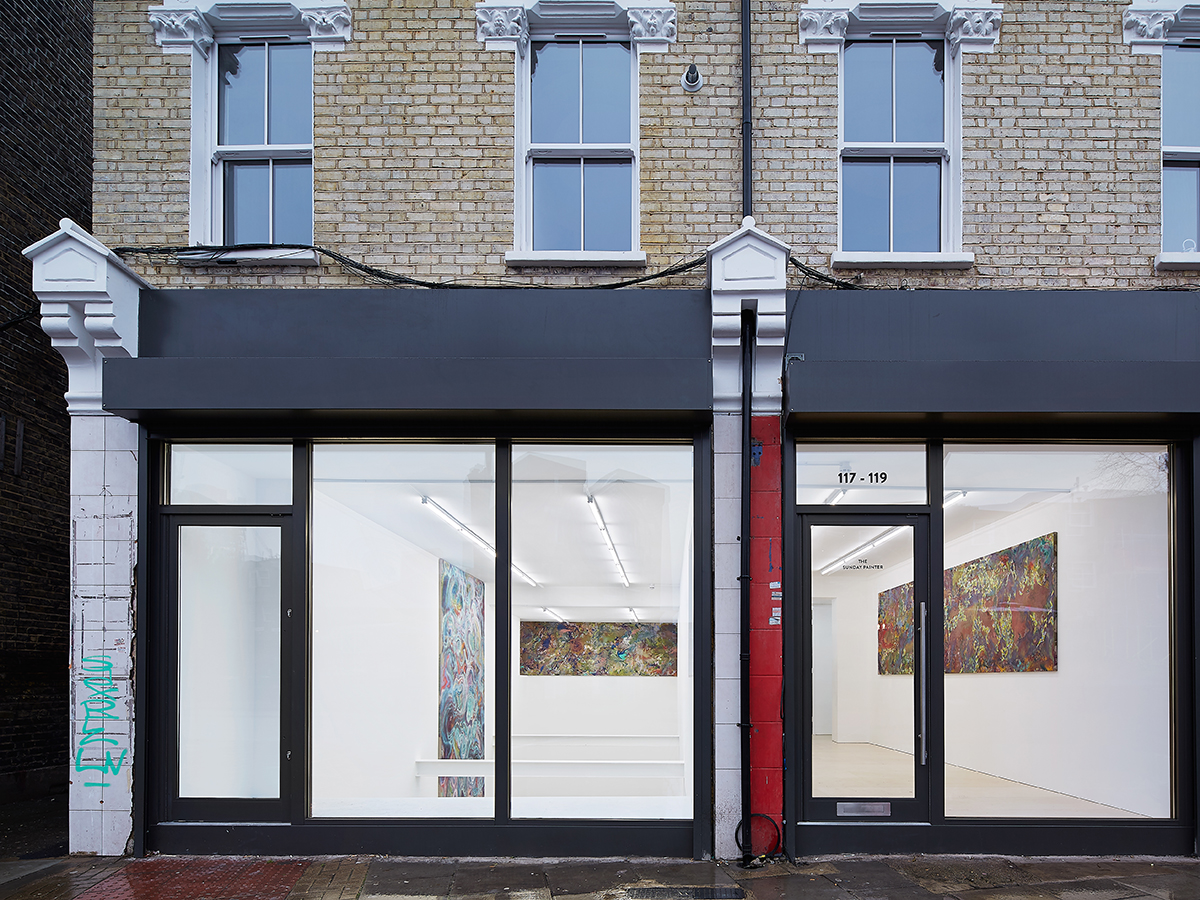 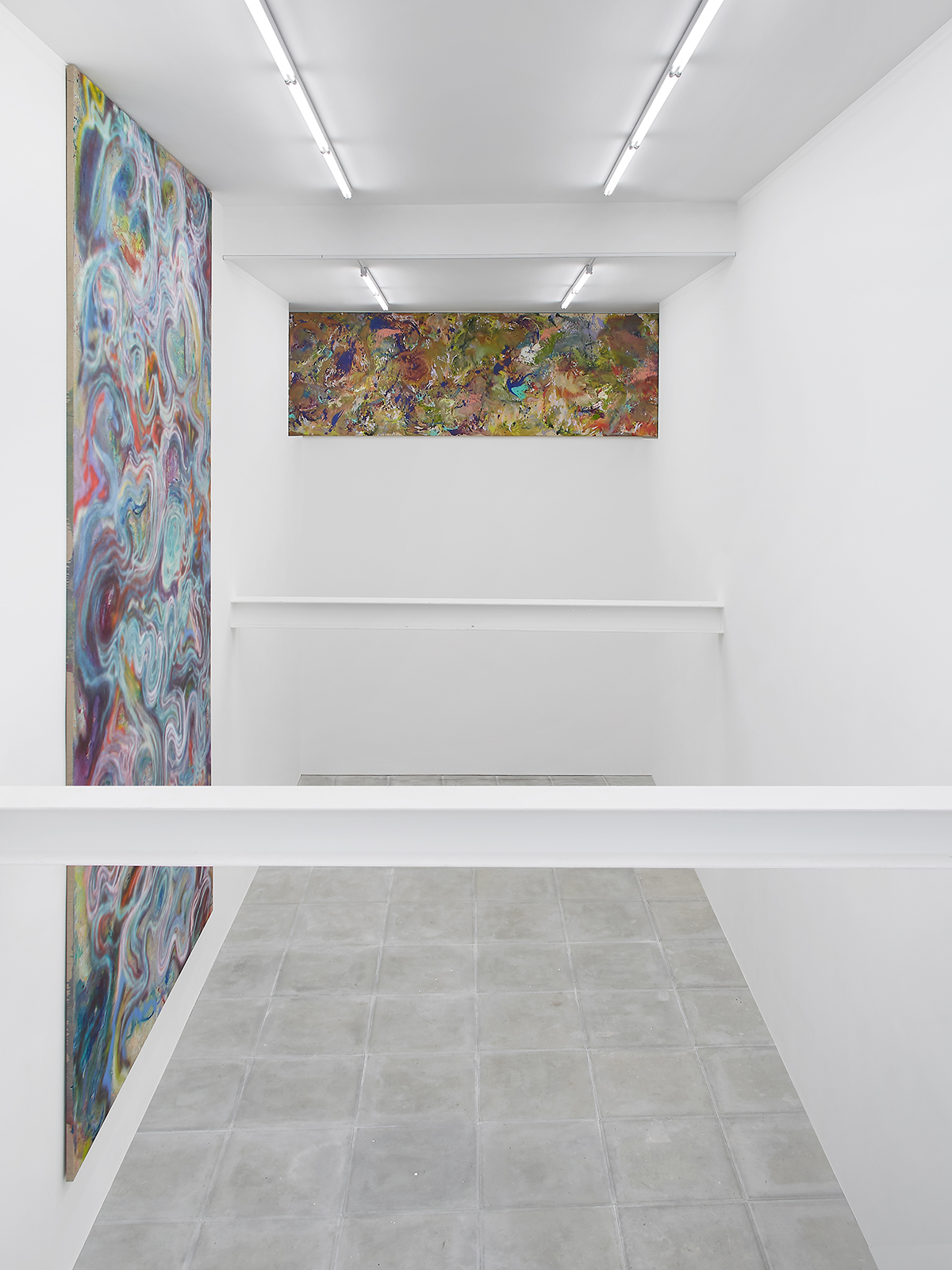 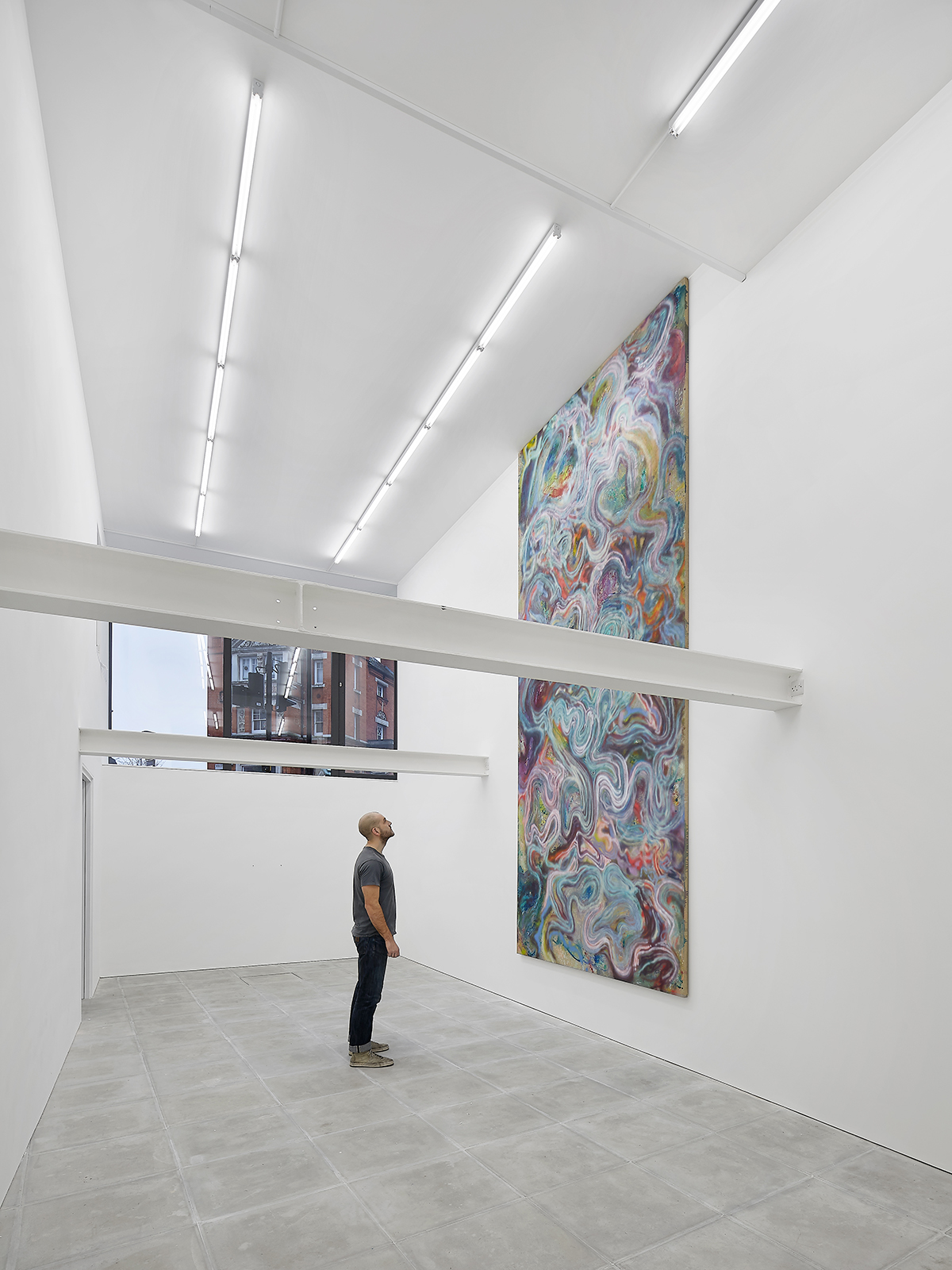 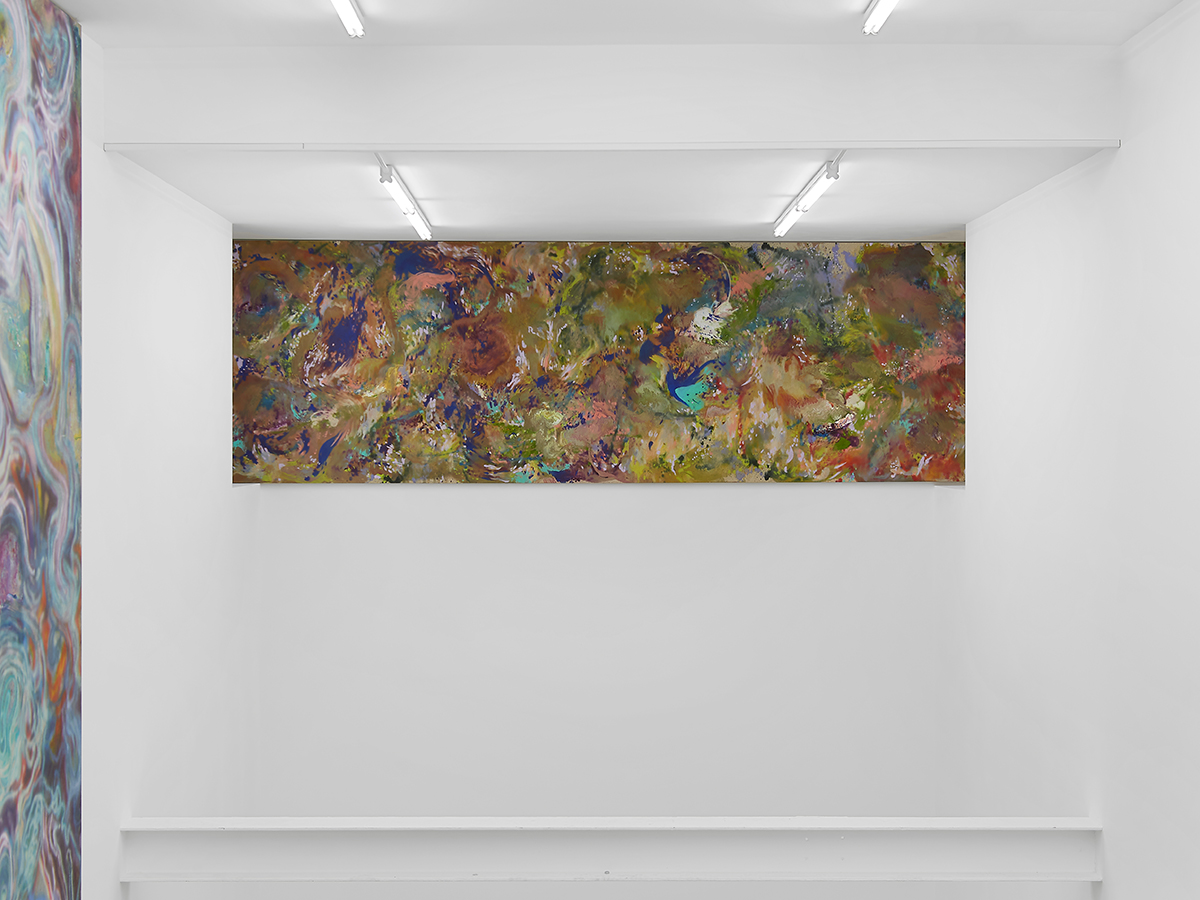 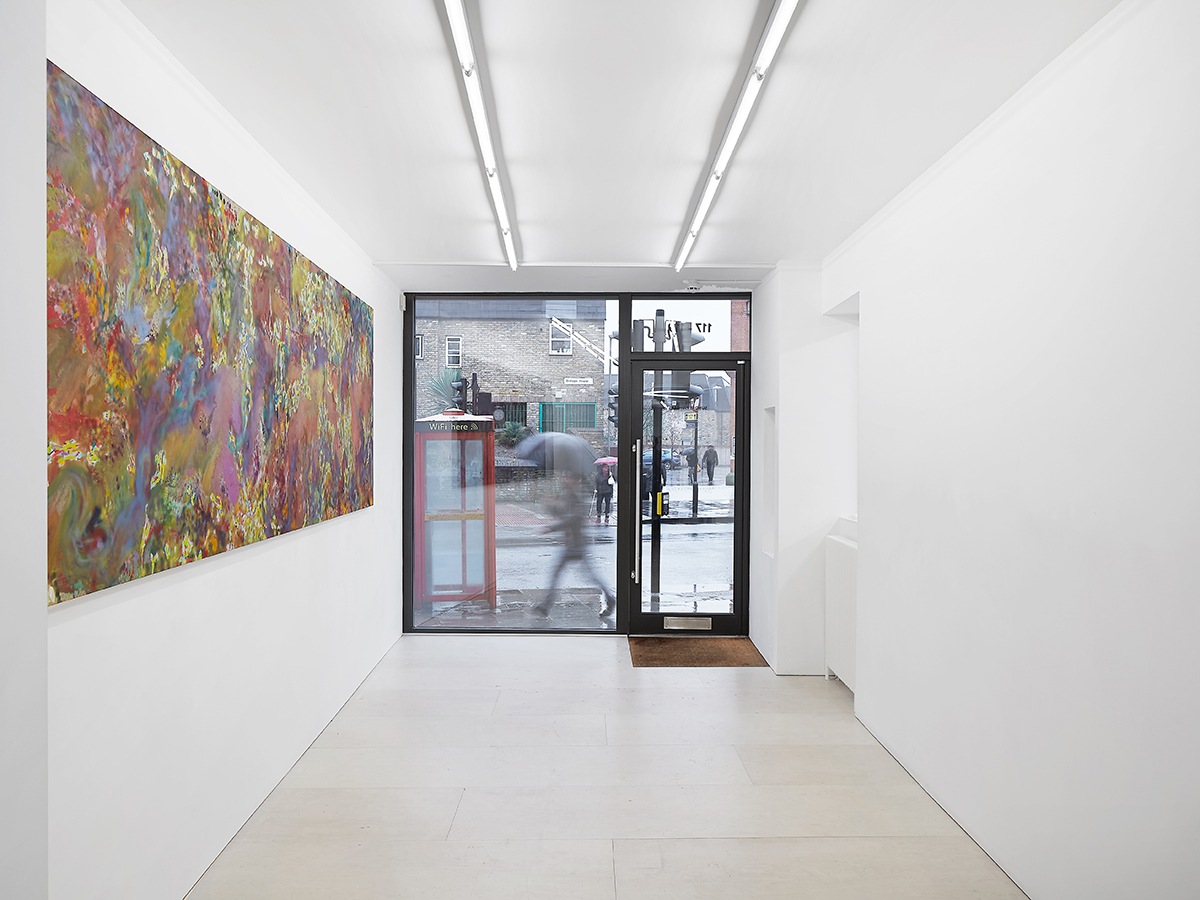 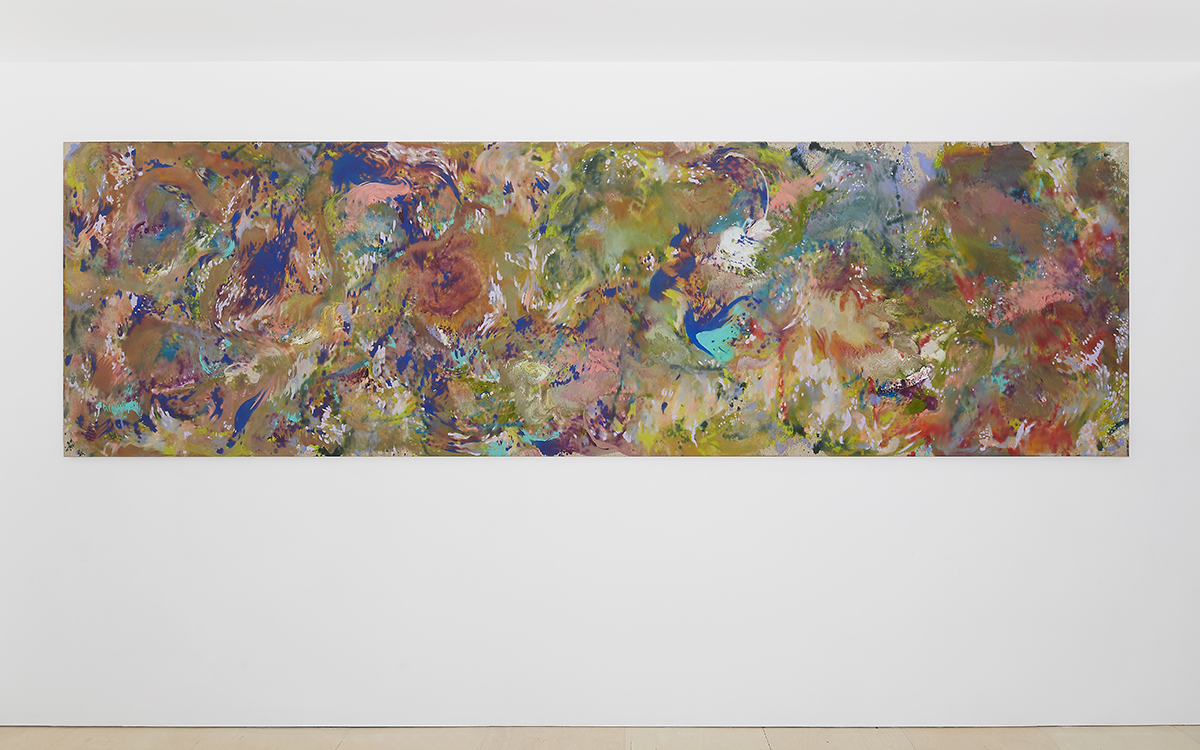 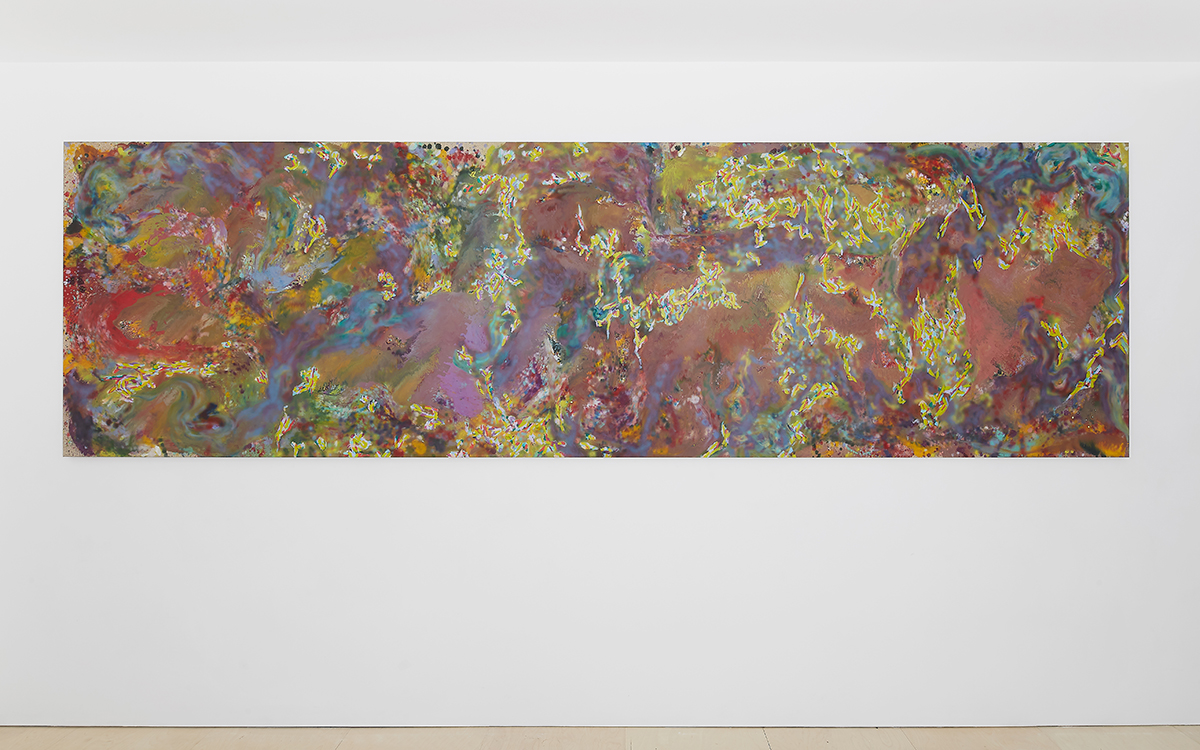 All photos by Ollie Hammick