In the work of Agnes Scherer (*1985), the operettas that she has been developing since 2015, occupy a unique position. Her unusual performance-formats draw inspiration from basal theatre forms such as processions, the mechanical theatres of the Baroque period, and even from the form of PowerPoint presentations. Thereby, Scherer is interested in possibilities of liberating the work of art from the status of the passive object, and giving it a heightened agency. At the center of «The Teacher» stands a teacher figure, which is controlled by a student – performed by Soya Arakawa – laying on the floor, using his feet to control the figure by employing some quite formidable effort. The teacher is thus placed in a didactic frenzy, a kind of hectic dance that sometimes seems monstrous, sometimes seductive. His lessons are illustrated by large diagrams that fall to the floor in short intervals, in order to reveal something new over and over again. What the teacher presents sounds impressive and true but in fact, contradicts itself. The text, which is closely interwoven with Tobias Textor’s rapid percussion, consists of aphorisms that Scherer was partly told by authorities and partly wrote herself. Together, the texts analyse and demonstrate the rhetorical blueprint of so-called wisdoms and their manipulative potential.

The concluding lesson, “The greater is the lesser and the lesser is the greater” seems to claim that in reality, there are opposing (power-)relations which exist a priori to those who are visible; logical if one considers that the teacher would be incapable of acting without the supporting function of the student. – Or, is it an insidiously constructed paradox, whose seductive anti-logic wants to convince the pupil to be satisfied while remaining in his powerless position? After this final lesson, the teacher disappears, leaving the pupil disoriented, longing for the return of his master. A colossal letter opens. Instead of the longed-for word of authority from afar, what emerges is a scene depicting futile waiting where the student, reclined on a sarcophagus, turns to stone while waiting. The content of the letter suggests that, in fact, no letter has ever arrived. Meanwhile, a stone replicate replaces the waiting and laying student, who can escape through a side hatch in the sarcophagus. In this final image, the artist opens up a space for in-between moments, which play out in unequal relationships. For example, the action of the student can be read as naivety that exists in order to accept power relations. At the same time, though, the scene also reflects the ambivalent longing toward wanting to be at home in a teaching, while, in equal measure, emancipating oneself from it. The master-student-relationship, which in «The Teacher» is embodied by men, refers back to the history of authority, which as a social principle of order and relationship is male. The fact that a woman transmits the patriarchal speech-act – the logos – causes a refraction through which a critical distance is created.

The twelve large paintings that accompany the lessons are playing with the genre of the diagram. The depicted arrangement of objects and pictorial figures seem to illustrate causalities and conditional relationships. However, this communicative character, which invites us to understand, is counteracted by a compositional unity containing fantastical landscapes. In analogy to the texts with which they correspond, they evoke a sentiment of near comprehension. The image-finding process emerges from a longstanding practice of elaborated pencil drawings, which is illustrated by a series exhibited on the upper floor of the Cabaret Voltaire. Stylistically, both, the paintings and the drawings combine, among other things, elements of the Middle Ages with those of Surrealism from the 1960s and 1970s and testify to the broad spectrum of references with which the artist, who is also trained as an art historian, works. References include the medieval Voynich manuscript, which illustrates botanical, anatomical, and astronomical contexts, and the psychedelic comic book Codex Seraphinianus (1981), which is based on the Voynich manuscript in its encyclopaedic approach.

With regard to the historical legacy of the Cabaret Voltaire, Scherer’s work connects in many ways to the site. By bringing together paintings, puppetry, sculpture, stagecraft, music and text, the artist continues the tradition of the Gesamtkunstwerk. Yet, Scherer also touches on other core themes of the Dada Zurich: She illustrates and distorts authoritarian relationships, whether it be through language, gestures or visual mediation. The didactic recognises itself ludicrously.

At Cabaret Voltaire, the installation accompanying the operetta will be on display for the entire duration of the exhibition. At the opening on October 2, at the matinée on October 3, and by the end of the exhibition, Agnes Scherer will enliven the production collaborating with Tobias Textor (musician/Berlin), Soya Arakawa (performer/Düsseldorf) and Claudia Barth (performer and activist/Zurich). In addition to the exhibition on the ground floor, a series of large-scale pencil drawings by the artist, spanning the years 2017-2019, is also on display on the upper floor.

«The Teacher» was shown for the first time in April/May 2019 at the Berlin project space Kinderhook & Caracas, curated by Sol Calero and Christopher Kline. 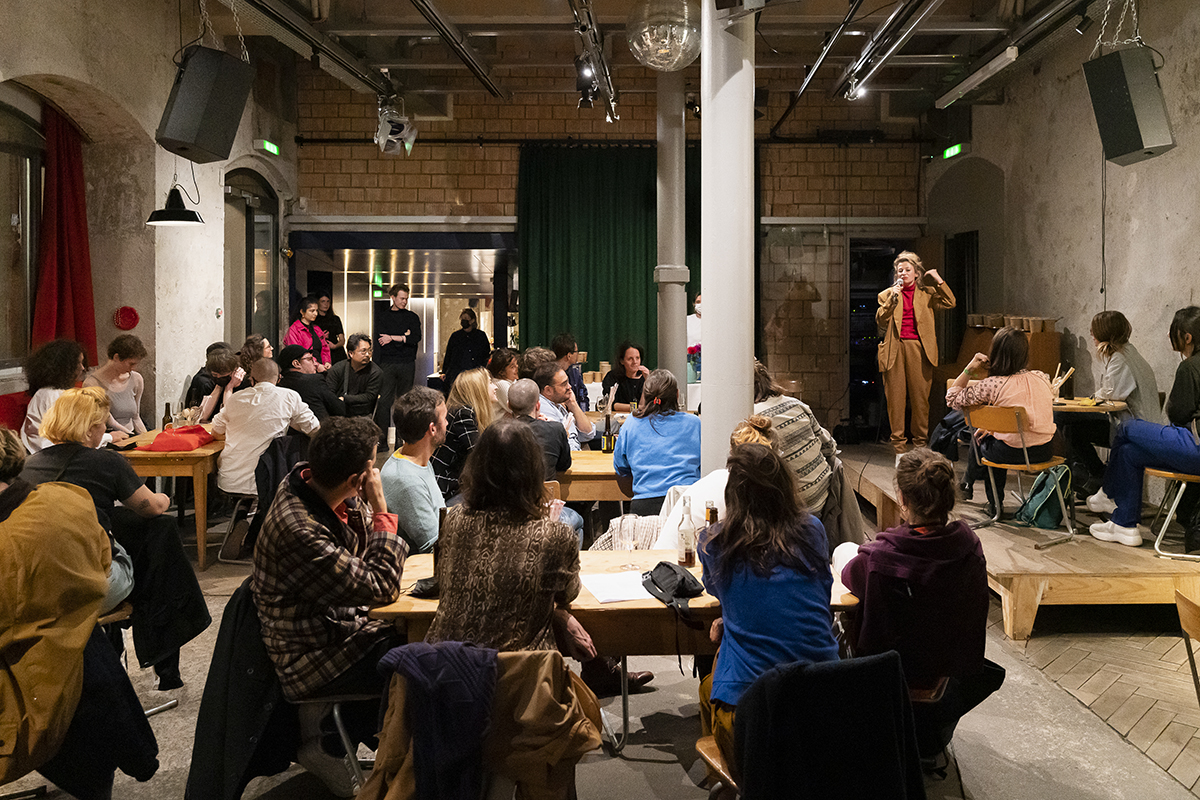 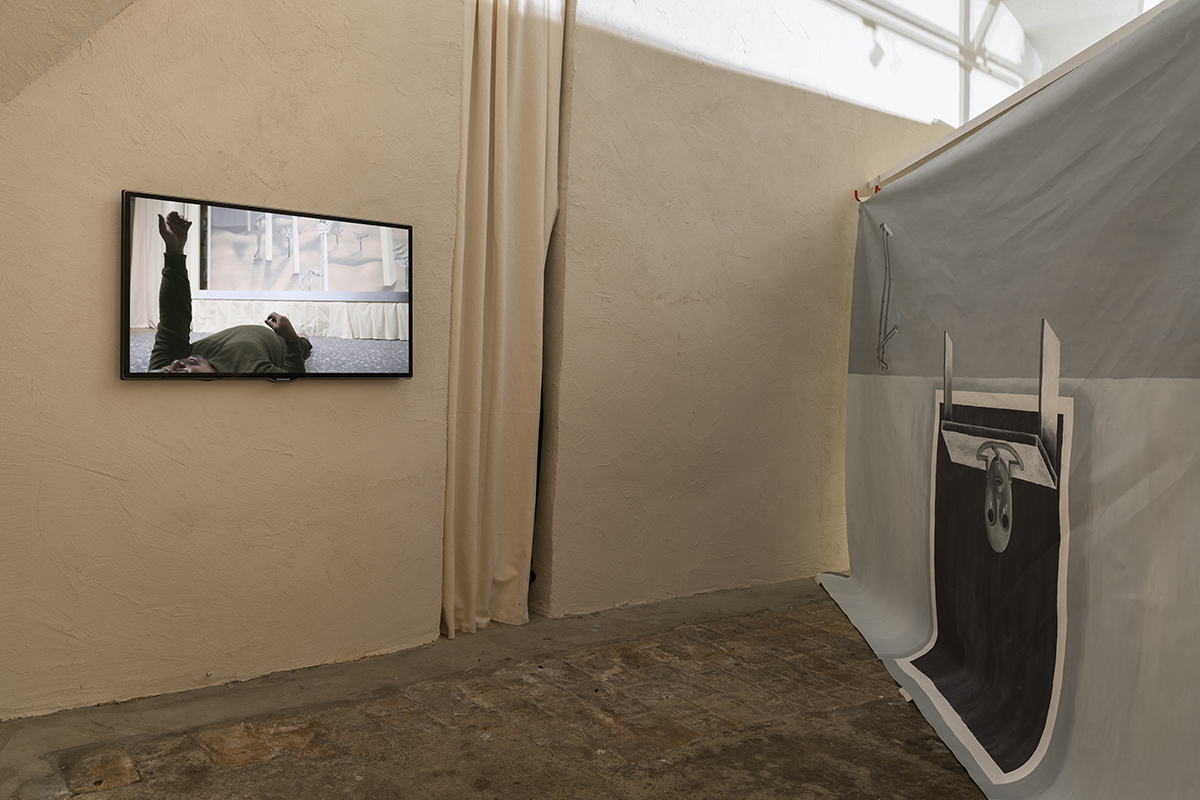 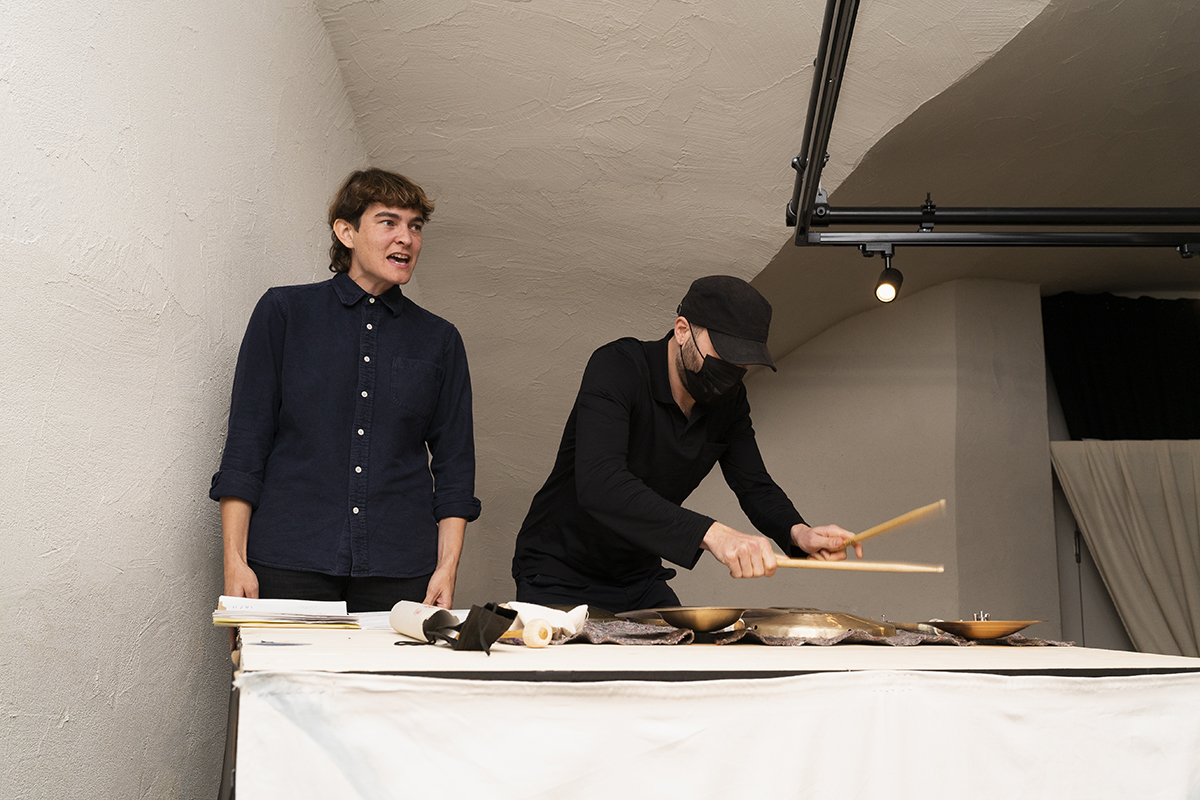 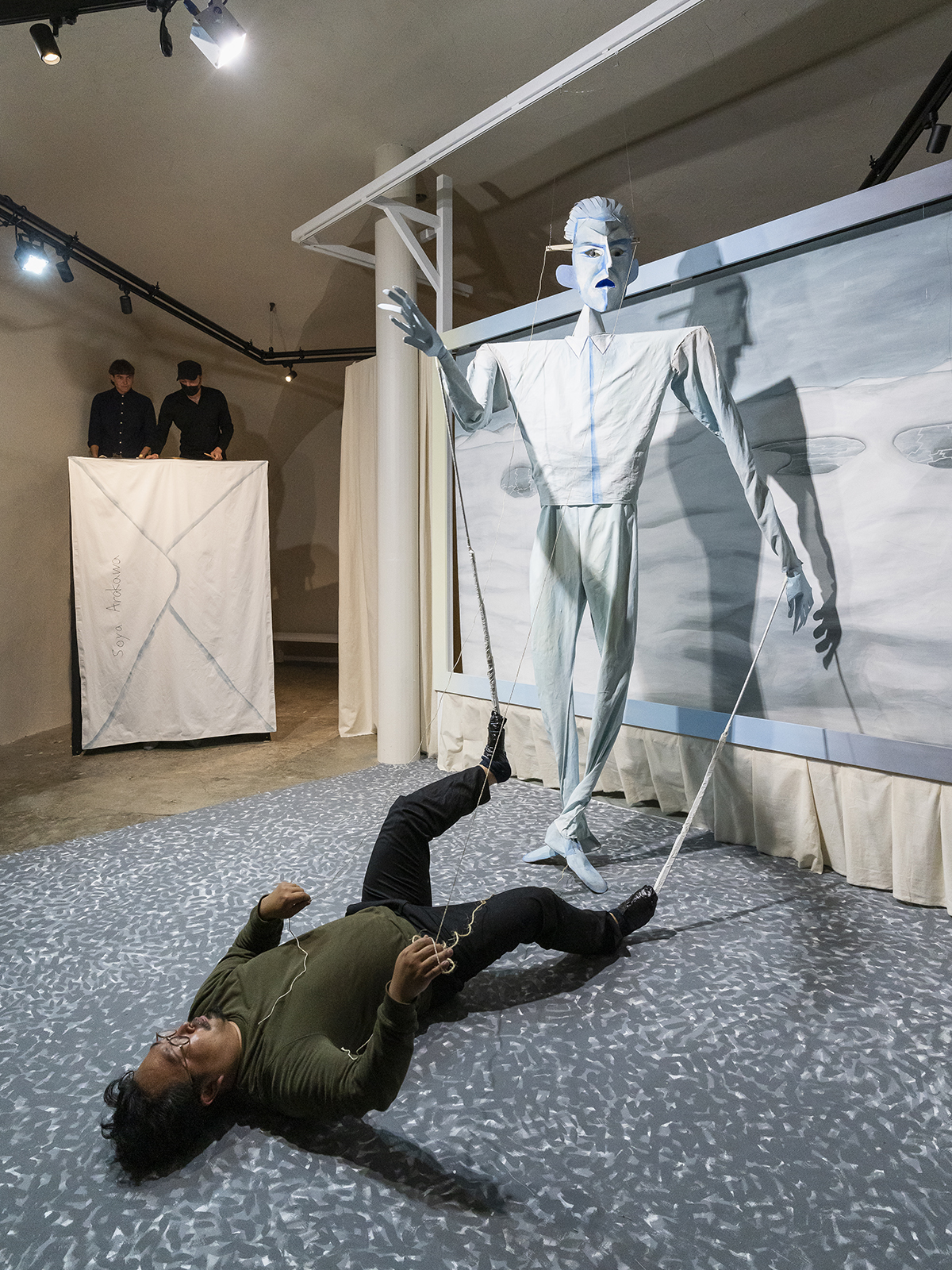 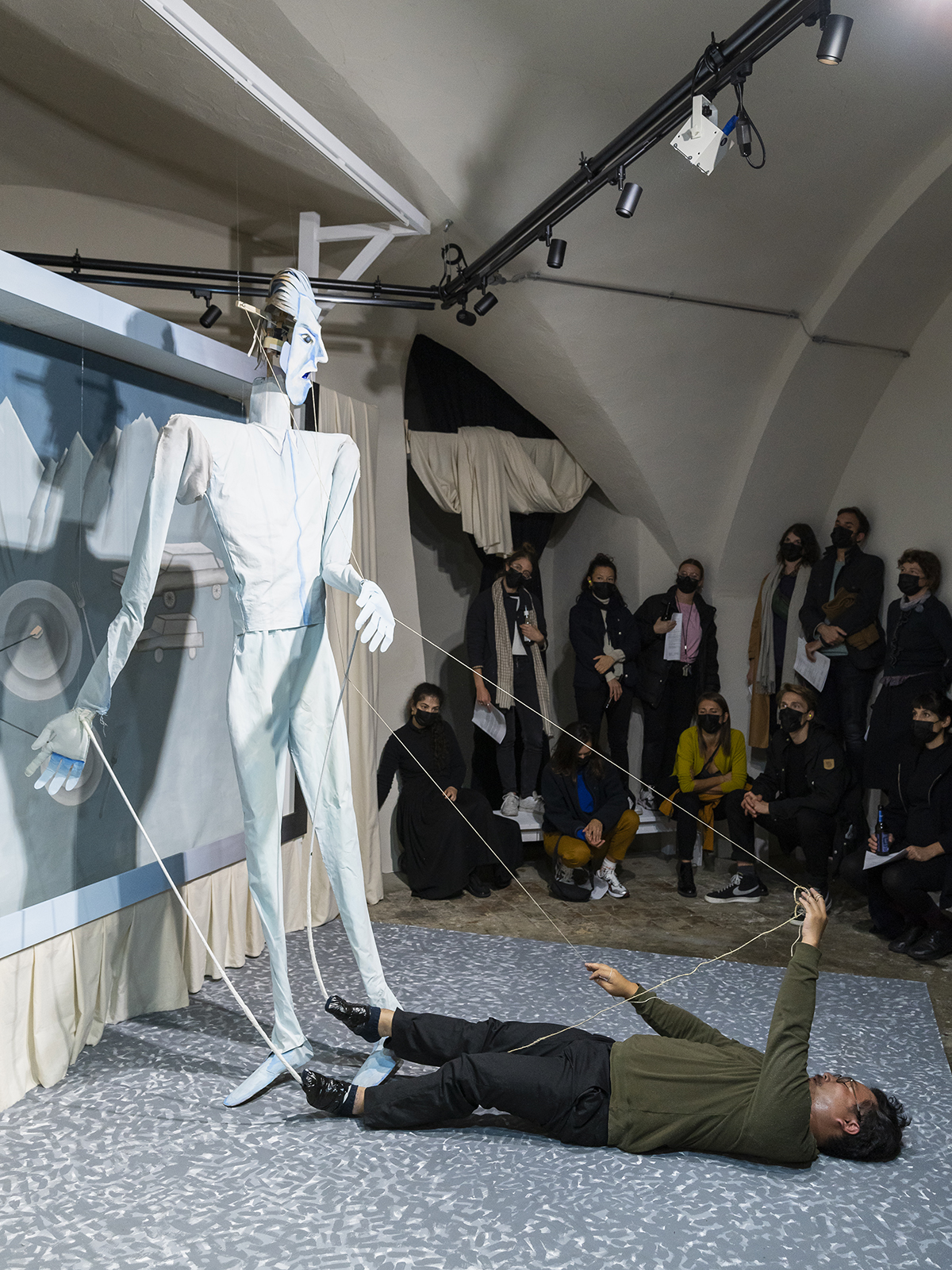 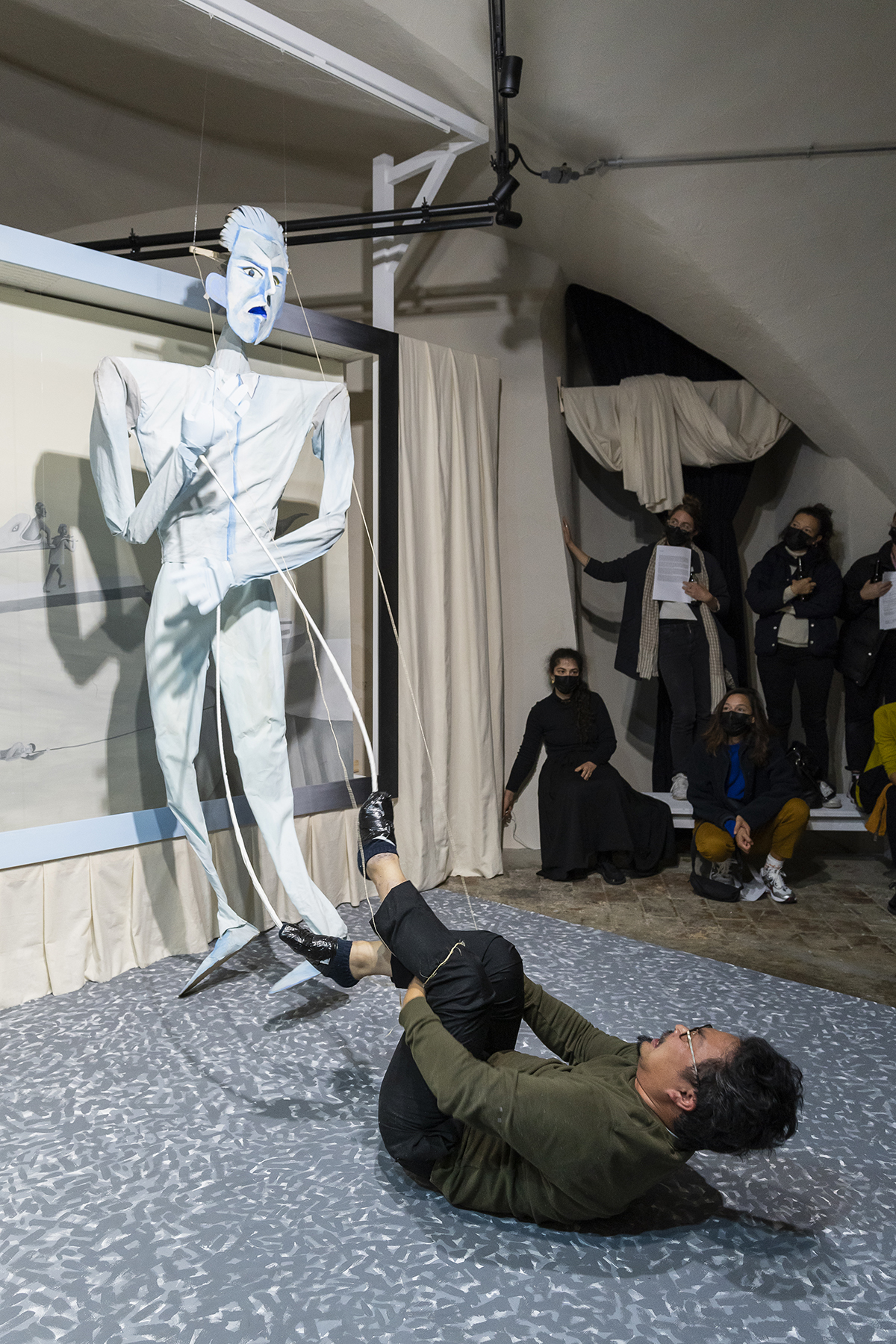 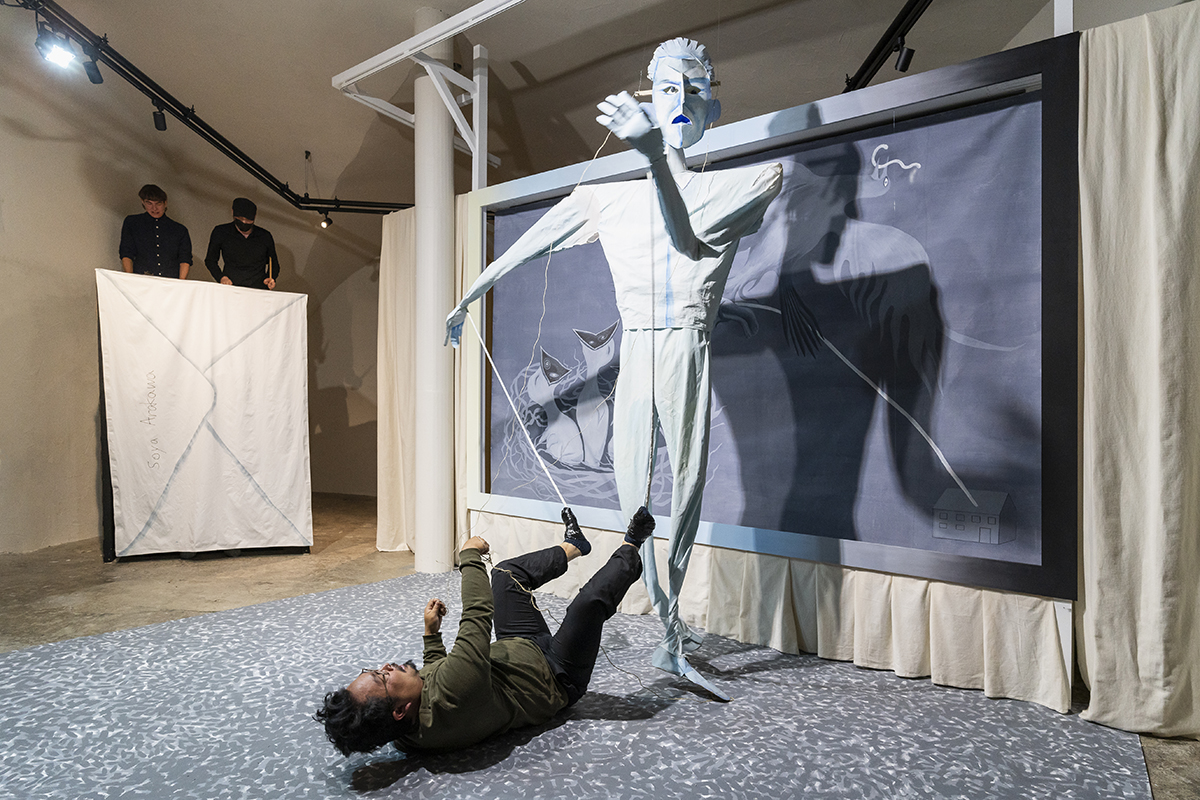 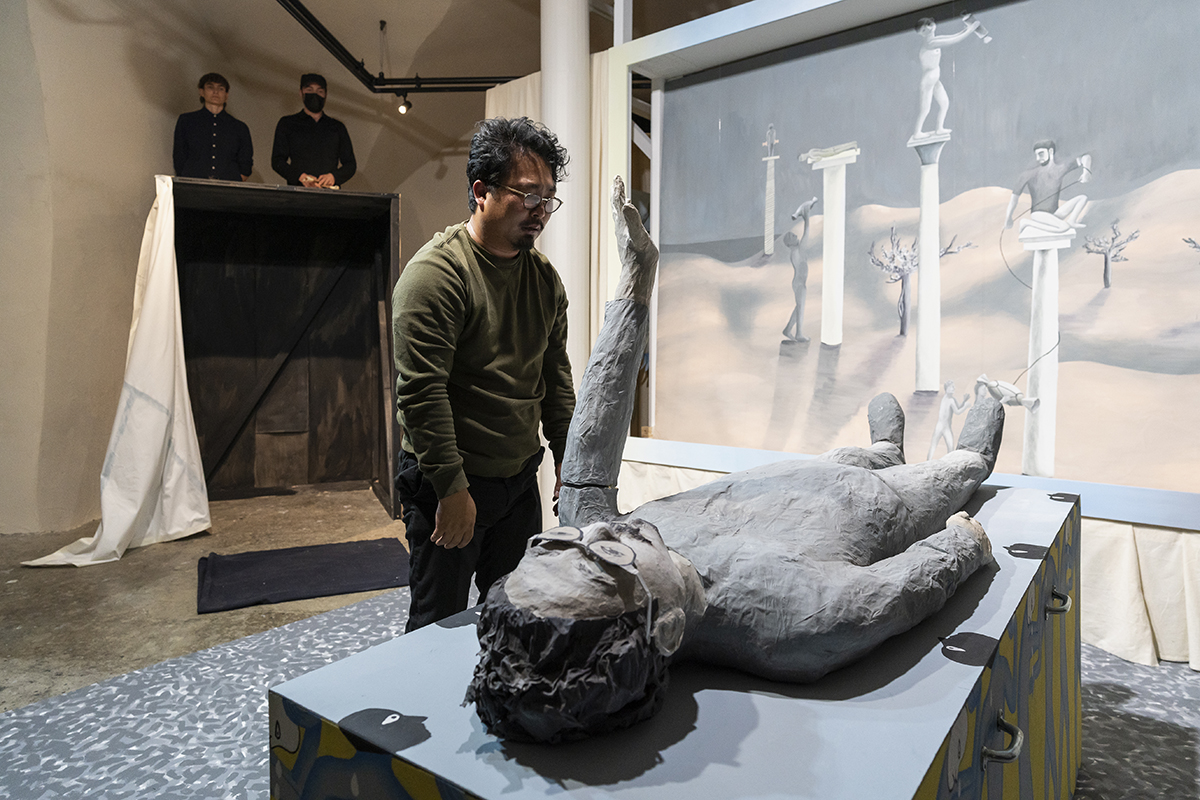 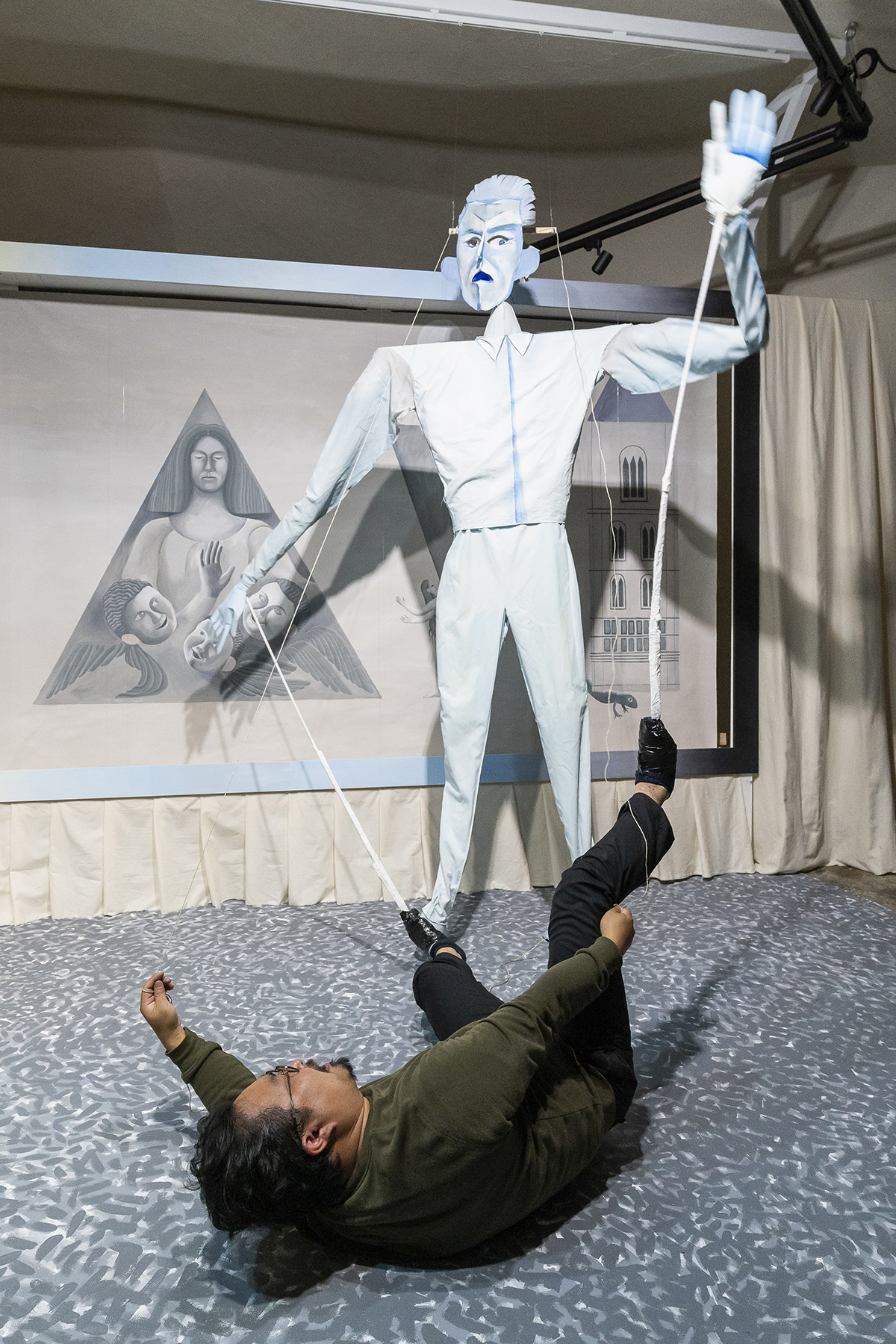 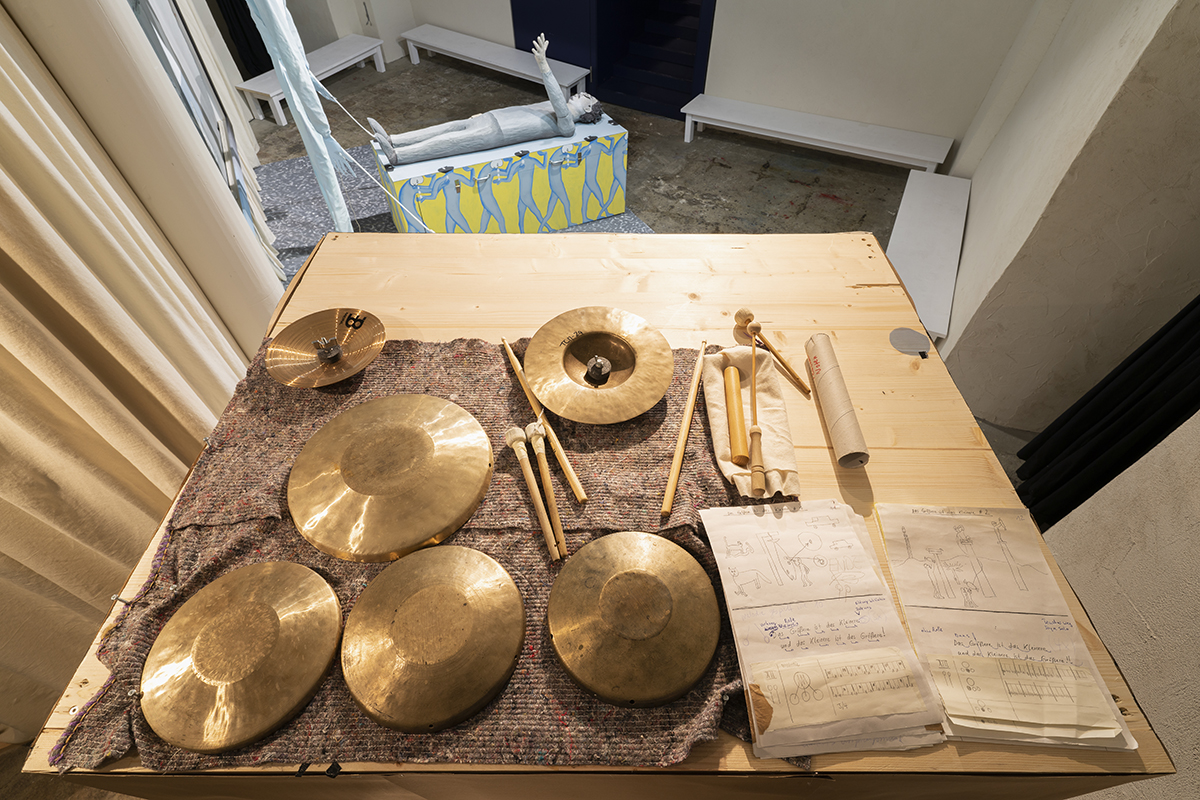 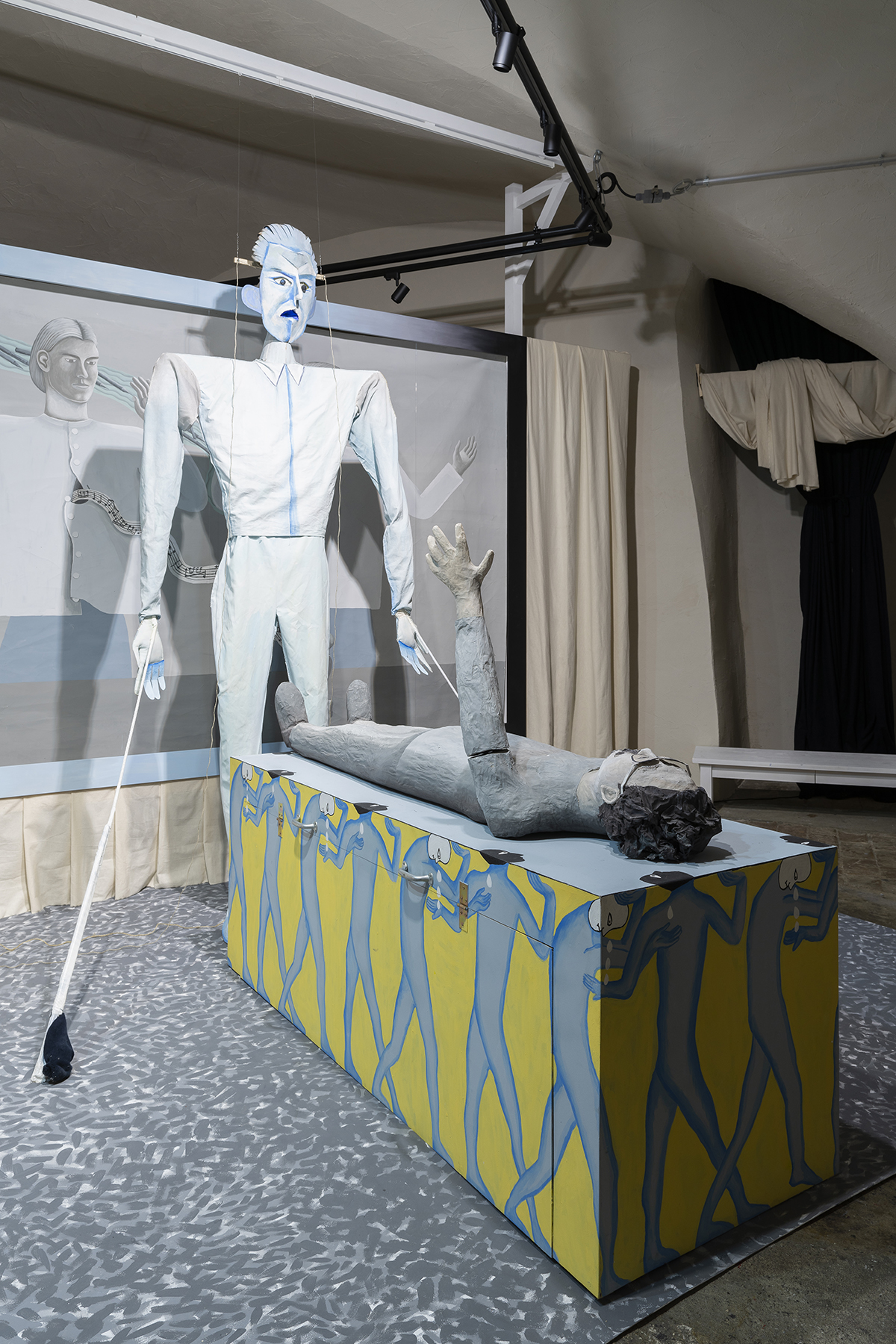 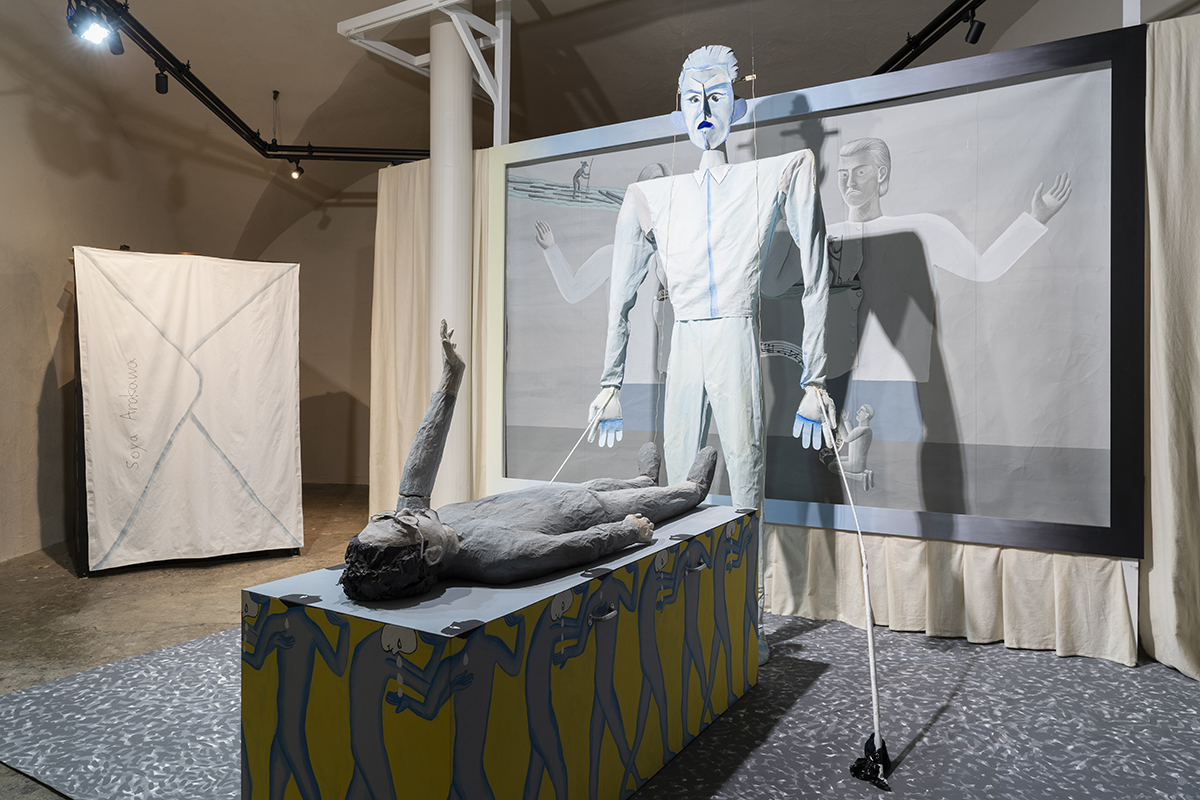 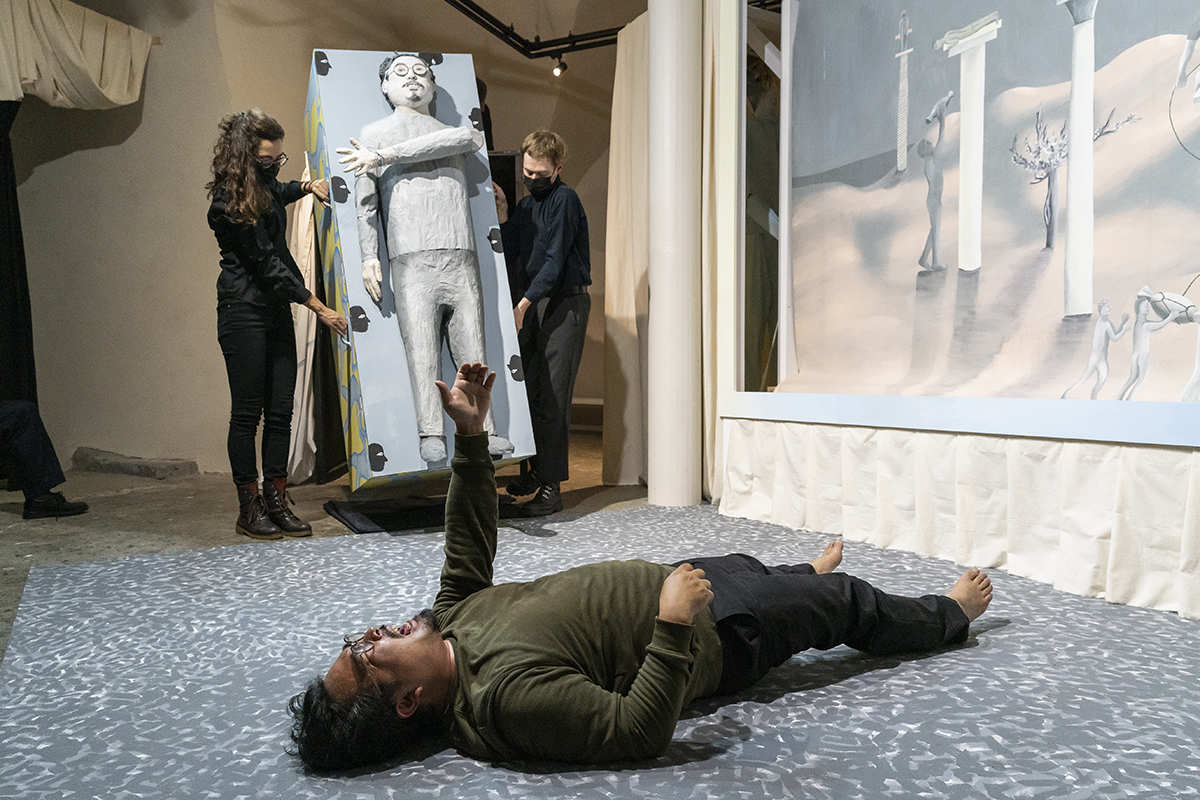 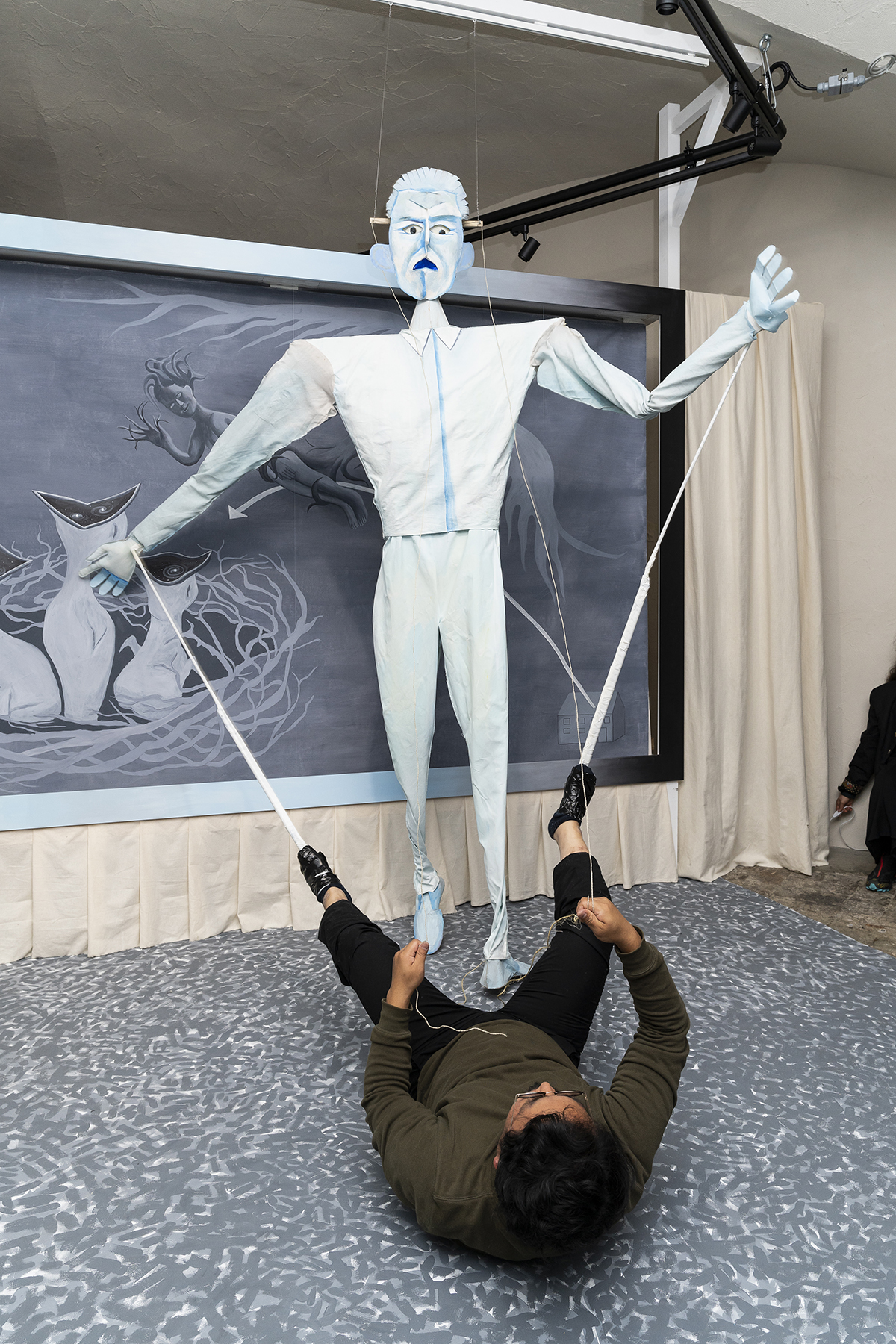 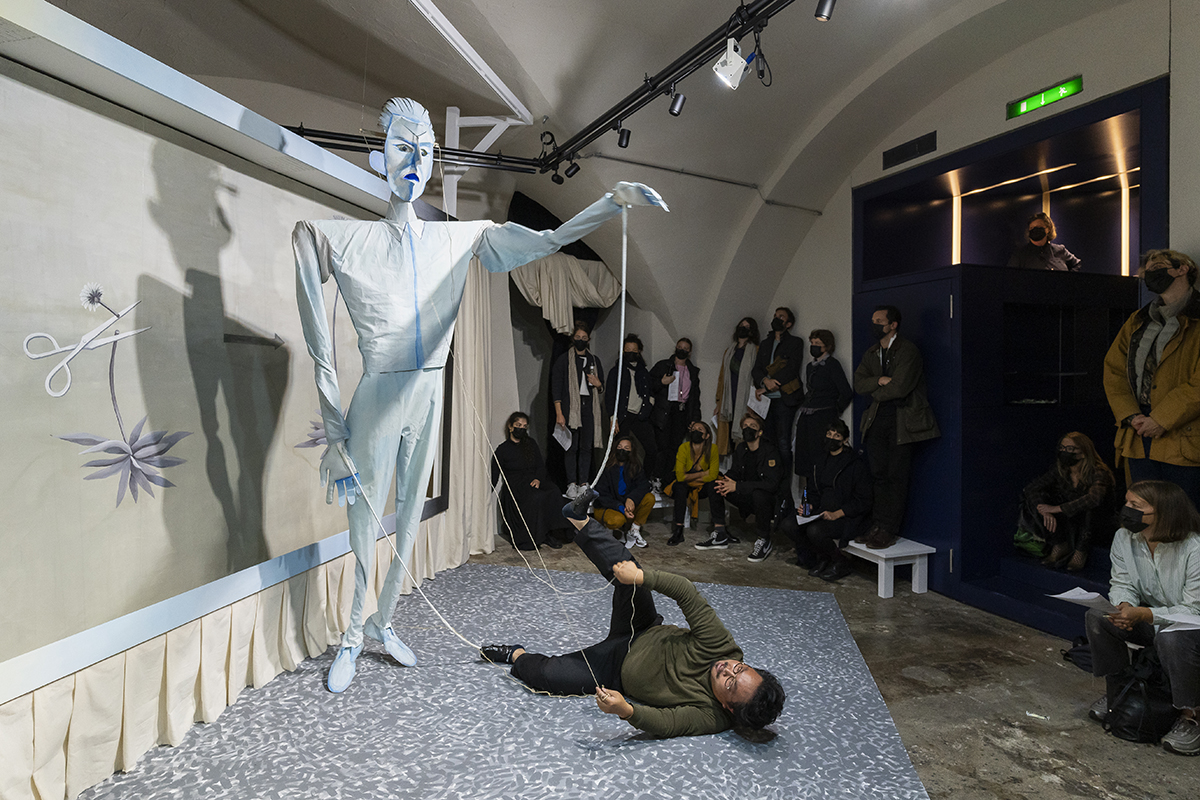