With great excitement, ChertLüdde is pleased to introduce Strings the Length of Our Palm’s Seal, an exhibition by Ozioma Onuzulike, a distinguished artist and intellectual figure whom we are honored to be showing for the first time in our gallery.

Realizing this exhibition has taken us through a long and varied journey across geographies, time, emotions and poetry. At the end of these lengths, findings and connections to topics of which the artist is neither shy nor passive towards bring unmistakable truths and insight into his oeuvre.

A ceramicist, poet and scholar, Onuzulike began his career as an artist at the University of Nigeria, Nsukka, where he is now a professor. His body of work re-conceptualizes traditional West African ceramic materials and techniques, applying them for purposes beyond the utilitarian craft of pottery and instead as tools for political resistance.

Strings the Length of Our Palm’s Seal displays large-scale works from his series composed of palm kernel shells, terracotta and stoneware – works in which the memories and traumas of past and present conflicts emerge. Focusing on clay as a natural raw material subjected to great pressure and burning, these works are the results of an irreversible process that serves as a metaphor for the outbreaks of war and destruction of natural resources. Dense with meaning and allusion, Onuzulike’s narrative is unified by the poetics of storytelling, a key element of construction in his work that explicitly references Igbo culture: characteristic lines drawn on traditional masks, along with curvilinear designs widely seen in the Igbo murals of southeastern Nigeria, as well as in the magisterially elaborate body paintings drawn on the skin for ceremonies. In his work, the artist extends the notion of lines as aesthetic and symbolic threads of continuity and connectivity, uniting historical and contemporary traditions with his research.

Prominent in the show are the painstakingly detailed garments of Extra-Large-Sized Jumper, 2022 and Agbada (“1,500 Brand”), 2022, made from palm kernels (the hard wooden shells of the oil palm seeds) and glazed ceramic beads. In West Africa, palm seeds have become a symbol of poverty; those found gathering them for food are immediately identified as hungry or needy. Onuzulike transforms signs of destitution into objects of wealth by giving them the appearance of high-ranking clothing, weaving them into the pattern of traditional West African

garb often worn today by wealthy Nigerian politicians and historically by the royal entourage. These works confront us with a role reversal in which symbols of lower socioeconomic status acquire a place and dignity denied in reality. The reaffirmation of this potential for social change is also in the very practice of producing these works, a collective effort that in itself can be seen as a symbolic motion of a social movement, uniting people in the common dream of redeeming and overthrowing the current order.

As the beads in Extra-Large-Sized Jumper and Agbada (“1,500 Brand”) are bound to a sinister past as a symbol of slavery, once used as currency in transactions, the ceramic yams in the work Burnt Yam Barn, 2022, remind us of the enslavement of millions, the sequential positioning of each yam mirroring the infamous images of the arrangement of people forced into the Atlantic trade. Burnt Yam Barn is also a direct metaphor for the youth of Africa, and how their development is subject to numerous external factors. Throughout West Africa, yam harvests function as records of each season, since the textures, size and surface qualities of the yams reflect the climate during the months of their growth, as well as whether there had been regional drought or flooding. In the case of the yams presented here, their burnt appearance suggests a severe drought, environmental conditions that blister and alter the morphology of the yam skins. As vessels charged with different yet interconnected connotations of past and present forms of exploitation, the yam barns testify to the act of “still learning new ways of telling old lies,” to quote one of the verses from Onuzulike’s poems.

Strings the Length of Our Palm’s Seal also presents works that are distant in time and intent but now find themselves intrinsically connected. Such is the case for the work AIDS to Africa, from a series started back in 1999, and the artist’s most recent series, The Honeycomb Project, started in 2020.

Located in the center of the exhibition space, AIDS to Africa is composed of jute bags, clay coins and sawdust. A double entendre, the title creates a comparison between the controversial notion of international aid and the AIDS epidemic. The problem or disillusionment with the idea of foreign aid is a topic of vast and complex debate, on which the artist takes a firm stance with this work. With astute criticism, he indicates how external support is nothing more than a layer of pretended values, an illusion that shows intention but hides interests. Beneath the surface lies the reality, part of which being that AIDS in Africa is one of the biggest humanitarian disasters of our time.

Pulling similar tensions from recent concerns, The Honeycomb Project is a series that speaks to our continuing state of emergency due to the Covid-19 pandemic. Onuzulike alludes in this series to the fragility of life and the resilience of the collective community by drawing analogies between the structures of bee hives and isolation quarters or intensive care units. With another emphasis on the significance of clothing, the artist compares the medical uniforms of healthcare workers to the protective gear worn against bees, in order to highlight the shared motive of preserving and nurturing life. Exhibited here in Berlin, the individual tiles making up the The Honeycomb Project also evoke a map, with lines of demarcation reminiscent of the dissection of Africa during the Berlin Conference of 1884, where the continent’s territories were delineated and divided among the Western nations.

With AIDS to Africa in close proximity to The Honeycomb Project, parallels between the two pandemics are drawn, opening themselves to questions about the different urgencies dictated by the disparity of the population at risk, by stigma and by discrimination.

Onuzulinke’s exhibition confronts us with our limitations and illusions. Creating a web that open towards much broader horizons, he creates relationships bound by the inherent linkages between many layers of our existence, with a sonority that reminds us of the strength of the human soul. 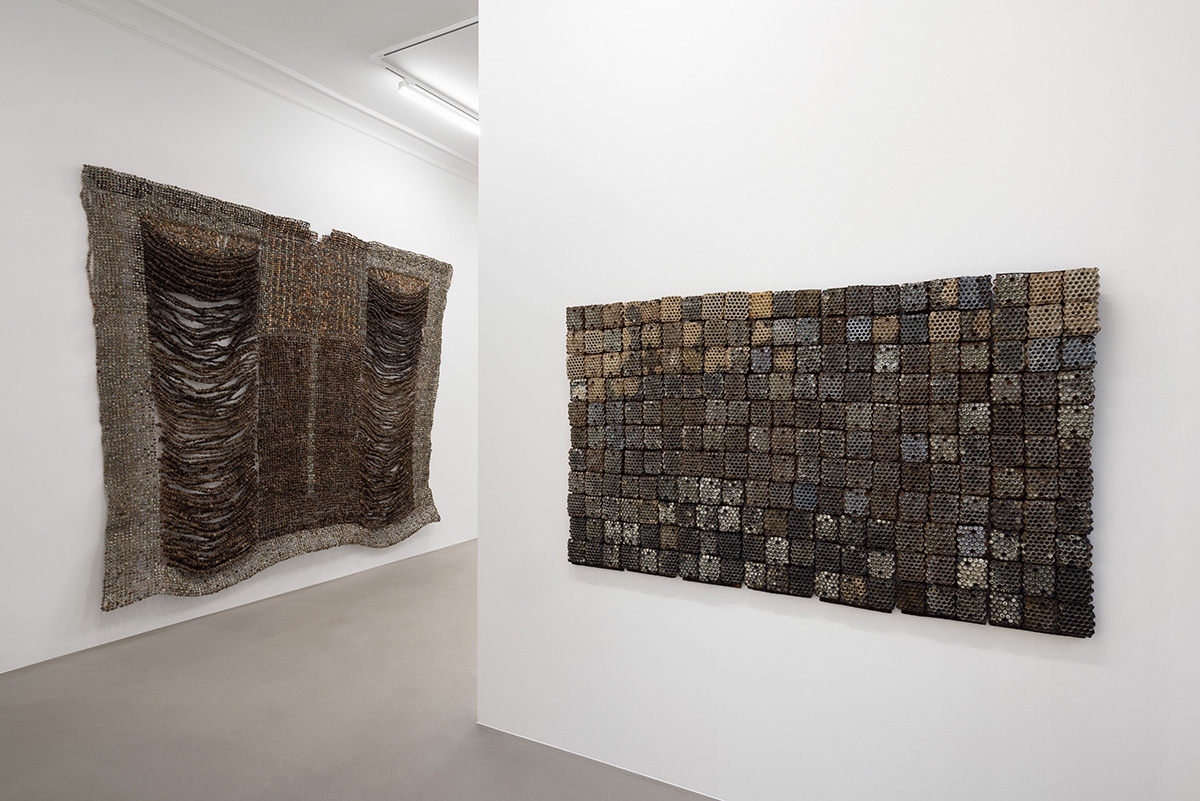 Installation view of Strings the Length of Our Palm’s Seal, ChertLüdde, Berlin, 2022 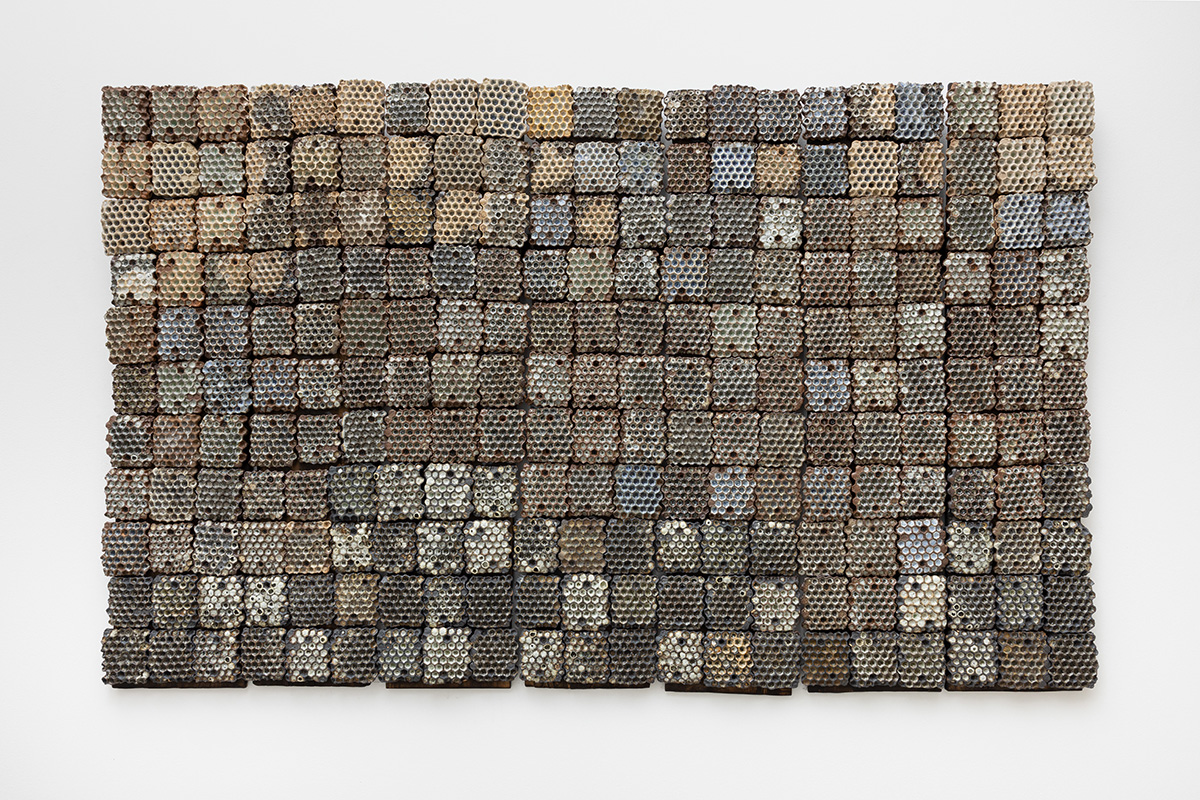 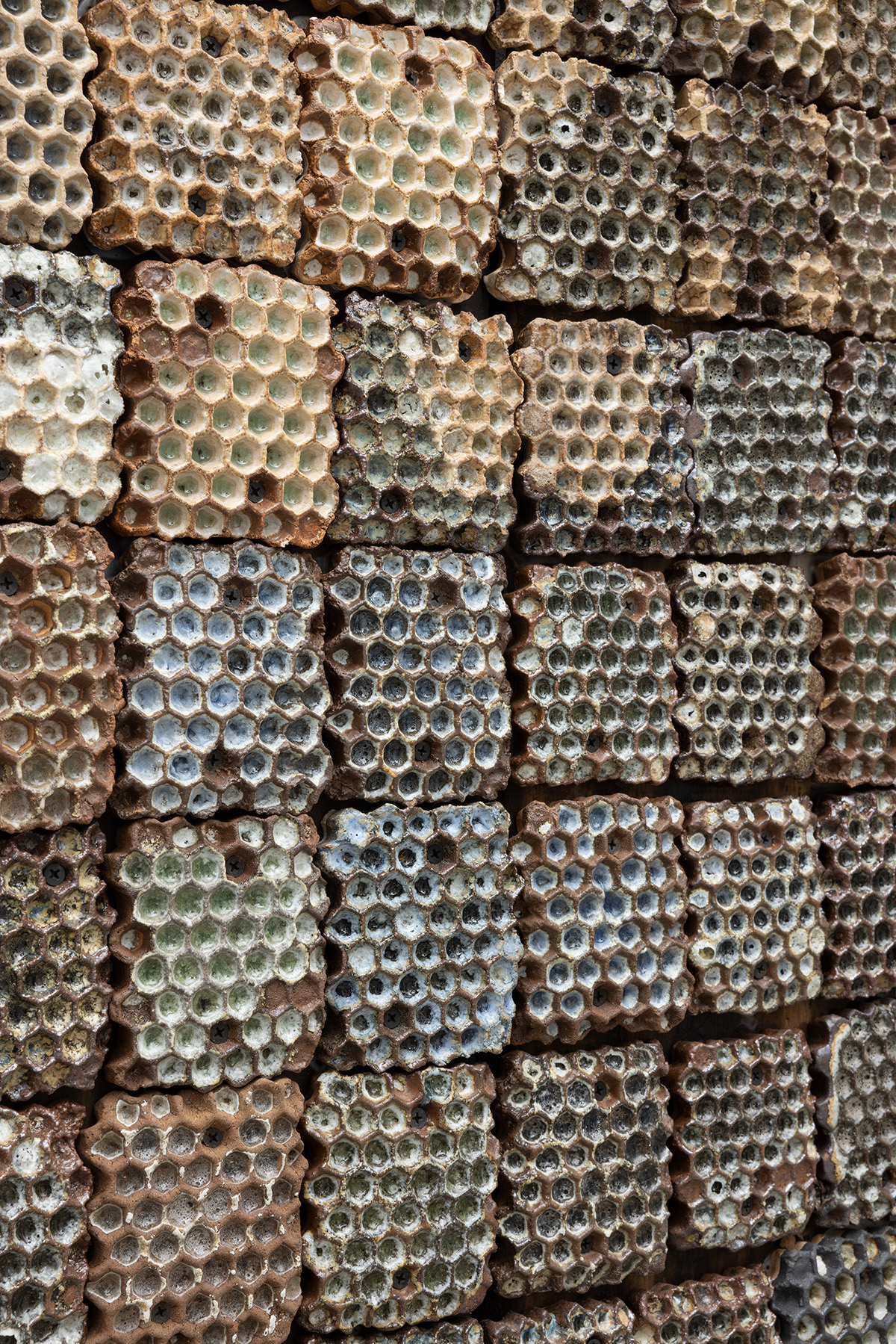 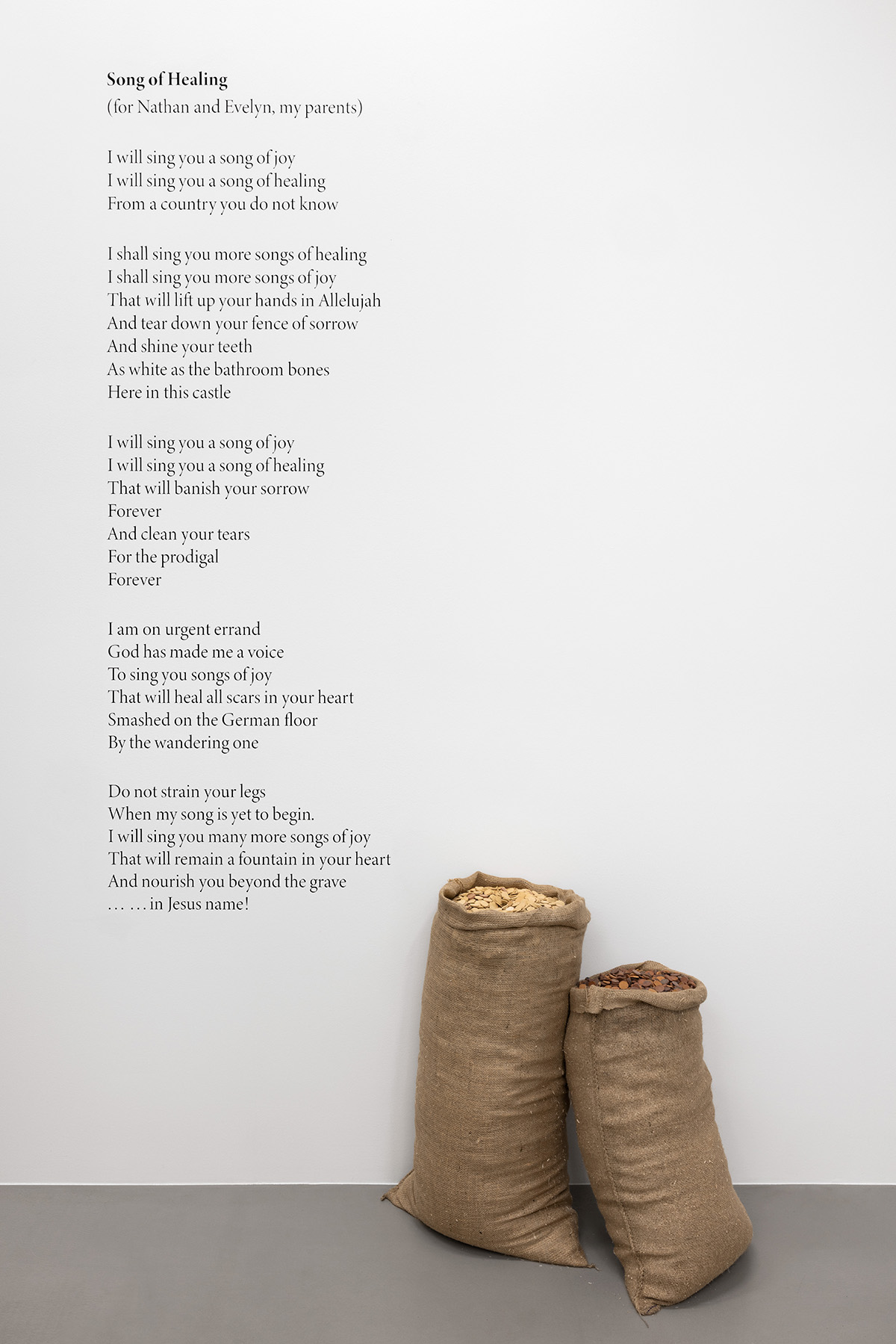 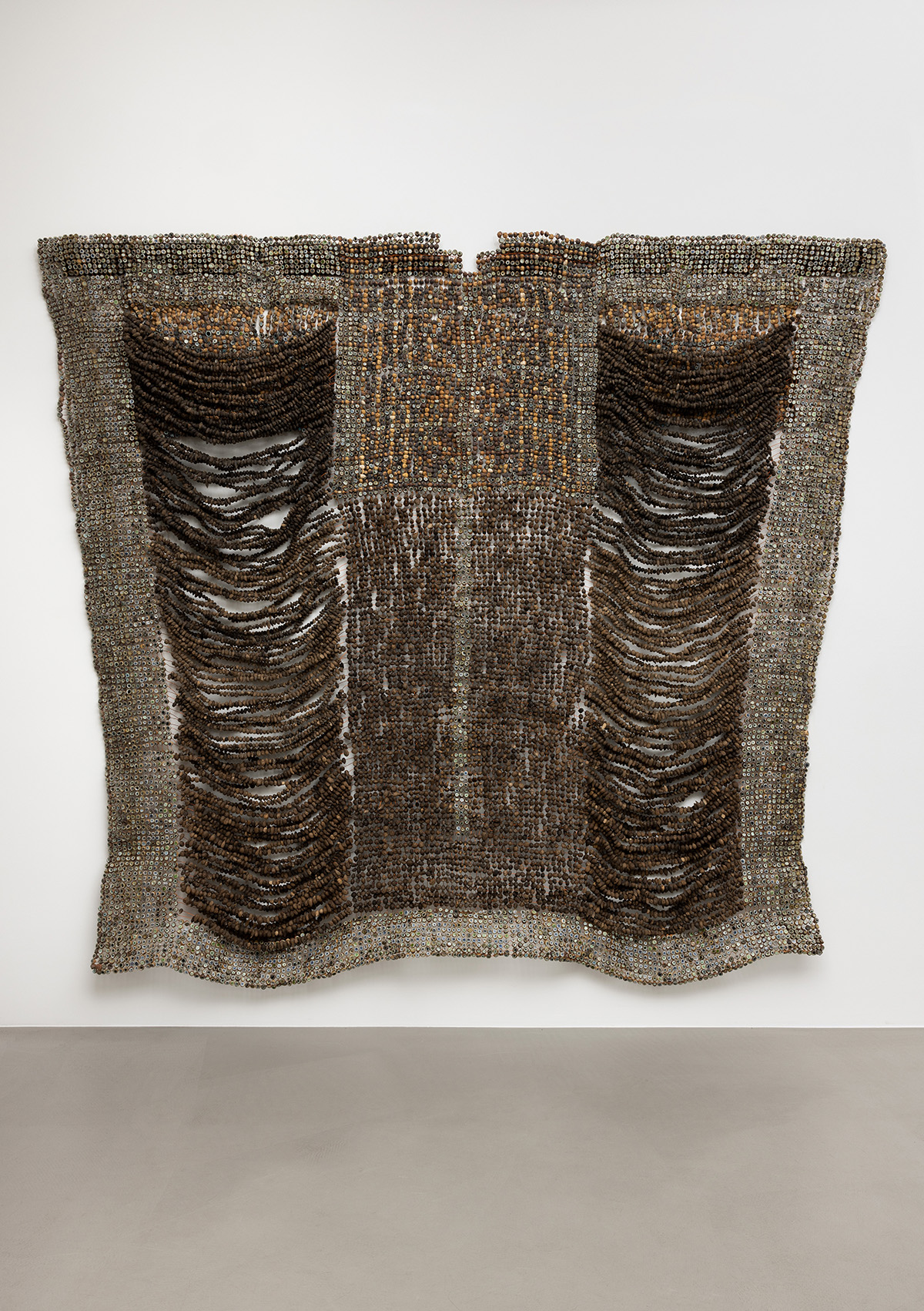 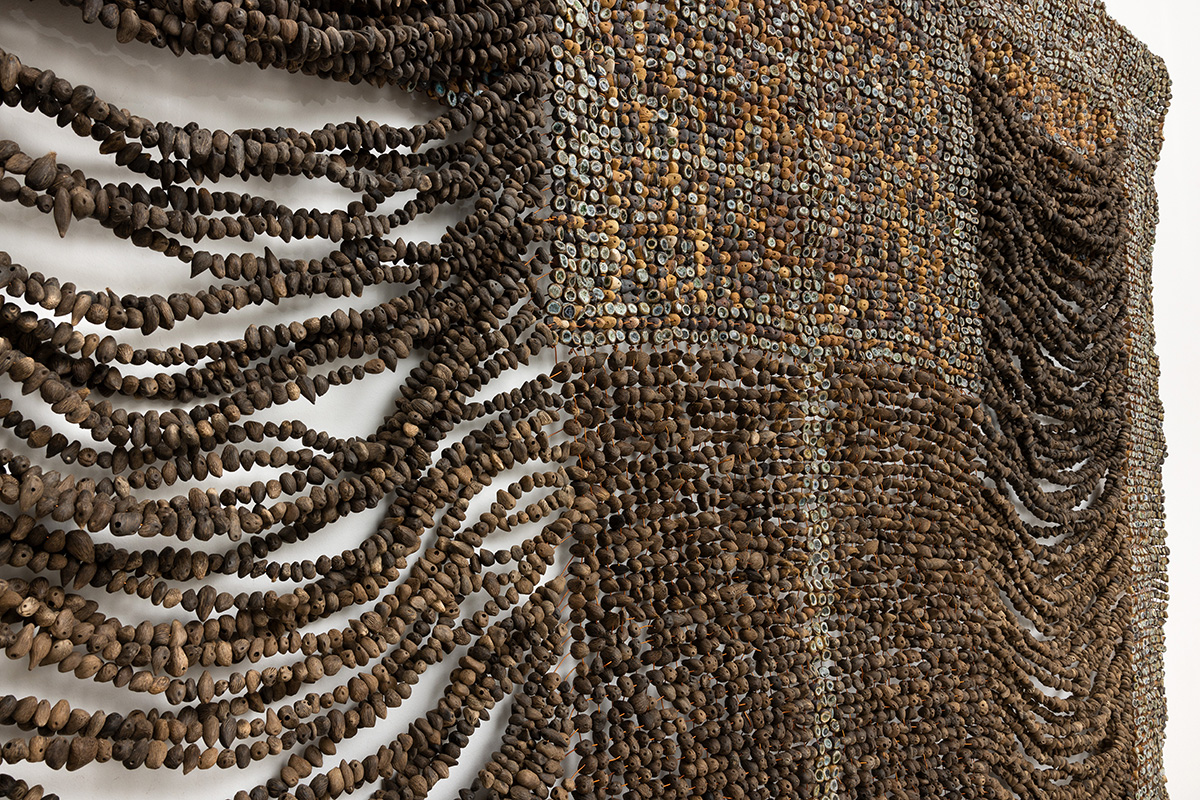 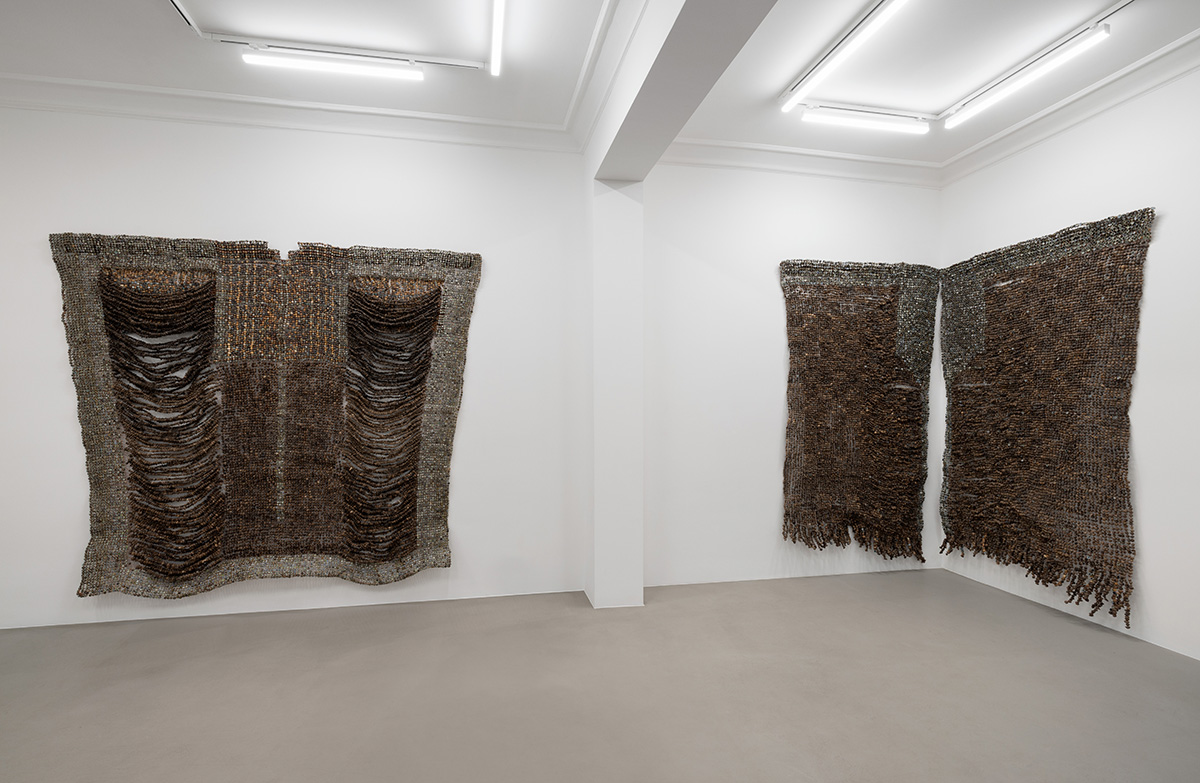 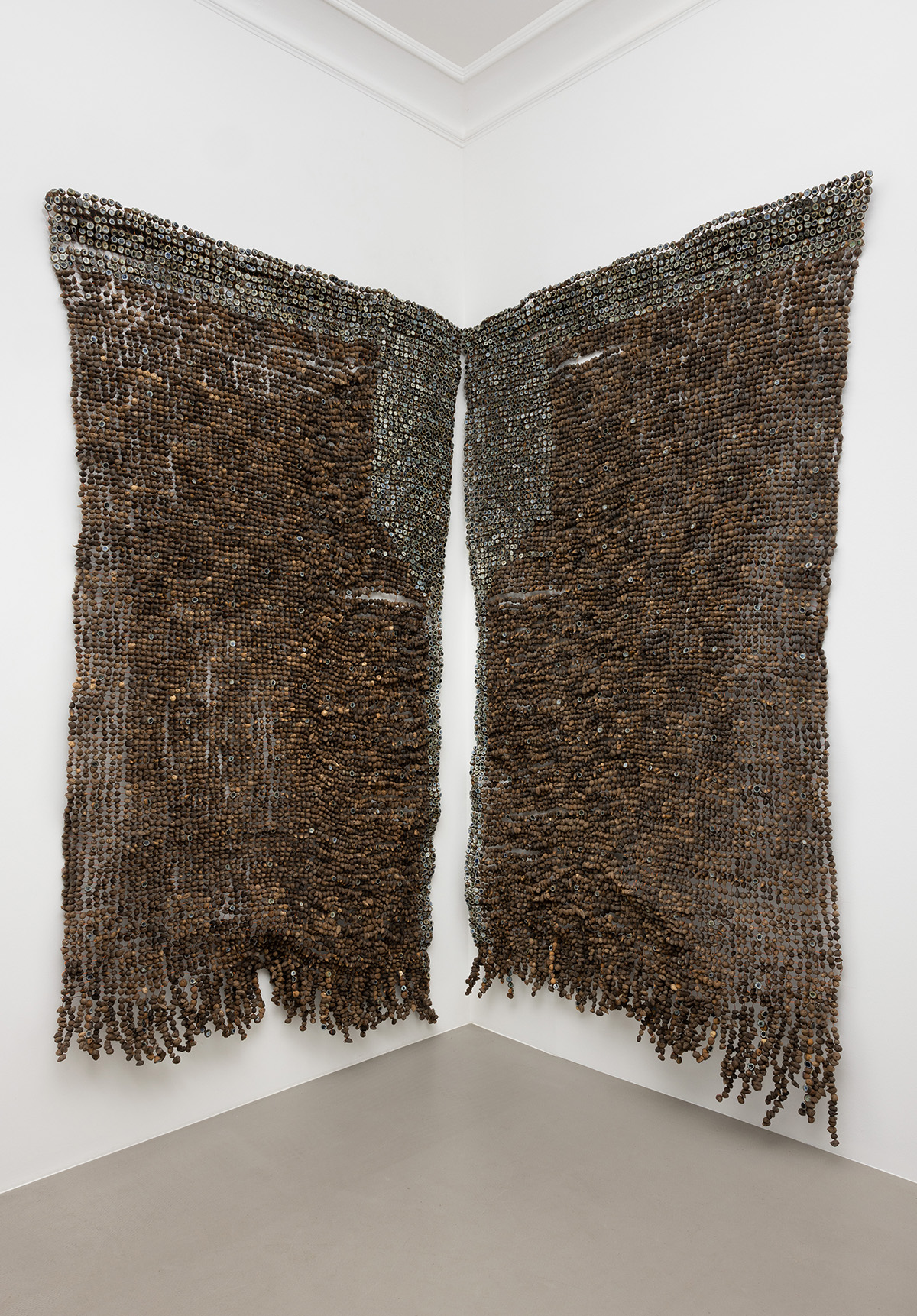 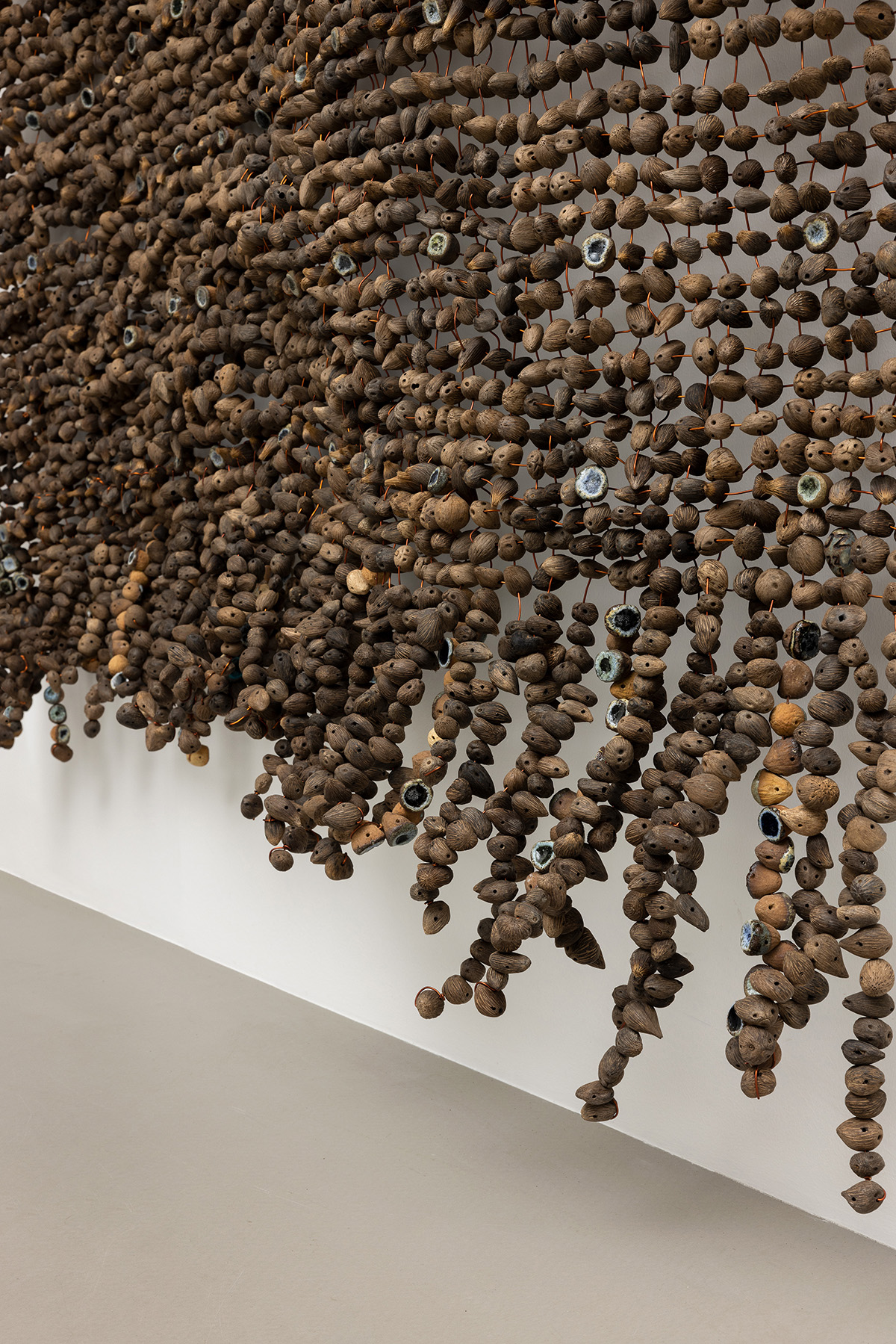 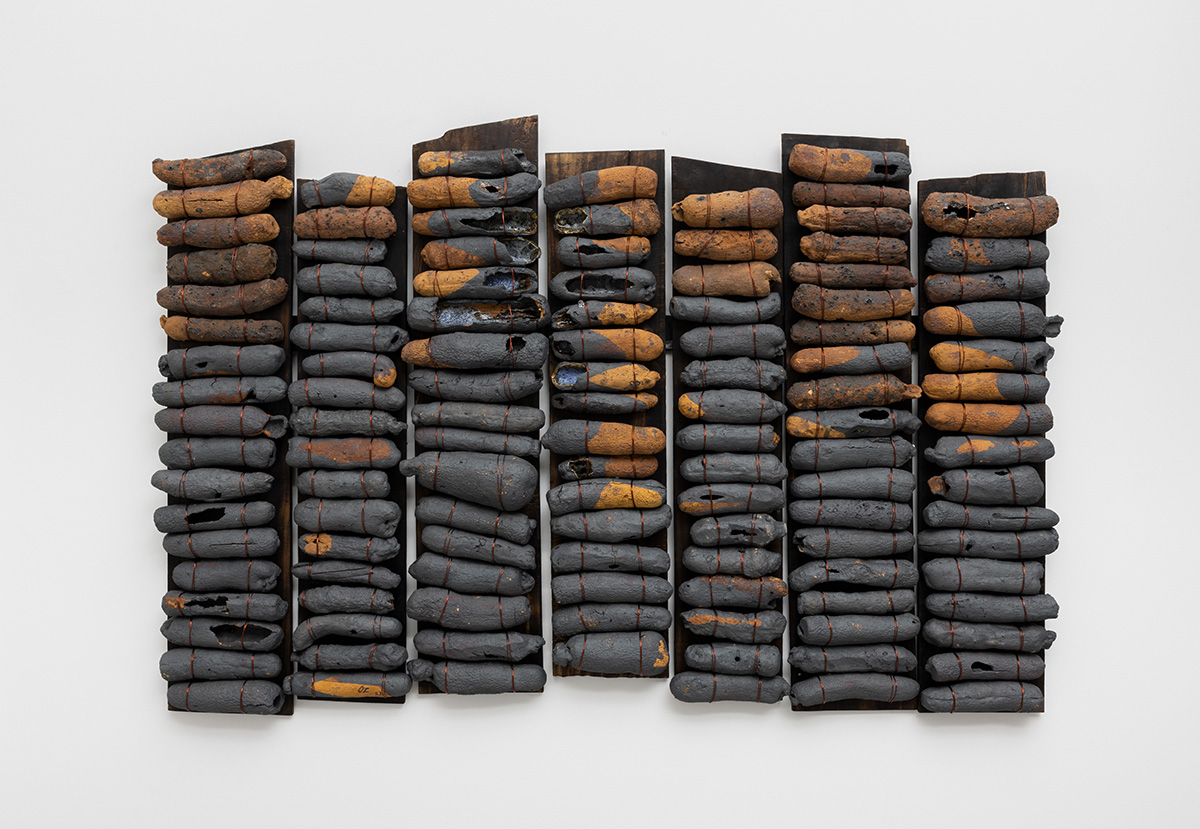 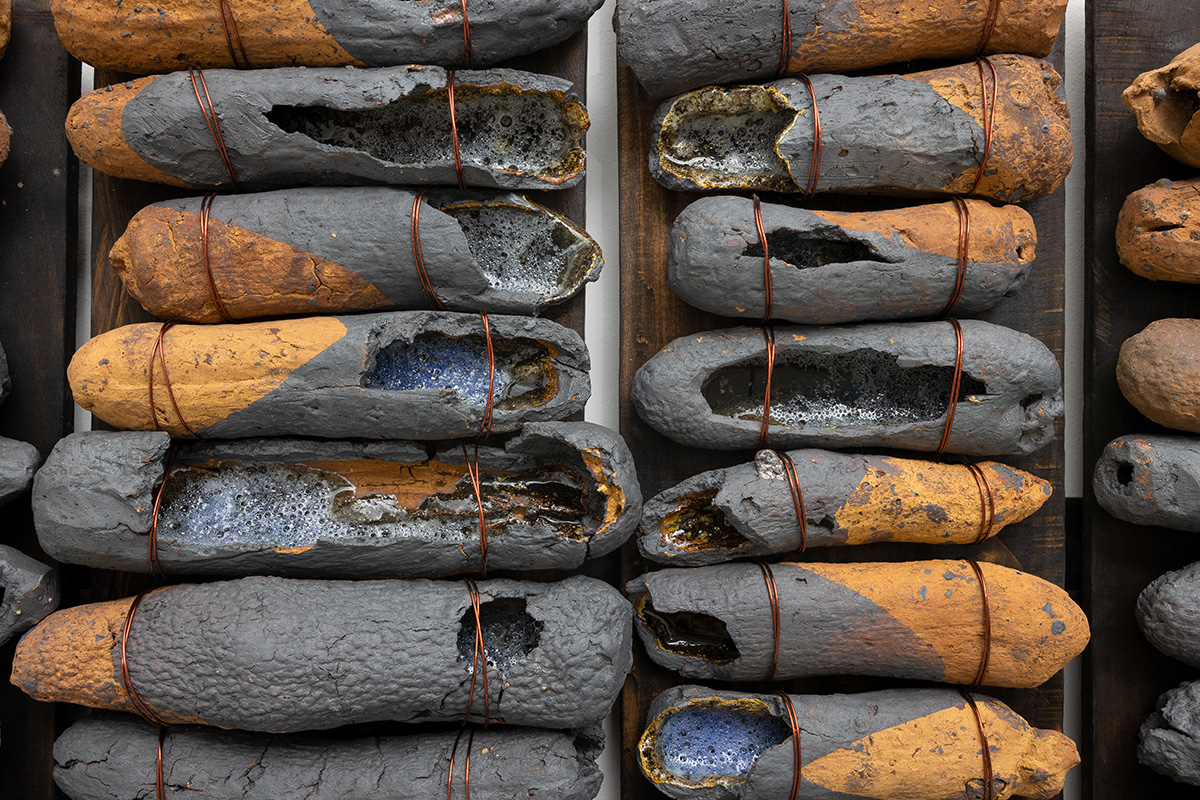 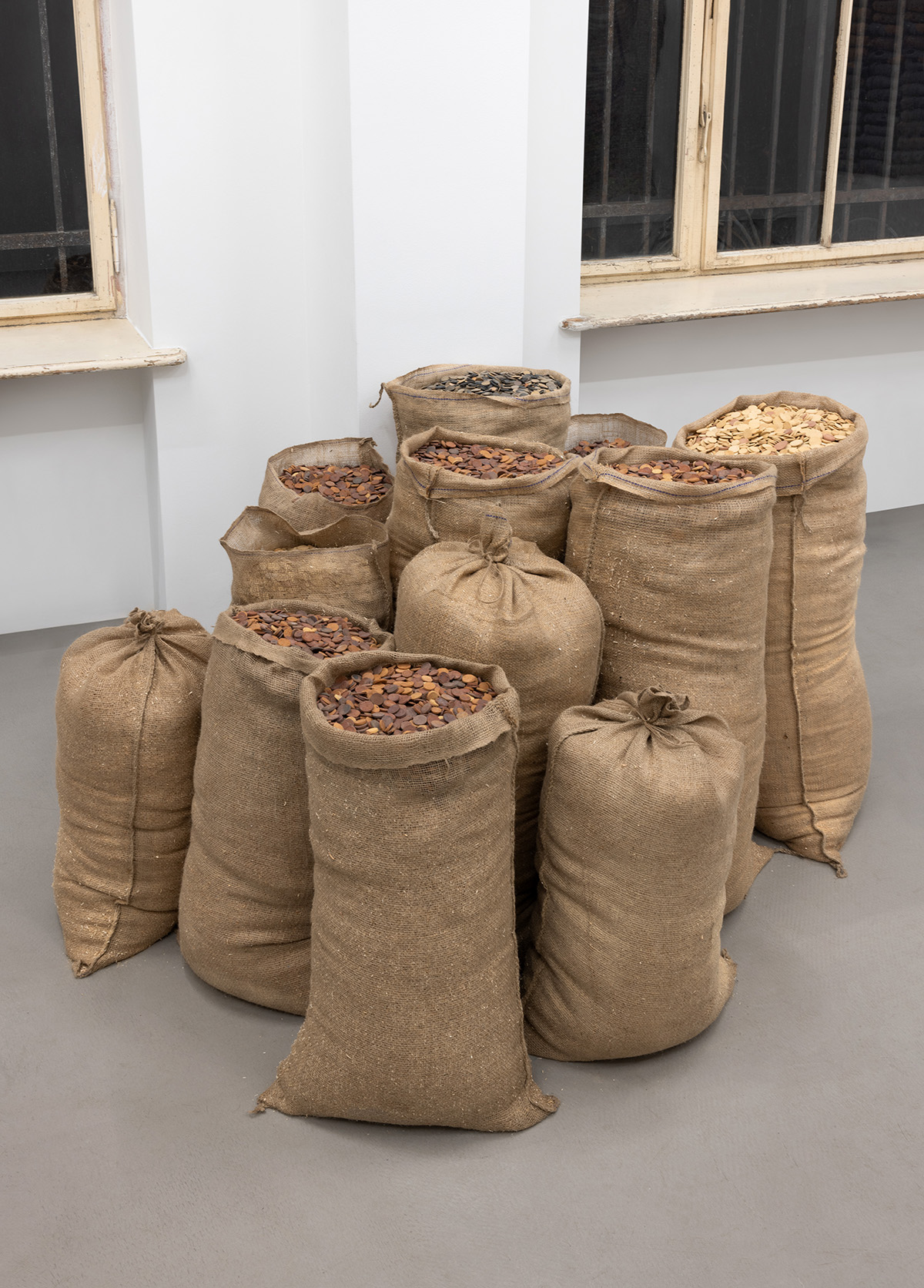 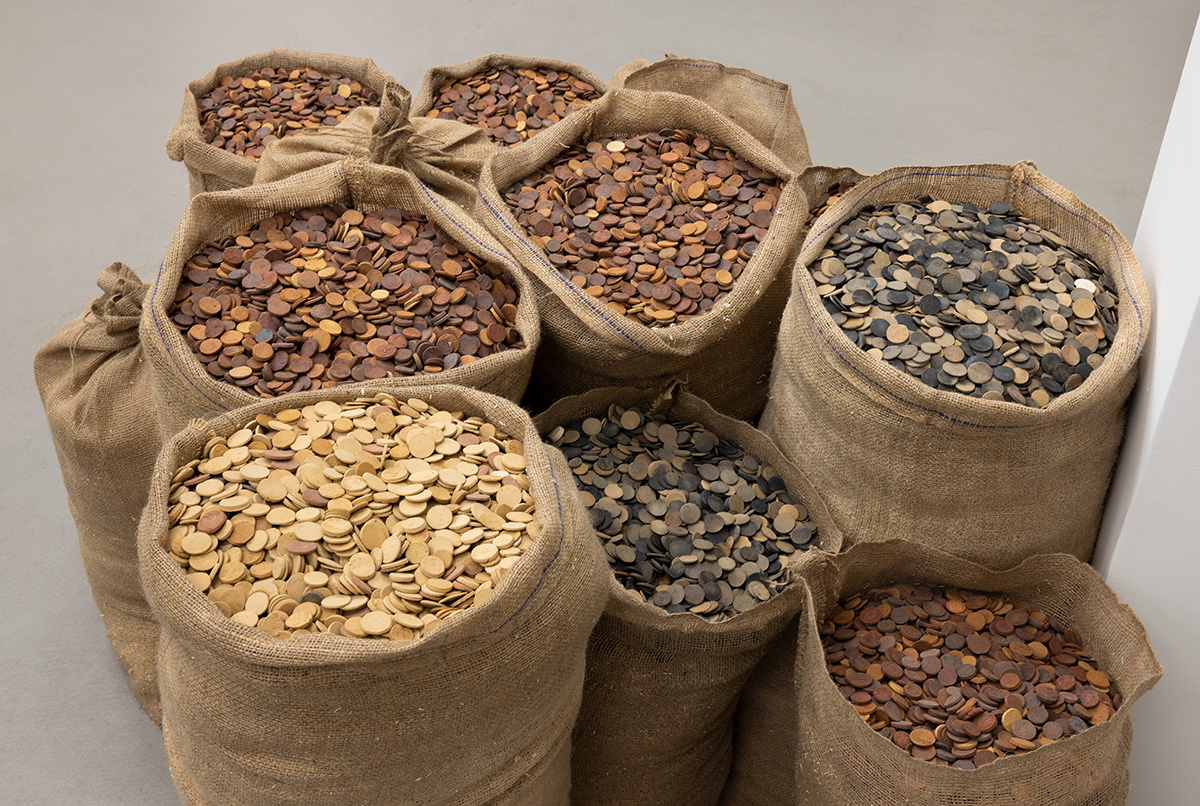 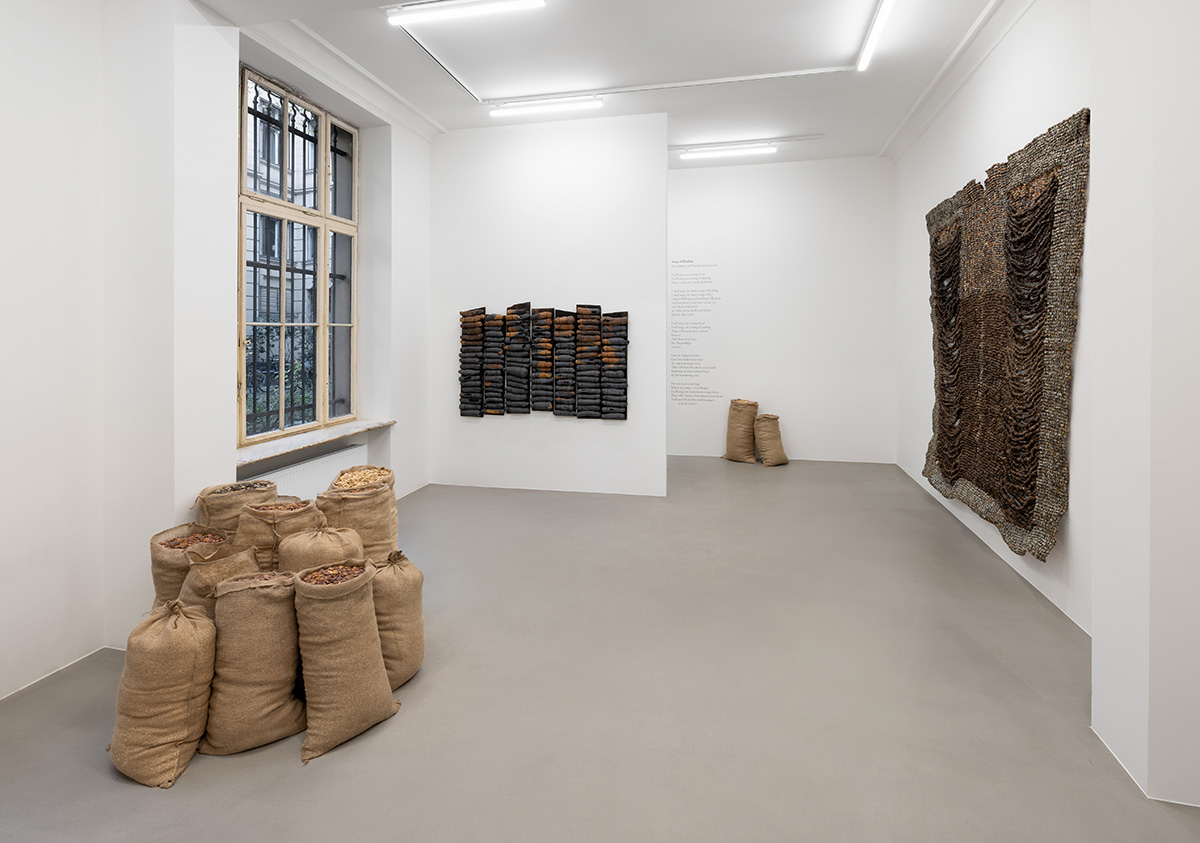 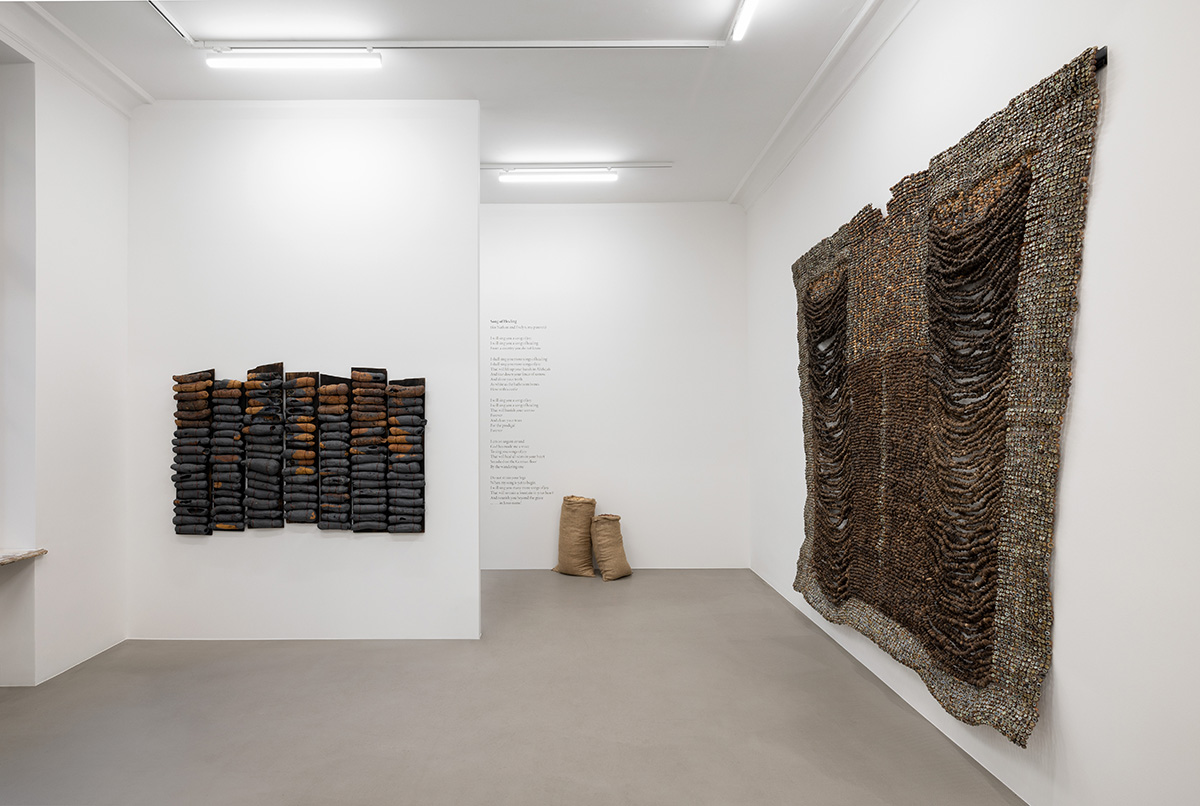 Ozioma Onuzulike (Achi, Enugu State, Nigeria, 1972) graduated First Class from the Department of Fine and Applied Arts, University of Nigeria, Nsukka, where he was recently  Head of Department and professor of ceramic art and African art and design history, and is currently Director of the university’s Institute of African Studies. In his work, he often configures the multiplicity of individual units to represent the continuous nature of socio-political and environmental issues experienced in Africa through the aesthetic, symbolic and metaphorical nature of clay and its working processes.

His solo exhibition, Seed Yams of Our Land, was held at the Centre for Contemporary Art (CCA), Lagos, Nigeria, in 2019, along with a presentation of his poetry collection of the same title also published by the CCA. Outside of Nsukka, his works in the honeycomb and palm kernel beads series were first exhibited in The Way We Are, his solo show of 2021 at the Ko Gallery in Lagos, Nigeria. His works were included in the just concluded exhibition at the Museum of Archeology and Anthropology, University of Cambridge, UK, arising from the [Re:]Entanglements Research Project led by Professor Paul Basu. He has participated in international art fairs, including Art X Lagos (2021), Armory Show, New York (2022) and 1-54 London (2022). Onuzulike is a fellow of the Civitella Ranieri Centre, Umbertide, Perugia, Italy, where he undertook a residency under the UNESCO-ASCHBERG Bursary for Artists, and an alumnus of the prestigious Skowhegan School of Painting and Sculpture, Maine, USA.