“The story of man and his friends the birds is filled with many fine examples of ways in which these noble creatures were added to the beauty of the world”.

The world of birds has provided an endless source of inspiration for the Kosovar artist Petrit Halilaj, who since a young age found himself captivated by the flying creatures. Comprising several different bodies of works and spanning over seven years of research, this Showroom Series explores the particular fascination between Halilaj and birds. 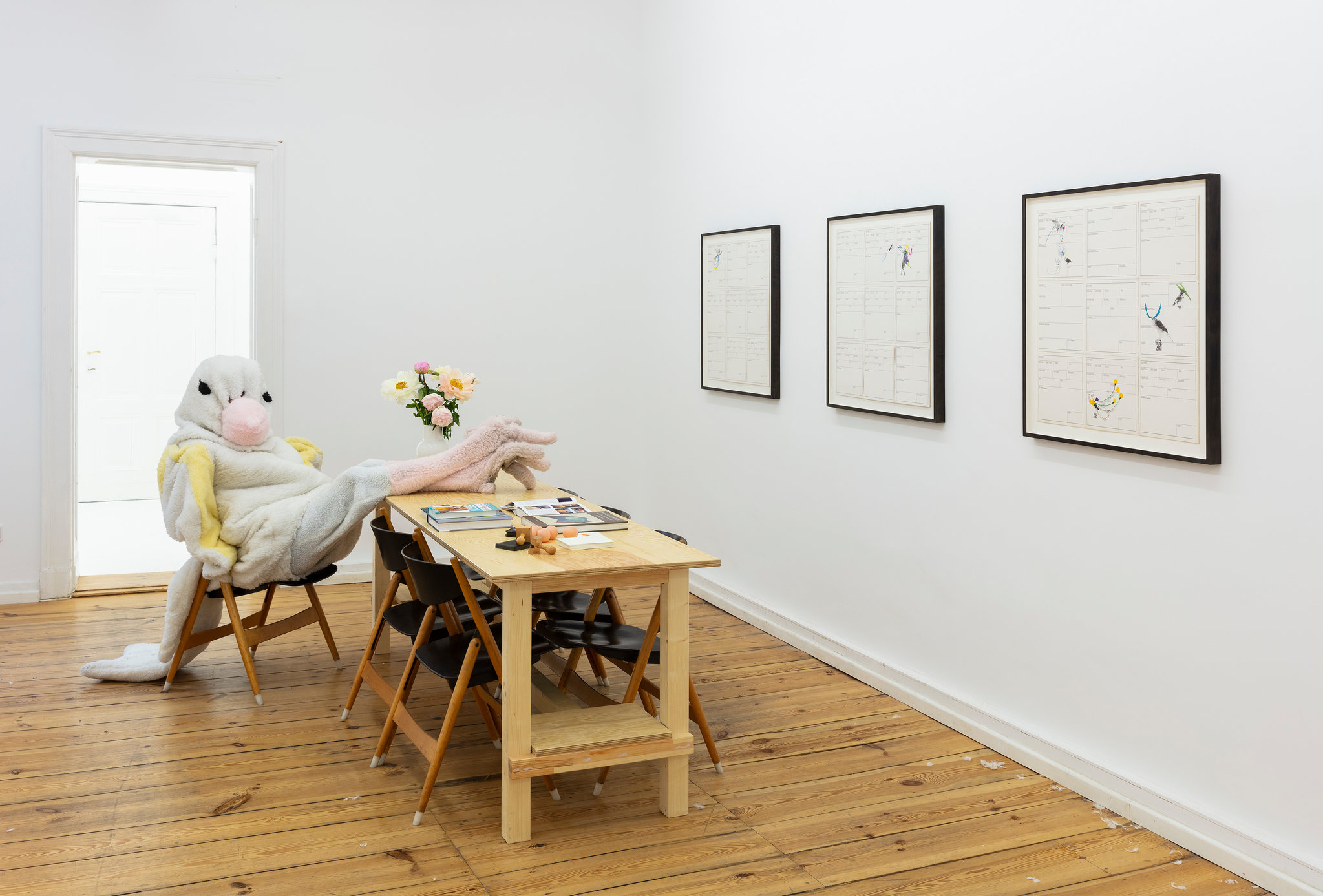 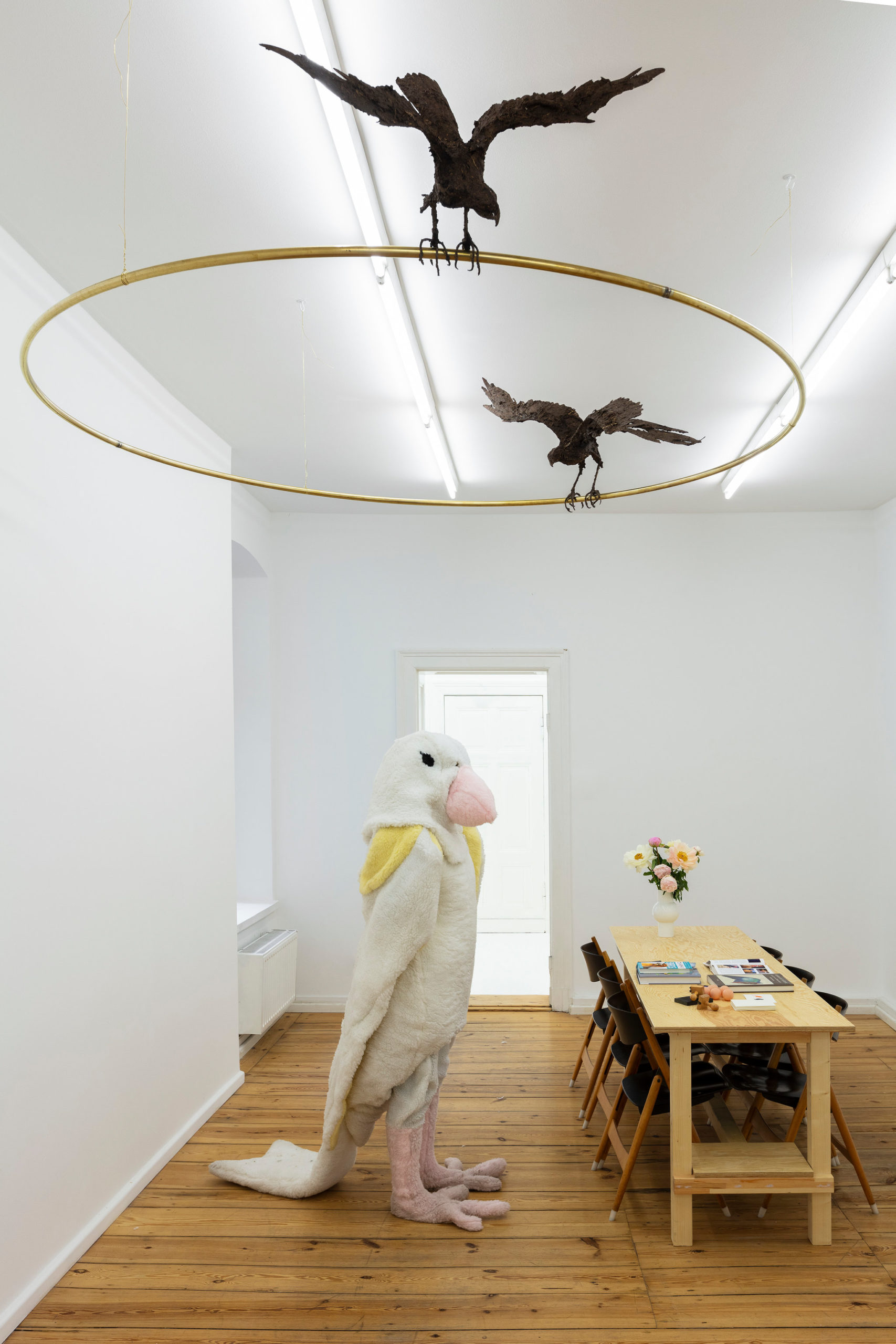 The drawings from the series Several birds fly away when they understand it (2) depict images from the bird archive of the former Natural History Museum of Kosovo (whose story was the subject of the exhibition Poisoned by men in need of some love (3)). Creating risographs of original photographs of the birds, which were found in the archive of the former Museum of Natural History of Pristina, Halilaj modified the prints by hand-painting ornate, exotic masks on them in an effort to restore dignity and beauty to the forgotten taxidermic creatures. The drawings and risograph prints were made on inventory cards found in the Natural History Museum of Kosovo. Poisoned by men in need of some love revolves around the lost taxidermic collection of the former Museum which, after the Kosovo War and Kosovo’s subsequent establishment as the Republic of Kosovo, was discarded in favor of a more nationalistic display that replaced the animals in the Ethnographic Museum of Kosovo (4).

Halilaj produced an extensive body of work, encompassing sculptural reproductions of the lost taxidermic animals, vitrines and artifacts from the original collection, a 3-channel video documenting its rediscovery and drawings made on original archival papers of the museum. The series has since been the subject of several exhibitions and presentations and represents one of Halilaj’s most important projects to date. (5)

The poetic significance of bird calls and our human attempts to imitate them is another facet of Halilaj’s work, where bird songs are connected to the idea of language and narration. (6) 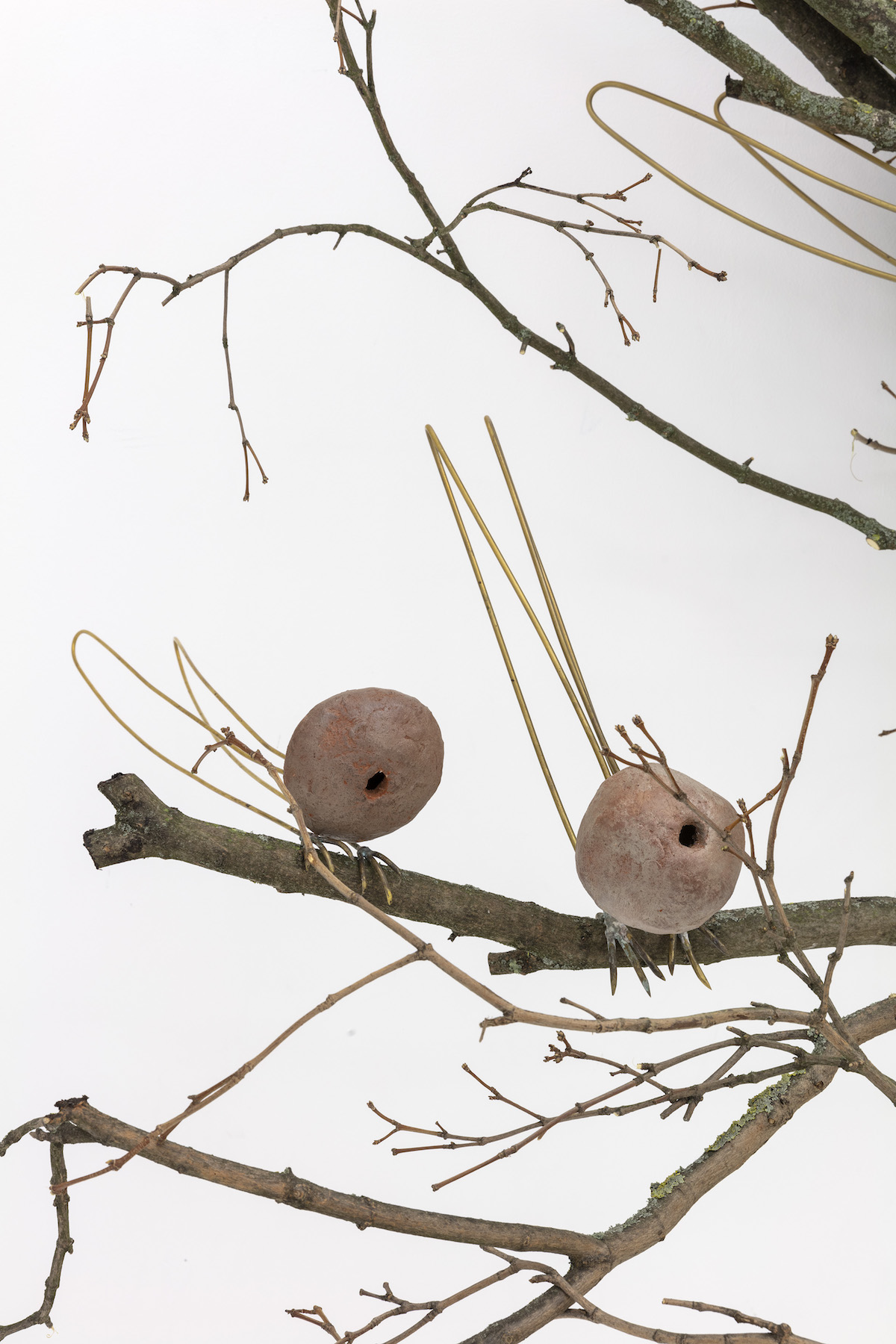 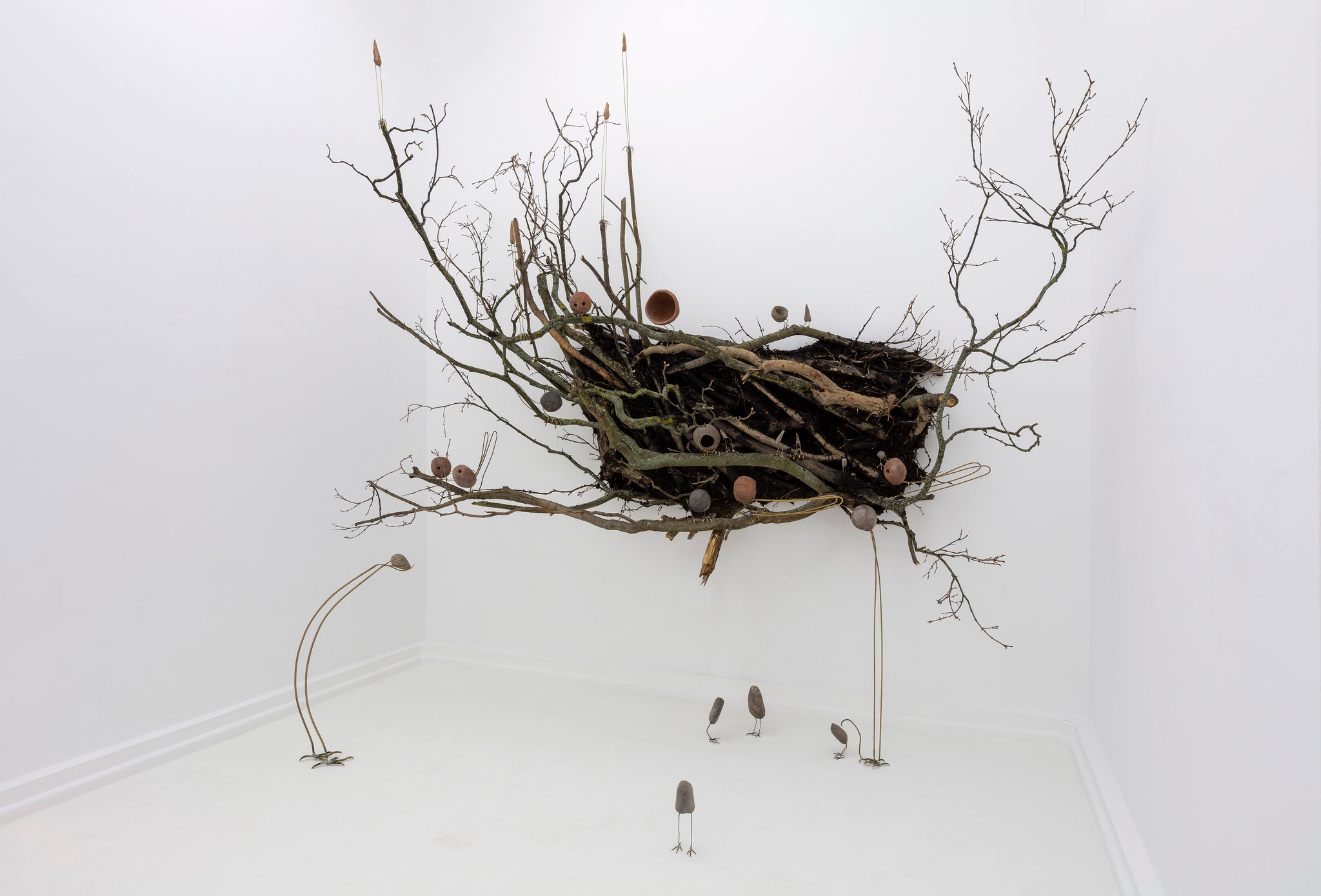 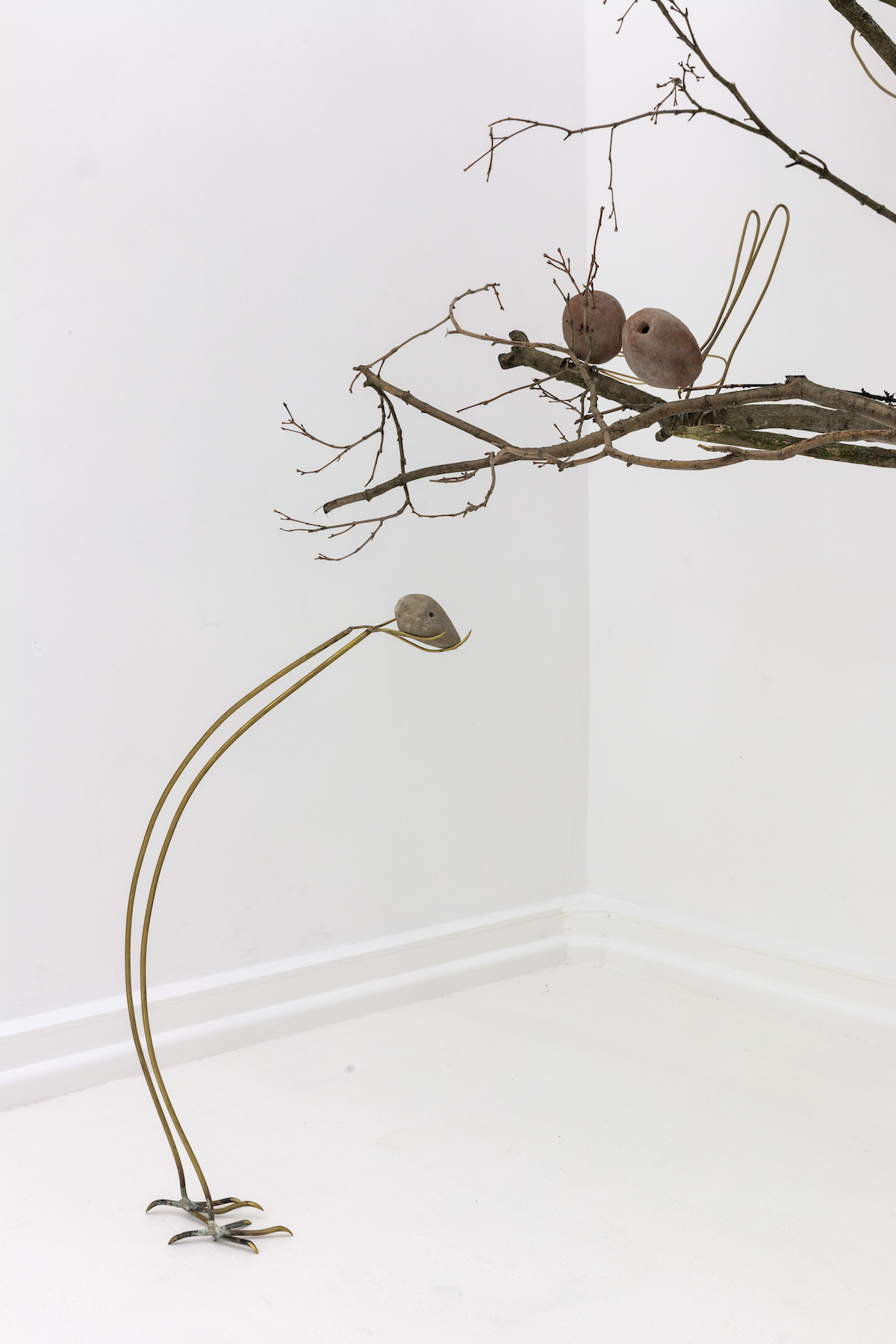 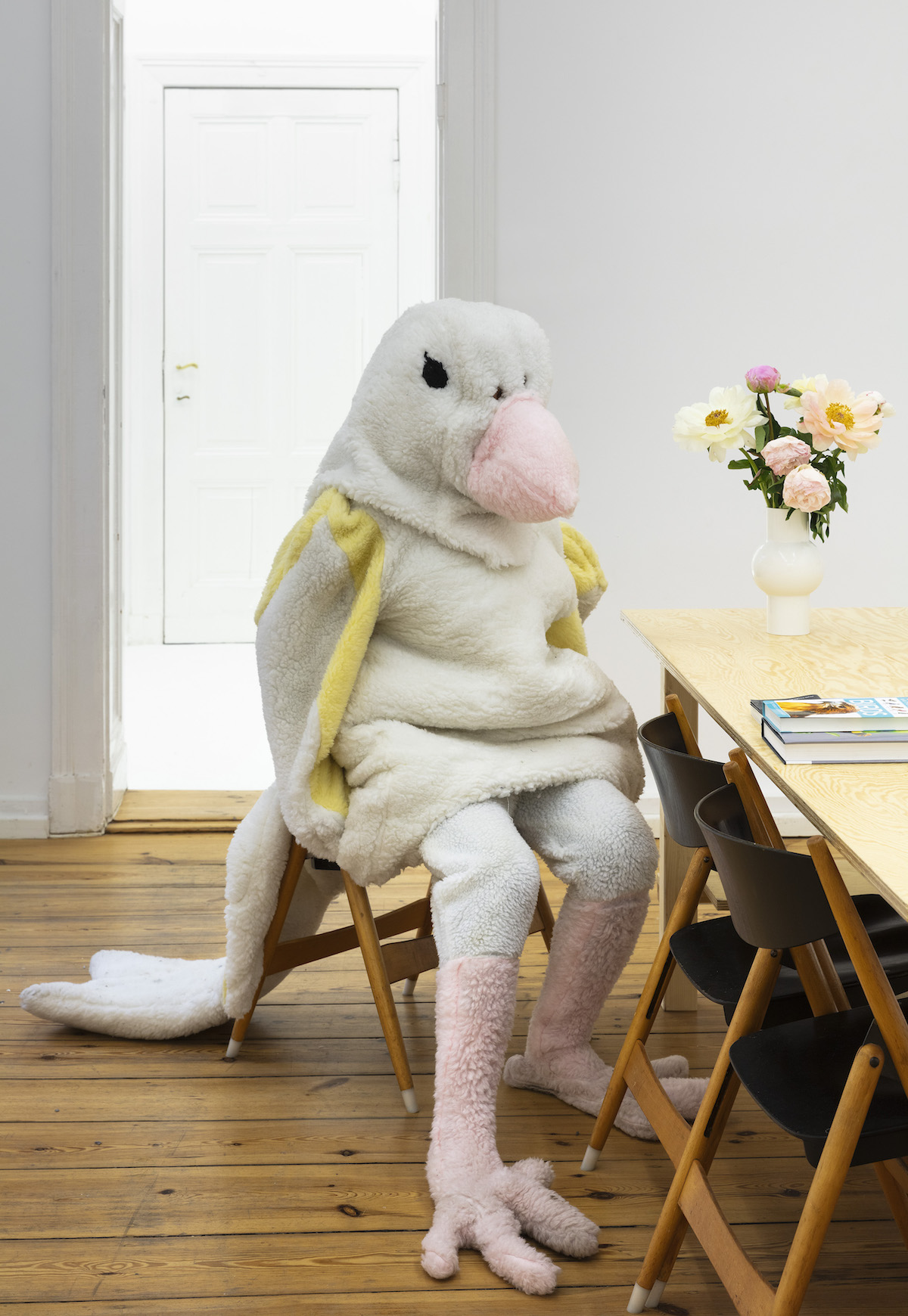 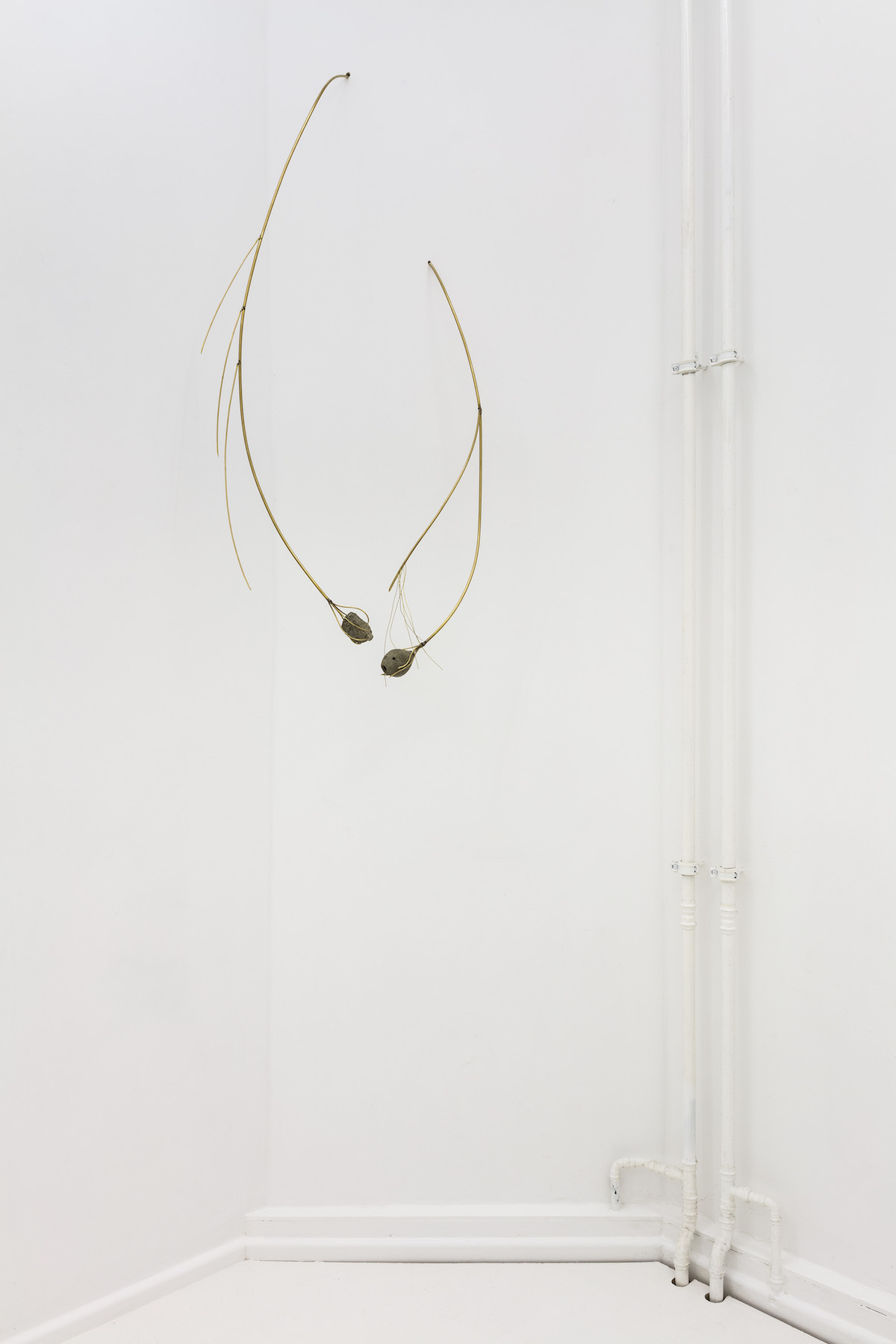 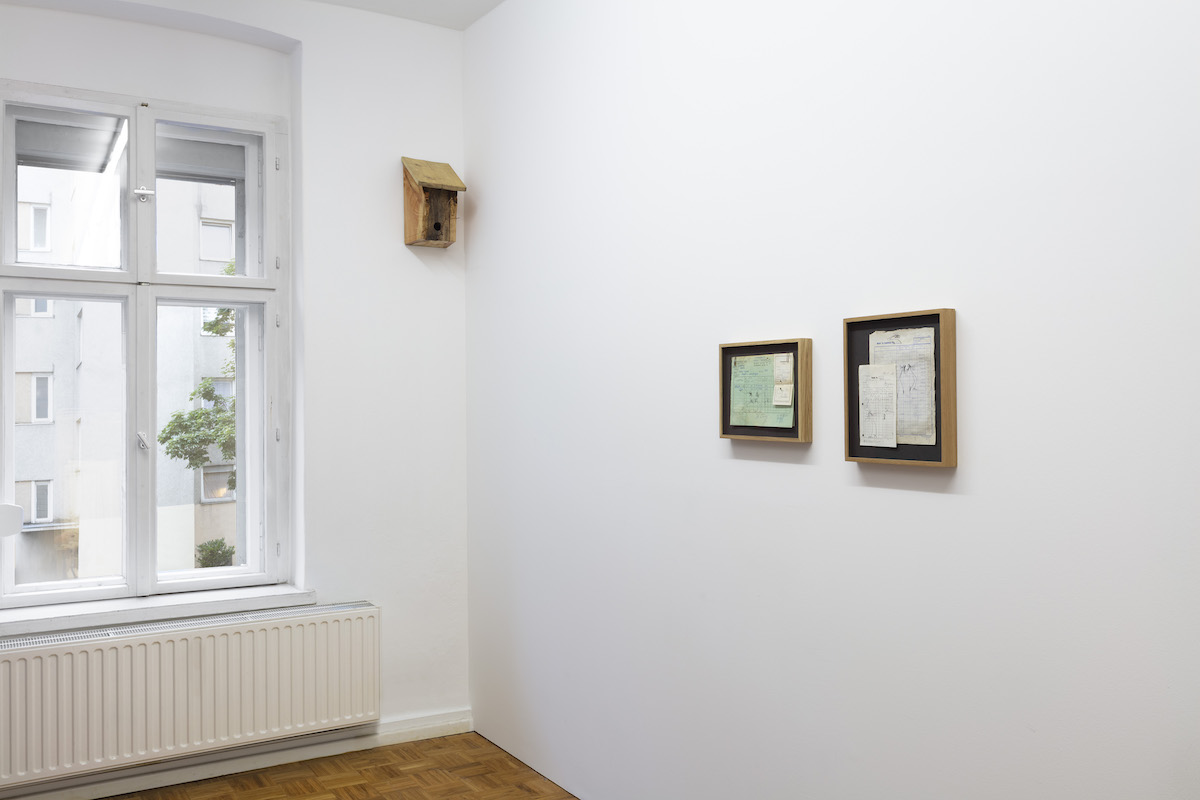 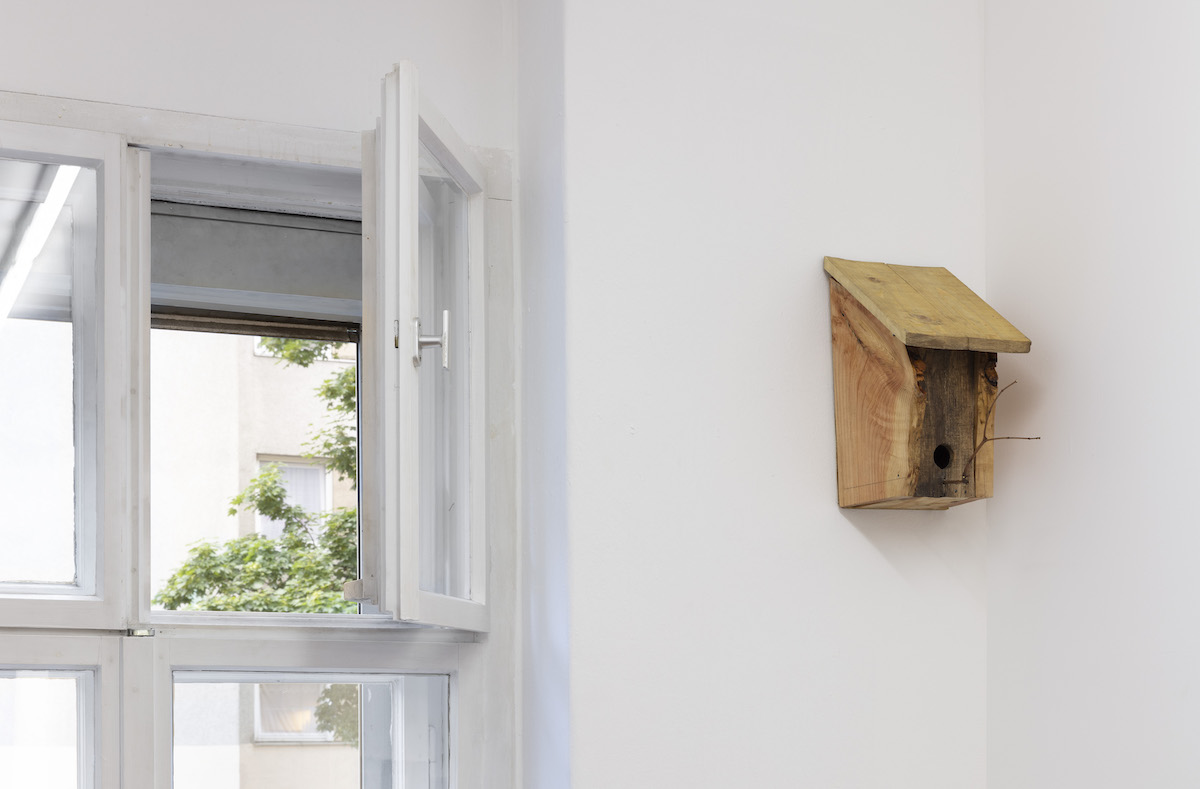 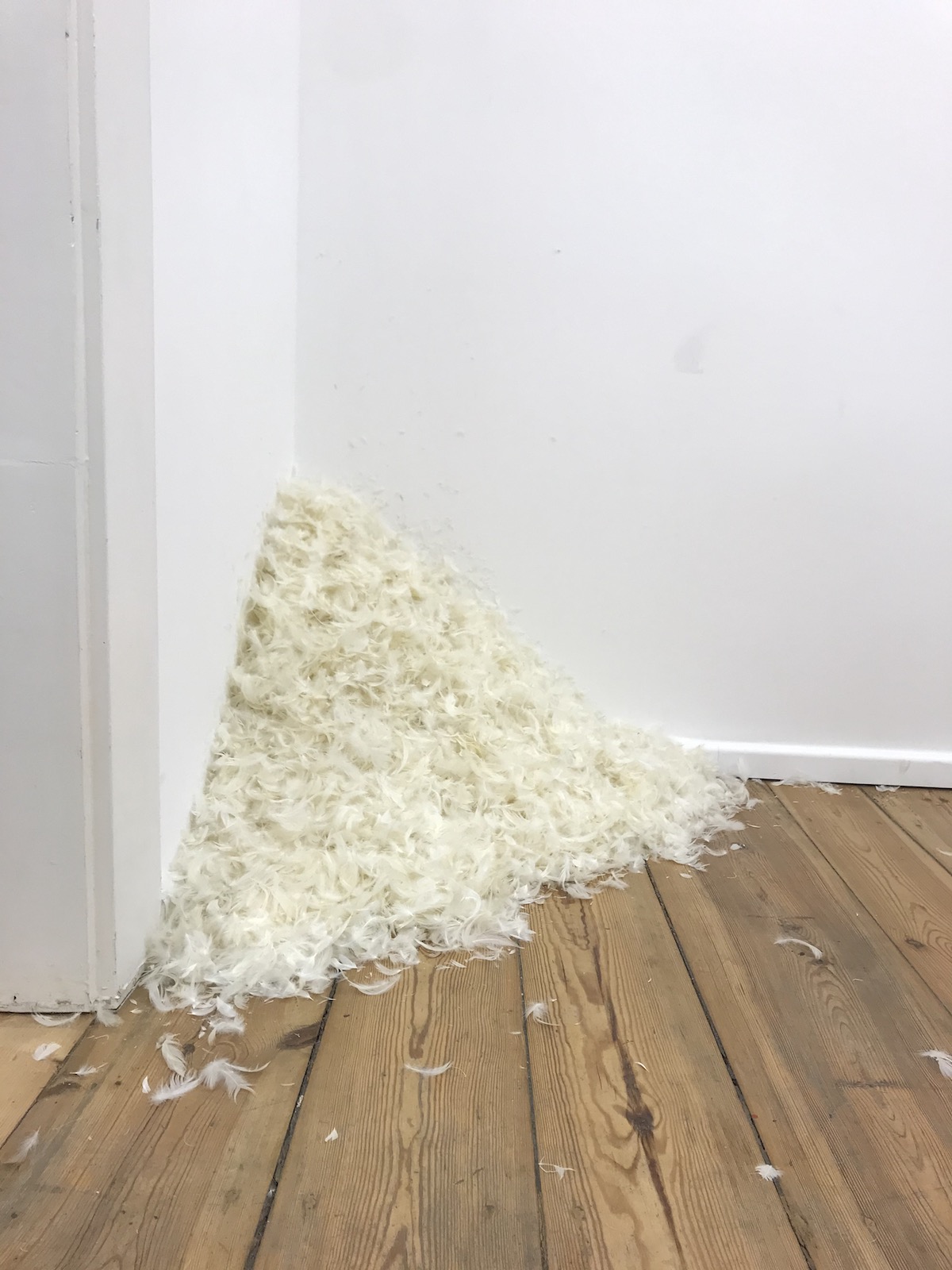 One of the earliest mimicries of bird song can be found in the Runik instrument, the ocarina (7). Coming from one of the oldest Neolithic settlements of the Balkan region, this ancient musical instrument is a principal motif of Halilaj’s, in its connection to Runik tradition and its transmission through generations. Following the history of this ancient artifact, Halilaj came to discover the work of Shaqir Hoti, a Prishtina-based composer who in recent years brought the ocarina and its unique sound back into the realm of contemporary music, by reproducing the instrument using traditional techniques and publicizing its sound in concerts.

With the same intentions, Halilaj learned from Hoti how to build and play the ocarina, an instrument which has since made its presence into many of his artworks. Especially for a culture that survived mainly through oral tradition, the ocarina becomes a vessel of voices connecting old and new, a melodic link between the need to grow roots and the desire to transcend imposed limits. Ocarina sculptures resembling little birds on brass branches reflect the desire for a borderless existence, the possibility of a national identity and cultural heritage that transcends territorial confinement and defies the ethnic discrimination endured by Kosovo citizens.

Ocarinas make another appearance in the series of drawings Shkrepëtima (en. flash of light; a sudden burst of feeling), homonymous to the multifaceted project started in 2018. An extensively researched, collective effort of Albanian citizens, actors and musicians, the exhibition series started with a performance and culminated in a solo exhibition at Merz Foundation in 2019. (8)
The original event, which took place in front of the ruins of the House of Culture in Runik (Skenderaj) (9), represented Halilaj’s first major intervention in a public space. The stage was animated by moving sculptures, sounds, lights and an exceptional scenography created by Halilaj from the ruins of the building and inspired by the collective memory of Runik citizens. The performance reproduced four traditional Albanian theatrical plays, which only exist in fragments. Extracts of each were re-enacted in a narrative starting from a dream where migratory birds construct a nest-like bed in which the dreamer lies asleep. The bird costumes – designed by Halilaj and animated by dancers to music composed by ANDRRA (Fatime Kosumi) and Christoph Hamann – refer to the colors and flying movements of the European bee-eater (Merops apiaster), an avian species that returns each spring to the Balkan region after its wintering in Africa.

A central role was given in Shkrepëtima to the Runik Ocarina and its symbolic value: despite the requests for restitution on the part of the Kosovar government, it remains in Belgrade at the Museum of Natural History (where it was lent for an exhibition at the museum before the conflict began) and therefore inaccessible to this day to the citizens of Kosovo. This was the shared destiny of most of the artifacts found in the Runik region. Leading up to the Shkrepëtima project, Halilaj had investigated the Neolithic discoveries of his ancestors, developing as a result a large body of work under the title RU, in which the entire findings of the Neolithic settlement from the village of Runik was reproduced to scale, each of them gifted golden bird legs. For his first solo entry in the US, the exhibition RU at New Museum (10) featured an extensive environment that drew on his research into the flight patterns and habitats of migratory birds. Piecing together multiple institutional and archeological records (collected during his 3 month residency at the Smithsonian in 2018), Halilaj made the full extent of the findings in Runik available to the public for the first time. The reference to migratory birds emphasizes the dual need to belong and to be free, and evokes the right to leave as much as to come back. Works from the project, titled RU_Cuculus Canorum, Limosa limosa, Nyctanassa violacea, Riparia riparia, Scolopax mira, are presented currently in Berlin, where a nest-landscape is home and protection to the bird-pot sculptures with names that correspond to migratory bird species.

An attentive observer may notice that most of Halilaj’s birds are deprived of their most conspicuous feature: wings. This gesture perhaps further aligns the birds to the human realm, and indeed, birds have for long carried meanings of intimacy and relationships for the artist.

In recent years, Halilaj has developed several bird-related projects together with his partner, artist Alvaro Urbano: a tunnel installation designed for canaries to fly in and out of buildings (11), a giant egg-shaped bunker made for chickens (12), and a series of sound installations (Alvaro at night / Petrit at night), a work in which the artists placed into handmade birdhouses their recordings of each other while sleeping and snoring.
Embracing the symbol of the nest as a shelter and protective structure, these works provide a turn into the private sphere. Both charming and effacing, Alvaro at night / Petrit at night invites reflection upon the balance of love, the sometimes disruptive consequences of sharing a life, as complementary parts of human nature.

Houses, birdhouses and nests have long occupied the creative structures of Petrit Halilaj: His Venice Biennale Pavilion installation in 2013 (13) appeared as an enlarged nest dedicated to the canary birds looked after by his partner and him, symbolizing the intimacy and delicacy of love. His first solo show with Chert (now ChertLüdde) in 2009 (14) featured a gigantic nest in the shape of a book, within which reproductions of his grandfather’s tools and objects of care were placed as an homage to open dialogue. Whether they be eggs or chickens, insects or astronauts, or nests or space shuttles, Halilaj’s complex visual language points to the various spheres of life and the blurring of reality and imagination, dreams and truth, ultimately paving ways for change and hope by giving space for opposites to coexist.

1: Alfred Hitchcock, trailer for The Birds

2: Selected drawings from the series Several birds fly away when they understand it were published into the artist´s book “of course blue affects my way of shitting”, a collection of prose and poetry by Petrit Halilaj written between 2007 and 2008.

3: Read the texts “Ex is for…” by Elena Filipovic and “The Art of Remembering” by Rein Wolfs, dedicated to Poisoned by men in need of some love and collected into the publication “Petrit Halilaj”, Verlag der Buchhandlung Walther König, Köln.

5: Poisoned by men in need of some love was originally commissioned for Halilaj solo exhibition at WIELS Brussels and Lafayette Anticipation (both curated by Elena Filipovic, and toured to Bundeskunsthalle Bonn in 2015, for the exhibition She, fully turning around, became terrestrial curated by Rein Wolfs

6: The sound piece Friends of Birds by Halilaj is a collection of several temptations by the artist and various friends to imitate birds´calls. Listen to the audio HERE

7: Read a short story of the Runik Ocarina

8: An exhibition biography of Shkrepëtima, a multifaceted project by Petrit Halilaj and curated by Leonardo Bigazzi: see the exhibition at Zentrum Paul Klee, Bern and Fondazione Merz, Turin.
The works have also been recently shown into the framework of the Lyon Biennale

11: The installation For the Birds was originally conceived by Petrit Halilaj and Alvaro Urbano in connection to their joint residency at Villa Romana, Florence, and consequently exhibited at the Bundeskunthalle Bonn

13: I´m hungry to keep you close. I want to find the words to resist but in the end there is a locked sphere. The funny thing is that you´re not here, nothing is, curated by Kathrin Rhomberg, commissioner Erzen Shkololli, Kosovo Pavilion, Venice Biennale, Venice, 2013

14: The artist´s first solo exhibition at Chert (now ChertLüdde) was held from 19 September to 17 October 2009