Rods Bent Into Bows – Fabric Sculptures and Drawings 1972-1973 is the first solo exhibition of Rosemary Mayer (b.1943, New York – 2014) in Europe. The title takes its name from notes found on one of Mayer’s sketches, one of many drawings she made for the planning and documenting of her sculptures. This exhibition is the first time since the 1970s that much of this work is being shown and includes some drawings which will be on display for the first time. The show focuses on a critical point in her production, 1972–1973, during which Mayer actualized her fabric sculptures and related drawings, a body of work for which she is most known. 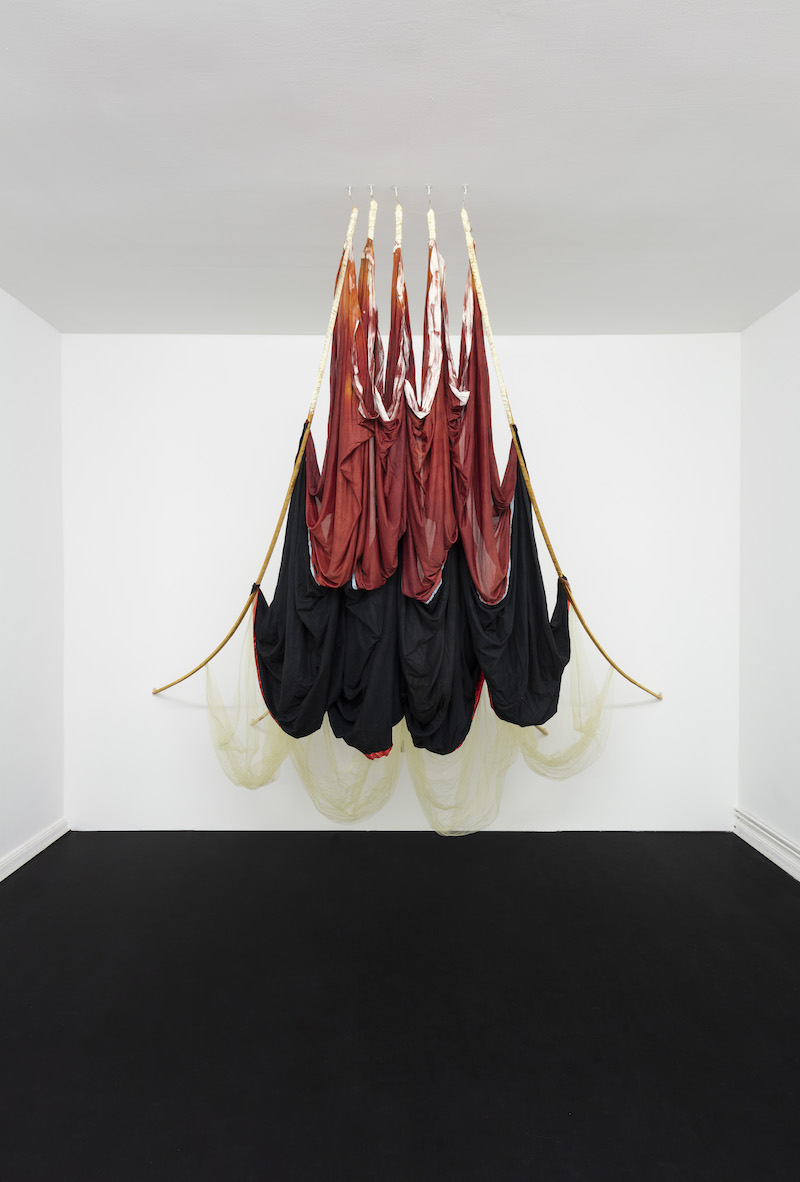 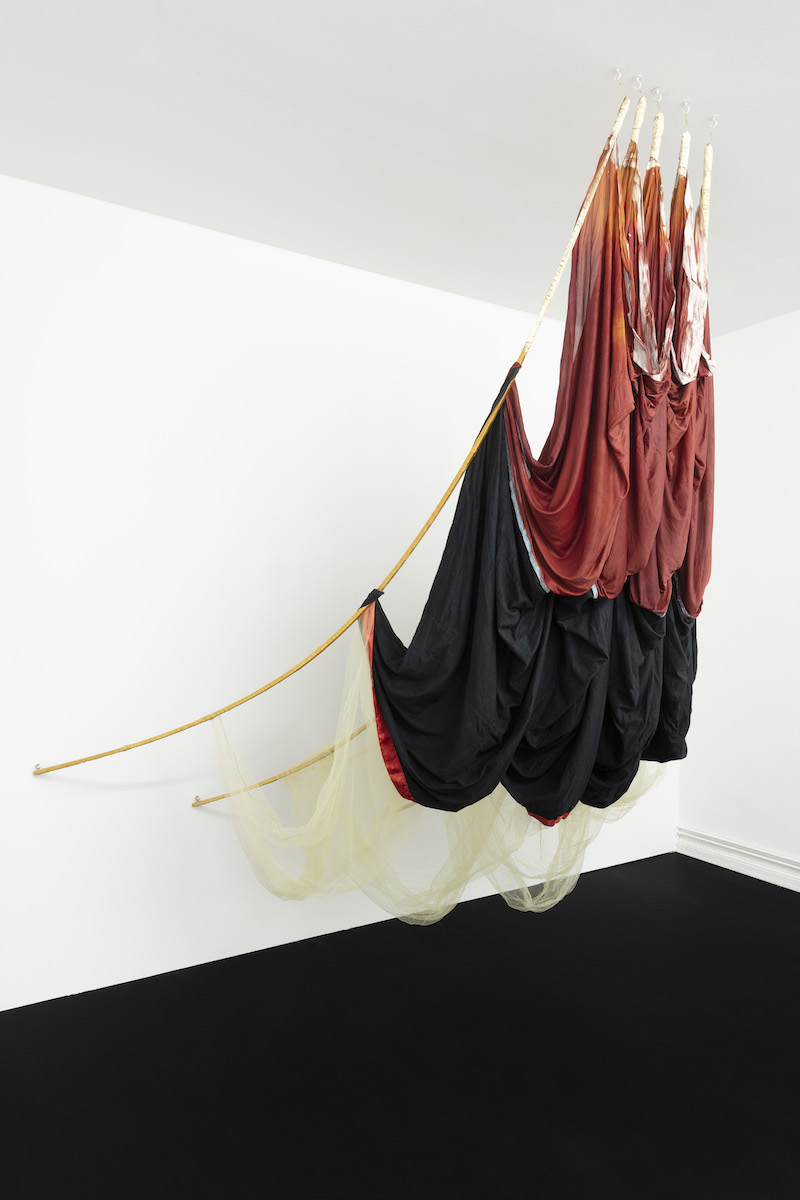 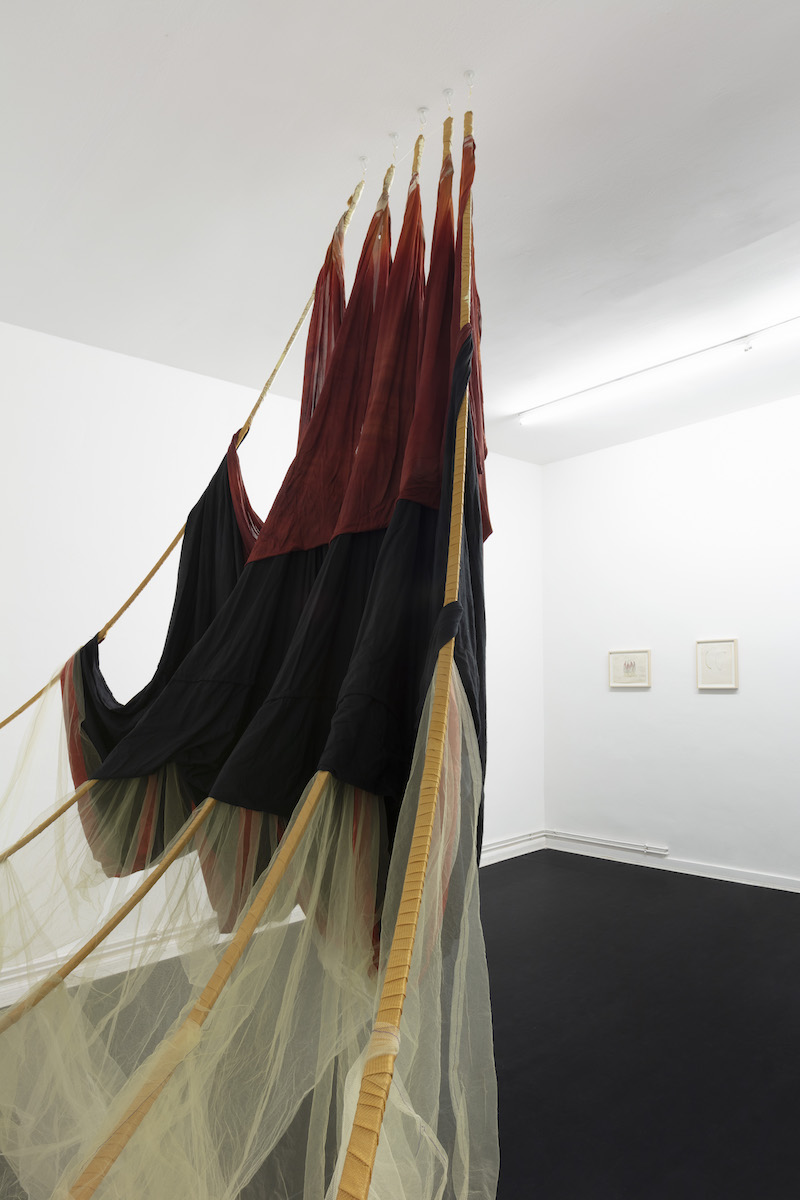 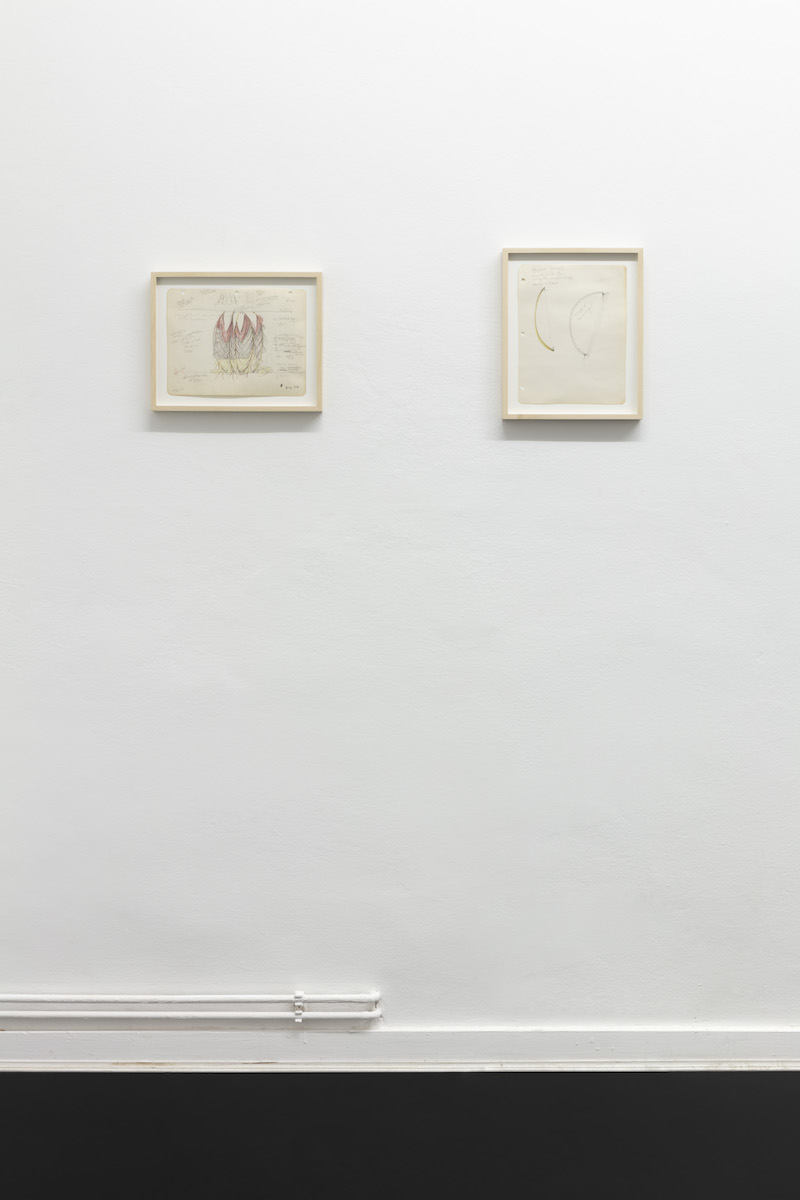 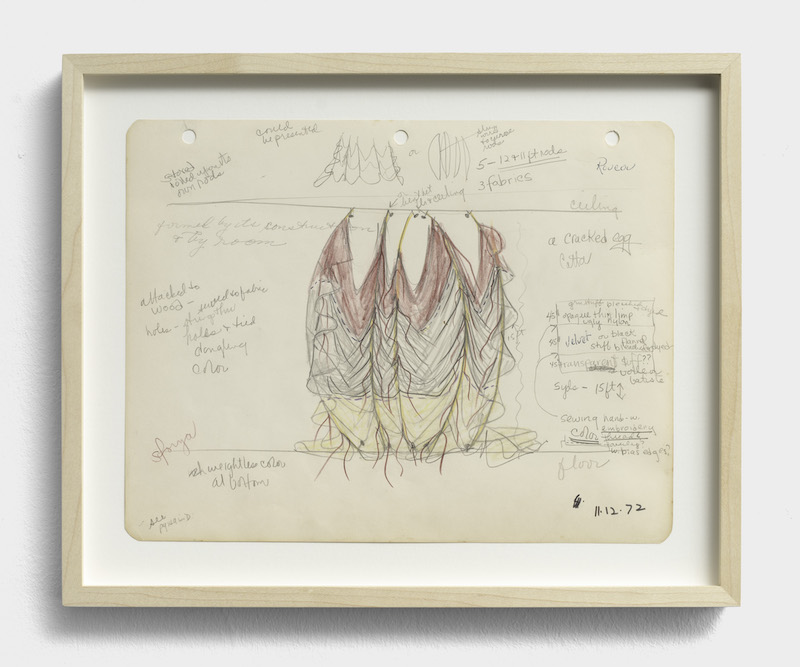 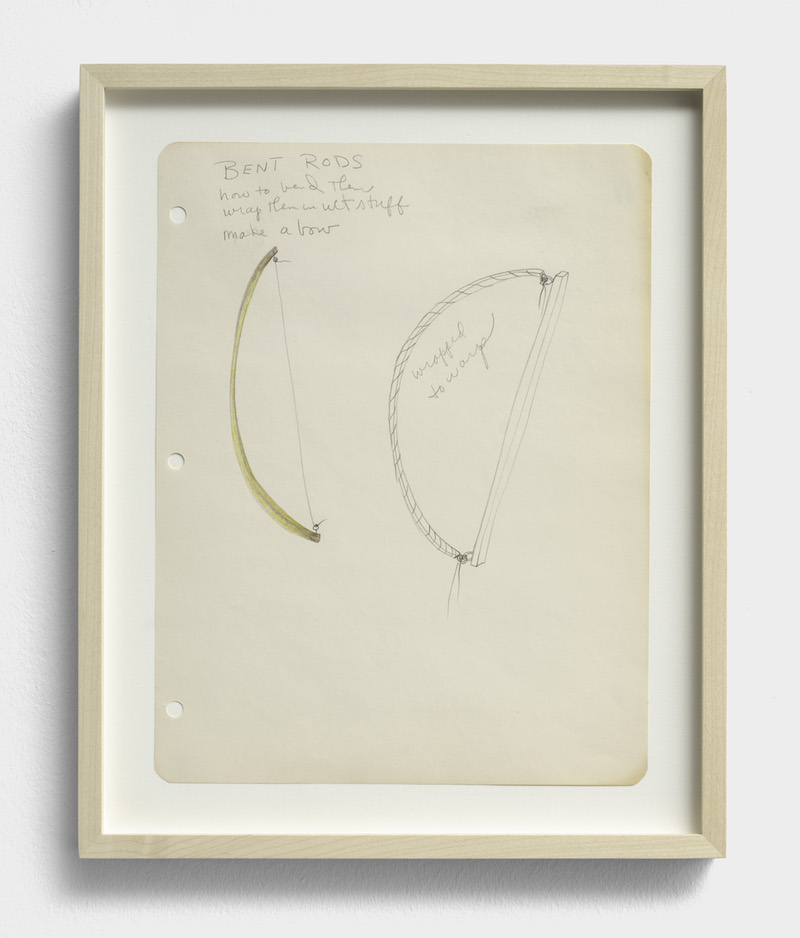 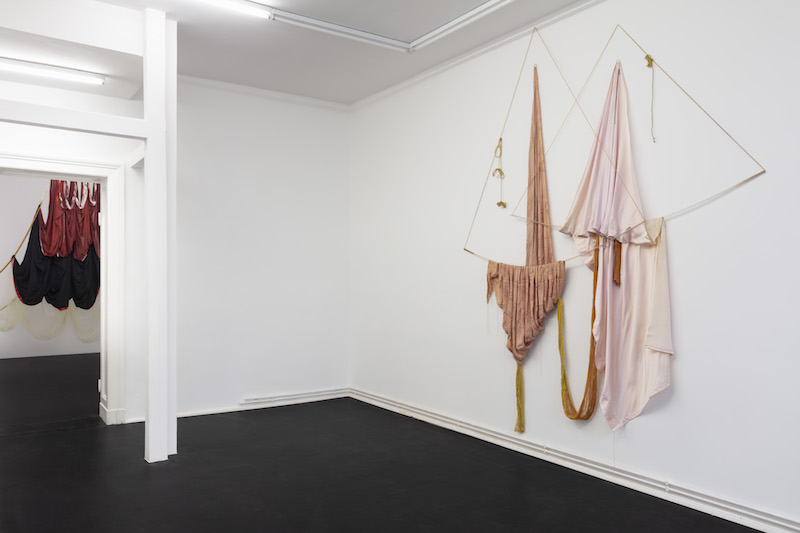 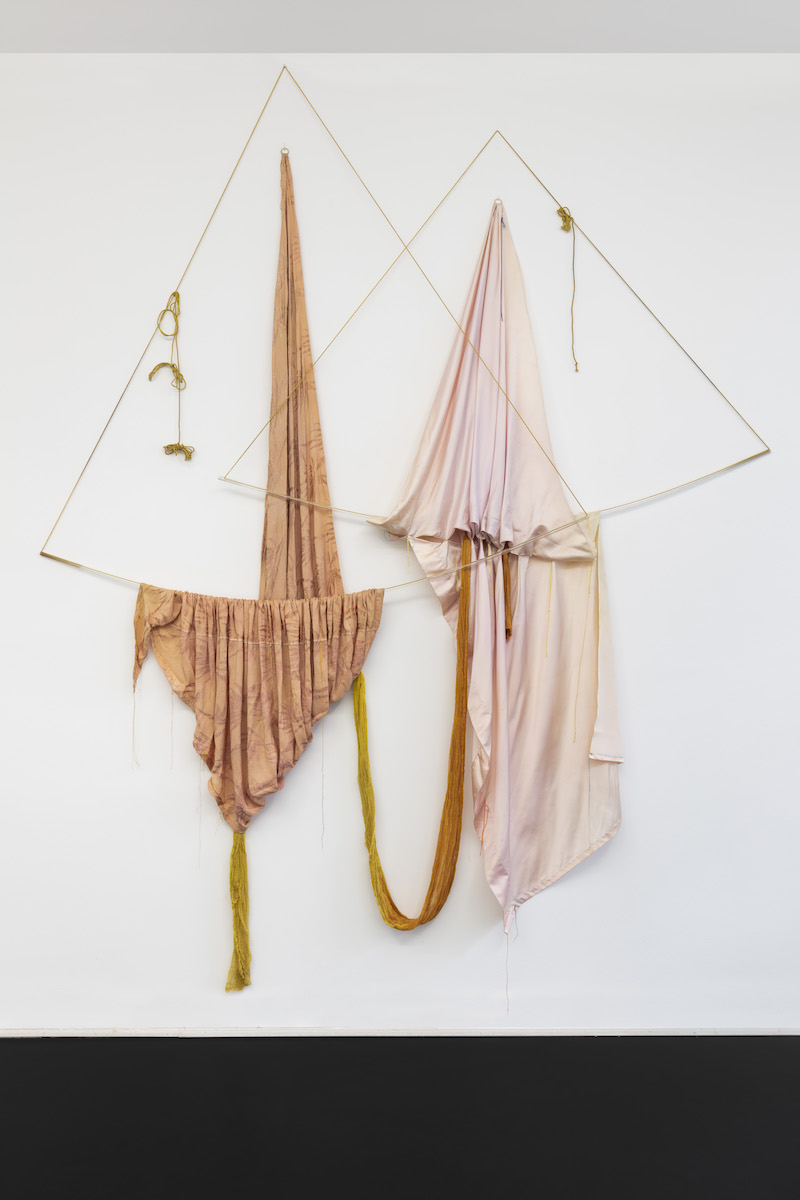 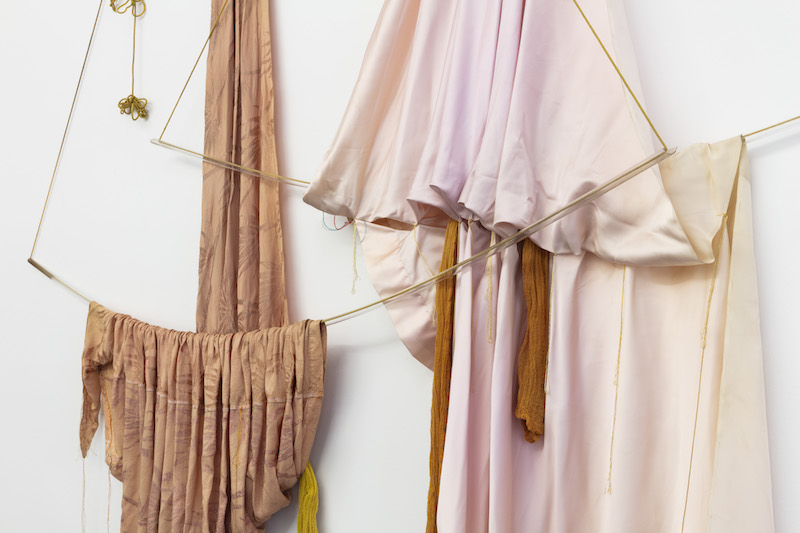 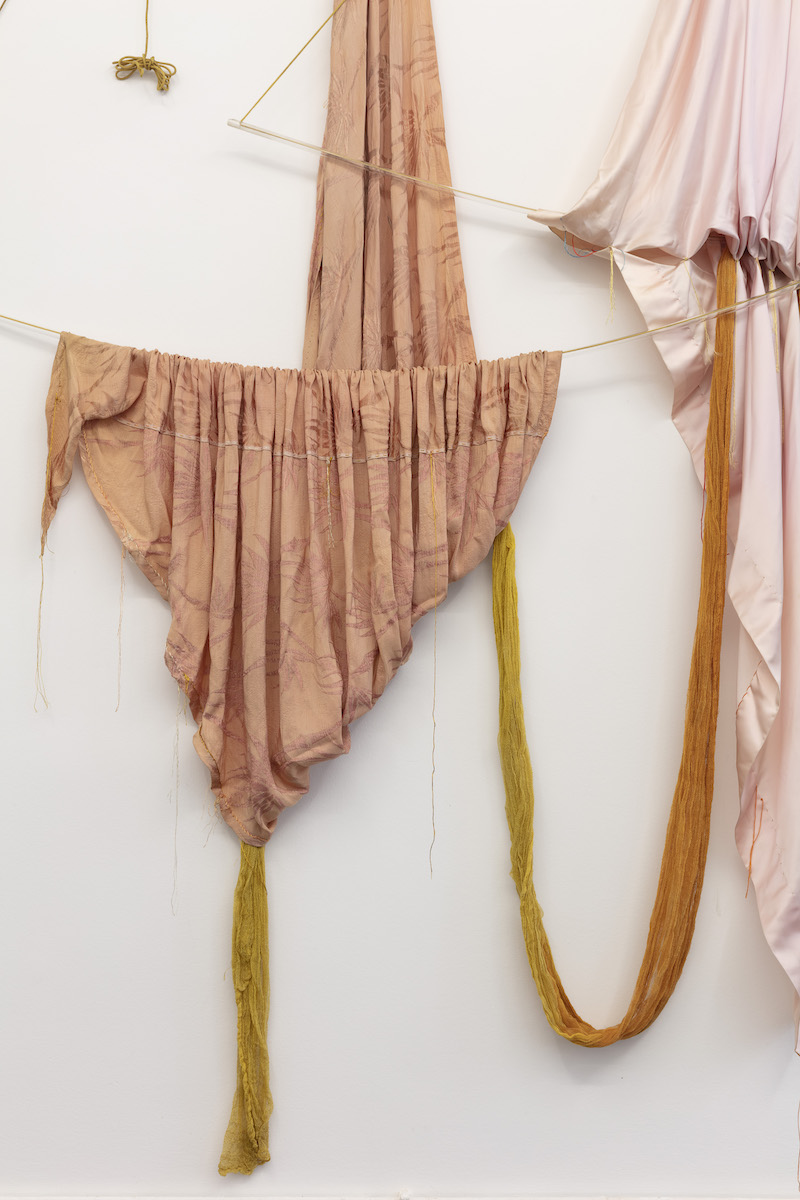 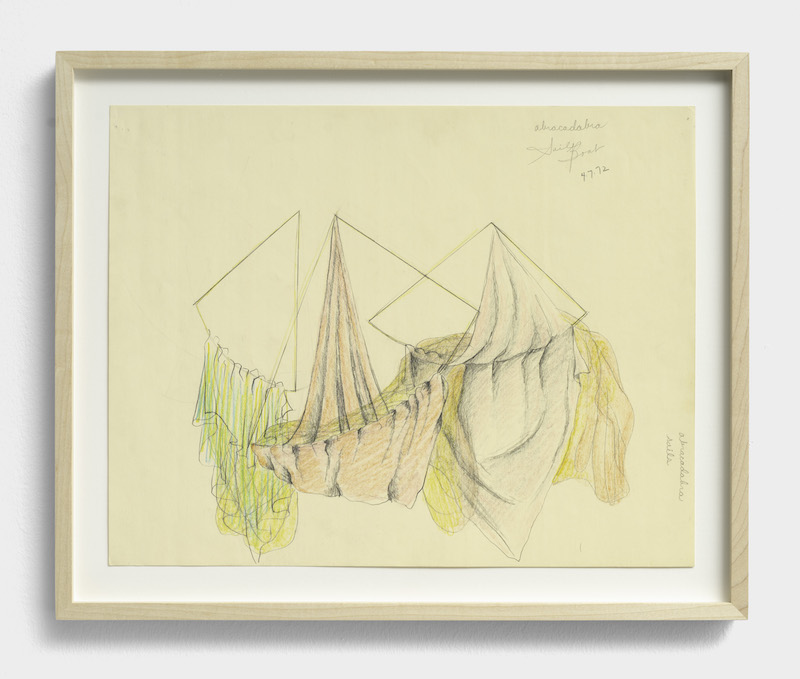 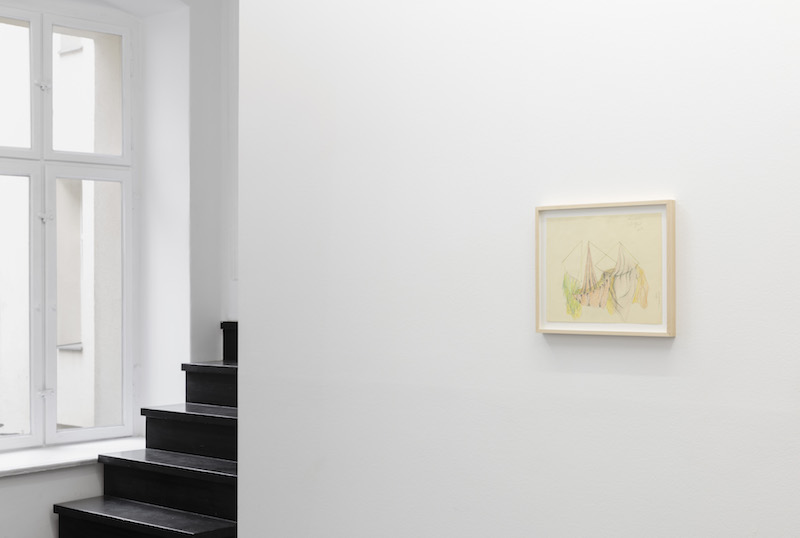 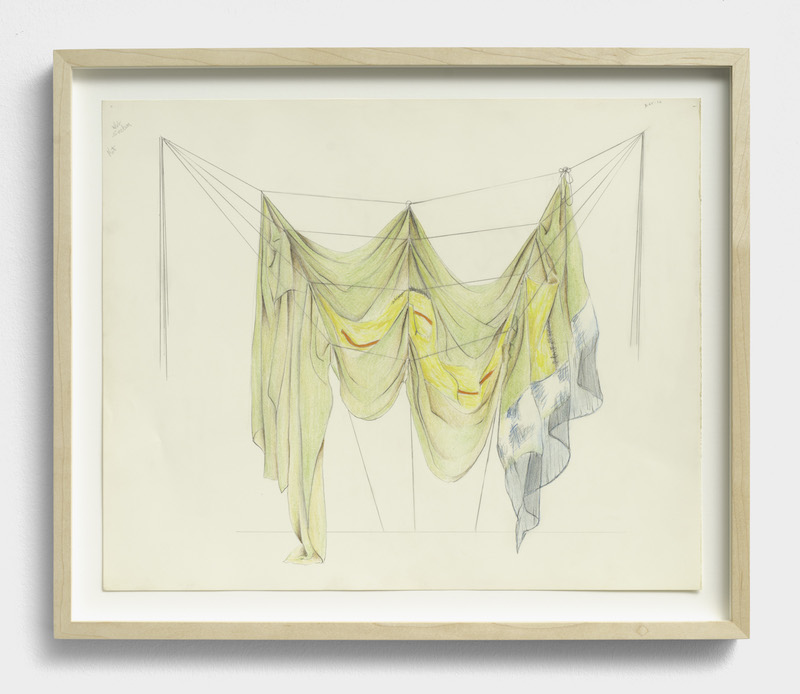 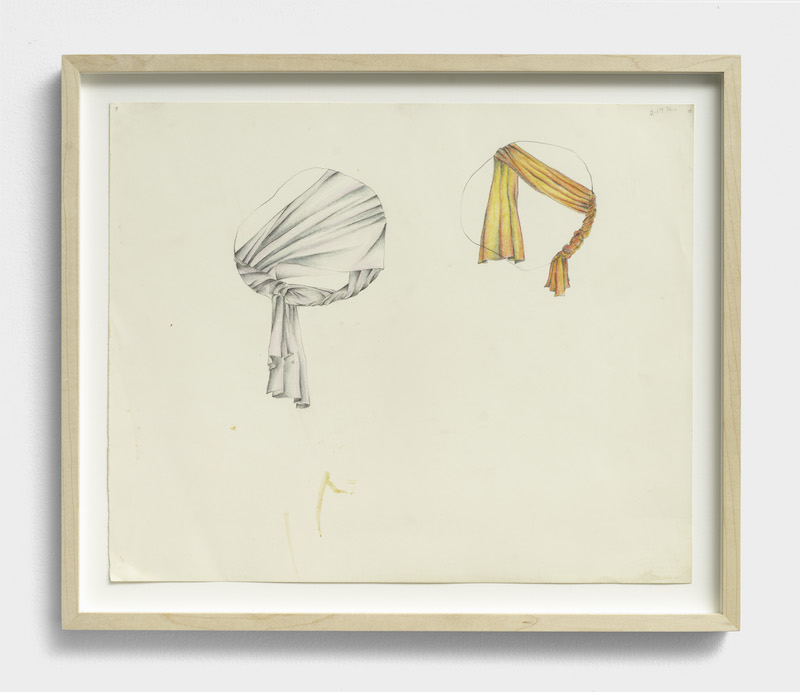 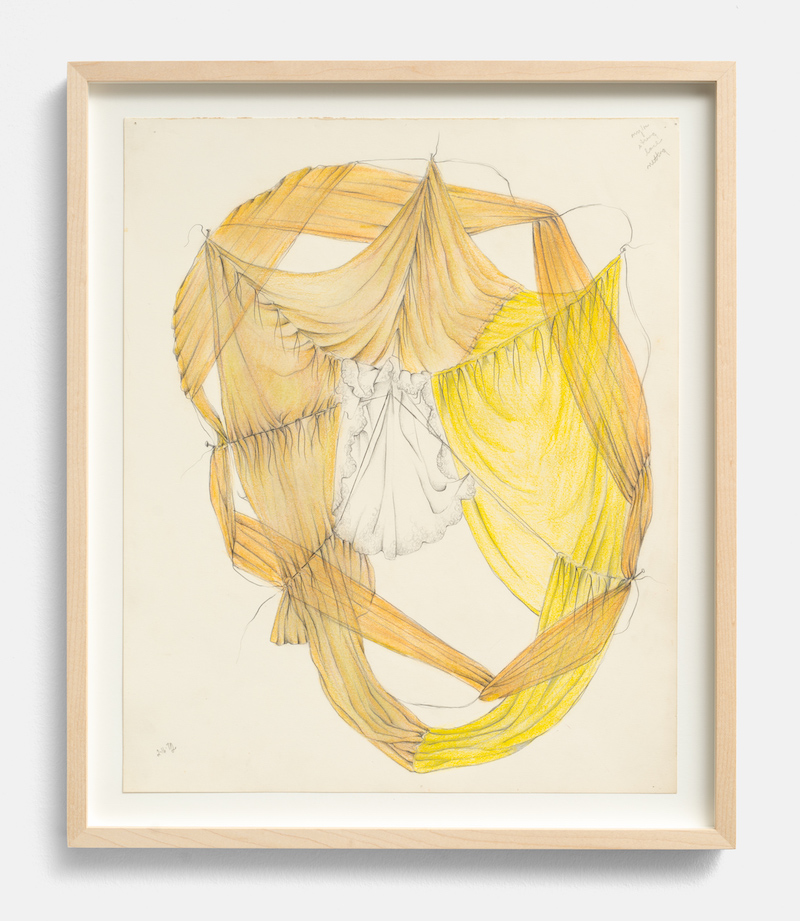 Between 1969 and 1973, Mayer’s art developed from conceptual works, including abstract studies of color, into sculptures experimenting with the medium of fabric and its mutable possibilities of form. She began working with fabric in 1970, initially by deconstructing paintings, removing the canvas from stretchers and exploring the possibilities of canvas on its own. By 1972 she was working with various fabrics, determining new combinations and modes of display. Balancing (1972) epitomizes this important period of experimentation. It is composed of two bent acrylic rods, suspended by cords to create sail-like shapes upon which Mayer has draped and attached fabric in shades of pink.

In an unpublished article from 1973, Mayer explains her attraction to the material:  “Like liquids and natural phenomenon, fabric too is subject to gravity and natural forces. Its forms are accidental and inevitable. Like waves in water or leaves on trees, in reality fabric forms are never the same. Only when reproduced in a two dimensional medium can fabric forms be seen still and definite. Fabric is a man-made substance which shares the visual characteristics of natural phenomena.” (*1)

By 1973, she had further developed her practice formally and conceptually. Her 1973 work, Hroswitha was named after the medieval German poet and dramatist, reflecting her growing interest in various historical women who became the inspiration for a series of sculptures (*2). These works consist of translucent swathes of colorful fabrics – silks, cheesecloths, and nylons –  adhered to a largely concealed wooden structure. Through the use of bent wooden bows, these works move away from the wall and project into space, as well as indicate a symbolic departure from painting.

These works evoke myth and history in a manner radically distinct from the approach of minimalist male artists, who favored durable materials such as steel and concrete. In the employment of draped, layered, and suspended fabric, Mayer implicates the visceral and the unseen, or, in her words, a “presence caught in thin veils, films of color on color.” Through her historical evocations and use of traditionally feminine materials, Mayer shines new light upon these overlooked women, while inserting herself into a historically male tradition of commemoration and monument-making.

Her fascination with the history of women was informed by her involvement in a feminist consciousness-raising group as well as A.I.R. Gallery (*3), the first artist- directed and maintained gallery for and by women artists in the United States. In 1972, Mayer, along with 19 other artists, founded the space as a platform for artistic opportunity and inclusivity, during a period dominated by male artists. Mayer participated in the inaugural exhibition (*4) and had a solo show there the next year. Rods Bent Into Bows includes archival documentation of this seminal exhibition, which included three of her sculptures: Hroswitha (1973), Galla Placidia (1973), The Catherines (1973). 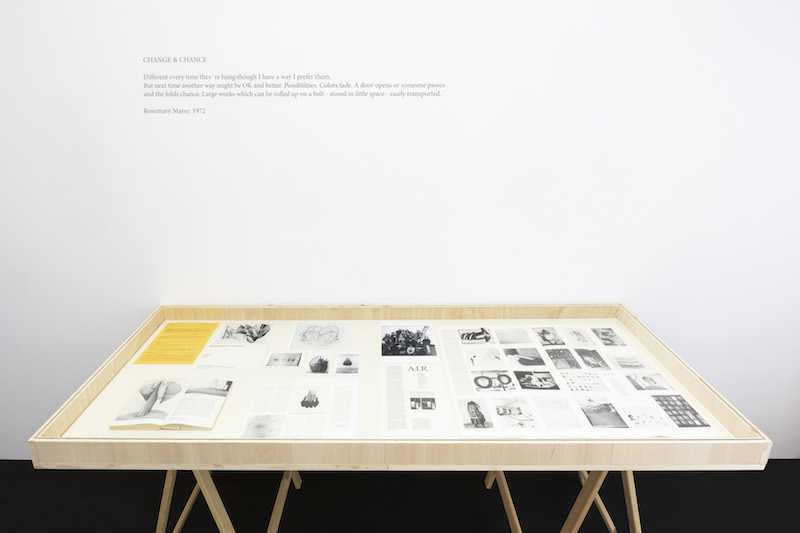 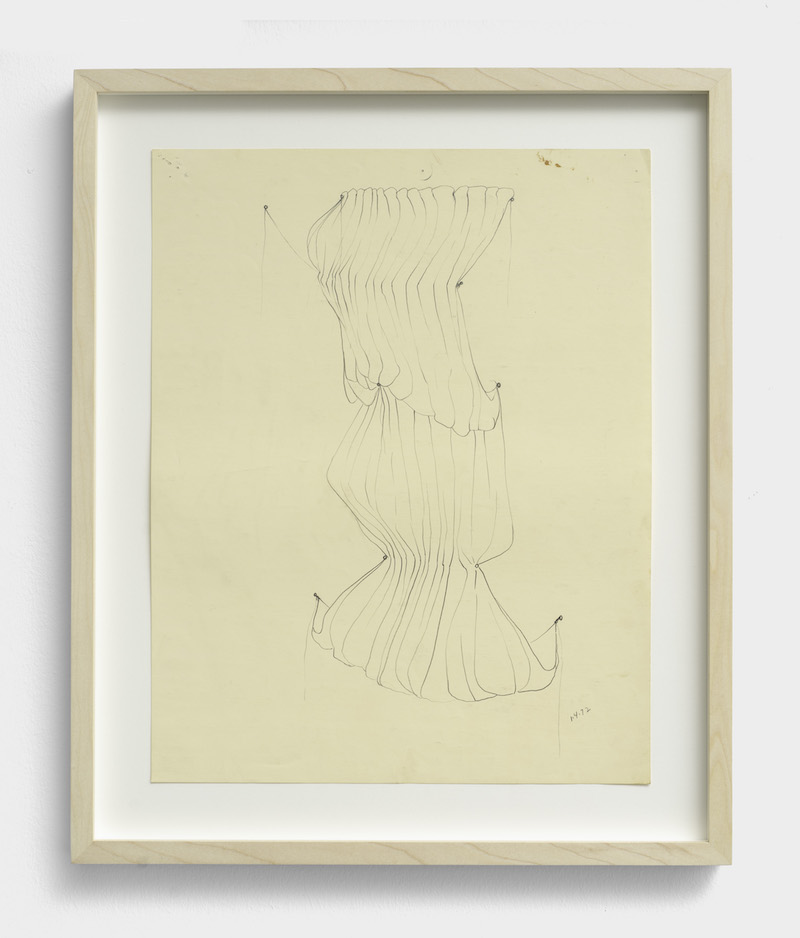 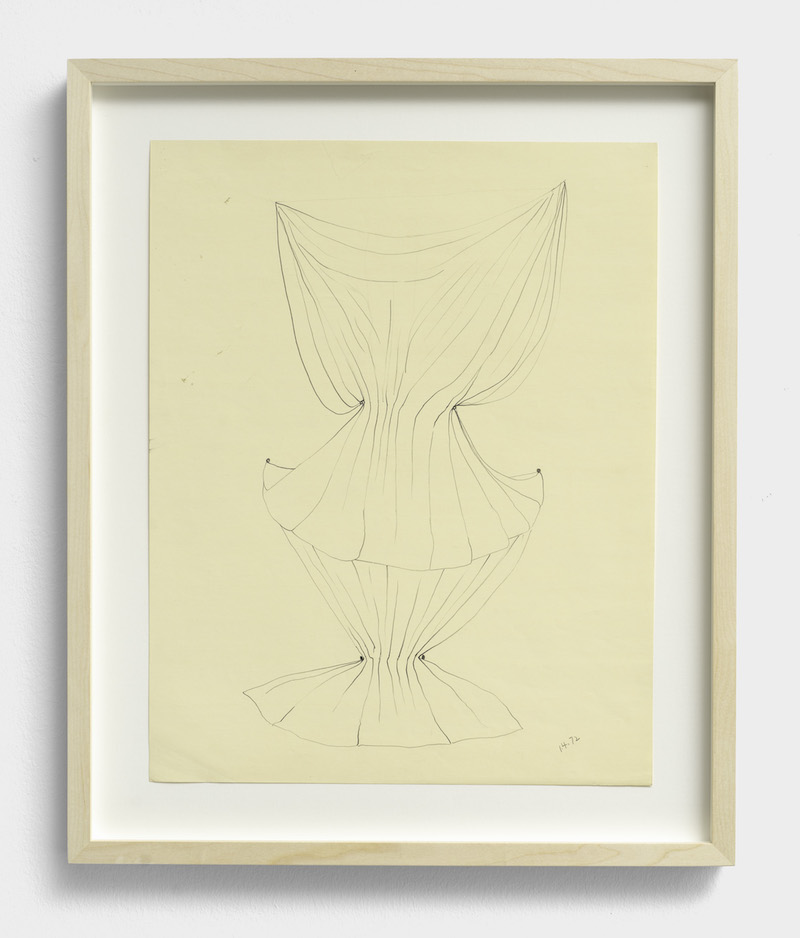 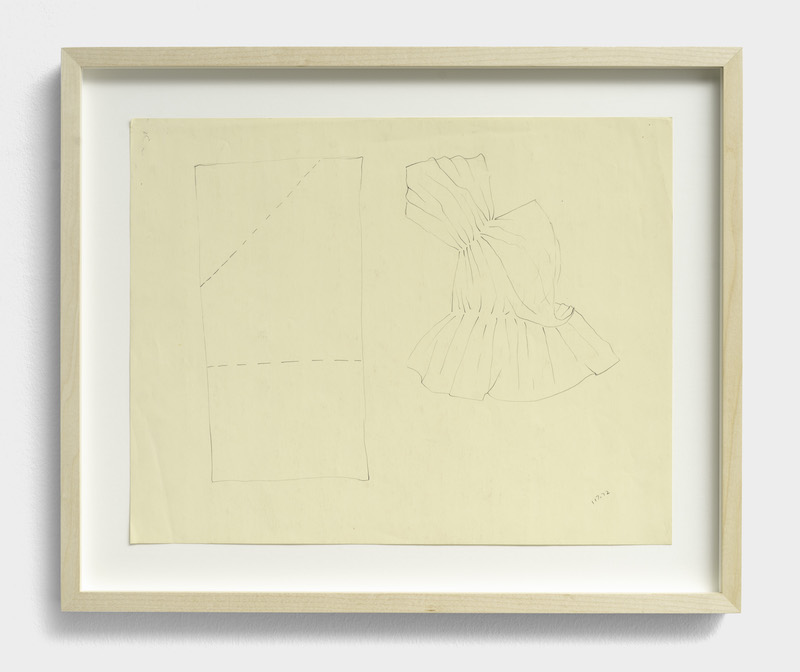 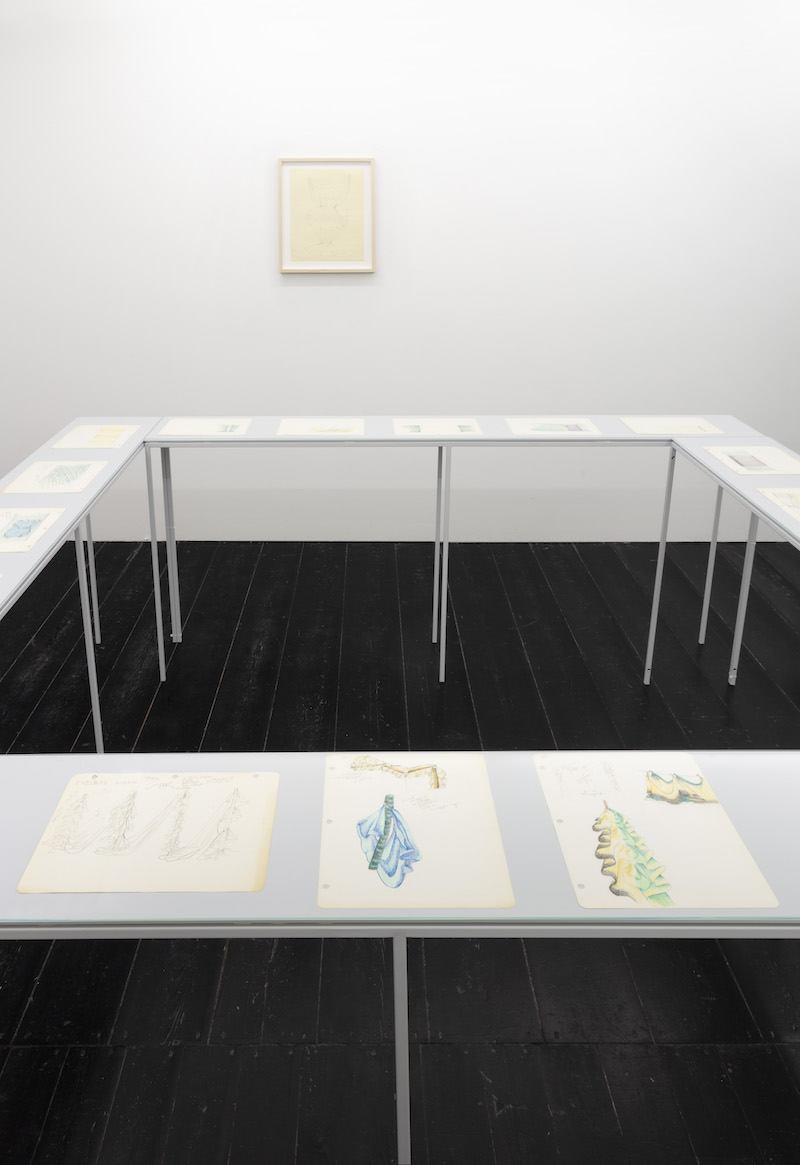 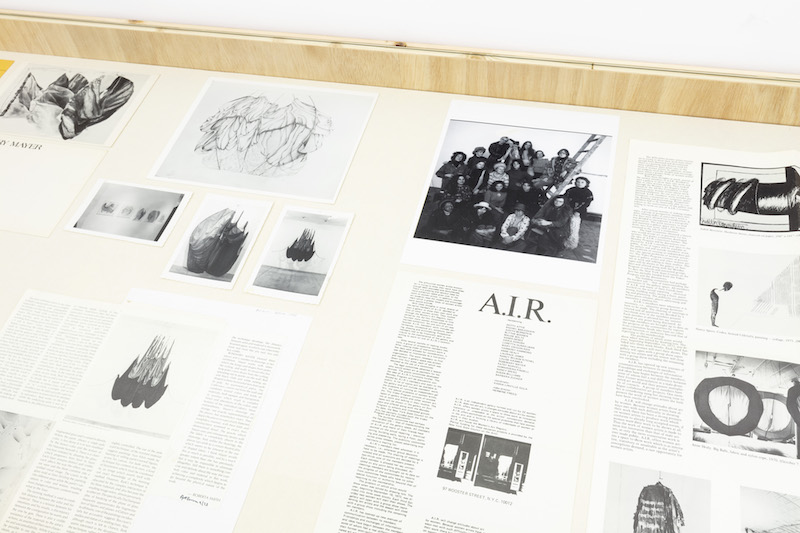 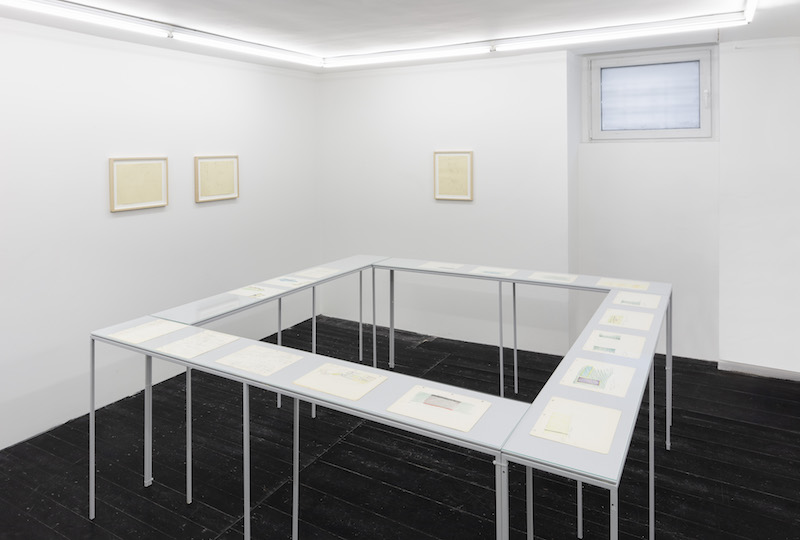 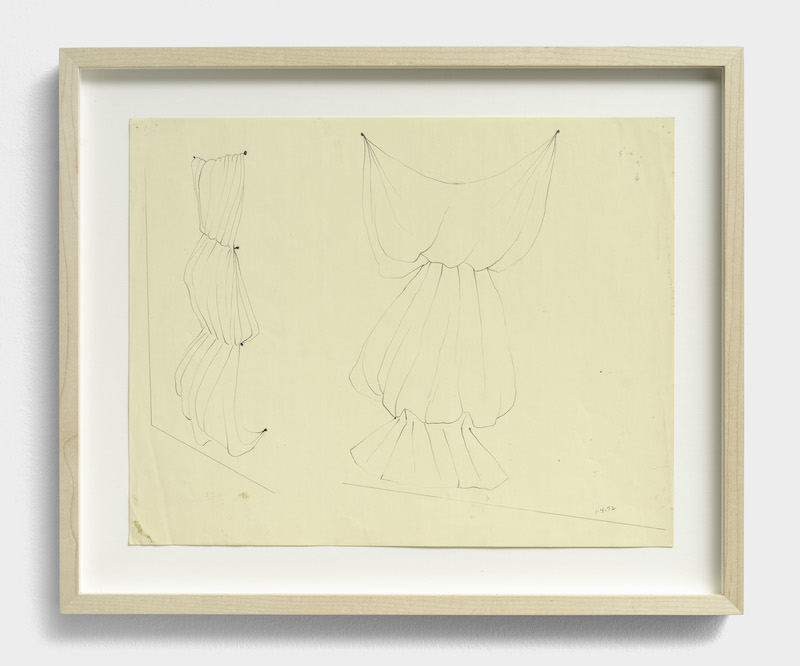 Drawings hold a significant place in Mayer’s oeuvre as expressions of inspiration, meticulous studies of shape and color, as well as precise renderings of her sculptures. Rods Bent into Bows includes several of Mayer’s drawings, many of them depicting sculptures that are now lost, and a series called Endless Work (1972), envisioned for an installation at A.I.R. Gallery. The drawings reflect her ongoing exploration of the tension between painting and sculpture. In her 1972 artist statement, Mayer details the relationship of drawings to permanence, “Drawings as permanent records, reminders for small spaces.”

The exhibition is realized in close collaboration with the Estate of Rosemary Mayer, New York. We would like to thank James Walsh and Amanda Friedman for their  indispensable help throughout the process.

A prolific artist and writer as well as active participant in feminist artistic discourses, Mayer was intimately involved within a close-knit network of fellow artists, scholars and gallerists, including artist Adrian Piper; her sister and poet Bernadette Mayer; former spouse and artist Vito Acconci; artist Ree Morton; writer, art critic and curator Lawrence Alloway, and many others.

Mayer was also a writer and art critic and was engaged in numerous art writing, literary, and publishing projects throughout her career. In addition to the text that accompanied or was integrated into much of her work, she translated Pontormo’s Diary, a 16th century Italian Mannerist artist’s diary, which was published with a catalogue of her work. She produced an issue of Art Rite, the New York-based proto-punk zine that defined post-conceptualism and contributed to several issues of 0 TO 9, a journal of experimental art and writing edited by Bernadette Mayer and Vito Acconci. In her later years as an art professor, she worked on projects illustrating epics, such as Beowulf and the Epic of Gilgamesh. Mayer kept a journal for most of her life, which elucidates the intricate relationships she had with her cohort and provides insight into her art-making and writing projects.

Throughout her artistic career, Mayer’s work was exhibited at numerous alternative art spaces in New York, including The Clocktower, Sculpture Center and Franklin Furnace, as well as several university galleries. In 2016, Southfirst Gallery in Brooklyn held a major exhibition of her work, igniting a renewed interest in her work. In 2017, the Museum of Modern Art acquired some of Mayer’s drawings and artist books from the 1970s. Her work was recently on view in the group exhibition, Bizarre Silks, Private Imaginings and Narrative Facts, etc., curated by Nick Mauss at Kunsthalle Basel, Switzerland. Mayer will have a solo exhibition at the Swiss Institute, New York, in 2021.

The article was dedicated to the work of Morris Louis, specifically his series of works The Veils.

Mayer’s works referencing historical woman include the following, as described by her:

Hroswitha, 1973: “The title refers to Hroswitha, a German Latin poet of Gandersheim in Saxony. The nuns of Hroswitha’s convent performed her plays for the court of Theophano (of Byzantium) and Otto I, c. 980. Hroswitha originated the themes of Faust and Romeo and Juliet.”

Galla Placidia, 1973: Galla Placidia is the name of a Roman empress, who was born into nepotism as the daughter of an emperor and was involved in political strategizing and arrangements her whole life. After short marriages to a Visigothic king and the Roman co-emperor Constantius III, the empress became the virtual ruler of the western world for 12 years as regent for her young son Valentinian III. Mayer wrote, “The title refers to Galla Placidia, who from 425 A.D. until her death in 450, ruled the Western Roman Empire, from Rome and later Ravenna, for her incompetent son Valentinian III, the last more or less legitimate Emperor of the West.”

The Catherines, 1973: “The title refers to the many Catherines in recorded history, including: Catherine Sforza, Lady of Forli and Imola, who was a rival of Lorenzo dei Medici for power in Tuscany, c. 1475; Catherine dei Medici, Queen of France, who ruled during the minorities of her many sons until her death in 1589; Catherine of Aragon, Queen of England, who is considered the cause of Henry VIII’s conversion of England to Protestantism; Catherine Cornaro, a Venetian noblewoman known for her beauty, who ruled as Queen of Cyprus from 1473 to 1489; Catherine I of Russia, born into a family of servants, who ruled Russia after the death of her husband, Peter the Great; Catherine II the Great, Empress of Russia from 1762 until her death in 1796, who was responsible for much of the expansion of Russia; Catherine of Sienna, a fourteenth century mystic and author of religious dialogues and treatises, who brought about the return of the Pope to Rome and was influential during the Great Schism.”

Other sculptures by Mayer inspired by historic women included: Hypsipyle, 1973: Hypsipyle is the name of a mythological Greek princess, who becomes queen of Lemnos after the women of the city, upon Aphrodite’s scheming, killed all the men on their island except Hypsipyle’s father, who she saves by helping him escape unto sea. Variations of the tale exist in several accounts, including: the 3rd century BC Argonautica by Apollonius of Rhodes, the 1st century AD Argonautica by Latin poet Valerius Flaccus, and 1st/2nd AD Greek mythographer Apollodorus.

Hypatia, 1972: Hypatia was a Greek philosopher, astronomer and mathematician who lived from ca. 350- 415 AD.