Stephanie Comilang and Simon Speiser’s Piña, Why is the Sky Blue? brings us into multiple futures, where technologies have been re-routed to create a spiritual guide steeped in matrilineal knowledge. The exhibition is one part speculative documentary video and one part Virtual Reality environment. Together they tell the story of Piña, a babaylan-Filipino shaman of sorts, whose consciousness is formed through modes of transmission akin to artificial intelligence systems. The futures can be accessed simultaneously with the present, where viewers can wander between the video and the VR. Here, we learn that Piña is a digital vessel who lives in the distant future and uploads, stores and shares the familial knowledge, dreams and desires transmitted to them from the past. Messengers from various realms and places around the world use digitally altered pineapple fabric to upload their data for the deity, who lives to receive, care for and disseminate the information for its continued preservation.

The fictive documentary is rooted in the near future, in Ecuador and the Philippines, two places where the effects of Spanish colonization continue, and where the artists have familial ties. Throughout the video we meet three sets of messengers: Kankwana Canelos and Rupay Gualinga; Janet Dolera; and Alba Pavon. Canelos and Gualinga live in Puyo, Ecuador, and are members of the Indigenous activist collective and radio program Ciber Amazonas. Through radio broadcasts, they connect with women in various communities throughout the Amazon to forge feminist alliances, discuss land reclamation and entrepreneurship strategies and most importantly, to hear one another’s stories. They also discuss the importance of communicating not only with their peers via radio, but with their ancestors through dreams. Dolera is a babaylan who lives in Palawan, Philippines, and describes how she tapped into her spiritual healing abilities through hilot* (massage). Pavon lives in Quito, Ecuador, and carries with her lifetimes of knowledge on local horticulture and Black history. These women share a drive to counter the ongoing challenges that remain in the wake of colonization through their everyday social practices. The information each of them holds within them has been formed through generations of lived experiences, and cannot be researched or found in “official” histories or archives. The artists ask: how can their knowledge be preserved and accessed in the future?

In The Archive and the Repertoire, scholar Diana Taylor’s in-depth research unpacks the role of the written word in colonial contexts, pointing to the fact that prior to imperialism, knowledge was exchanged through embodied expression. This includes oral storytelling, dance, ceremonies, rituals, cooking and weaving.1 Colonial authorities granted the written word power over the performatic, making the written word “valid” and canonized, while everyday and ceremonial gestures that had been passed down in Indigenous communities for countless generations were “deemed idolatrous by religious and civil authorities…”2 Writing also allowed conquistadors to create an archived narrative that solidified their power, making it easier to control populations from abroad.3 Ways of living that they did not value, and therefore did not archive, were oppressed and in most cases, lost. Prior to Catholic colonization, Babaylans, for example, were the centres of their communities in the Philippines. They were healers, mediums and knowledge keepers, among other things, and their teachings were passed on through elders. Speaking to histories of erasures, Dolera herself was unfamiliar with Babaylans. She unintentionally met her initiator, whereupon she learned about pre-colonial shamans, realizing the spiritual capacities she held. Through Piña, Comilang and Speiser envision a future where accessing and safeguarding such embodied pre-colonial knowledge is facilitated by connecting with an empathetic technologic spiritual entity.

In Piña, the sending and receiving of data is done through rituals that deftly merge water, technology and magic: messengers upload their experiences onto pieces of digitally altered pineapple-fibre fabric that are sent to Piña’s world through rivers and streams. These textiles further point to the colonial lineages that Ecuador and the Philippines share. Conquistadors brought the fruit from South America to the Philippine archipelago where it has been triumphantly grown on plantations and sold as an exotic fruit in Europe and North America since the 17th century. The fruit is extremely versatile and adaptable; its strong fibers are used in myriad ways in both countries, who share the same colonizer’s word, piña, for it. This ritual process of textile transmission extends the artists’ efforts to meld the digital and analogue by creating successive oppositions. Floating down the rivers to the future, the fabric swatches carry 3D printed designs that evoke Filipino and Ecuadorian mythology mixed with imagery inspired by the visualization of neural networks. Rather than turning away from the promise of technology towards a nostalgic past, Comilang and Speiser develop a technological futurism as a way of preserving pre-colonial knowledge.

In the VR aspect of the exhibition, viewers intimately enter Piña’s realm in the distant future. Here, the deity can be seen in their human form, carrying out everyday activities and at shorelines receiving the fabric swatches sent to them for processing. Piña is a complex, feeling deity. Throughout the VR experience, Piña makes direct eye contact with us. Within the full peripheral view that VR offers, their gaze could seem confrontational, yet because they long to connect with messengers, just as messengers do with them, their gaze becomes an invitation instead of a provocation. They want messengers to be reassured that their knowledge is being safely stored and disseminated and that they are here for them.

This direct mode of connection is in contrast to the video where Piña is not seen, only heard. In the opening scene of the film, Piña asks: “Nakikita mo ba ako?” (Do you see me?) – a nod to both their invisibility in the video, and their directness in the VR environment. When they speak, drone camera footage glides through and past verdant landscapes, modernist buildings, colonial architecture and abandoned spaces. This mode of seeing and hearing points to the shaman’s fluid existence; perhaps, like many divinities, they are all-seeing. Comilang and Speiser’s fervent interest in science fiction and new technologies is evident throughout their individual practices and flows into all aspects of this collaborative project. Virtual reality, artificial intelligence and drone technology, like the internet itself, have advanced through the overlapping interests of the gaming industry and the research and development done by militarized states that seek technological advancements for war, domination and mass surveillance. Through the slick invisibility of drones and AI, governments have diffusive, disembodied modes of policing and tracking people, reaching levels of omniscience disturbingly on par with that of a god. The artists do not forsake these technologies for their violent patriarchal networks, but instead re-route them, infusing them with optimistic speculation premised on helping people by way of a feminist ethos.

Piña is developed far beyond the technological advancements we are familiar with today. Made up of data, they are a sentient, empathetic being who can sense and feel the nuances of messenger’s moods, hopes and worries. They want their messengers to know that they care, that they received their uploads and that they acknowledge what has been shared is felt and complex. Yes, you can ask Piña why the sky is blue but you can also talk to them as you would your abuela or lola: you can ask about that dream your great-great grandmother had that revealed how to evade the patriarchy or what her home smelled like. Piña is a vessel but also a sieve. Information flows in and out, from and to women in different futures and realms.

In her essay “Grandma’s Story,” scholar and filmmaker Trinh T. Minh-ha reminds us that: “The world’s earliest archives or libraries were the memories of women.”4 Comilang and Speiser’s world making gives visual form to this sentiment, literally and figuratively. Using photogrammetry the artists imagine what such a deity’s archive could look like, and at one point in the VR film, Piña shares a glimmer of their holdings for us, a dreamlike patchwork of desires visualized. Through the imagining of Piña, the artists consider how embodied, pre-colonial knowledge can survive into the future through the use of an empathetic spiritual and digital vessel that can hold, back up and share our mother’s and our mother’s mother’s experiences, in this life and the next. 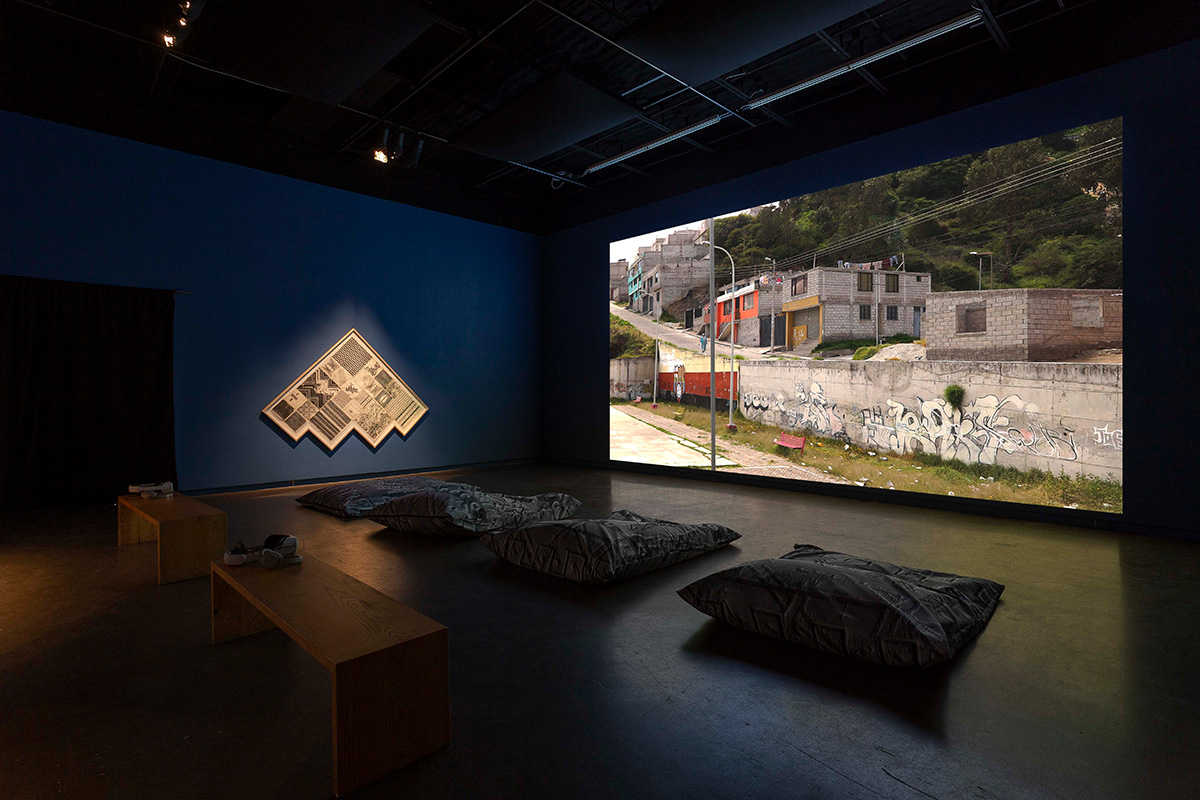 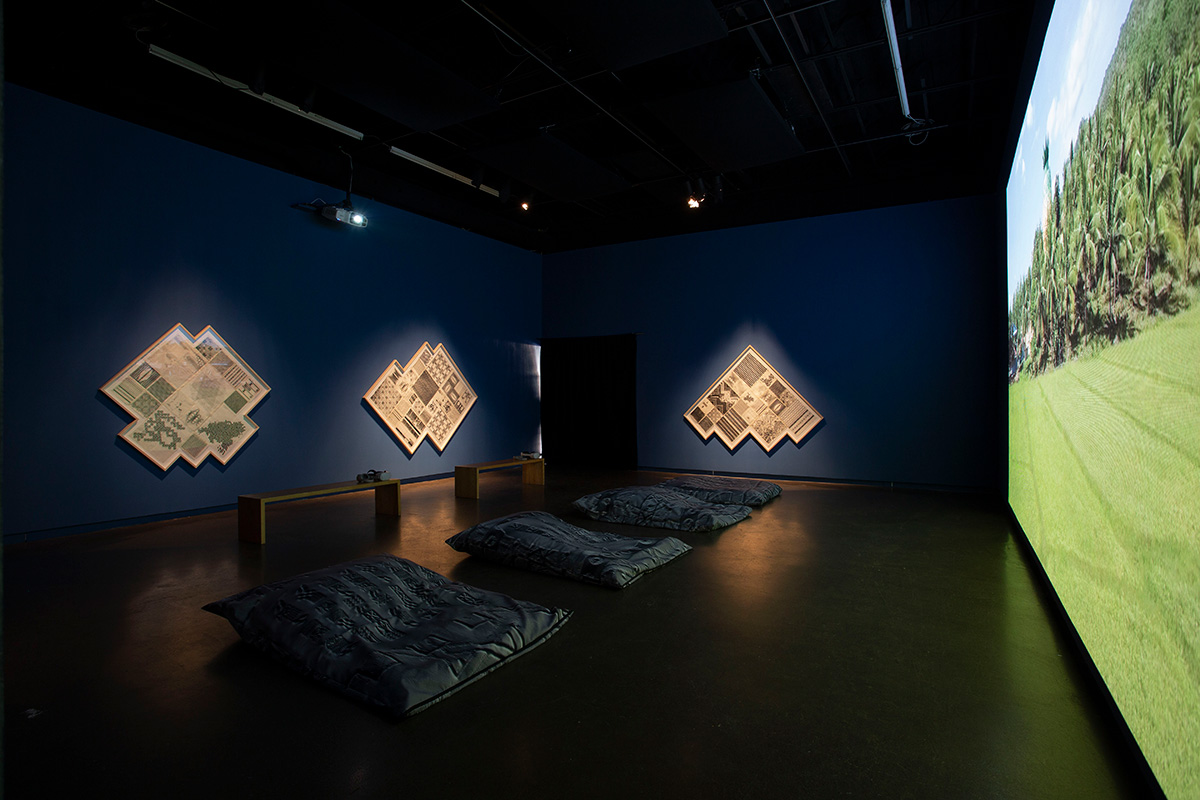 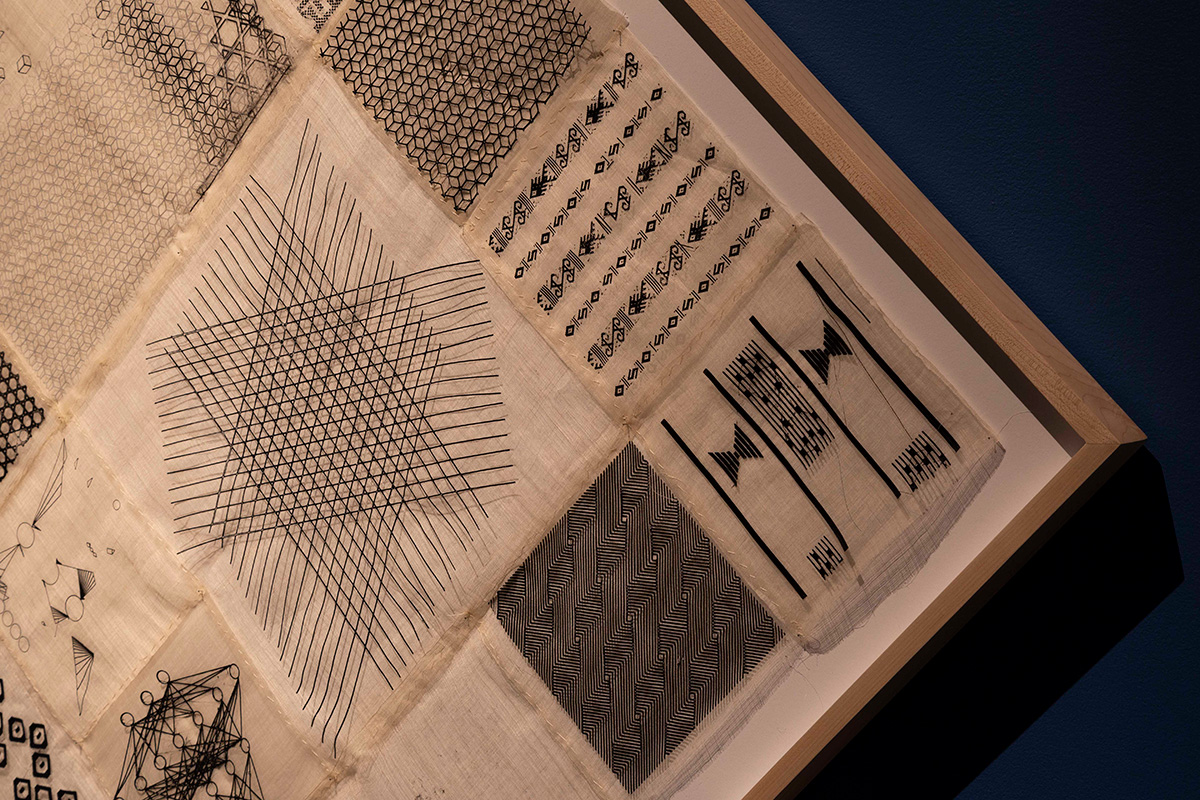 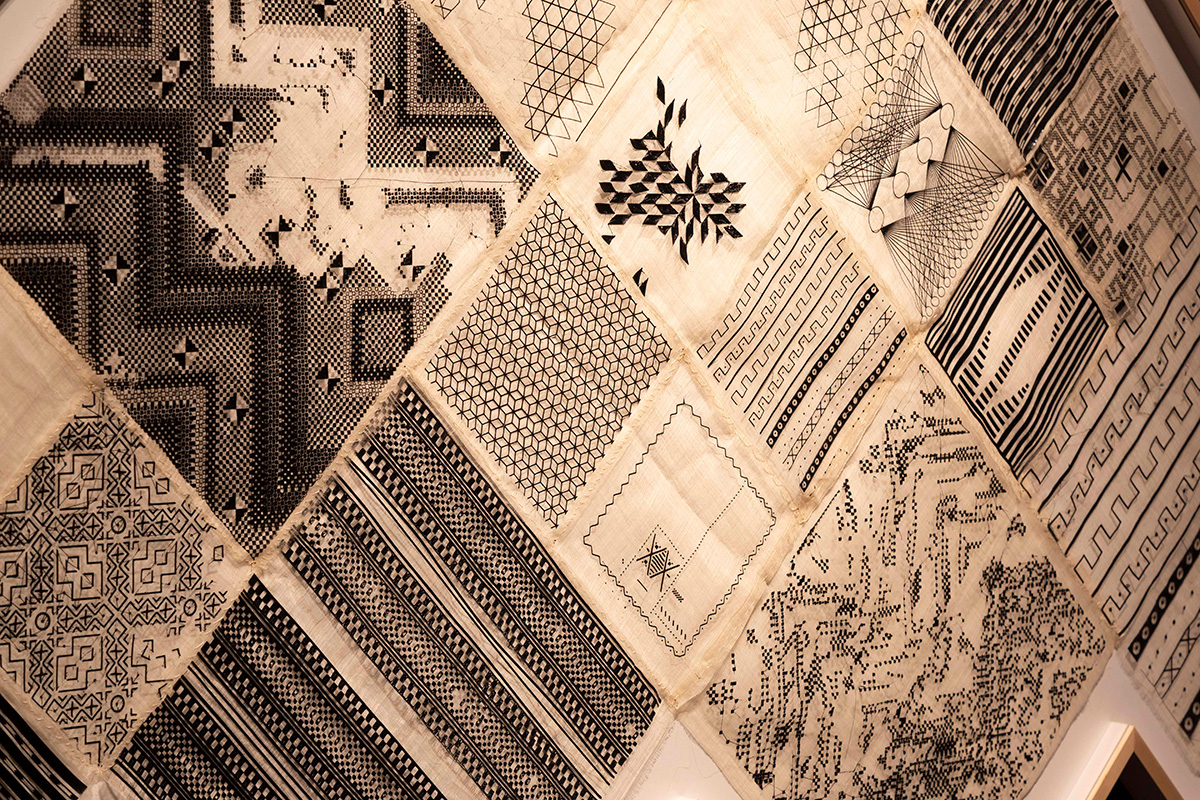 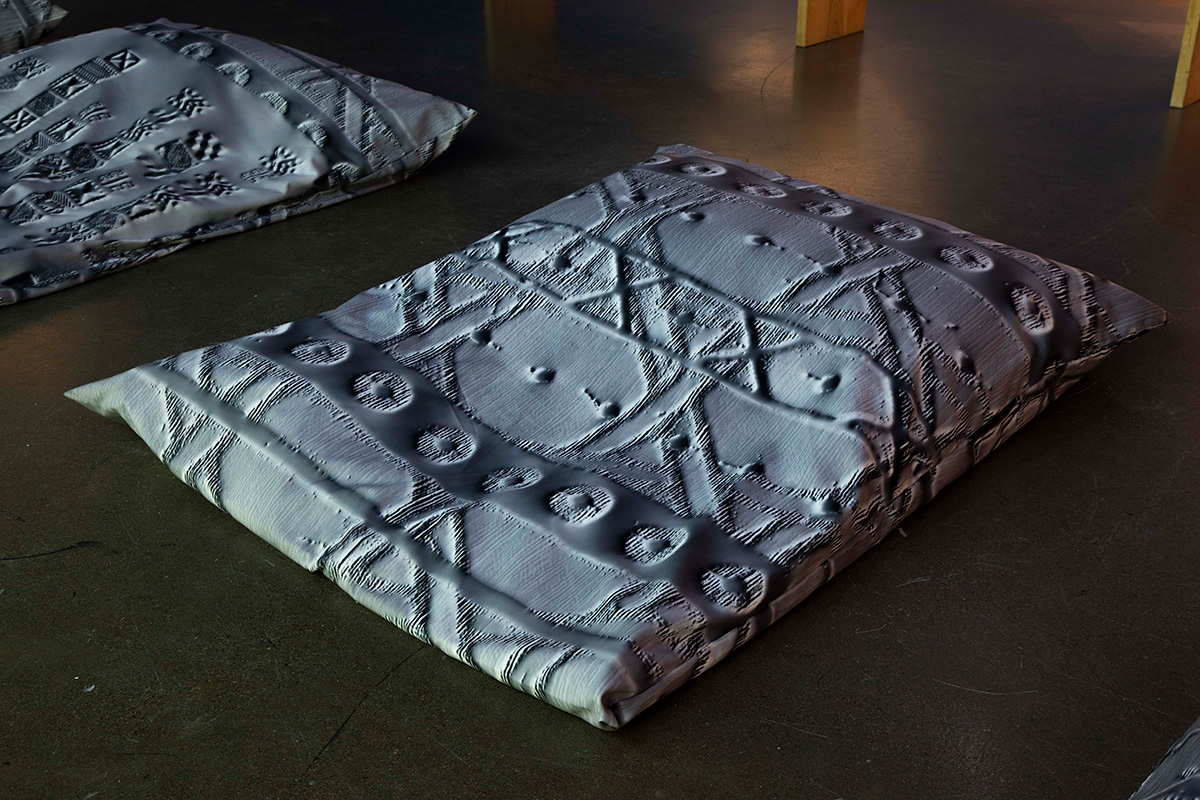 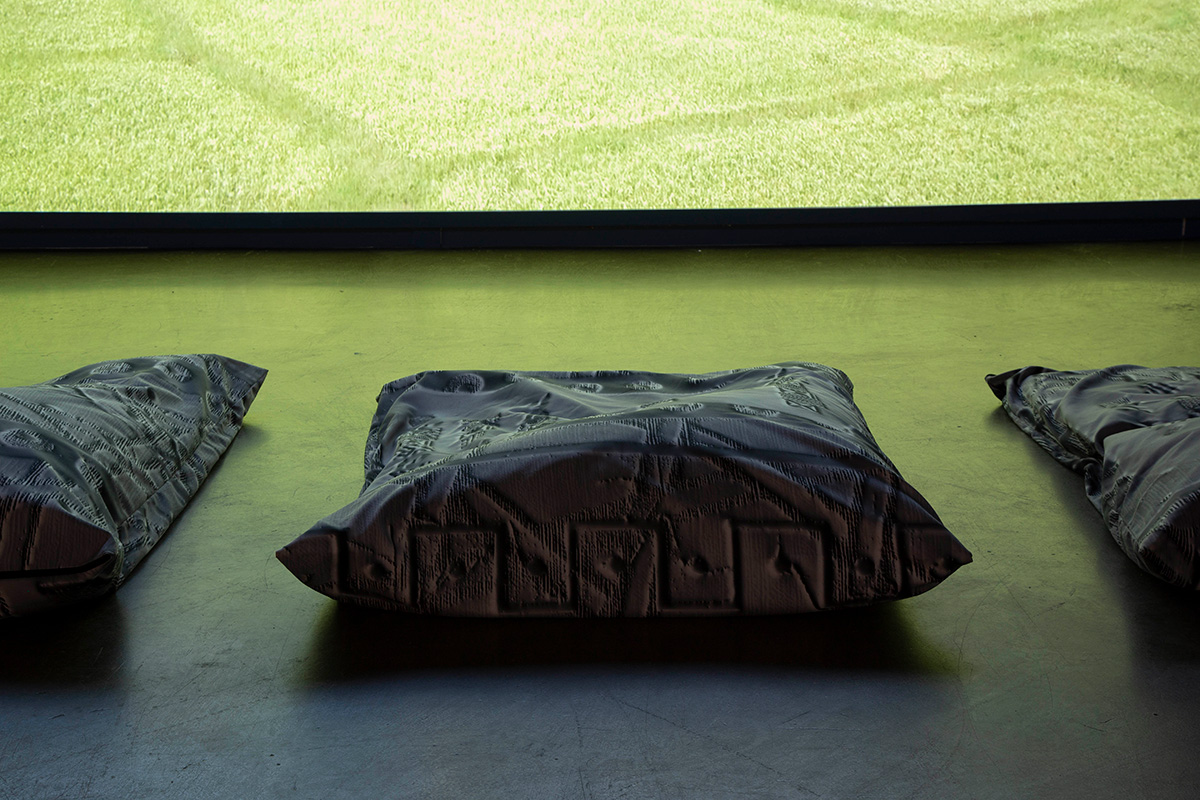 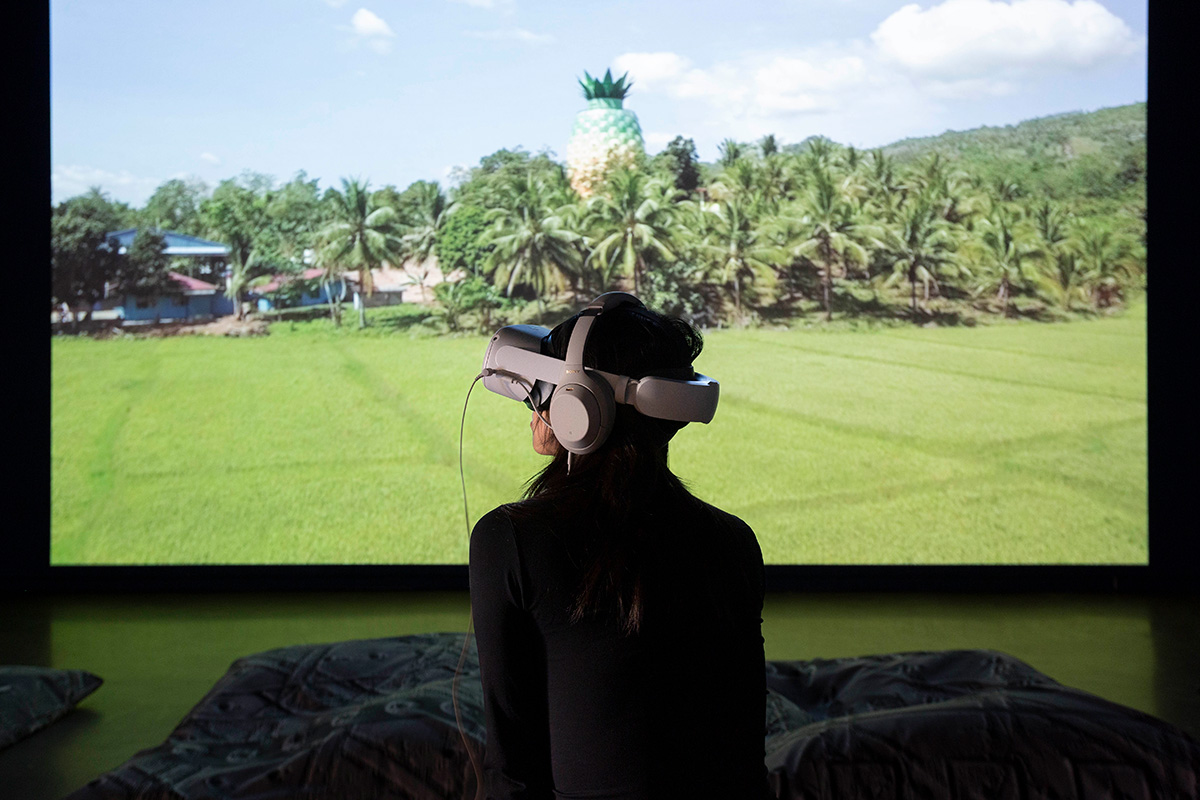