The exhibition My Fifty Years In A Nutshell is constructed around the artist’s alter ego, Mr. Peanut, with drawings, videos, photographs, paintings, and archival materials narrating this long and ongoing love story. Together with recently produced ink and wash on paper drawings, the exhibition focuses on the 20 day performance Mayoralty Campaign of 1974, which featured John Mitchell as ideator of the peanut campaign, campaign manager and spokesperson. It was an event that brought many diverse artists and groups together in a collaborative context. The campaign fulfilled a real alternative to the political status quo. Art had become life. 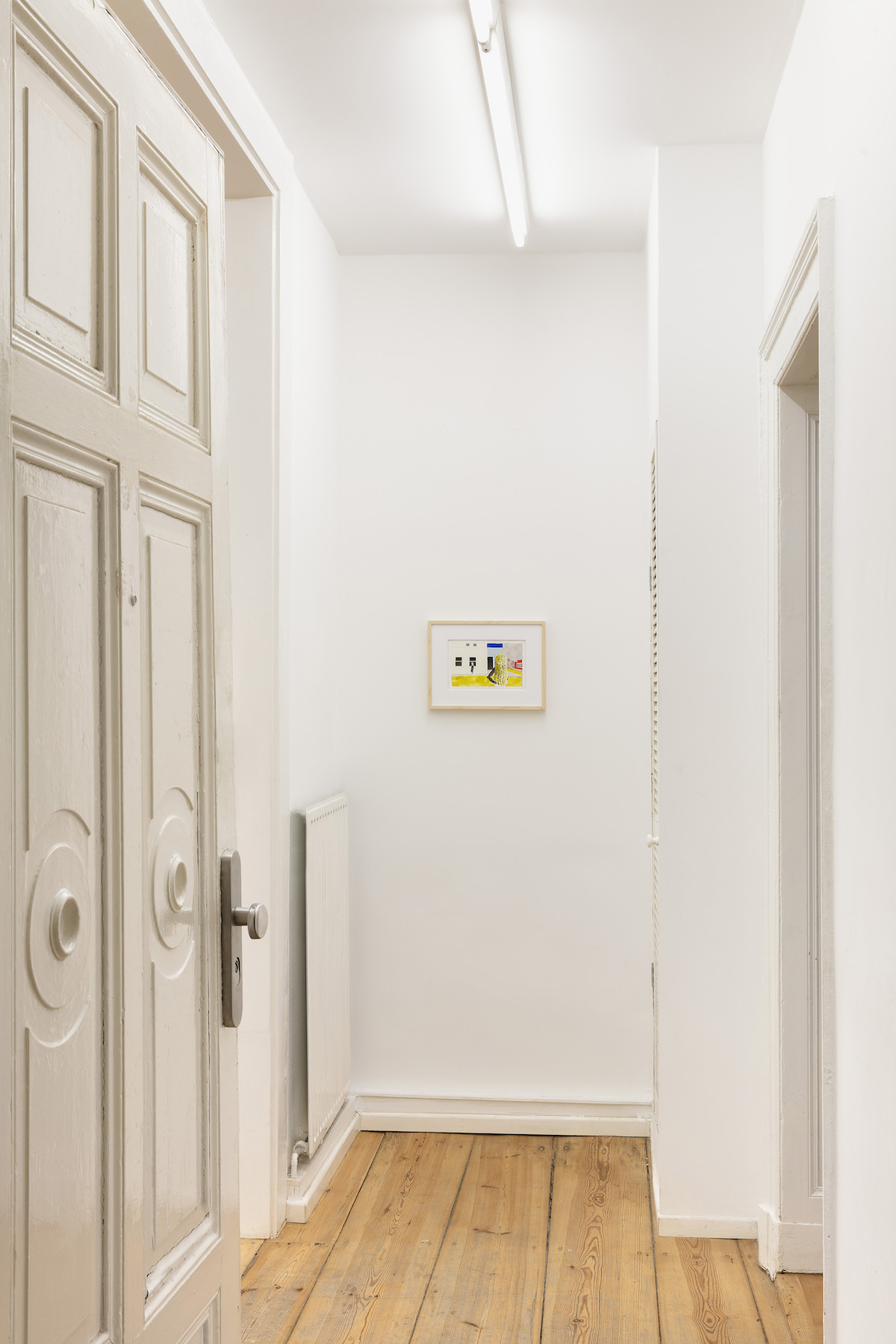 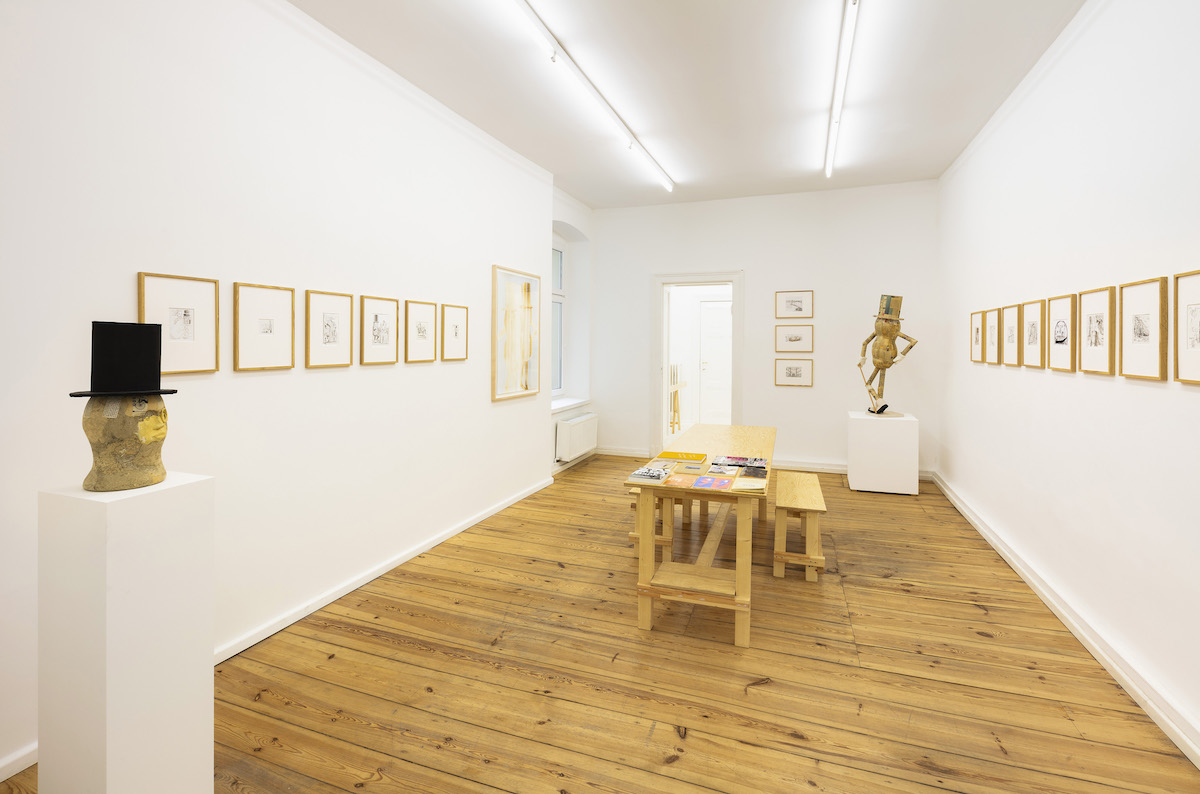 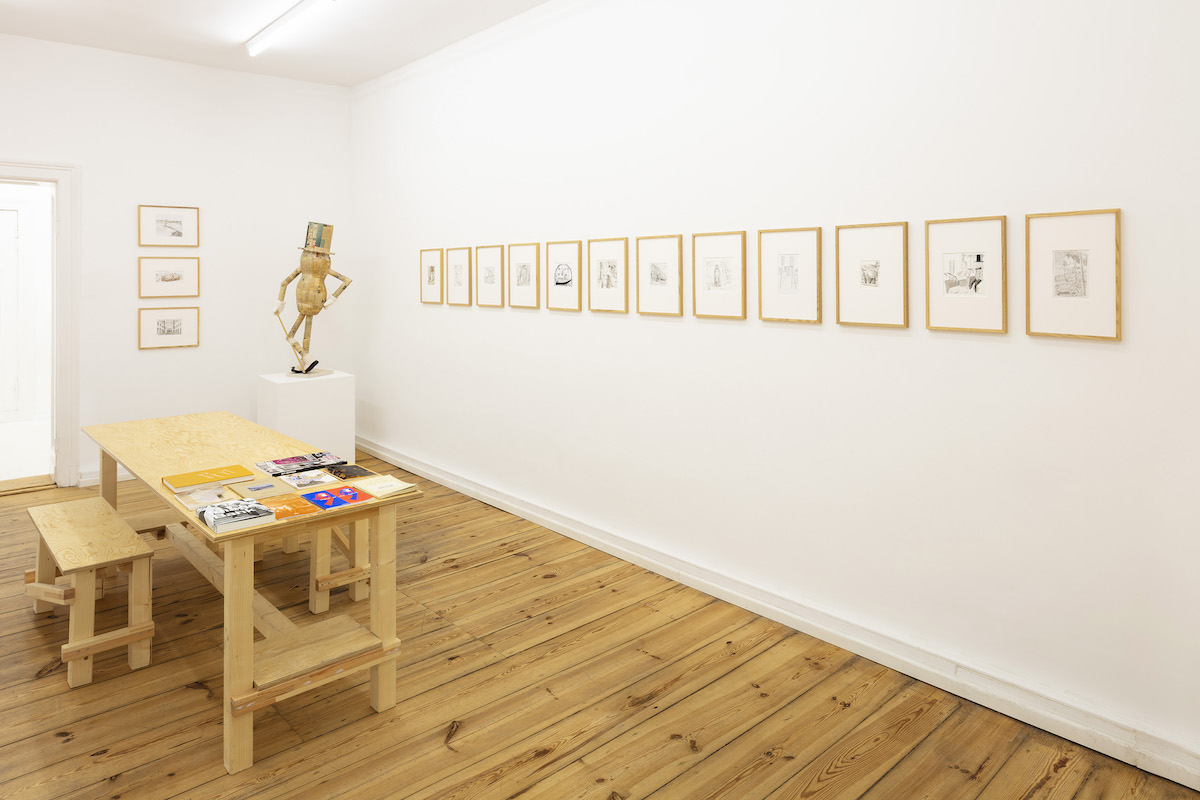 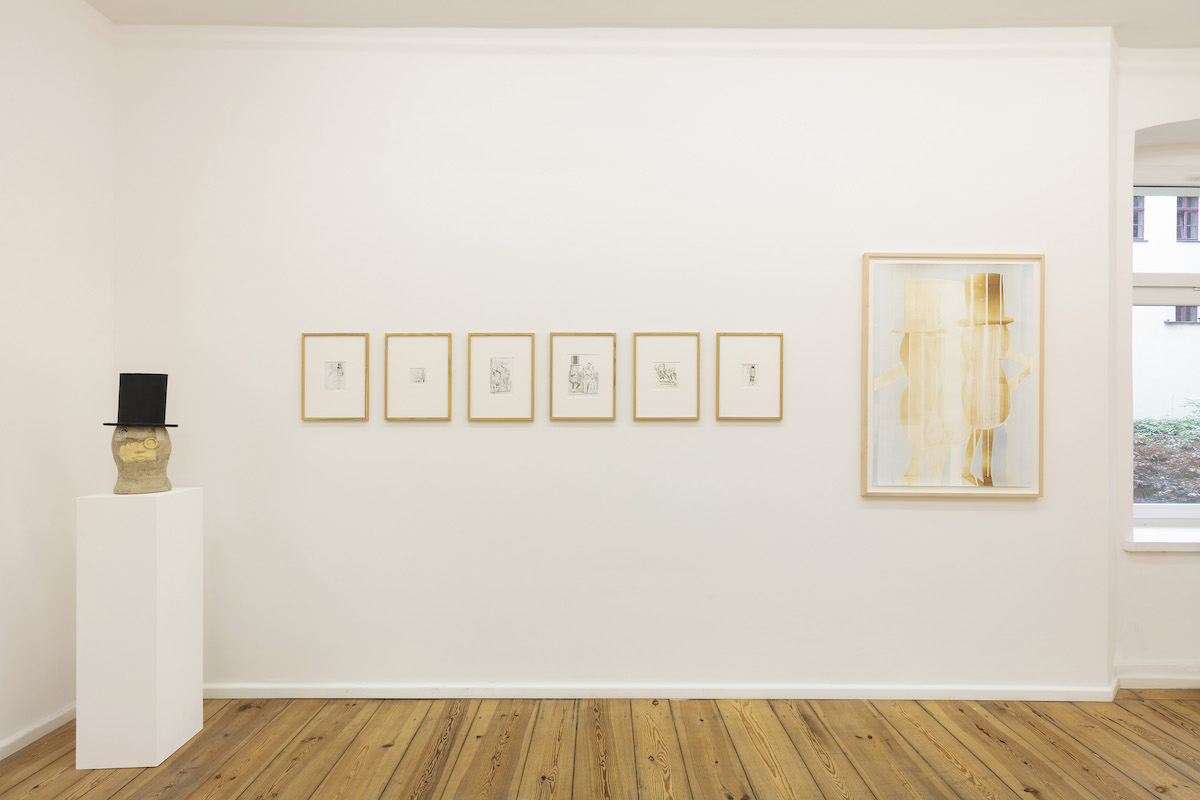 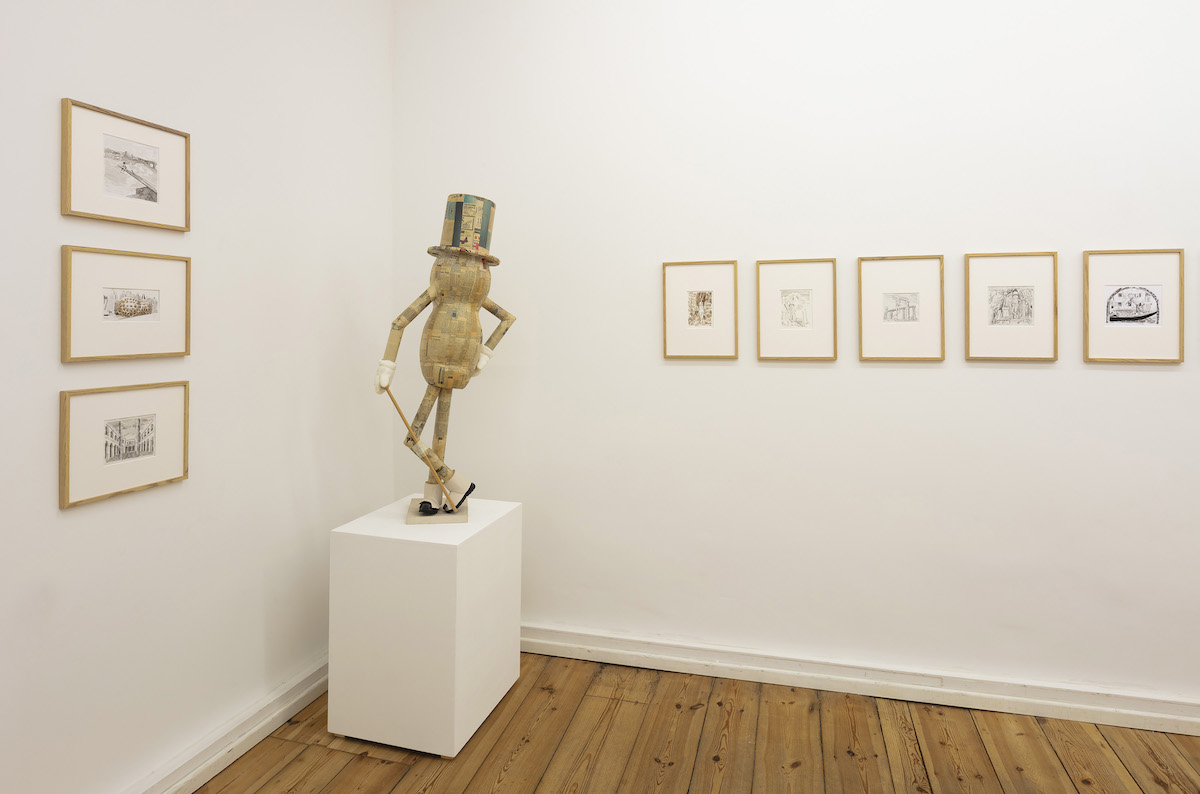 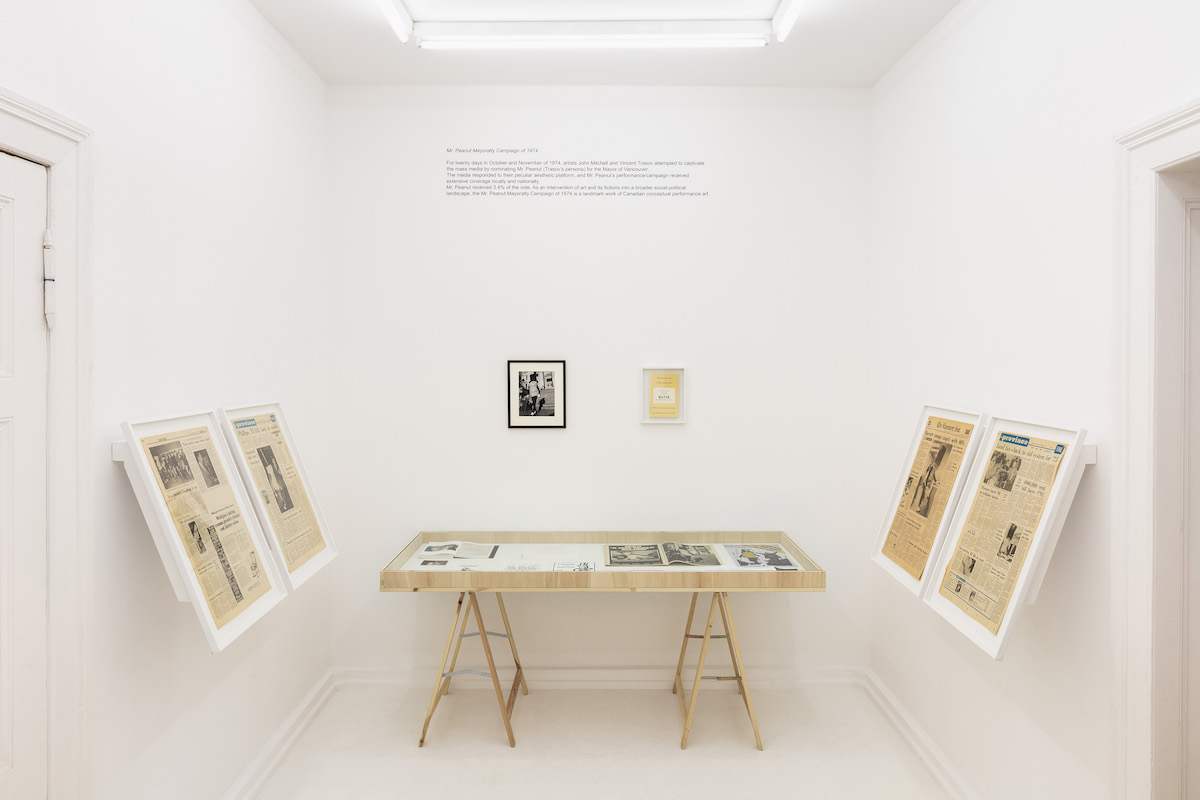 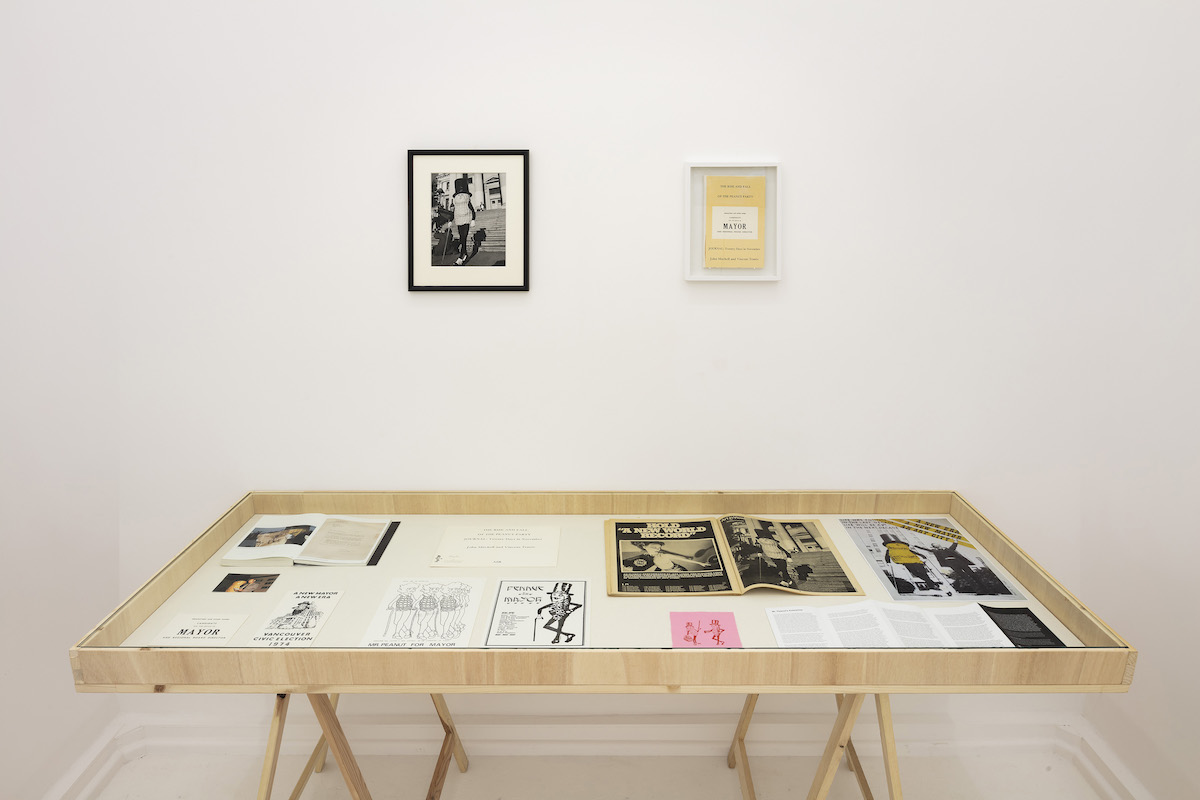 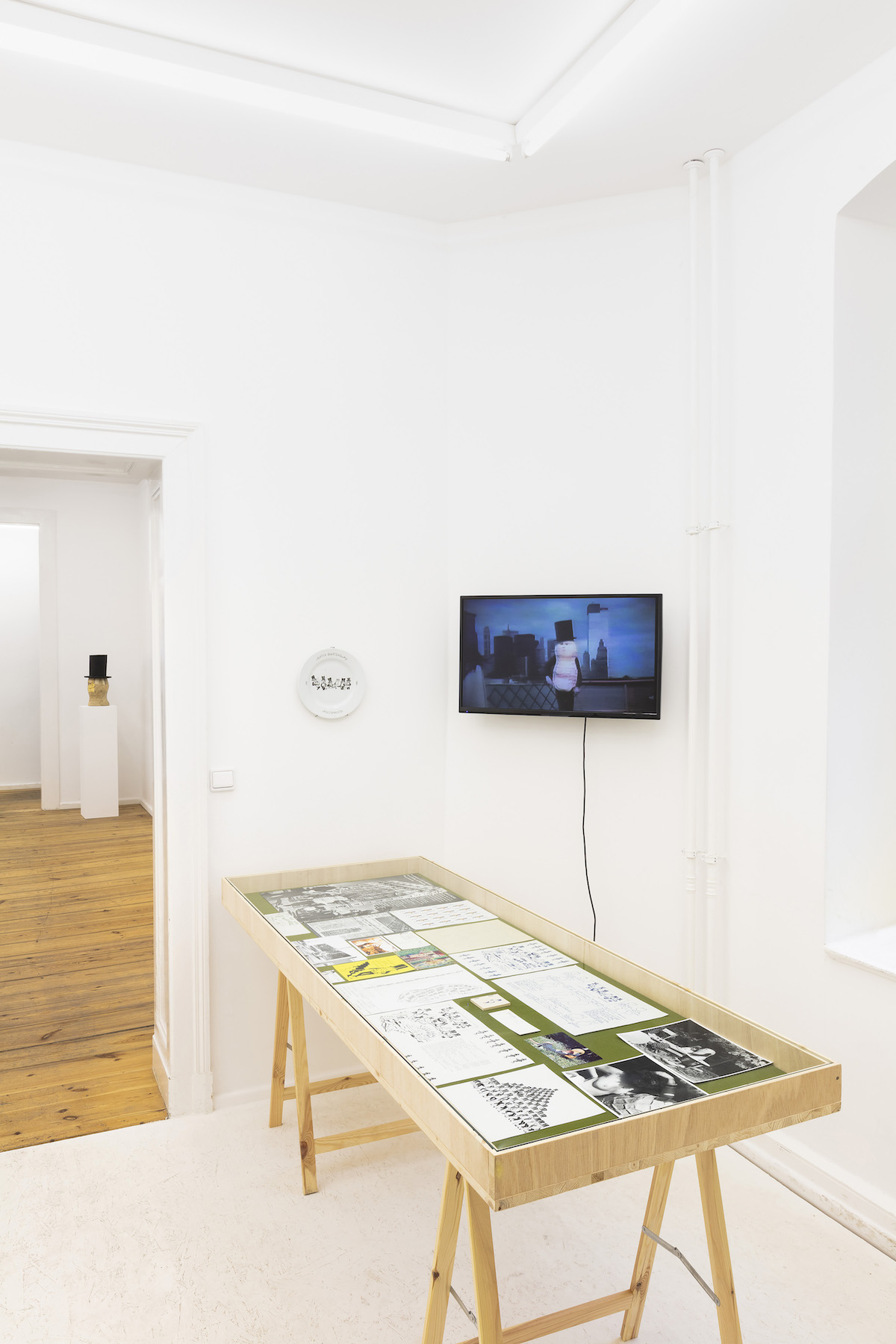 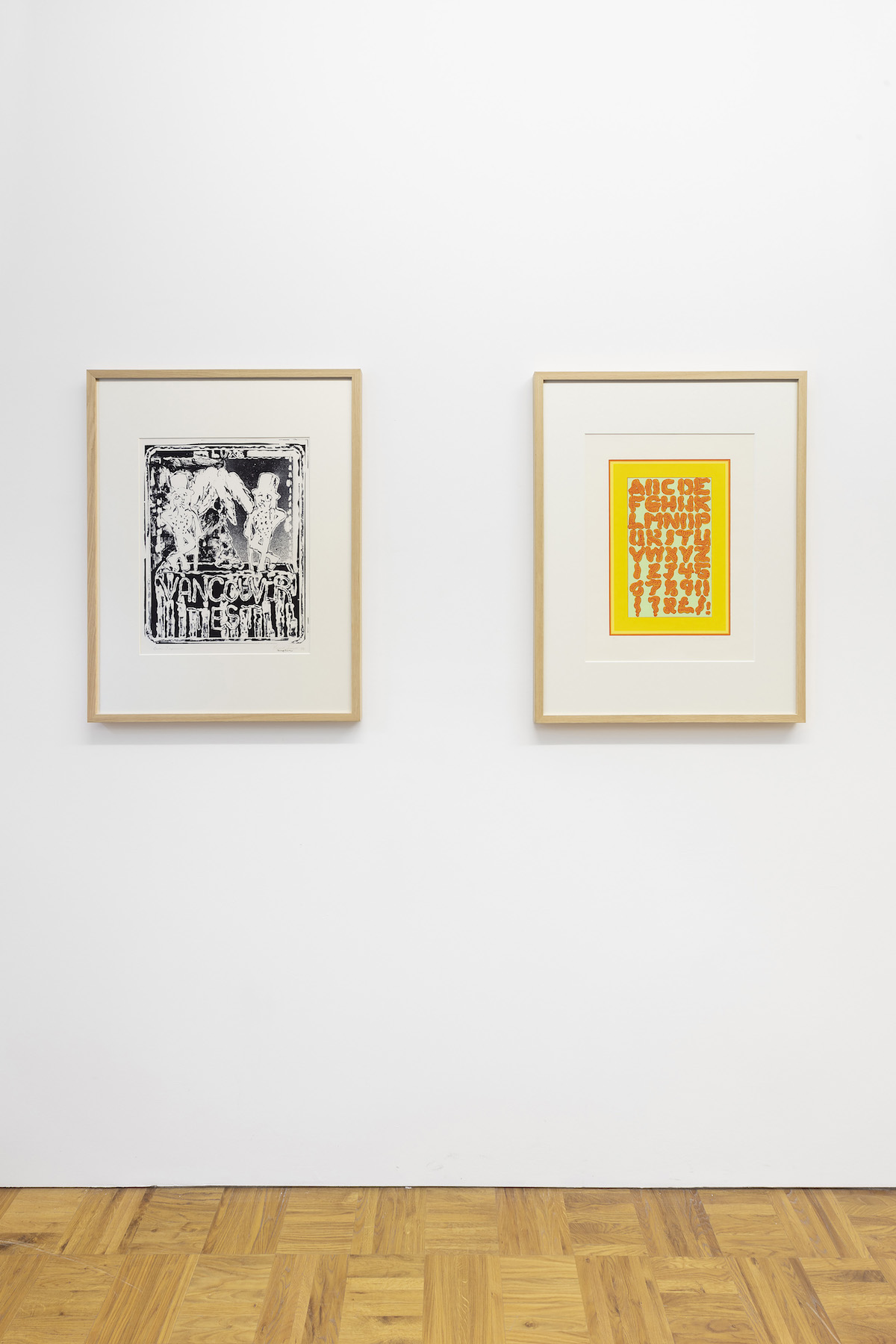 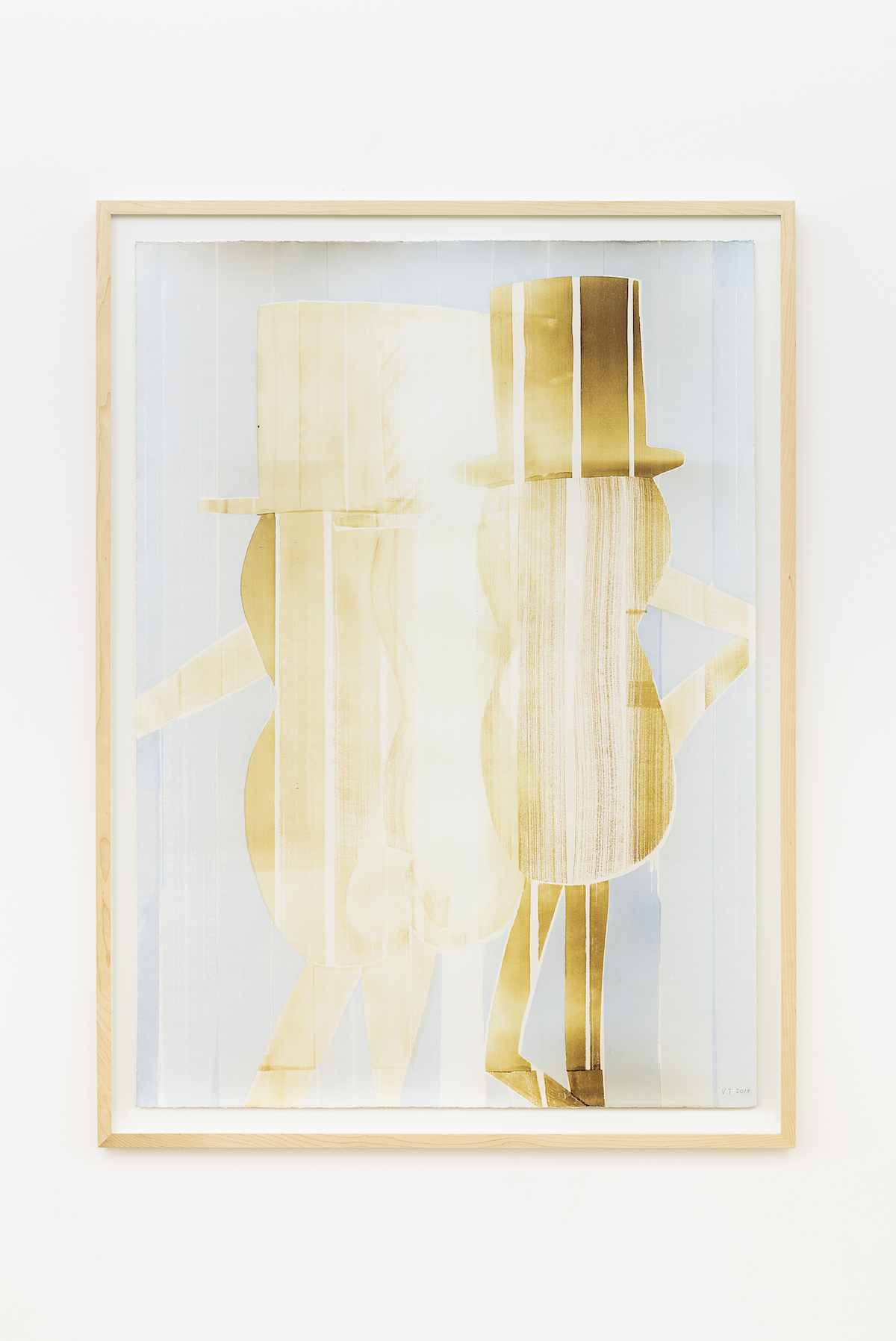 Vincent Trasov started to make drawings of Mr. Peanut in 1970. As Nancy Tousley wrote in her text Mr. Peanut Then and Now (published in “Mr. Peanut Drawings”, New Documents, Los Angeles 2017): “The ever-expanding body of work began as the pages of a palm-size flip book, for which Trasov appropriated Planters’ brand icon and directed him to perform a tap dance. This hand-drawn animation became a 16 mm film that then materialized into a giant papier-mache peanut shell, which Trasov made by hand. He modeled the face on his own and appeared in costume as “Mr. Peanut” in Halifax, New York, Toronto, Los Angeles, Victoria, and Vancouver. In 1972, Mr. Peanut graced the cover of the debut issue of FILE Megazine, published by General Idea. Two years later, in a coup de théatre, again sporting the shell and Mr. Peanut’s anachronistic accoutrements, Trasov – a prominent figure in Vancouver’s Dada-inflected chapter of the International Correspondence Network – declared himself a candidate for mayor.”

In regards to the many drawings that the artist had been constantly producing in the past twenty years, and particularly to the image of the Peanut infiltrating scenes of historical, geographical and artistic contexts, Tousley continues:

“Freed from his job as the logo of the Planters corporation (now a division of Kraft Foods) and his civic obligation of running for public office, Mr. Peanut becomes a mythical globetrotting cipher capable of interrupting any situation—what Claude Levi-Strauss might have called a ‘floating signifier.’ Physically embodying both the ingredient of Planters’ most iconic snack food and the social mobility the company marketed to its consumers, the original Mr. Peanut mascot required a signified (a concept) that was fixed to its signifier (the image). As Planters Peanuts connotation of social mobility weakened over time, meaning drained from the original image, leaving it to float. A floating or empty signifier no longer gives off meaning: it absorbs it, opening it to interpretation and making it ripe for appropriation.”

Playing with persona and identity, Vincent Trasov slipped into the peanut shell and effortlessly assumed the role of Mr. Peanut with elegance and aplomb. It seemed a sensible stance in an era preoccupied with the dematerialization of art. Simultaneously, Trasov worked with Michael Morris to imagine new ways of bypassing the existing gallery structure by working directly with others in a network.

Their close friendship and collaboration lasted more than 50 years (1).  This decades-old Vancouver-Berlin bond and brotherhood remains an important factor in understanding the legacy and the background intrinsic to the complex creative development of the artist and his varied collaborative interconnections.  (2)
Together, Morris and Trasov coined the term “Image Bank” ( founded in 1970 and inspired by Ray Johnson and his New York Correspondence School and Robert Filliou’s Eternal Network). Image Bank is now the Morris/Trasov Archive (3) and was carried out largely by the postal system with a fake bureaucracy employing rubber stamps, stationary, envelopes, postage stamps, annual reports and many compilations of address lists and directories. Mr. Peanut didn’t take to the streets immediately, but it was not long before he began surprising the public by appearing in locations such as Queen Elizabeth Park and assuming the familiar pose beside a piece of sculpture by Henry Moore or by the war memorial at Victory Square (both in Vancouver). These appearances, besides being great photo ops, were intended to create the atmosphere of an “art city”.
Later, on the suggestion of fellow artist John Mitchell, Trasov was persuaded to don the costume as a symbol for the collective aspirations of the art community and run for mayor in the 1974 Vancouver civic election on the art platform: P for Performance, E for Elegance, A for Art, N for Nonsense, U for Uniqueness and T for Talent. The author William S. Burroughs, a guest in Vancouver at the time, made the following endorsement of Trasov’s candidacy:

I would like to take this opportunity to endorse the candidacy of Mr. Peanut for mayor of Vancouver. Mr. Peanut is running on the art platform, and art is the creation of illusion. Since the inexorable logic of reality has created nothing but insolvable problems, it is now time for illusion to take over. And there can only be one illogical candidate-Mr. Peanut.

The campaign was a 20 day performance with John Mitchell as campaign manager and spokesperson, and included the involvement of the then-recently formed artist centers and groups Pumps, Video In, Blonde Warehouse and Western Front Society, which Trasov along with seven other artists co-founded in 1973 as a platform for the production and presentation of new art activity in Vancouver(4). At the final counting of ballots Trasov received 2,685 votes for 3.4% of the vote.

Scott Watson, in his wide and precise historical essay “In the Image Bank” (in “Image Bank”, catalogue published by Morris and Helen Belkin Art Gallery, University of British Columbia, Vancouver and KW Institute for Contemporary Art, Berlin, 2019) brilliantly summarizes the background and intention behind the campaign: “The Mr. Peanut campaign in the fall of 1974 was in a way a culmination of the Art City project of putting art in public civic spaces. And it was the ultimate viral contamination of an existing highly symbolic order by another. Occupying not just a plaza or street corner, the Mr. Peanut campaign inserted itself into the civic electoral process and the mainstream media coverage of that process…But the implications of this extended performance / institutional critique has considerable resonance today when less innocent and more venal clowns, actors and mediated icons run and win elections. Surely the Mr. Peanut mayoralty campaign dared to dream they would win the election, even if they knew that was not at all likely. The castigations by several of the “legitimate” candidates revealed that in their view democracy was really only for those involved in commerce. The platform of the campaign did not compute into the usual plans to deliver more to business and have the buses run on time; different values were proposed for public discourse and as principles of governance — Performance, Elegance, Art, Nonsense, Uniqueness, Talent. Elegance would be my favourite. William S. Burroughs endorsed Nonsense.”

The exhibition is accompanied by a text by Zanna Gilbert, developed as an introduction to Mr. Peanut Summit: Supplement n.5, published by Fillip, Canada
In November 2017, the artists Anna Banana, Michael Morris, and Vincent Trasov convened together at Or Gallery, Vancouver, for the Mr. Peanut Summit, moderated by Zanna Gilbert and hosted by Jeff Khonsary. Their conversation traced the contours of Trasov’s Mr. Peanut project, with the aim of placing the anthropomorphic character’s run for mayor in 1974 within the context of both Vancouver and the international media and mail art scenes.

Vincent Trasov is a painter, video and performance artist. His work is often media based and collaborative in spirit, involved with developing networks. He is a Canadian born in 1947 in Edmonton. In 1970 he founded Image Bank with Michael Morris, a method for personal exchange of information amongst artists; he has made videotapes since 1971; 1973 he was co-founder and co-director of Western Front Society, Vancouver, a centre for the production and presentation of new art activity; 1981 he was invited with Morris as guest of Berliner Künstlerprogramm des DAAD to Berlin; 1991 he and Morris founded the Morris/Trasov Archive, permanently housed at Morris and Helen Belkin Art Gallery, Vancouver, to research contemporary art and communication. Trasov has had numerous international exhibitions and is represented in public and private collections in both Europe and North America. He presently resides and works in Germany and Canada.

_____
Thanks to Morris and Helen Belkin Art Gallery, Morris/Trasov Archive and Silvia Krankemann.

3: See the exhibition “how sad I am today”from exhibition at Belkin Art Gallery:
And About the Image Bank – since 1990 the Morris/Trasov Archive

4: The Western Front is an artist-run centre located in Vancouver, British Columbia, Canada. It was founded in 1973 by eight artists who wanted to create a space for the exploration and creation of new art forms

Digital Collection from 50 years of Mr. Peanut This digital collection of different project by Vincent Trasov gives insight access to some of the most important project that the artist and his close collaborators have been involved with in the course of their rich career.

PDF Digital Version of The Rise and Fall of the Peanut Party, artist book by John Mitchell and Vincent Trasov, 1974