Castello di Rivoli Museo d’Arte Contemporanea, in collaboration with the City of Rivoli, unveils a new project by Patrizio Di Massimo (Jesi, 1983) which is part of the new program of site-specific commissions for the public space of the Risalita Meccanizzata, an automated escalator system originally designed to connect the historical city center to the piazzale by the Castello. Specific areas of the pathway, closed since 2011, have been reinstated and opened to the public to view the project and become an unprecedented exhibition space which can host new contemporary artworks, specifically commissioned by Castello di Rivoli. The first project is curated by Stella Bottai.

Conceived specially for the spaces of the Risalita Meccanizzata in Rivoli and its four station, Il ciclo de La Risalita (The Escalator Cycle) (2020) was realized using the precious and labour-intensive oil on canvas tecnique, inspired by the historical tradition of large painting cycles. Developed over four monumental polyptychs, for a total of 17 canvases, the work was realized by thr artist in collaboration with Sara Bertin, Carola Blanco, Francesco Rocco Caputo, Francesco Isgrò, Khatereh Safajoo, Matilde Martinez, Giulia Polla, Sara Pirozza, Teresa Verrascina, students on the Scenography course of the Albertina Academy of Fine Arts in Turin, through a series of workshops hosted by Combo in Turin. Alike an ancient artist workshop, Di Massimo involved the students in all stages of production, teaching them his painting method from the photography of the characters and composition of the sketches to the actual execution.

In recent years, Di Massimo’s figurative practice has focused on the relationship between painting technique and subjects. In particular, the artist reflects upon the idea of the portrait as a vehicle for the expression as well as representation of certain moods, making reference to important historical and twentieth-century painters – such as Giorgio de Chirico, Otto Dix and the German movement of the New Objectivity. Sometimes focused on one character alone, more often depitcting the interaction between subjects, many of Di Massimo’s paintings depict characters at the height of an emotional transformation morphing them into extreme expressions of themselves, articulating paradoxical relationships between individual and collective identities. Until now, Di Massimo has only portrayed a close circle of family and friends.

On the occasion of Il ciclo de La Risalita, the artist has for the first time involved strangers, well-known or anonymous, motivated by the desire to offer a choral representation of the local community through his work. Among the subjects portrayed are: Alberto Barbera, Director of the Venice International Film Festival; Michele Coppola, Executive Director Art, Culture and Historical Heritage Intesa Sanpaolo; Fulvio Ferrari, founder of the Museo Casa Mollino; Christian Greco, Director of the Egyptian Museum Turin; Paola Gribaudo, President of the Albertina Academy of Fine Arts; Massimo Lapucci, General Secretary of the Fondazione CRT; Francesco Profumo, President of the Fondazione Compagnia di San Paolo; Gigi Raiola, Luxemburg bookshop; Patrizia Sandretto Re Rebaudengo, contemporary art collector and President of the homonymous Foundation; Cally Spooner, artist; Giulia Valentina, content creator and influencer. Finally, some members of the Castello staff also appear, including Carolyn Christov-Bakargiev and Marcella Beccaria, respectively Director and Chief Curator; Stella Bottai, external curator of the project; and the students themselves who participated in the making of the work. As in the ancient painting tradition, the artist has included his self-portrait.

Il ciclo de La Risalita offers an ironic glimpse of today’s society, dramatically portraying the feelings associated with the exhibitionism, mystery, anger and narcissism of the contemporary world. In this work, the artist combines distinctive leitmotifs of his work – such as the inclusion of monstrous creatures and the use of soft drapes as background, which recall closed theatre curtains and at the same time evoke monochrome backdrops of ancient painting – with historical references, such as the Pazzi conspiracy leading to the killing of Giuliano de’ Medici in the 15th Century, as well as contemporary events. A panel of over fifteen meters stands out, honoring the essential workers who have kept society going during the recent lockdown caused by the COVID-19 emergency, symbolically depicting them as intrepid circus acrobats with multiple skills. Elsewhere, a group of ghosts trigger panic in the room, evoking the feeling of fear which marks the historical moment we are going through.

From the press release of Castello di Rivoli. 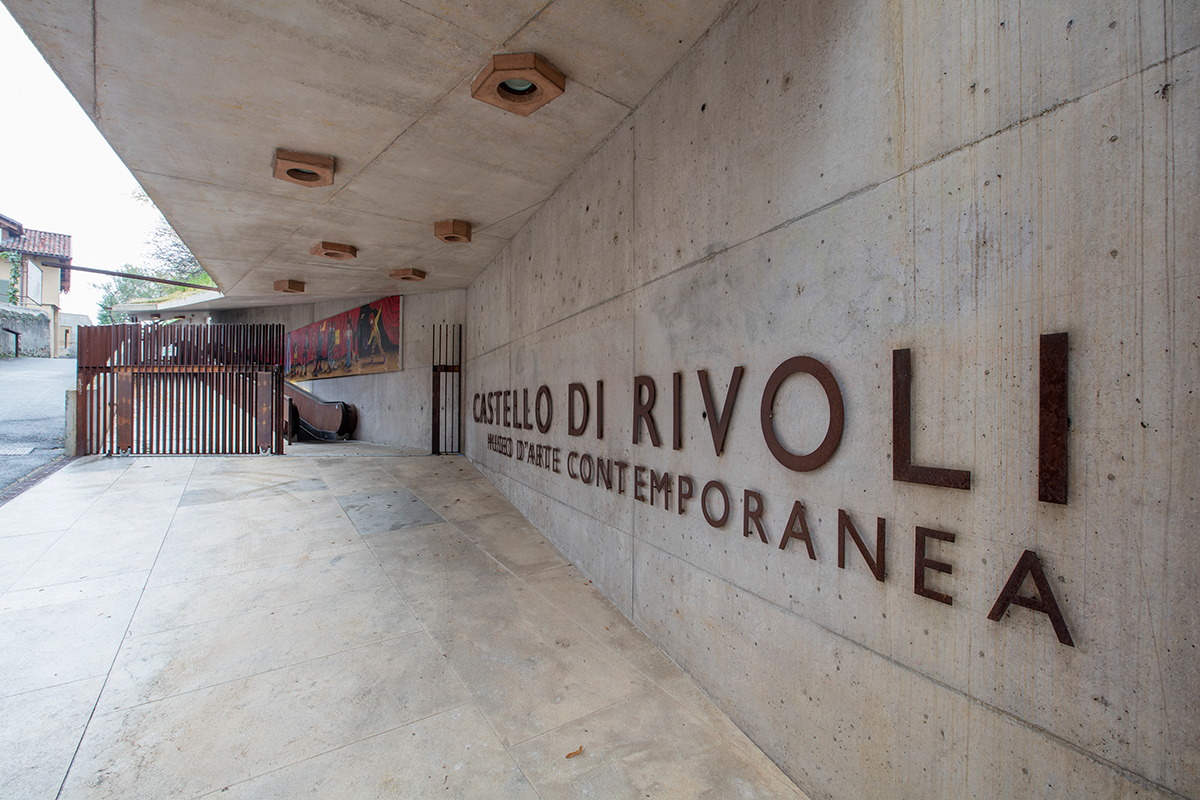 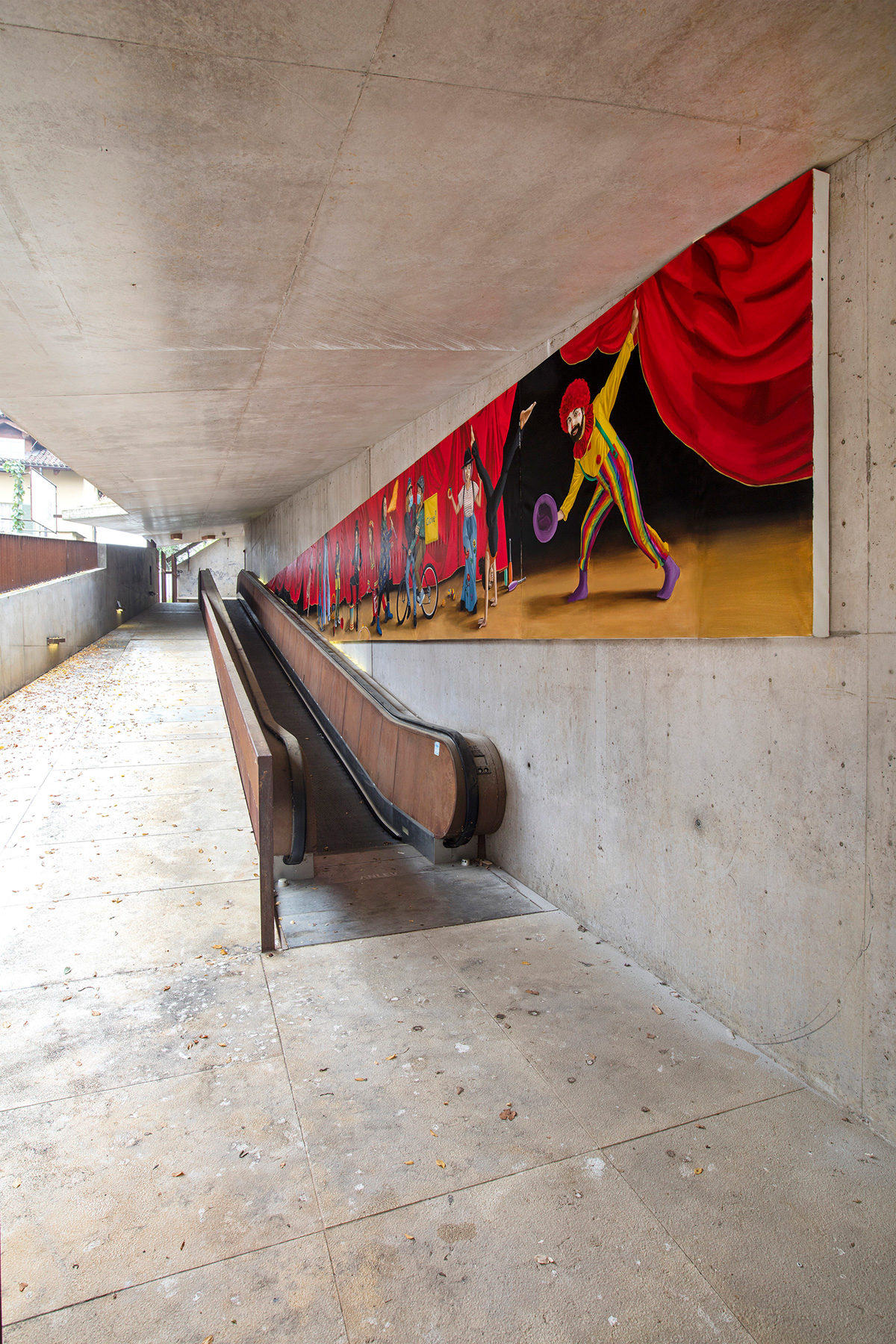 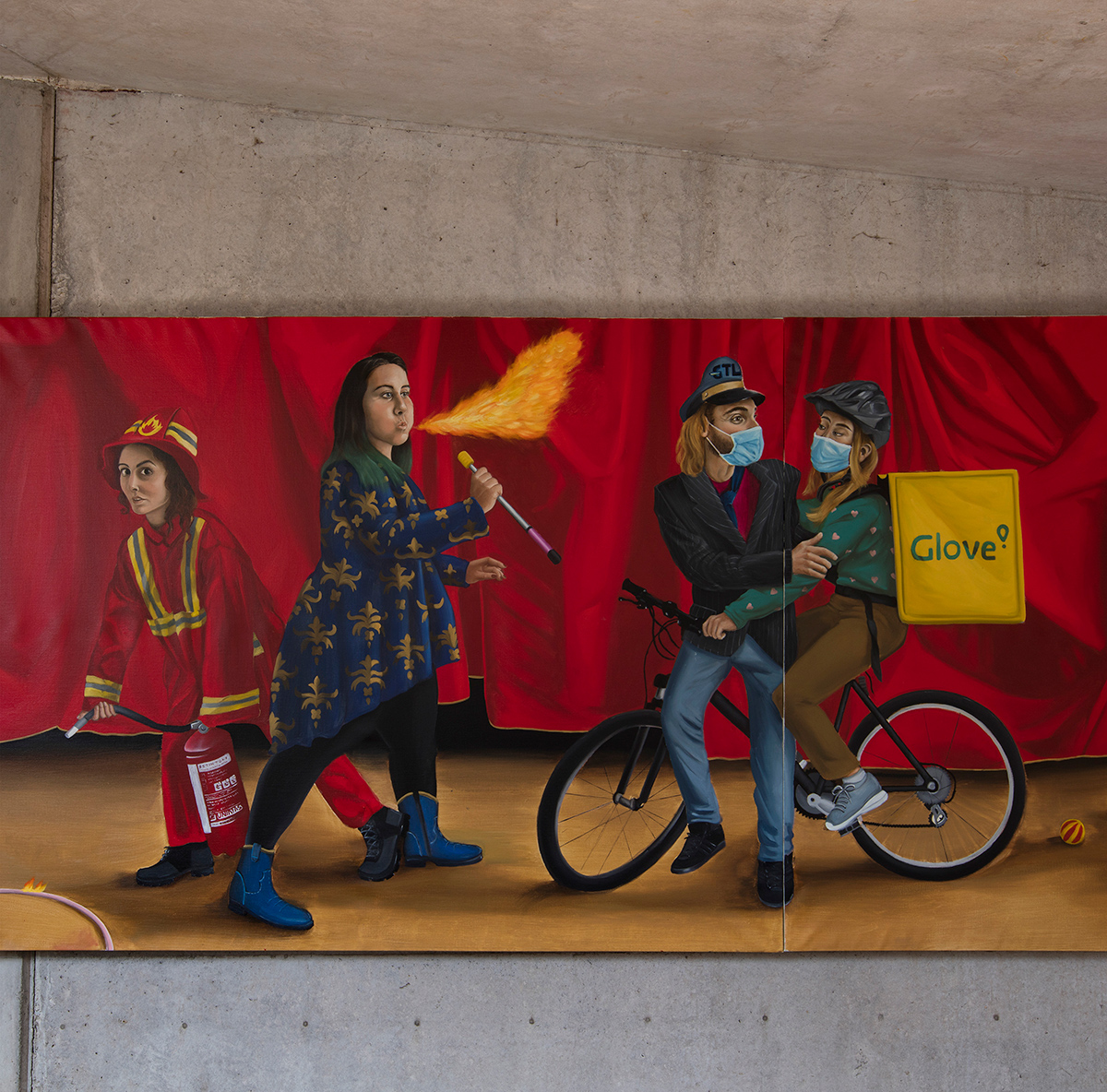 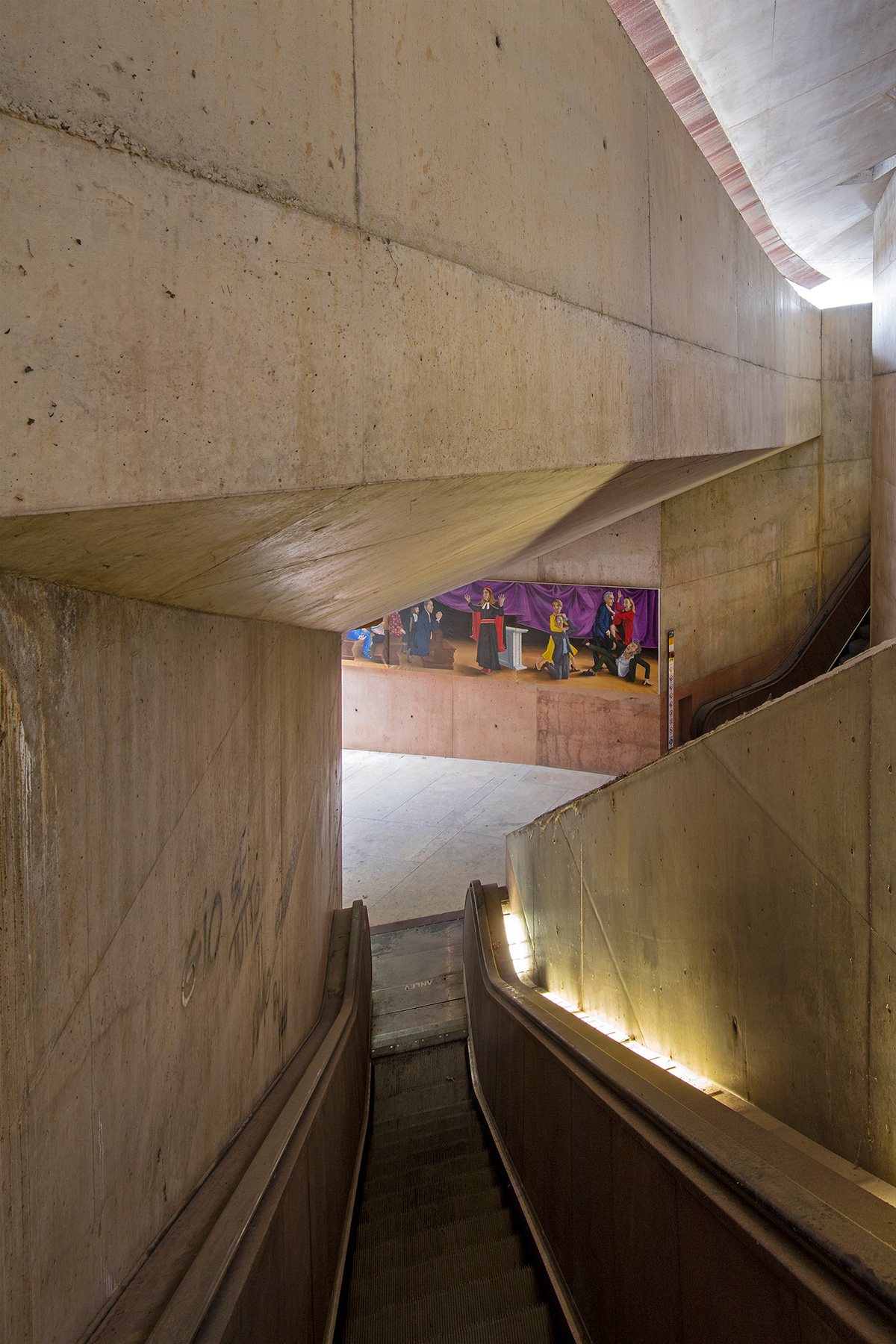 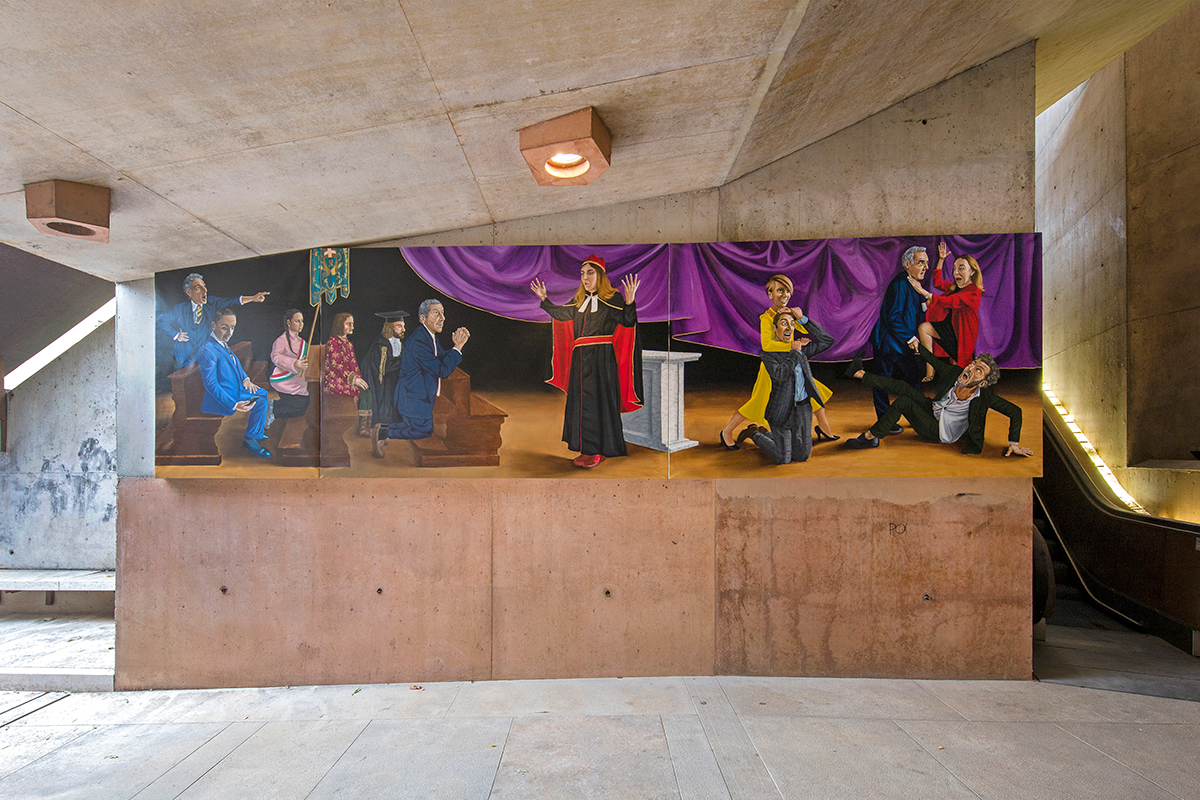 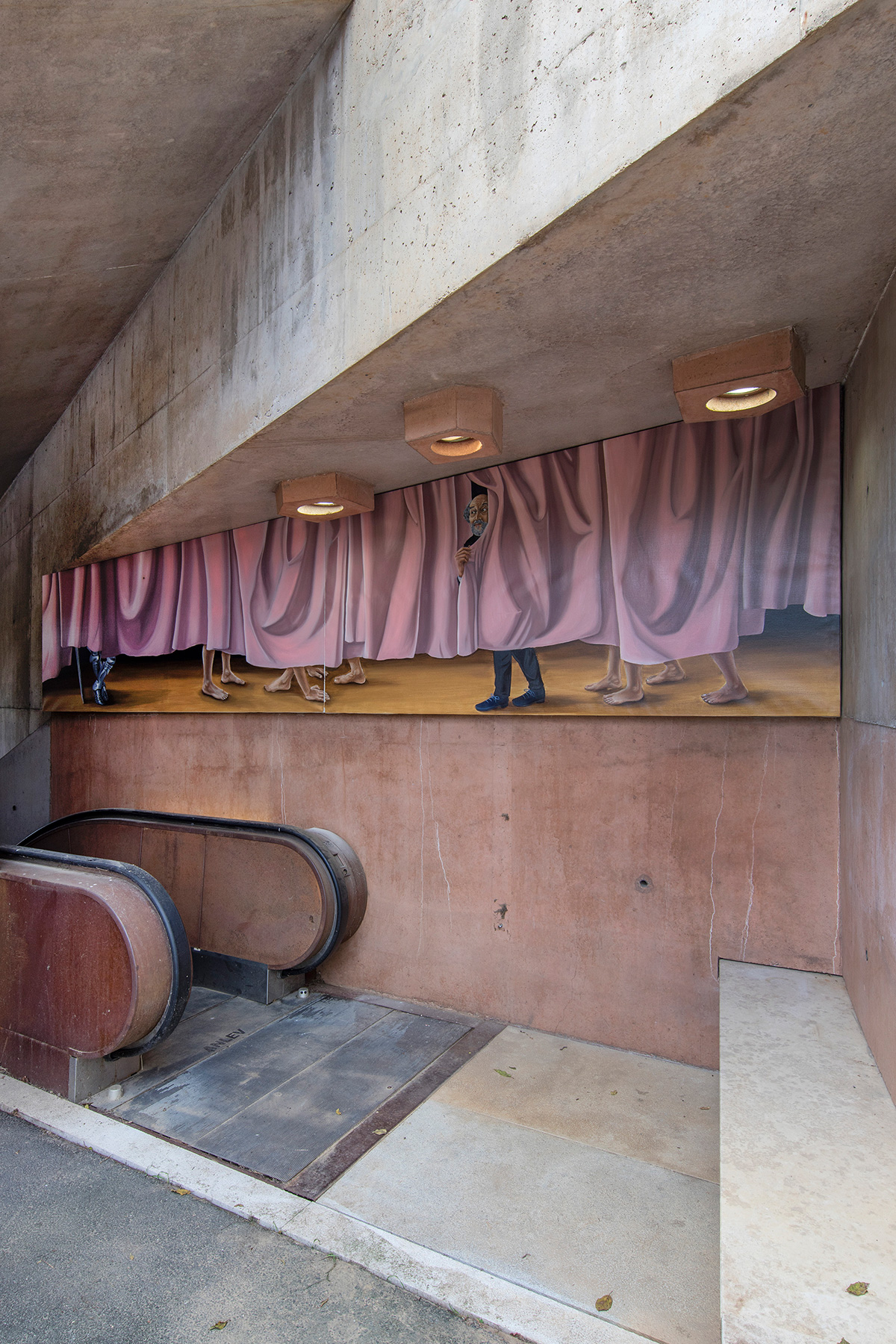 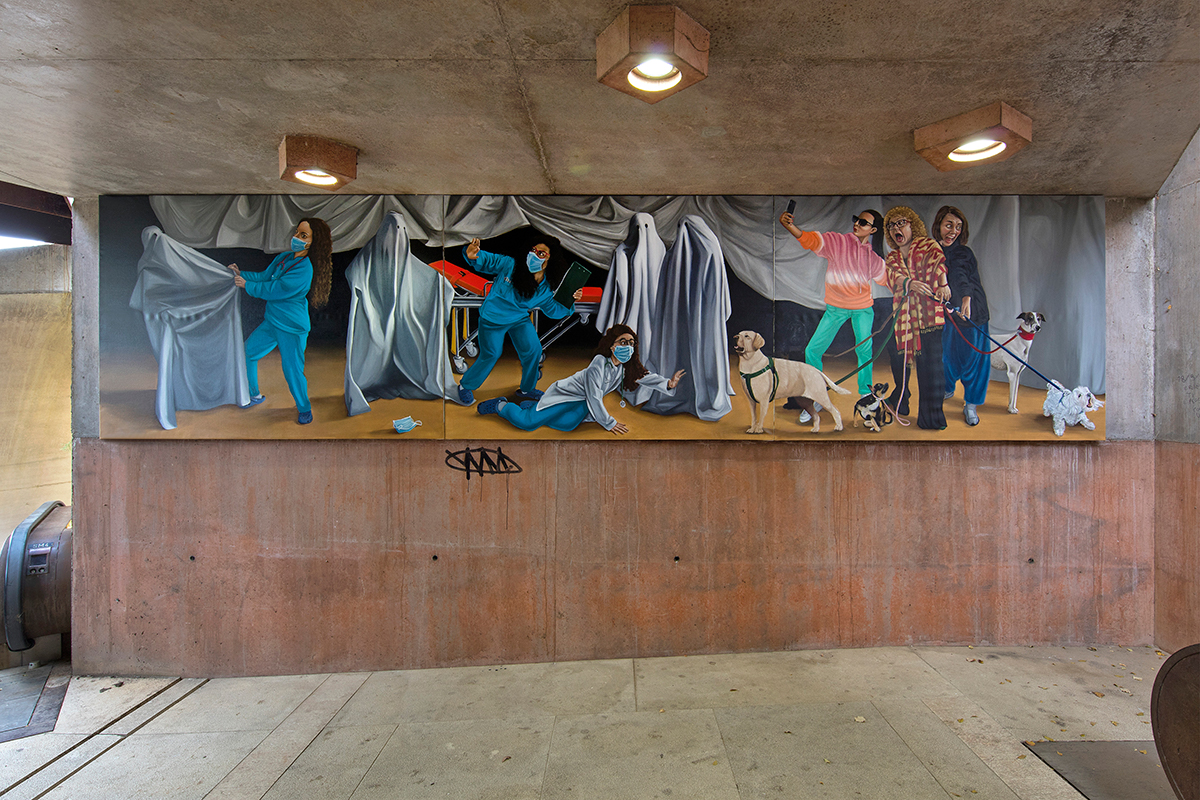