If the dream of flying has accompanied man since Icarus, it is really with the idea of an inflatable sheath, taking the place of the deployment of wings, that it became effective starting from the 18th century. The history of inflatables, parallel with that of aeronautics, is that of the development of a more organic relationship to the aerial. The sheath is a metaphor for the skin, a protection for the body, enabling an immediate proximity with the air. The inflatable carries within itself the idea of the pneuma of breathing; an immediate relationship to the living, to the event, to life.

The exhibition reveals this human dimension of the «pneumatic», from the first industrial and military exploitations (airships, weather balloons, floating assemblies, inflatable decoys…) to the experiences developed by numerous artists designers and architects.

In the middle of the 20th century the appearance of new materials (rubber and derivatives, plastics, woven fishnet…) multiplied the possible uses and practical applications of inflatable structures.

In keeping with the “achieved utopia” by Richard Buckminster Fuller, numerous architects gave inflatables an architectonic credibility, such as Victor Lundy, Walter Bird, Frei Otto, Gernot Minke, Cedric Price and Arthur Quarmby. In May 1967, a symposium on the subject created a stir in Stuttgart and would constitute the reference for the collectives in search of mobile and modular architecture like Archigram, Ant Farm, Eventstructure Research Group, thus for artist the world over such as Graham Stevens or Panamarenko, architects (Jean Aubert, Jean-Paul Jungmann, Antoine Stinco, Hans Walter Muller, Johanne et Gernot Nalbach or Günther Domenig and Eilfried Huth). But it was through a a few mythical exhibitions that the inflatable would find an international echo and a public image, notably the exhibition at the Musée d’art moderne of the City of Paris in 1968, and the pavilions of the Universal Exhibition in Osaka in 1970 (of which those of Yutaka Murata) and finally Documenta V in 1972 in Kassel where artists and architects such as Christo, Hans Hollein, Haus-Rucker-Co, Coop Himmelb(l)au take over public spaces with their works.

Henceforth, the inflatable, takes the form of furniture, dwellings, structures. The plastic polymers became more common and opened an extraordinary blossoming of creations, of forms and of colours. Furniture by Bernard Quentin, A.J.S. Aérolande, Quasar, De Pas, Urbino and Lomazzi, would accompany the pop art imagery and that of a “lucidity” of decorations and uses.

The ecological debate would soon take hold of the subject, for if at that time we were not yet wary of plastic and of other derivatives of petrol, inflatable architecture on the contrary appeared to be an “architecture of the air “, removing itself from the definitive and irreversible entry into time and space, escaping foundations and heavy materials. In England for example, the artist Graham Stevens worked on giving an ecological dimension to the use of pneumatic structures.

It also acquired a critical and political function. The ephemeral nature of the inflatable does indeed give it an intemporal dimension, that of the event, of the action, of participation. It is the instrument of an intervention, which did not escape artists such as those of the Gruppo N, or Piero Manzoni, Yves Klein, Hans Haacke, Otto Piene, Marinus Boezem, Lars Englund, Andy Warhol… and the architects who would make it the instrument of an alternative criticism like UFO, Utopia or the creators of the Viennese radical scene. Harbingers of the contestation which rumbled amongst the young generation, the inflatables act as a prism for viewing the world which surrounds us in another way (like the Urboeffimeri of UFO) and in order to live together differently (Instant City, Ibiza, 1971). The inflatable is thus used by the group A.J.S. Aérolande, made up of Jean Aubert, Jean-Paul Jungmannand Antoine Stinco, to call into question the competition the prix de Rome just before May ‘68 and to propose a new way of building, modular, festive and endlessly transformable.

After the petrol crisis at the end of the 1970’s which would sound the death knell of an ideology of the use of plastics, the inflatable progressively faded away, the post-modern current jeopardising the image of this industrial product. But since about ten years, with the appearance of more ecological new technologies, the inflatable has regained its reputation and represents an alternative for a number of architects (Diller Scofidio + Renfro, Nicholas Grimshaw, Arata Isozaki, Herzog & de Meuron, Snøhetta…). The inflatable enables the reinvention of spatial possibilities, introducing different perceptive and cognitive experiences. The recent appearance of organic textiles allows us to foresee the development of research where the inflatable could offer new architectural and design options and introduce new constructive principles, which the experiences of Achim Menges, amid.cero9, Kengo Kuma, Mad Architects Zero, Selgascano demonstrate… 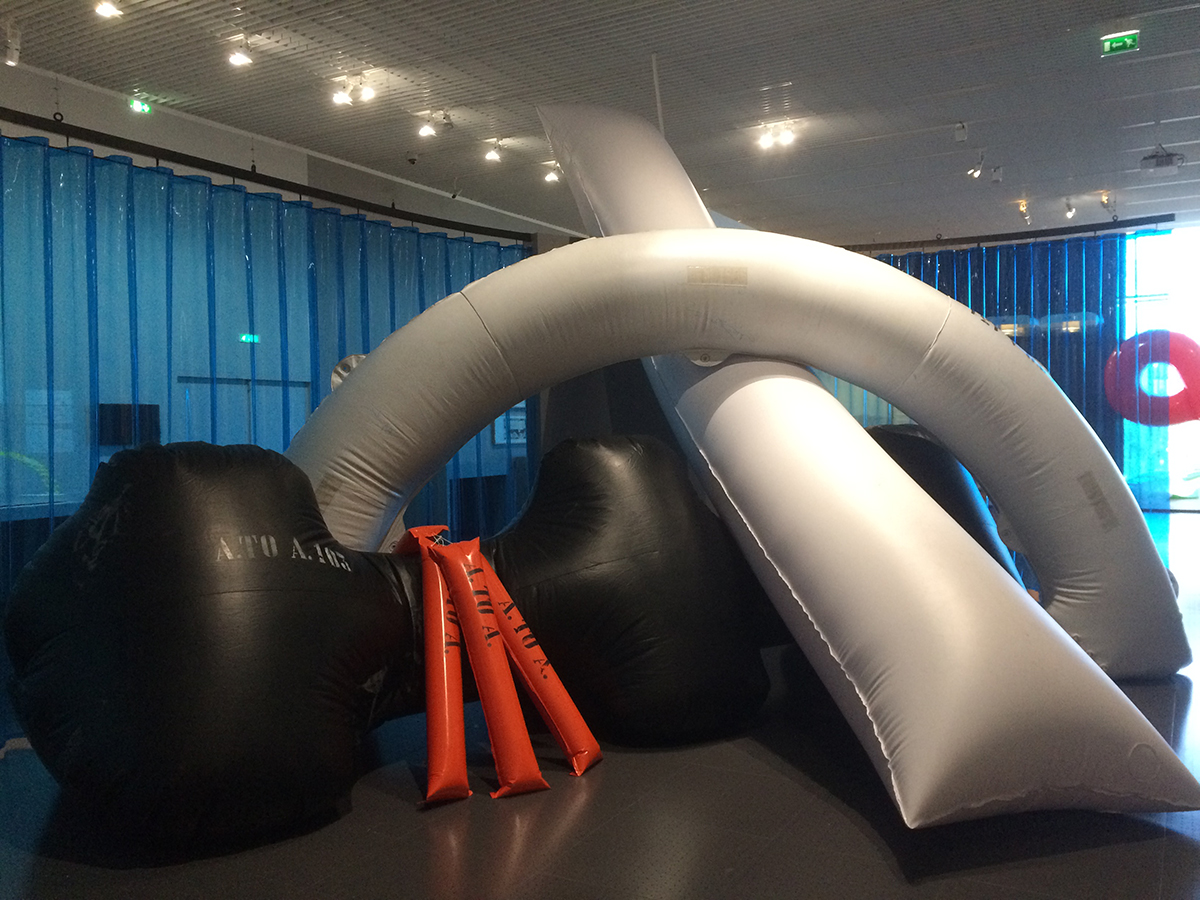 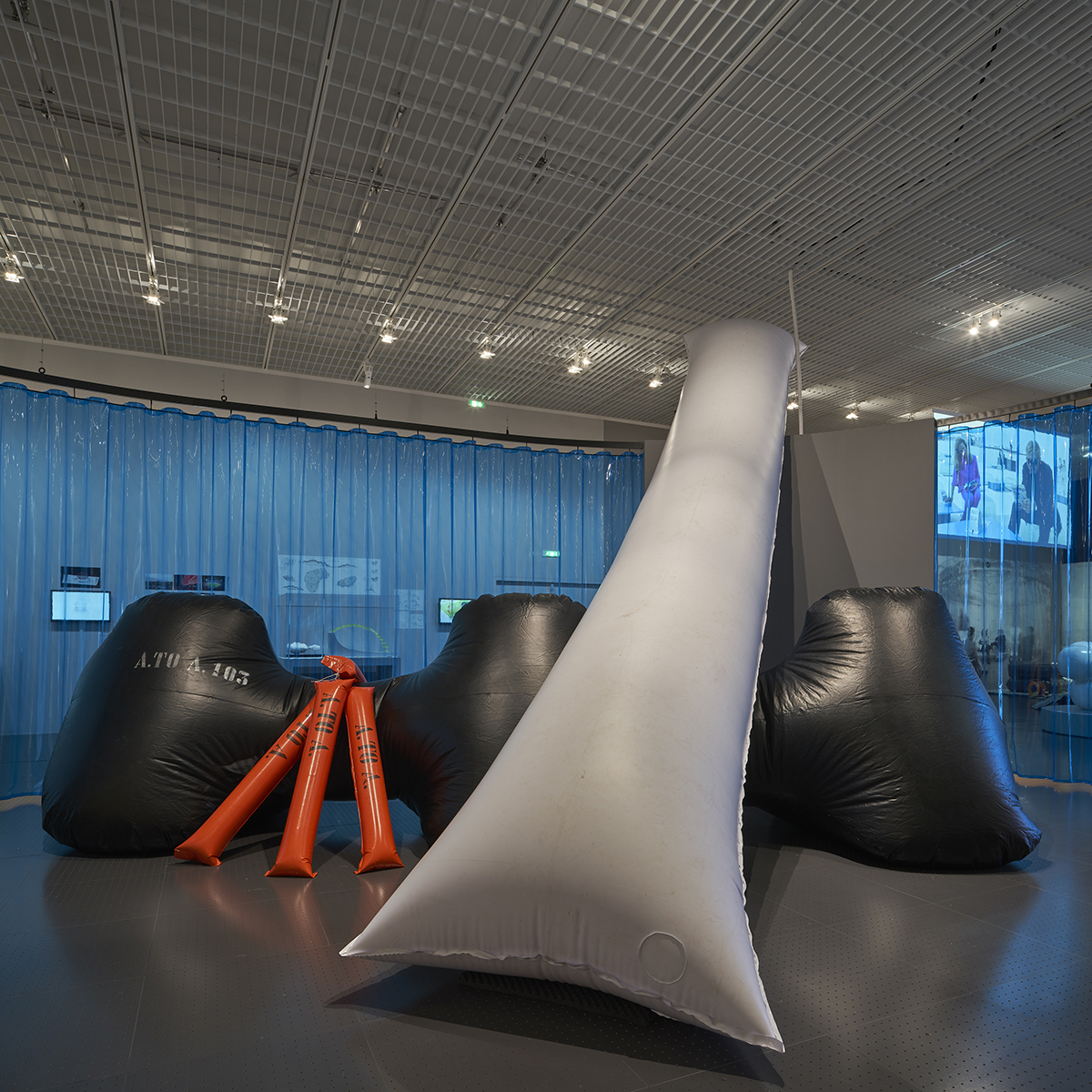 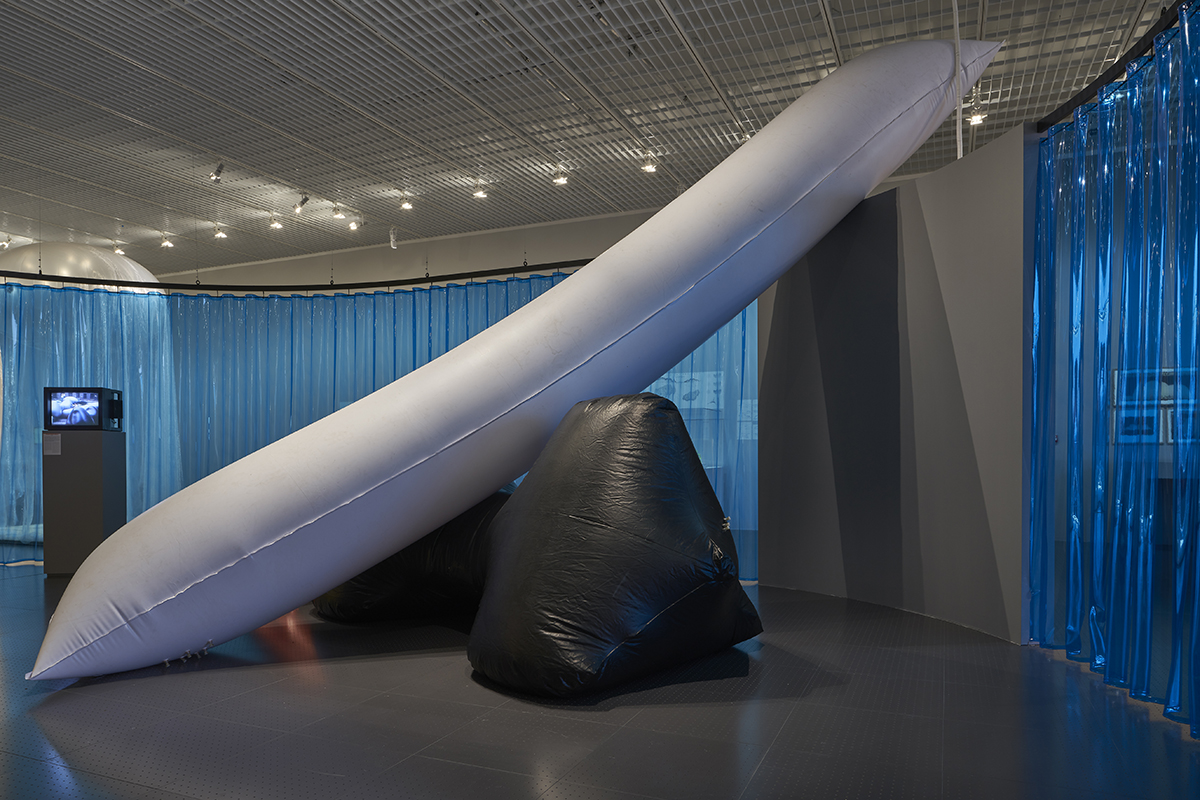