Klosterfelde Edition presents Continuouslessness by Kasia Fudakowski. Together with the artist, a travel edition was created comprising of miniature versions of all 43 panels made by the artist so far.

Flow! flow onward
It all began in 2011, with three delicately made panels that radiate an exuberant joy in ornamentation. Kasia Fudakowski (*1985, London) found the inspiration for these works in Poland, the country of her grandparents. Traditionally people have gathered scraps left behind by the metal industry and according to their own creative designs, used them to build gates to their properties. The uniqueness of each gate follows the principle of bricolage, as they are made by tinkering together found pieces of industrial waste. For how much longer must we improvise? is the title of Fudakowski’s first three panel works; a question that echoes a degree of frustration at being forced to improvise. “Yet within that limitation”, the artist says, “a great deal of creativity becomes visible.”

Ever streaming fully downward
The ongoing series Continuouslessness, (revealing itself as a series in 2017) grew from the endless possibilities within this set of limitations. Six years after the first three panels, the focus shifted from the ornamental shapes in the centre to the initially less important edge; the support that holds everything together. The frame opens an infinite field, even as it simultaneously limits space and possibilities. A productive paradox? The monk Walahfrid Strabo, already in his 9th century didactic poem “On Horticulture”, gave the following advice: “so that the sown earth is not washed away, […] frame it in a rectangle with boards.”

So far, Fudakowski has sowed a wide variety of observations into her mostly rollable metal frames. Some panels are dedicated to gender issues and the role of women, such as a series on famous saints like the “hairy” Mary Magdalene, who started out as a prostitute and whose femininity, out of love for Jesus, wilted away in hermit-like seclusion. Art-historical gender references can also be found, such as a response to Duchamp’s surrealist-dadaist representation of women in “The bride stripped bare,” 2017, in which Fudakowski depicts the “chosen one” on the most beautiful day of her life as a “nervous, stomach-churning, cigarette-smoking bride, kneeling and bent over […] as she awaits her fate.” The bridal bouquet is comprised of Sansevierias or “mother-in-law’s tongues”, an evergreen plant, well suited for shady households.

How the water spills | How the water basins | Brimming full he fills!
In “Waiting Room (Ausländerbehörde /Immigration office),” 2019, the artist relates her own experiences of dealing with Berlin’s bureaucratic institutions. Three shell-like chairs mark a human absence. She was struck by the sight of imprints left on the wall by waiting heads: “The suffering caused by waiting in uncertainty […] creates an ellipse on the wall.”

Lastly, Fudakowski dedicated several panels to the pandemic. The starting point being the plexiglas partitions which were suddenly installed everywhere, to allow eye contact without breath. “Safe Sex – split screen time: Left & Right”, “Long after she had left the room” or “Virtually tickle”: the titles alone seem like a flashback to recent hardship, perhaps imminent again.

I will seize you, | I will hold you
For the occasion of the exhibition of several panel works at Klosterfelde, Fudakowski suggested that an edition be made from the growing series. This was as consistent as it was challenging: all 43 panels to date were printed in translucent on plexiglass and meticulously hand glued. The artist’s special affinity for language and literature is no less evident from the “travel edition” of Continuouslessness: each miniature plexiglass panel is accompanied by a card, designed by Bernd Grether that features information about the work and a short text, sometimes explanatory, sometimes associative. Personal observation, humour, warm irony, associative “wild thinking” with a conceptual framework – all this is part of Fudakowski’s creative vocabulary, visual artist as well as author.

Each miniature is flanked by two metal edges and magnets, which allows it to connect to every other panel; the idea of joining the separate works, inherent to the original Continuouslessness piece. Each original panel frame has a set of hooks on one side and rings on the other, enabling it to be linked with another. Only when the panels connect do they gain stability and form a spatial kind of music, full of con- and dissonance, that transcends the individual work. In addition to this aspect of linking separate units, collectors of the special edition are also reminded of the open-ended nature of the series: even if one were to acquire all 43 miniature panels, five slots in the box remain empty, reserved for future works to be added one day: “The work is a lifelong project and will remain unfinished until the death of the artist,” according to Fudakowski.

Spirits that I’ve cited
Whether Fudakowski’s statement alludes not only to her own death, but also to Roland Barthes’ famous essay “The Death of the Author” remains unknown. But much like her edition, this iconic text first appeared in a box, no other than Aspen Magazine’s legendary Minimal Box (1967) – Marcel Duchamp, inventor of the “Museum in a Box” with his own miniature works, was also included. In his much-discussed essay, Barthes argues that writing is not the realm of ancient magic or divine Logos, but a space of con- and dissonance. He writes: “A text is composed of multiple writings that come from different cultures and enter a dialogue with each other, parody each other, question each other.”

When he wills, your master only | Calls you, then ’tis time to hear it.
The time of the old masters and their ancient spells is long obsolete. Language is a communal space, it belongs to no one and to everyone. Continuouslessness is an archive of the past, and at the same time a tool for all tinkerers, improvisers and performers of the present. Letters, syllables, words locking into each other, connecting to that-which-has-never-been-said-that-way-before, becoming specific in time, space and voice. “For how much longer must we improvise?” ask the first three panels. Unconnected yet connected, the words shimmer within the framework of grammar, capable of the magic touch.

Text by Tarika Johar and Michael Stockhausen
Translation by Teun Verheij
Translation of “The Sorcerer’s Apprentice” by Edwin Zeydel, 1955 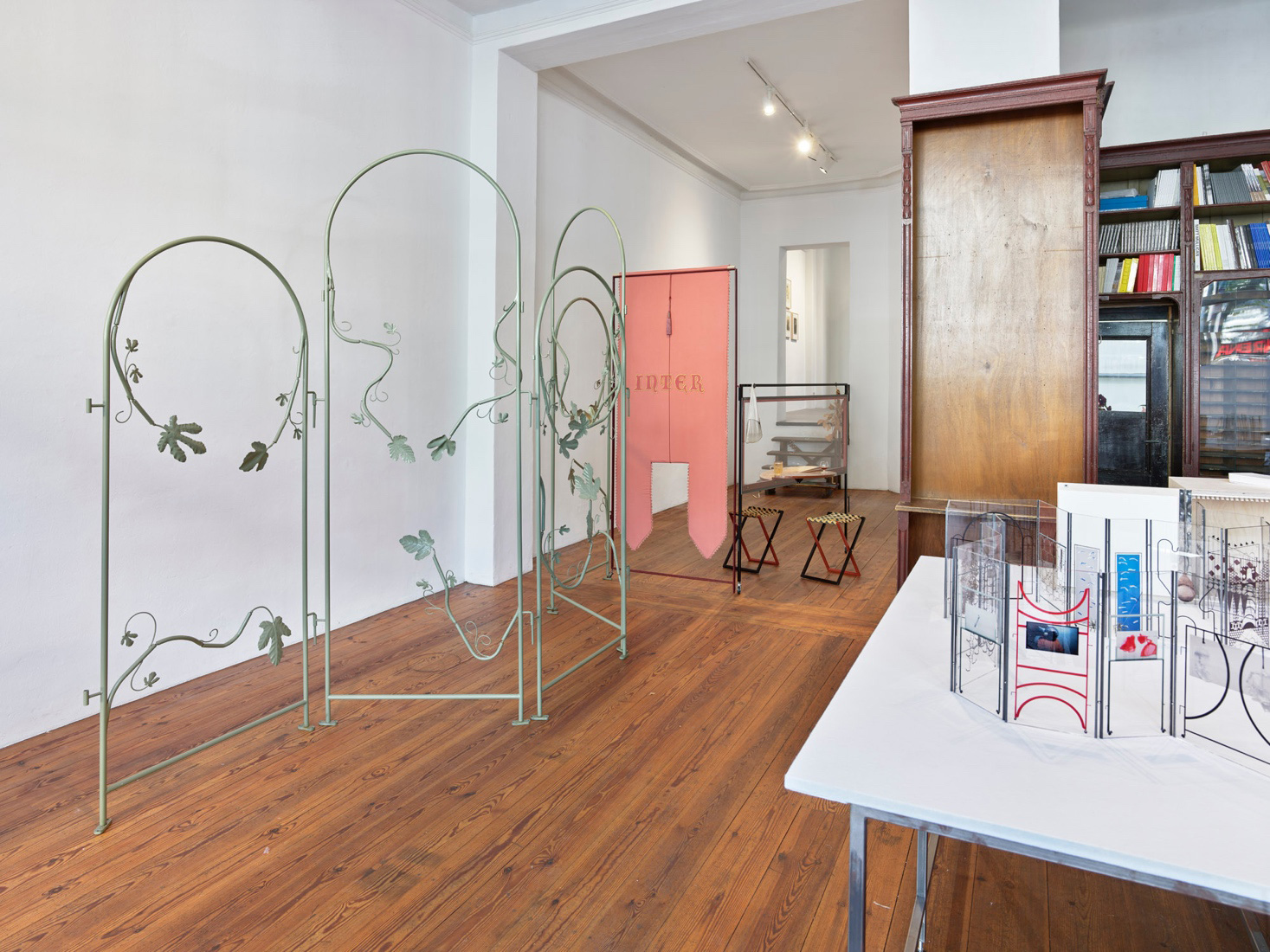 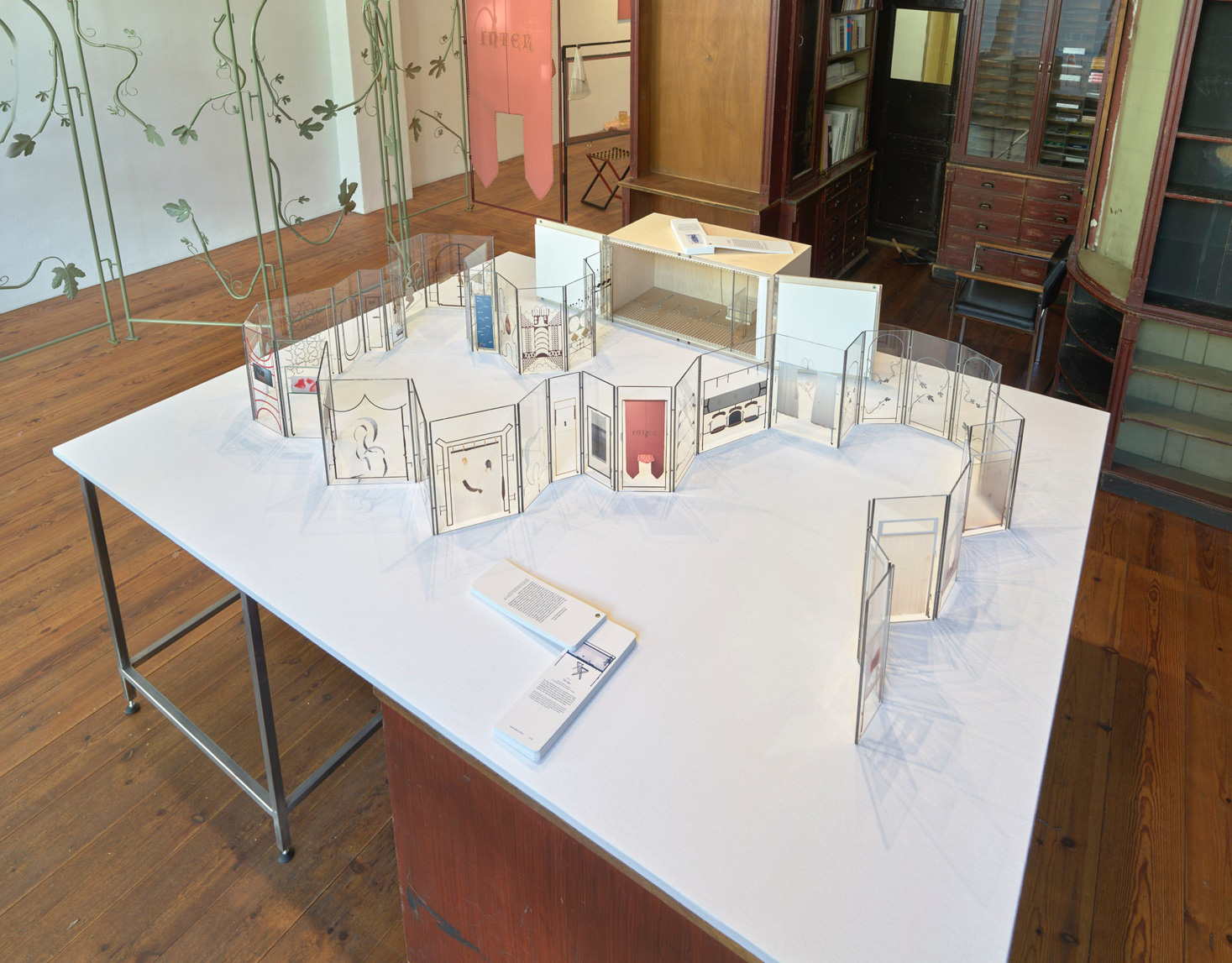 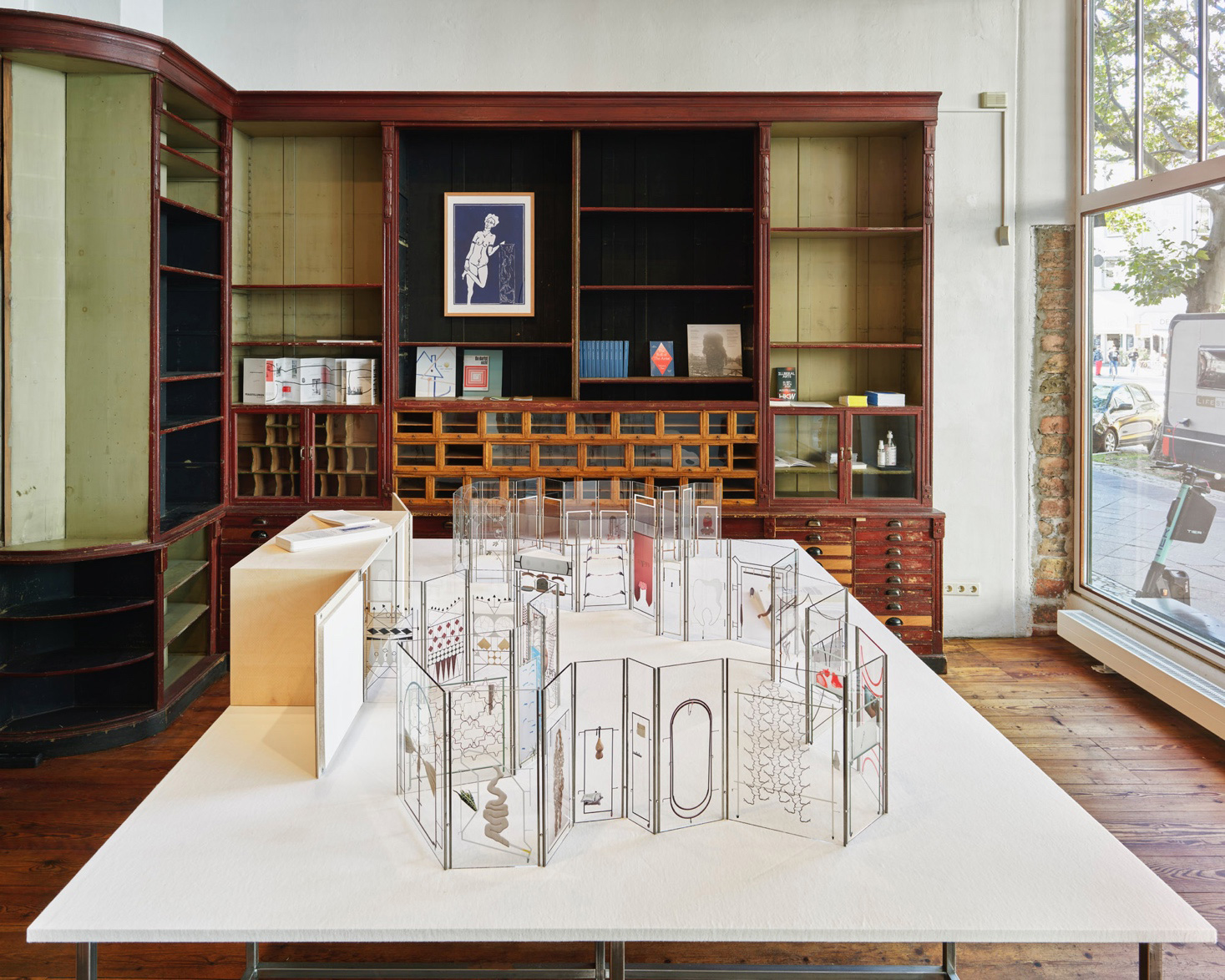 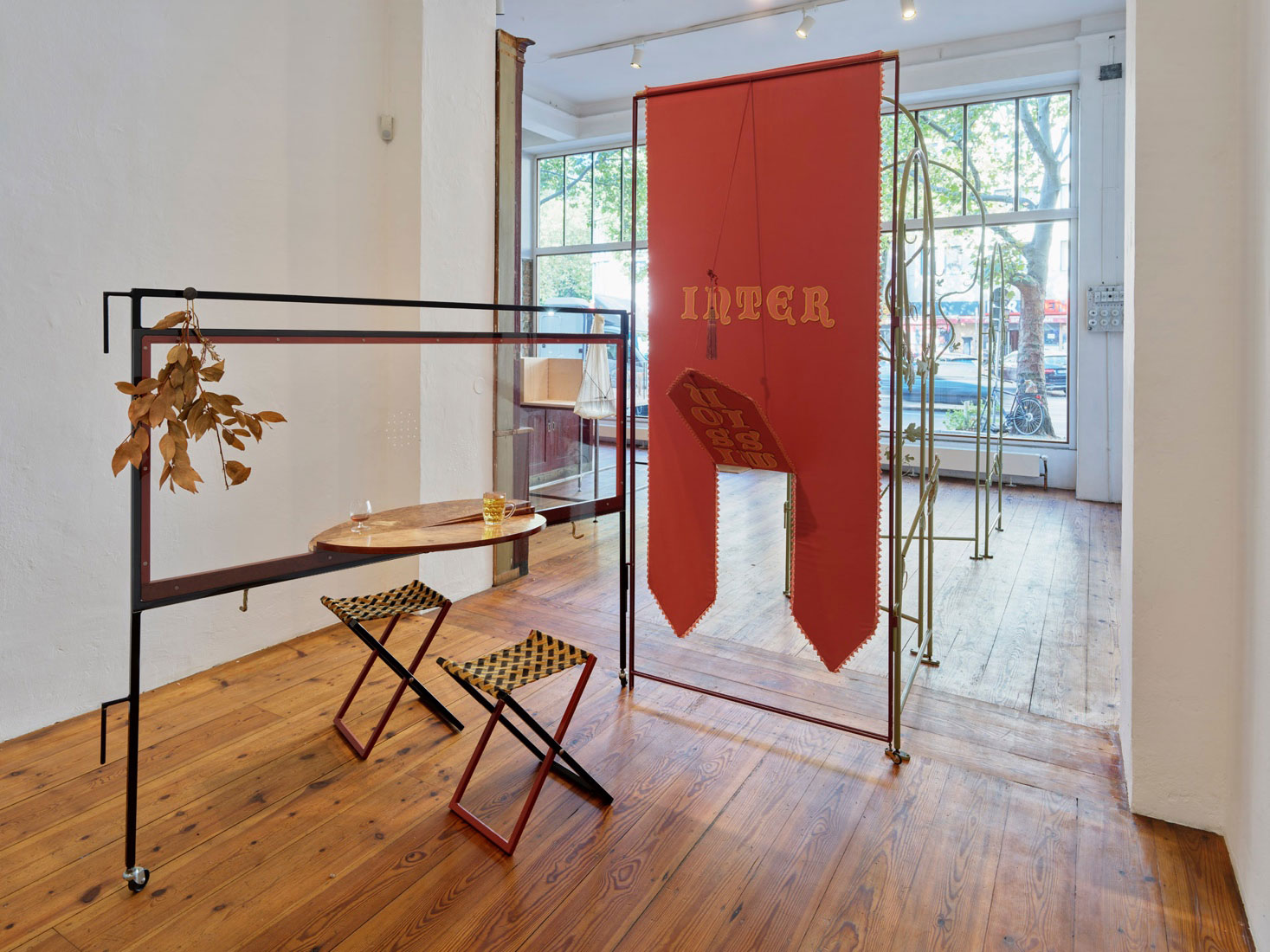 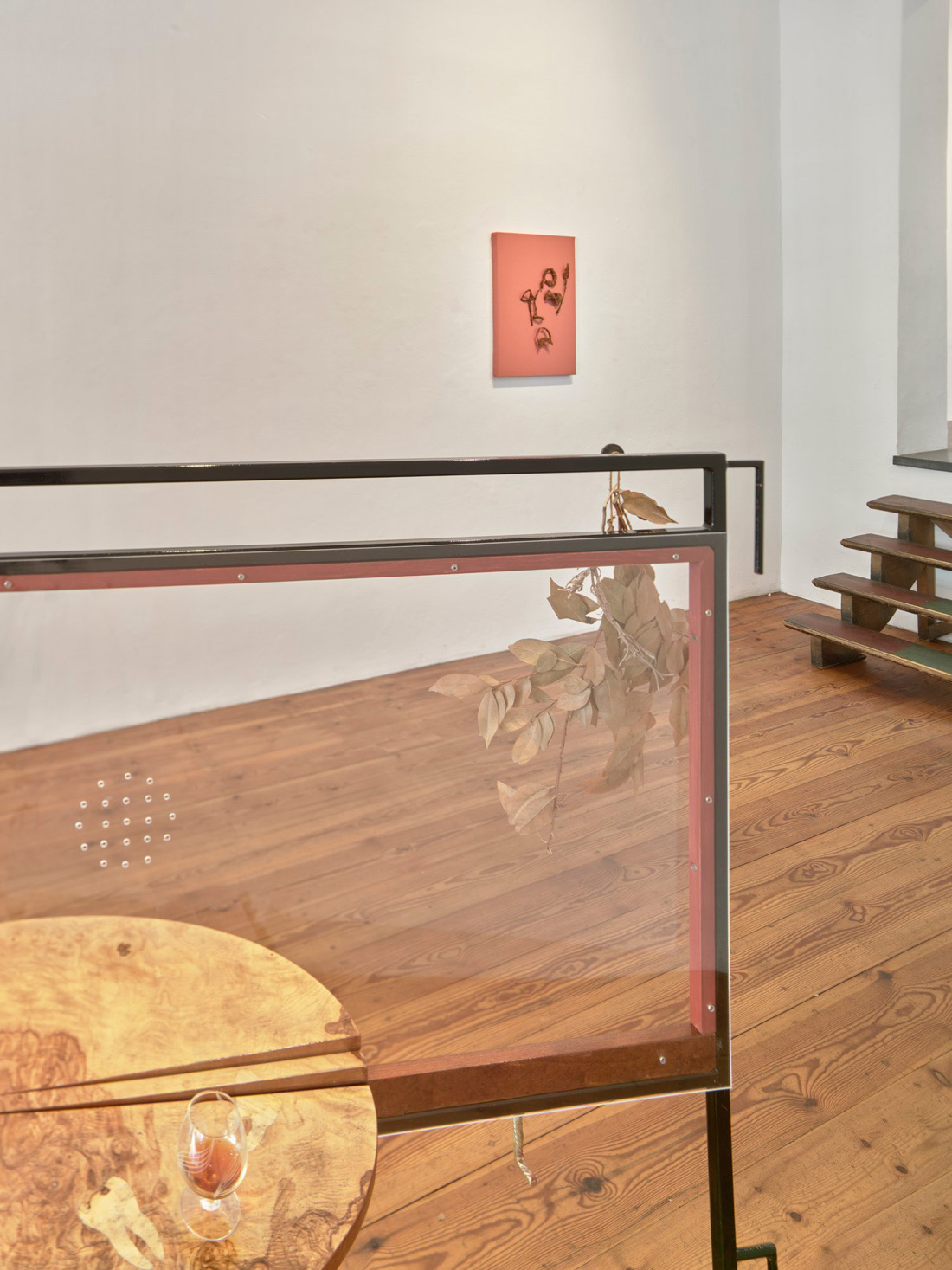 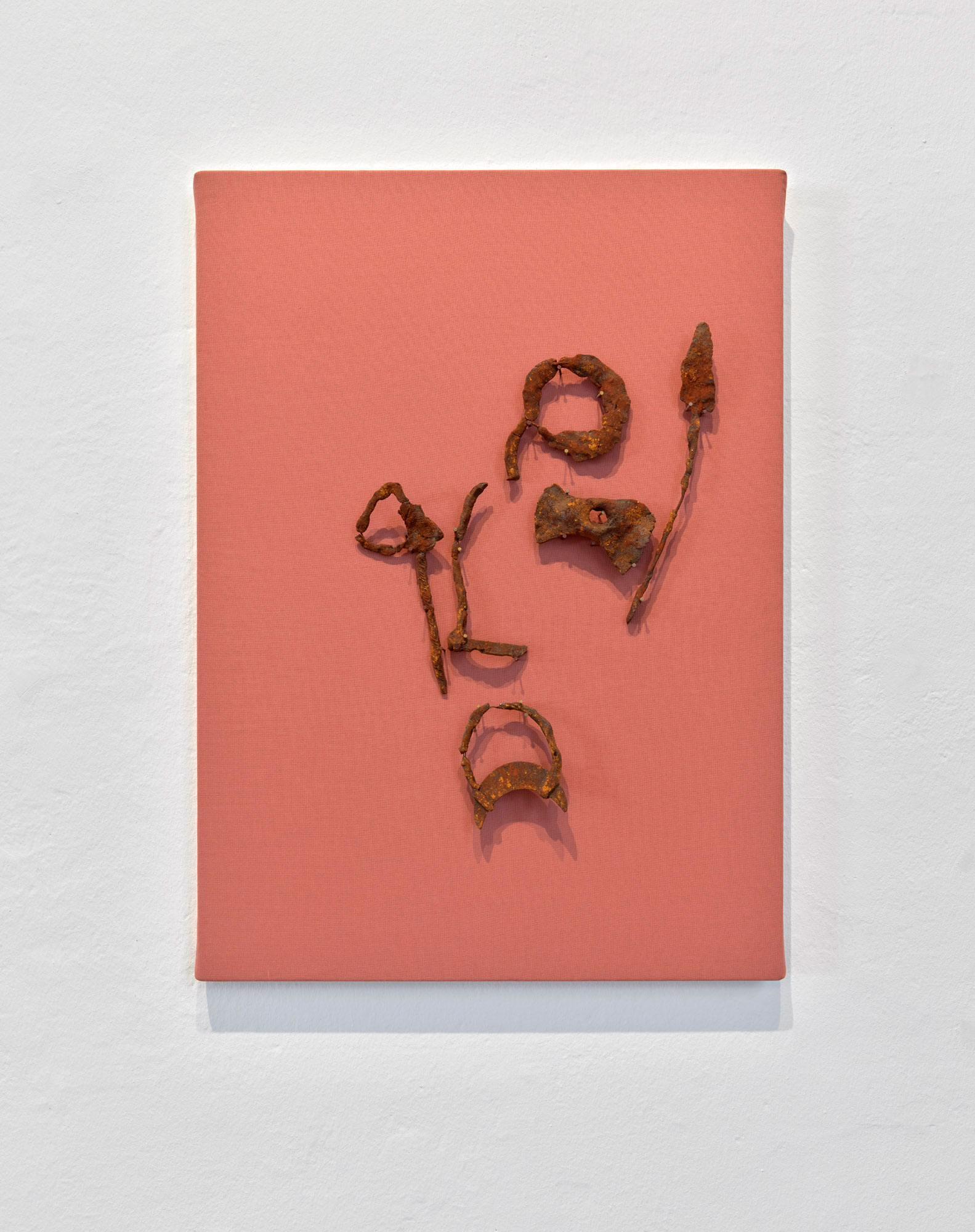