Coeurs Simples was presented at Sans titre (2016), Paris, in September/October 2020.

Is society about to rest on a class of servants again? Are we on a our way back into the Victorian age, back into the 19th century? There is much to suggest this . The service industry is known to have expanded enormously. One half of society makes its living by serving the other. Serving, not only at Starbucks and McDonald’s. ‘Service with a smile’ has also taken root in the cultural sector, where freelancers appear to have become modern servants. Agnes Scherer’s installation-based work leads us back into the era of the maids-of-all-work, and, at the same time, into the reality of today’s cultural freelancers who sit at the bottom end of the industry. The show’s title ‘Coeurs Simples’ gives a hint: Flaubert’s famous story ‘A Simple Heart’ describes the fate of a loyal servant in 19th century rural France. A parrot – first alive, then taxidermied – becomes the sole object of her affection, charged with a hope for something beyond her life of never-ending toil. Flaubert’s naive Félicité is by no means an artist, but a certain measure of cultivated naivety seems to make it easier for artists (and other cultural freelancers) as well to embrace the fate of casualization and precarity. As Félicité deliriously envisions ascending into heaven with her bright-feathered “holy ghost”, artists are fixated on the mirage of their eventual ‘breakthrough’: “Is this the year I’m gonna make it?” is typed into the text field of an online oracle . Fame and wealth, the promise of the art market – for most artists they remain a stuffed parrot.

Occupying the entire gallery space, Scherer’s installation leads us along the precarious realities of life in the culture industry. The modern maid-of-all-work is permanently available and communicates all the time. Scattered all over the gallery’s floor one finds (painted) prints of e-mails written to and by employers, gallerists, collaborators and the job centre. The centrepiece of the exhibition is a long bell board: an antiquated call system, the cables of which connect the gallerist’s desk in the antechamber with the exhibition space in the back. There, beneath these servants‘ bells, a sculptural arrangement represents two women lying on a mattress, working with laptops and mobile phones. We recognise them as revenants of the artist herself. Their contradictory state between rest and hounded productivity conveys a form of existence in which the boundary between the private and the professional is completely blurred: life becomes a 24/7-job.

Not only does Scherer “distort to recognizability” the reality of this kind of daily life by recreating props and utensils – the stuffed parrots – of the era of communication, she also uses the distancing effect of anachronism to bring the present into sharper focus. The communication technologies of the 19th century meet those of the 21st; the servant bell meets the mobile phone. Echoed on a painted laptop screen, we find a Victorian image of a servant who is about to place a new-born in the hatch of an orphanage. She hesitates and has to choose – comparable to freelancers today who have to decide between parenthood and a professional life which is based on short-term (or no) contracts, total flexibility and, therefore, childlessness. As in Scherer’s previous works, periods of history become interlocked. The 19th century appears amidst the 21st. The gallery becomes a negotiation space between an old and a new society resting on a class of servants. Is the 19th century repeating itself as a farce? A tragedy? Or tragicomedy? In any case, in Agnes Scherer’s work, past and present are merged in a puppet show, the art world appears mechanically dramatized as plaster figures flounder on the strings of the business. Scherer’s theatre of the “simple heart” draws the image of a reality in which servants of the past meet those of the present. 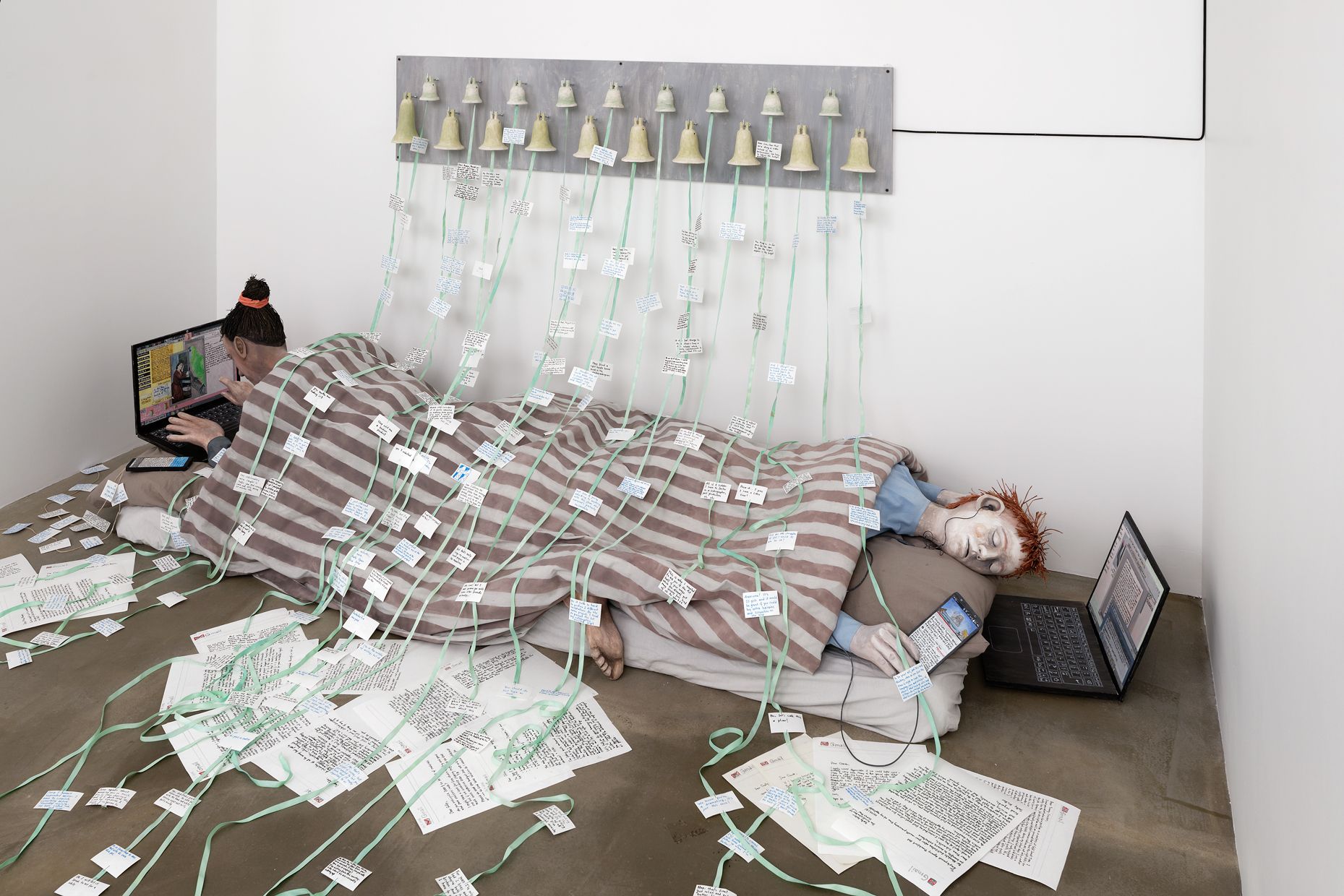 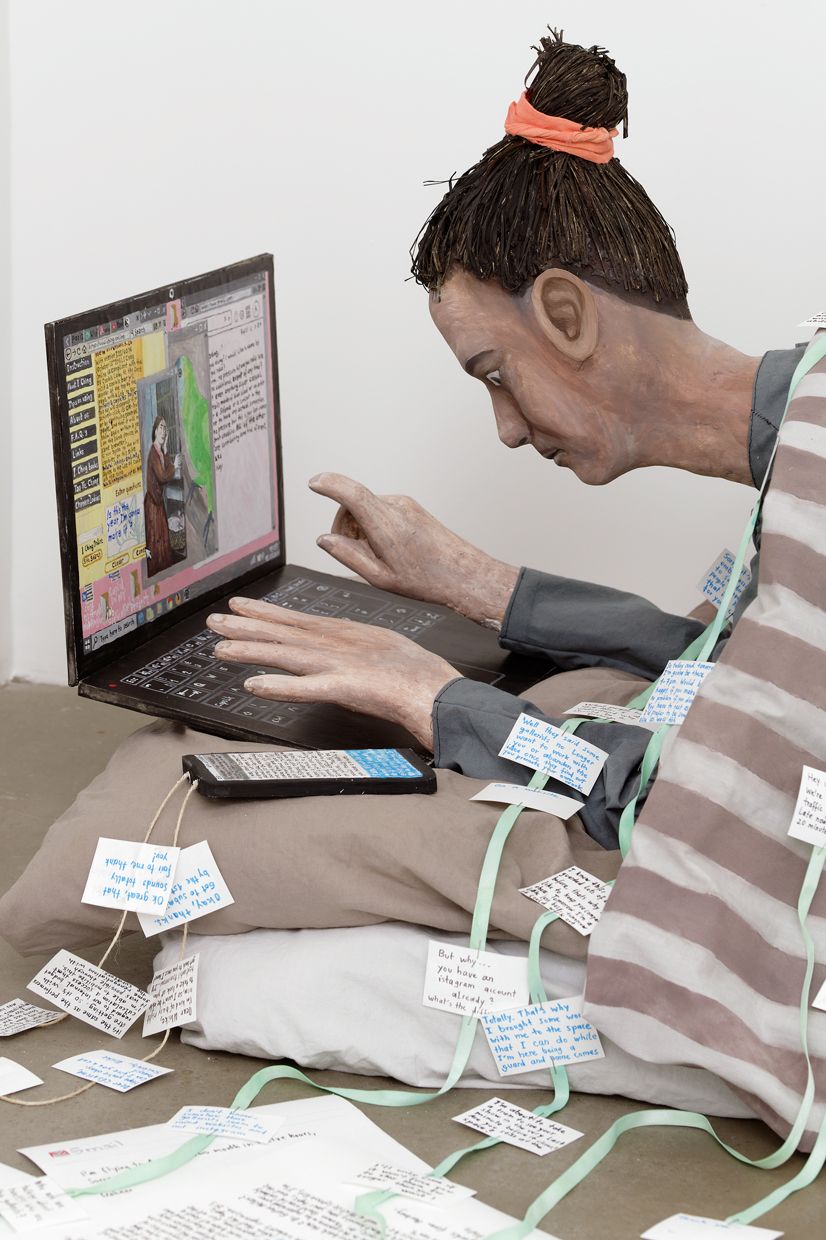 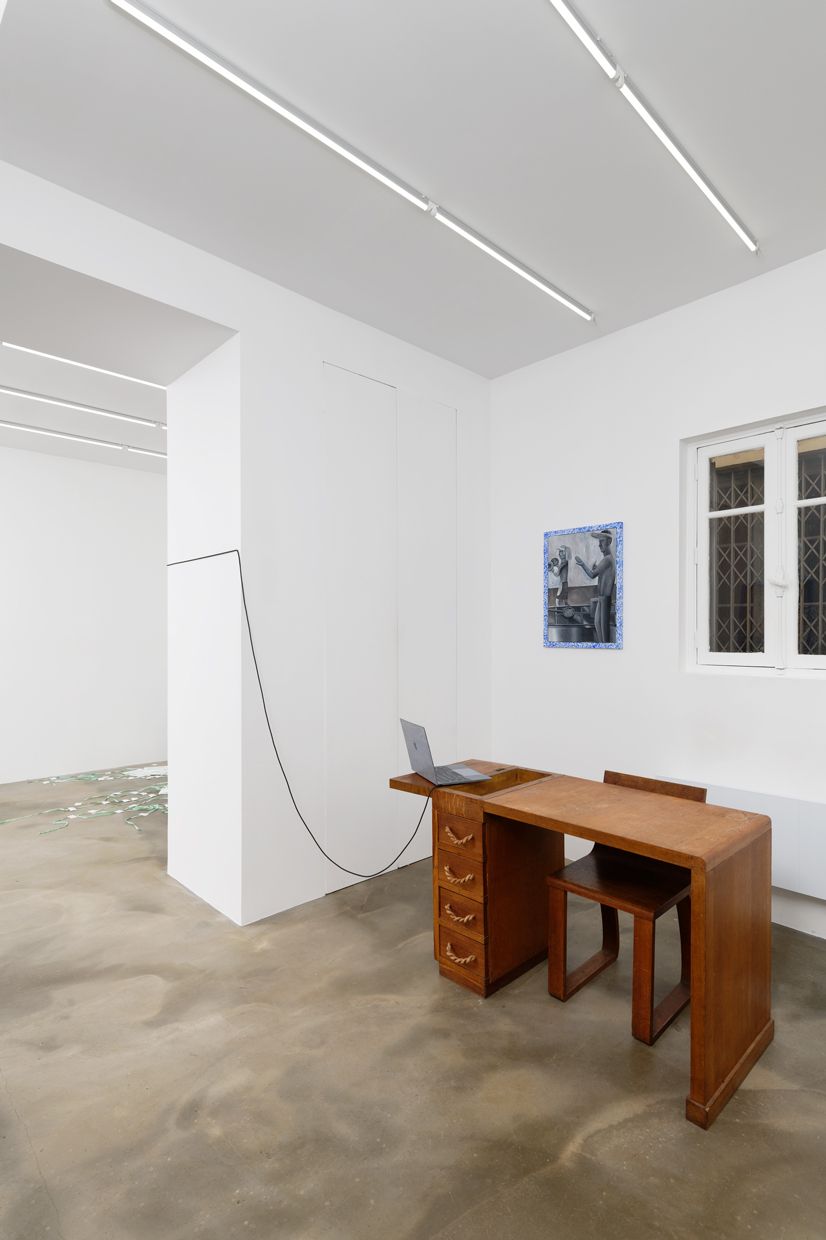 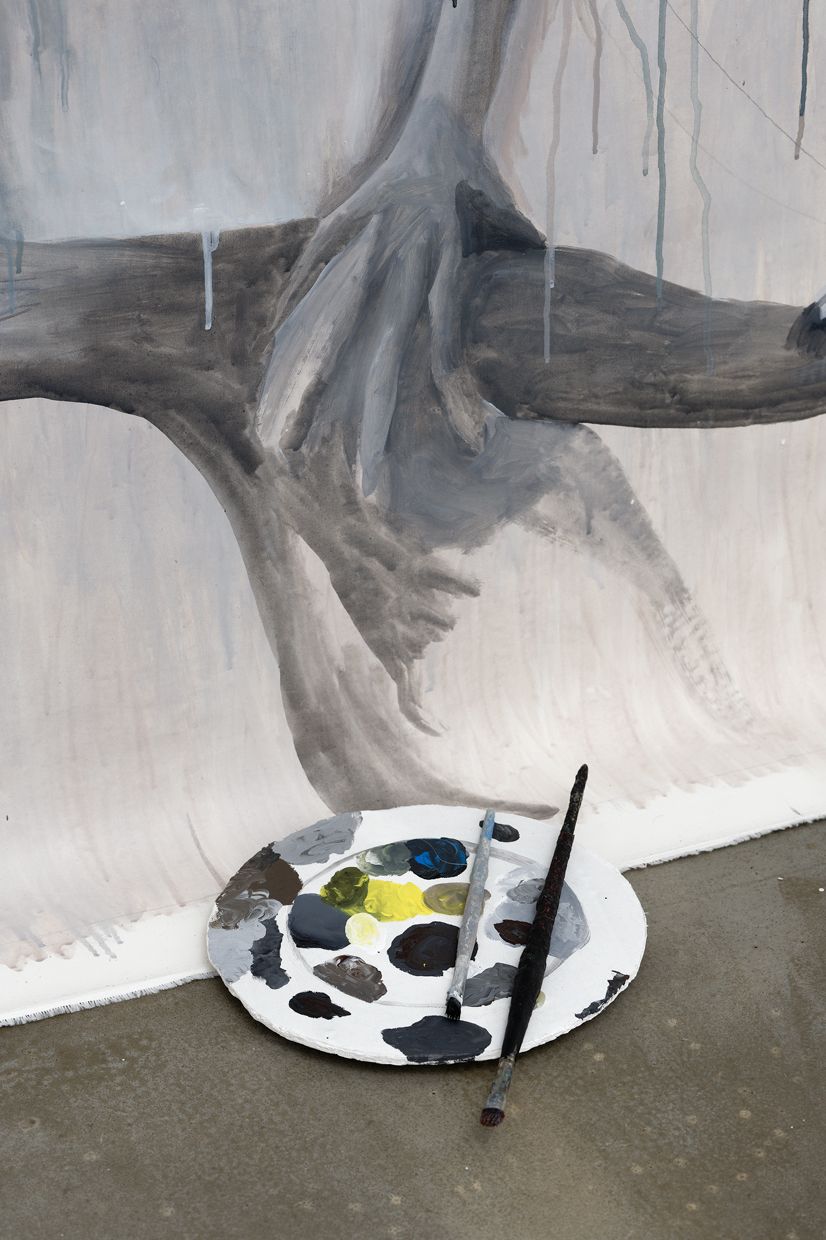 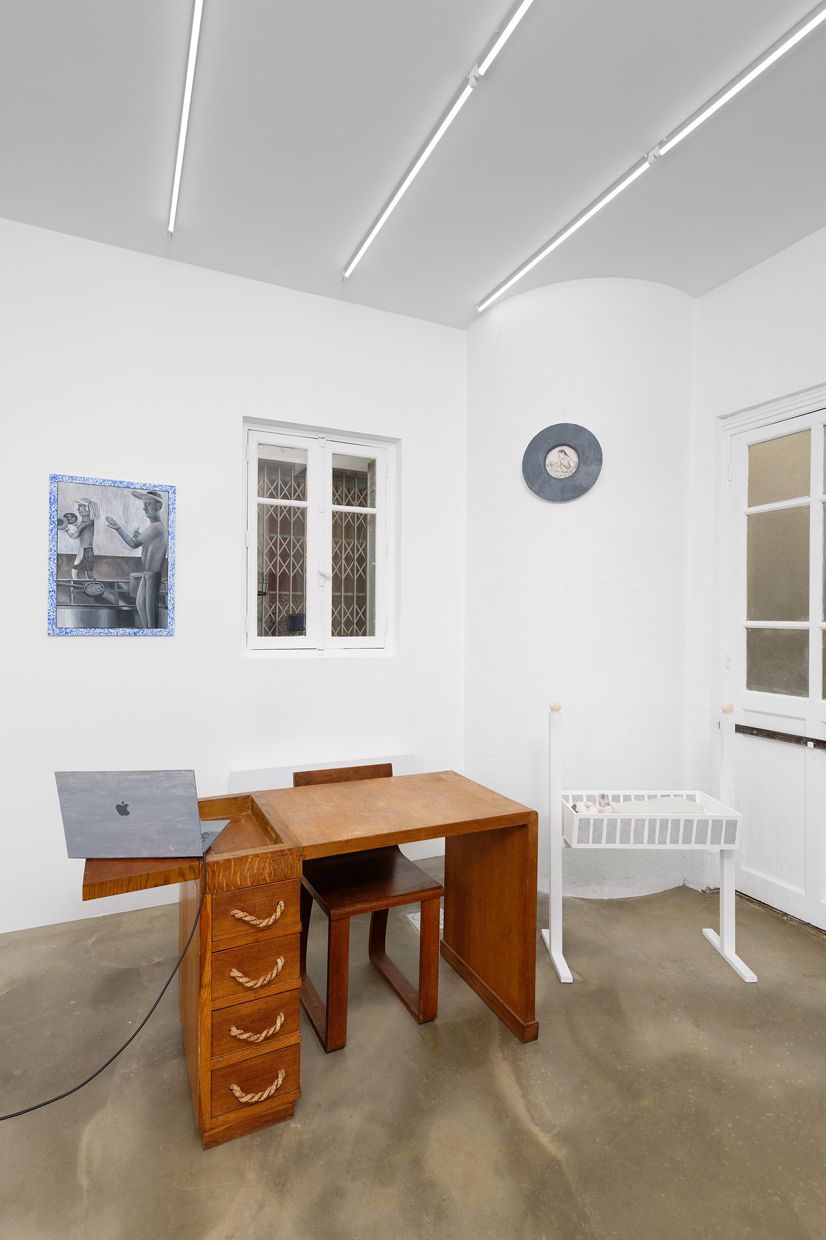 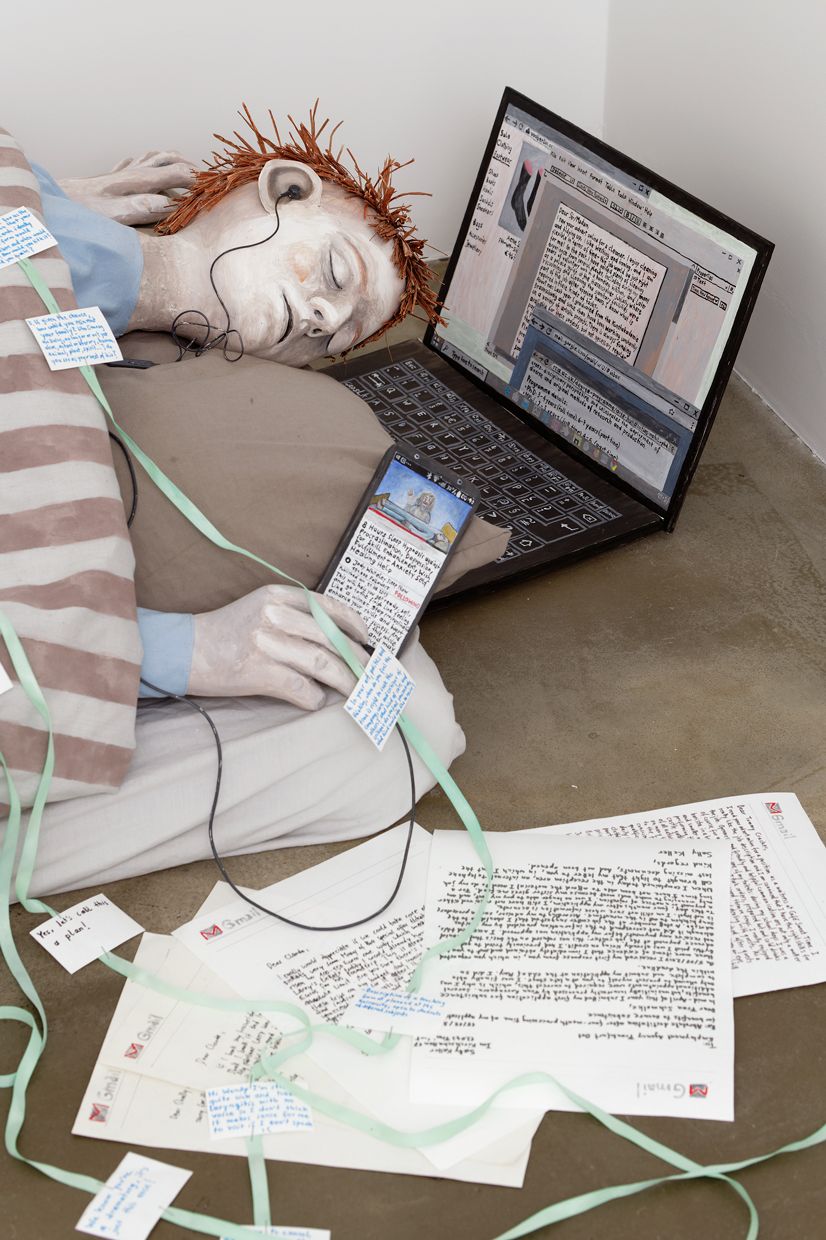 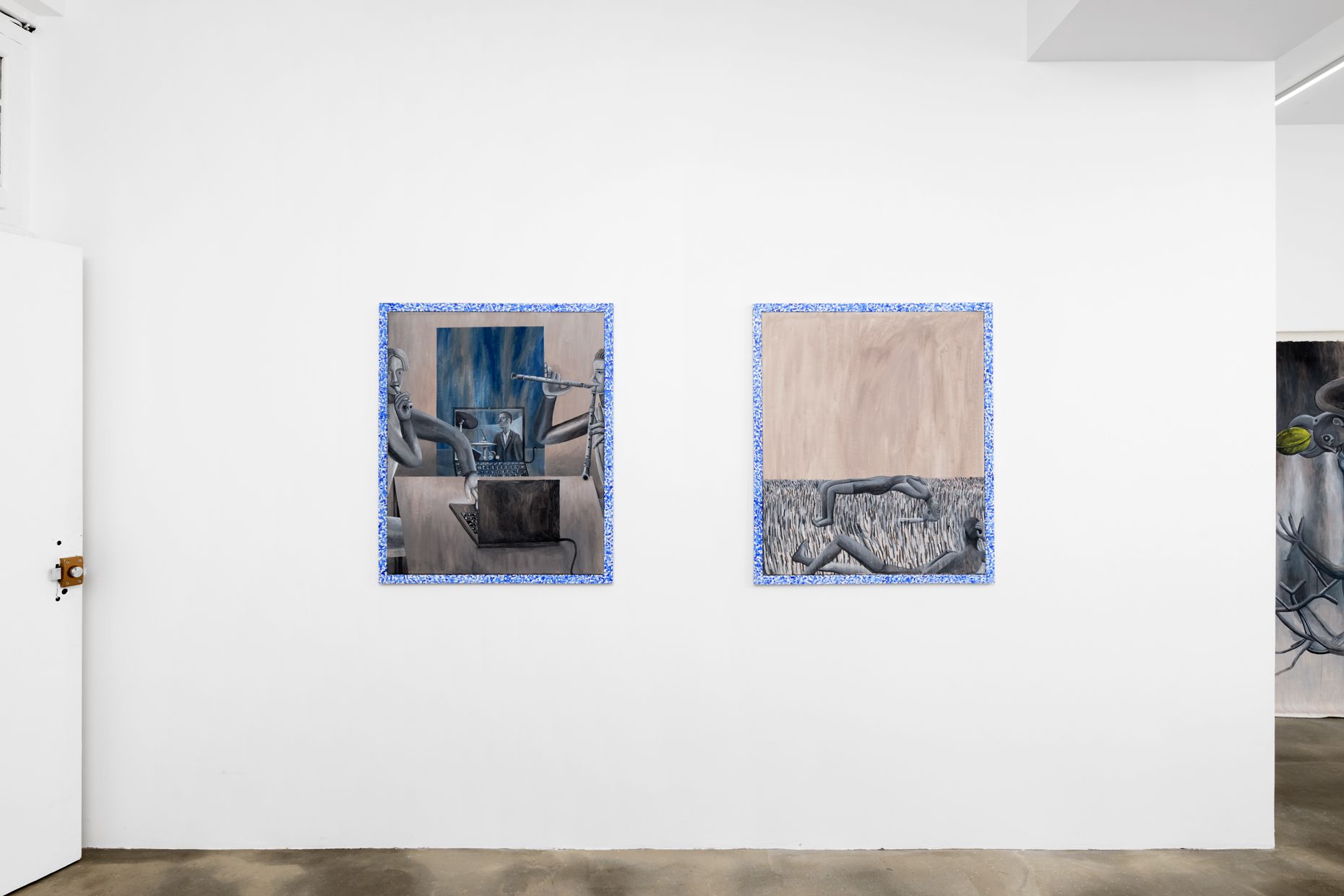 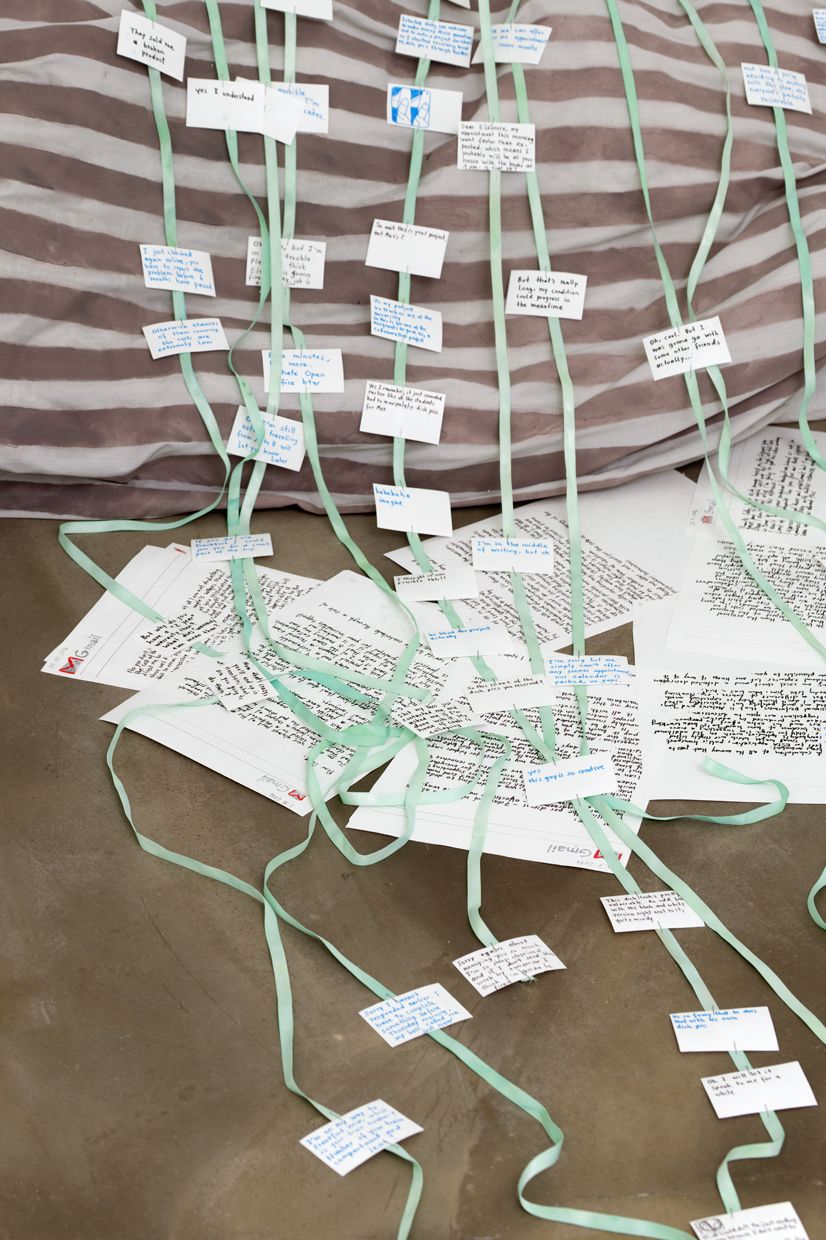 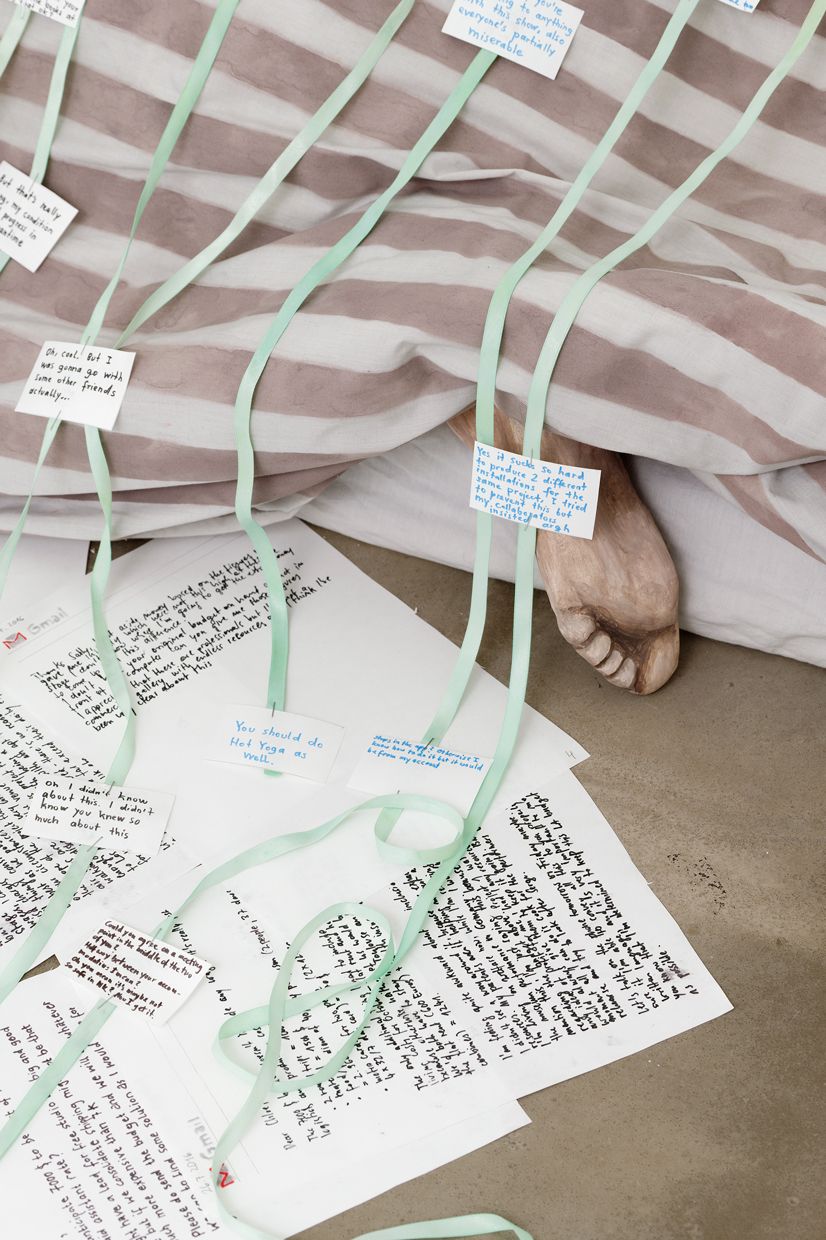 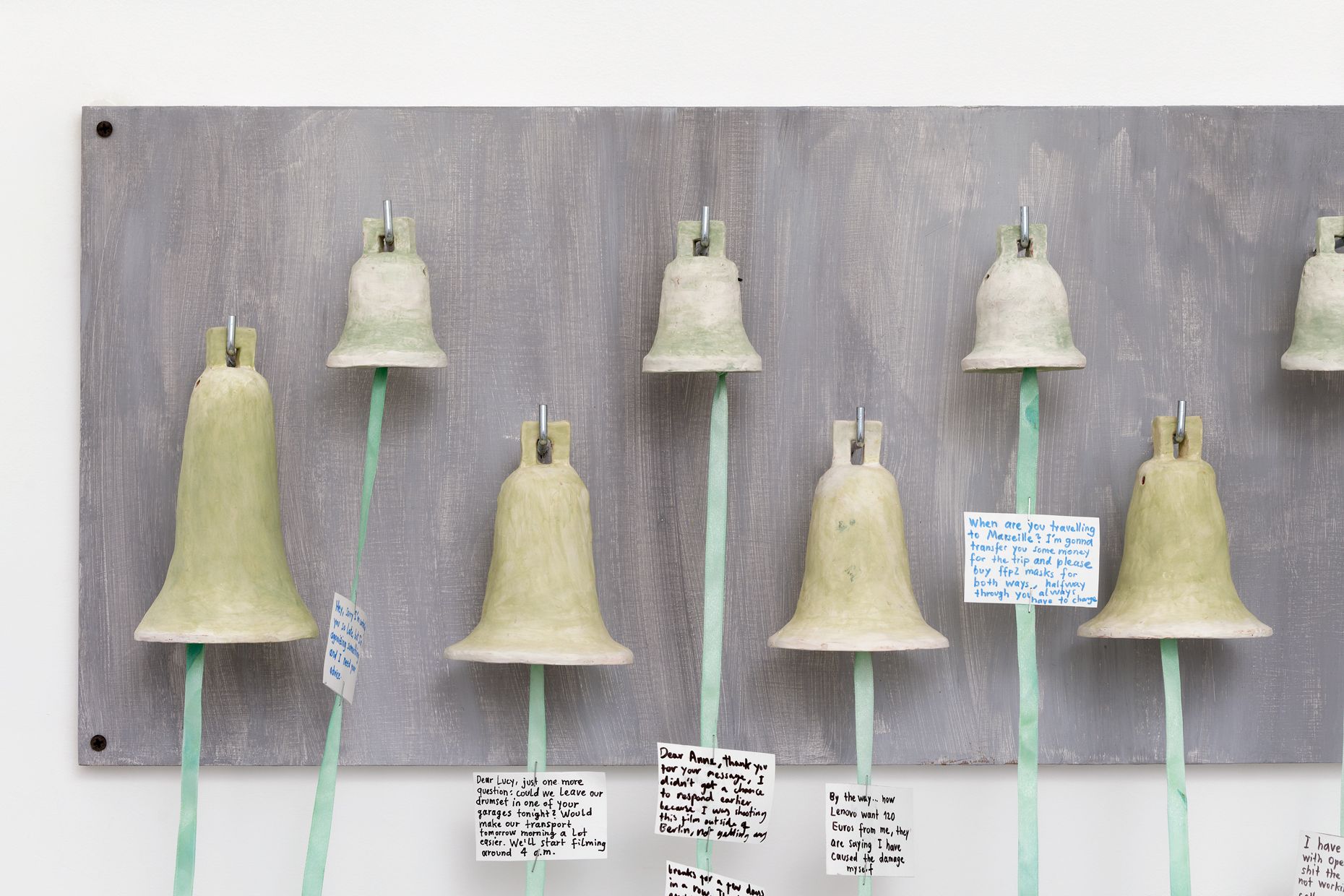 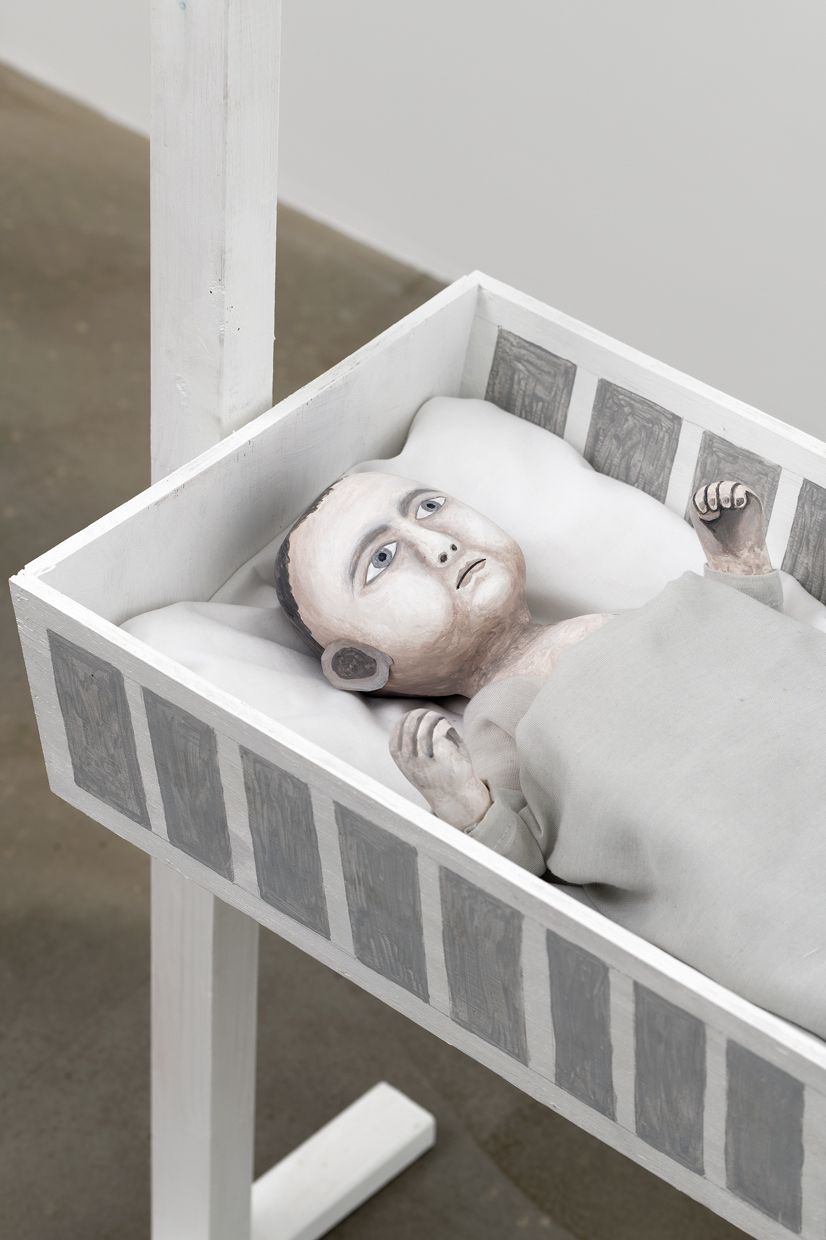 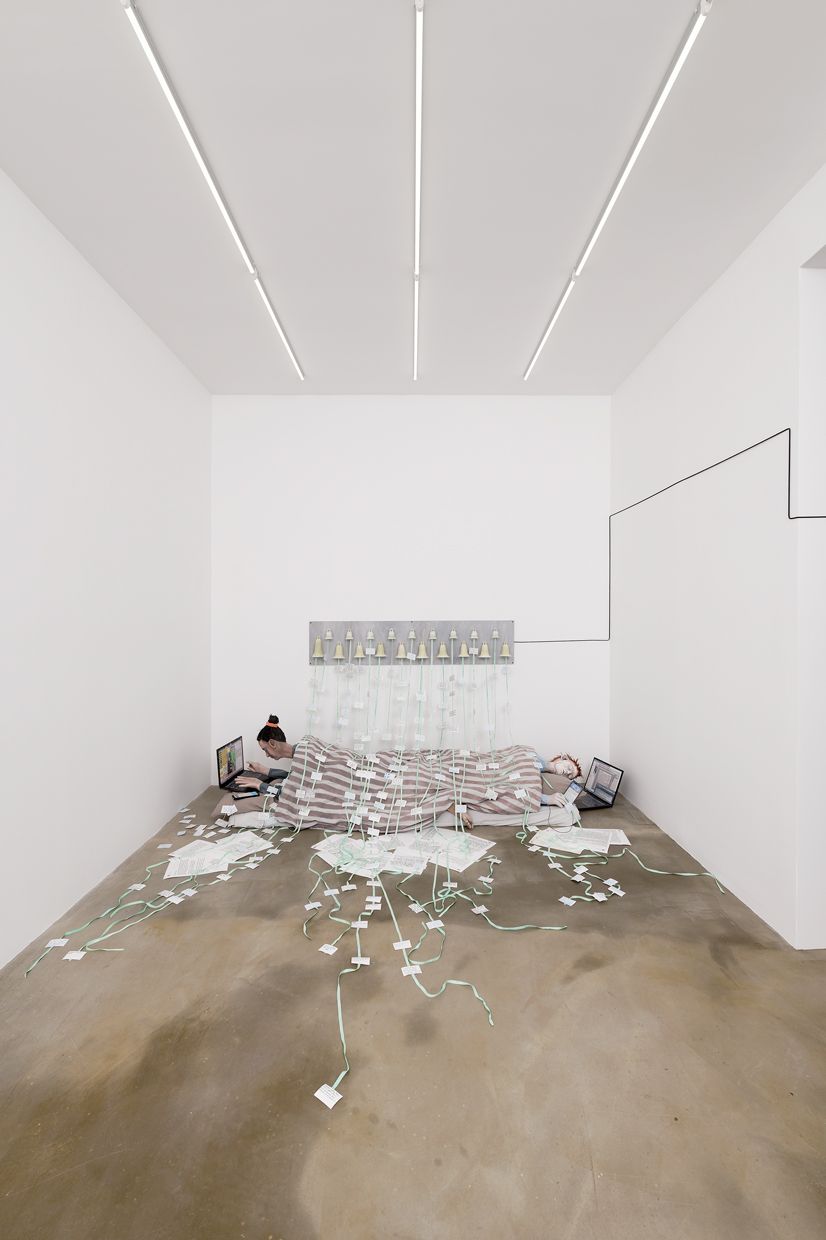 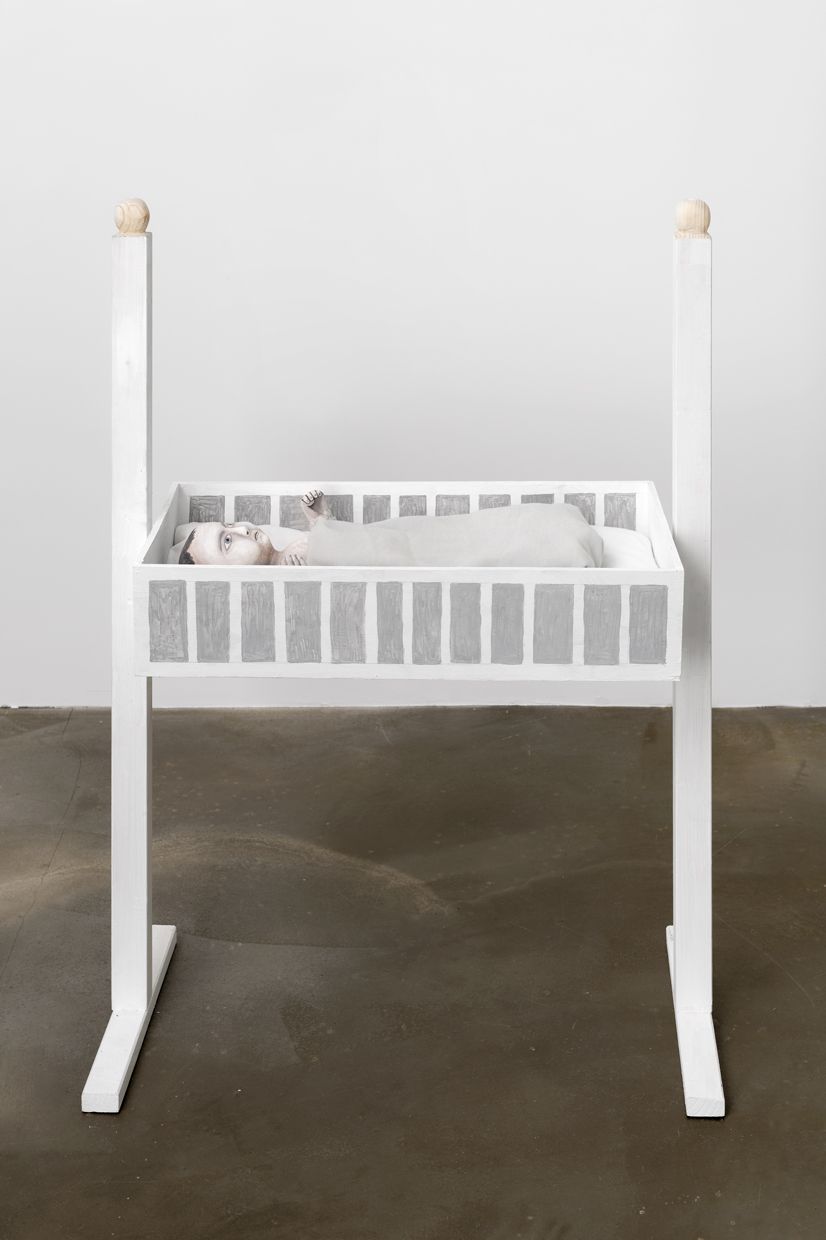