For Summer 2019, Arario Gallery is pleased to present A Shiver in Search of a Spine, in collaboration with ChertLüdde. The exhibition presents the work of four international artists based in Berlin: Sol Calero, Kasia Fudakowski, Petrit Halilaj and Zora Mann, in Korea for the first time. 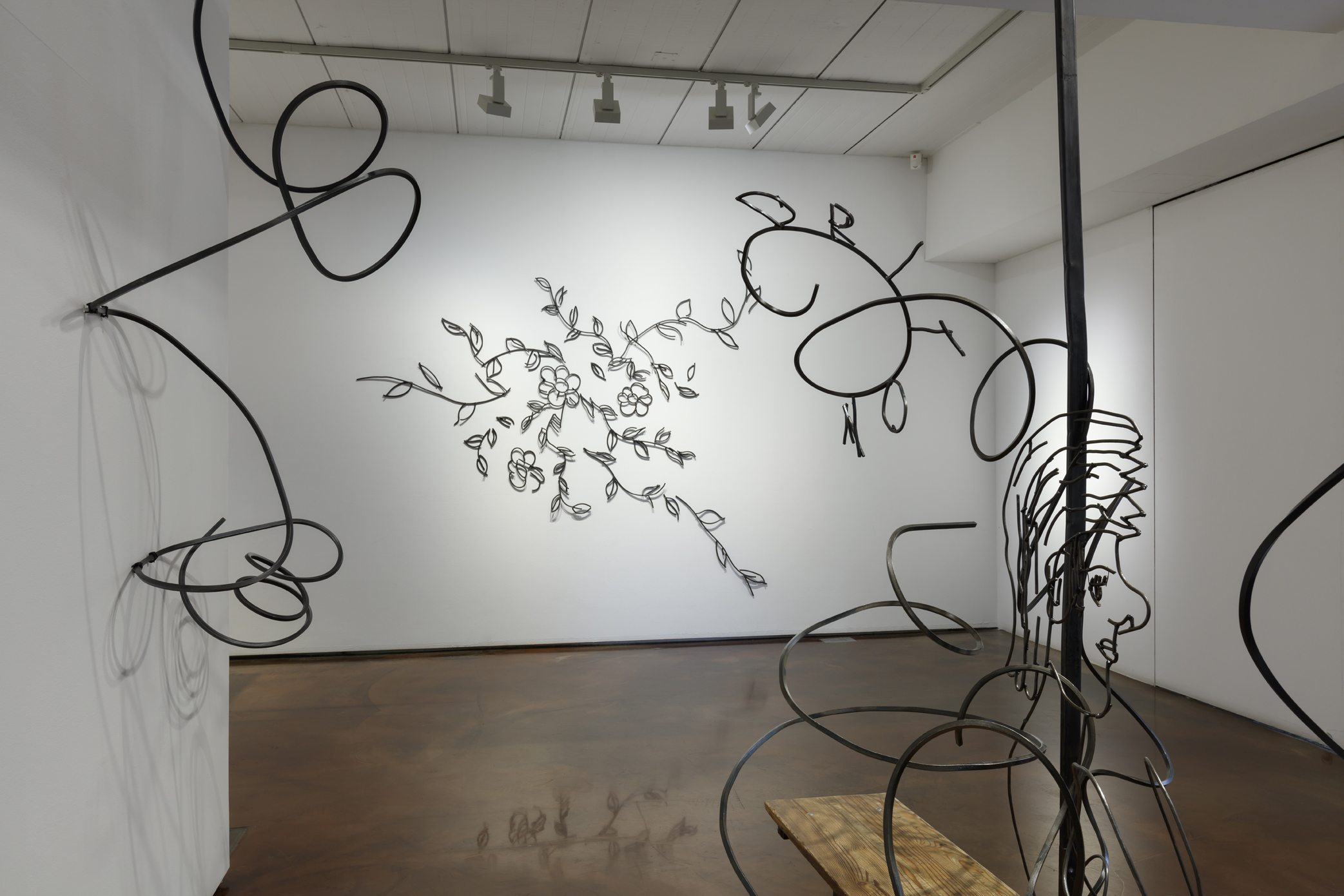 The works revolve around the notion of suspended community and social exchange, approached in particular ways by each artist: be it a monument to the past, a relic of shared labor, a recaptured space or a structure in limbo. A group exhibition spanning multiple years and contexts, A Shiver in Search of a Spine brings together an array of anticipatory impulses, international perspectives and unexpected material translations, aiming to create a narrow but long communicative vessel linking time-space between Korea and Germany.

Sol Calero (b. 1982, Caracas, Venezuela) presents two painting coming from her solo exhibition at Studio Voltaire, Escuela de la Sur, 2015. In the show Calero created an installation centred around the architecture of a school. Working with the gallery’s vernacular architecture, she assimilated its Victorian features into her own visual iconography, one that takes the exoticization of her culture and turns it on its head in an act of reinvention. During the time of the exhibition, the gallery functioned as a school, where workshops took place and students were educated on the history of Latin America and its cultural appropriation by Western society. By creating a gathering place for ideas and education, Calero explores the potential of reclaimed spaces as opportunities for growth and empowerment. Her solo exhibition „El Autobus“ is currently on view at Tate Liverpool, until 10th November. Her work has been showed in venues such as Hamburger Bahnhof Museum, Berlin; La Casa Encendida, Madrid, among others.

Continuouslessness is the ongoing project of Kasia Fudakowski (b. 1985, London, UK), initiated in 2011. Large-scale, narrative panels that do not necessarily relate to each other yet are nevertheless connected, form the never-ending screen format, which is a paradoxal juxtaposition of ideas. The panels allow an unlimited space for the deployment of materials, forms and ideas, refusing categorization and strict definitions. The most recent series of four panels made especially for A Shiver in Search of a Spine are grouped under the title A Punishment in Search of a Crime in which Fudakowski explores the hidden penalties involved in citizenship and the inflexibility of laws created with another person or another time in mind.

Her work has been exhibited in international venues such as 15th Istanbul Biennial; Kunstmuseum St.Gallen; Moscow International Bienniale; Museum Ludwig, Cologne; Sprengel Museum Hannover; among others.

The iron sculptures by Petrit Halilaj (b. 1986 Kostërrc, Skenderaj-Kosovo) comes from the series Abetare, first begun in 2015, are the result of his pilgrimage back to his home town in Runik, Kosovo, where he visited his old primary school that was set for demolition. Halilaj salvaged the school desks and replicated the graffiti on them to create large-scale sculptures of cartoonish figures, scribbles and drawings. A celebration of play and imagination, the works are also the artist’s memorialization of his childhood and past. Halilaj’s exploration of his personal history is inevitably also a communal one, a narrative undeniably marked by war. By documenting and preserving that which is lost or fading, Halilaj partakes in the continuation and growth of his culture. In 2020, Halilaj will present two solo exhibitions respectively at Palacio de Cristal, Museo Reina Sofia and Tate St Ives. He represented Kosovo for the coutry’s first national Pavilion at the 55th Venice Biennial, 2013, and won the Jury’s prize in the 57th Venice Biennial, 2017.

Zora Mann’s curtain Cosmophagy was created in 2015, made out of recycled flip flops found littered on the beaches and waterways of Kenya. Mann had been a part of an initiative began by marine conservationist Julie Church in the nineties, a recycling project that reuses discarded flip flops, one of the largest marine pollutants on the Indian Ocean beaches. Along with Kenyan artisans, volunteers create crafts out of the repurposed materials. Here, the curtain transcends its decorative function and beyond the precursory glance becomes a manifestation of communal labor and commitment, and a greater awareness of one’s surroundings. Upstairs and on the ground floor of the gallery, Mann displays painted wood sculptures from her „shields“ series, resembling ballistic shields used during demonstrations. Each shield bearing the name of the artist’s close friends and/or relatives, acts as a connecting membrane. Zora Mann had a solo presentation in 2017 at Art Basel Statements; at Kunsthalle Baden Baden and she was part of a group exhibition at Palais de Tokyo, Paris.

While simultaneously influenced by myriad artistic references unable to be gathered into a single entity, the participating artists unravel images entangled in varying social identities and politics of order with unforeseen sense. Artists who have seen what should not be seen, witnessed what they did not want to see, who know the fear of a situation unable to be returned to its unseen condition, just like a ghost they draw us into unfamiliar experiences that split open a crack in everyday life. Summer, when searing sun and pitch dark coexist, the shiver that will arise in our lives—we hope that you may experience this through this exhibition.

The accompanying exhibition text written by Kasia Fudakowski is an extended anecdote relating the artist’s fears of both the supernatural and imagined horrors she perceived in spending the night in new and unfamiliar places. It speaks to the decision processes we go through when deciding where and how we feel safe, and the structures or beliefs to which we attach our fears. The title of the exhibition relates to the common experience of a shiver down the spine during an uncanny, or unsettling experience, but here the shiver is actively in search of the spine, suggesting both the potential motion and the structure, but suspended in time. 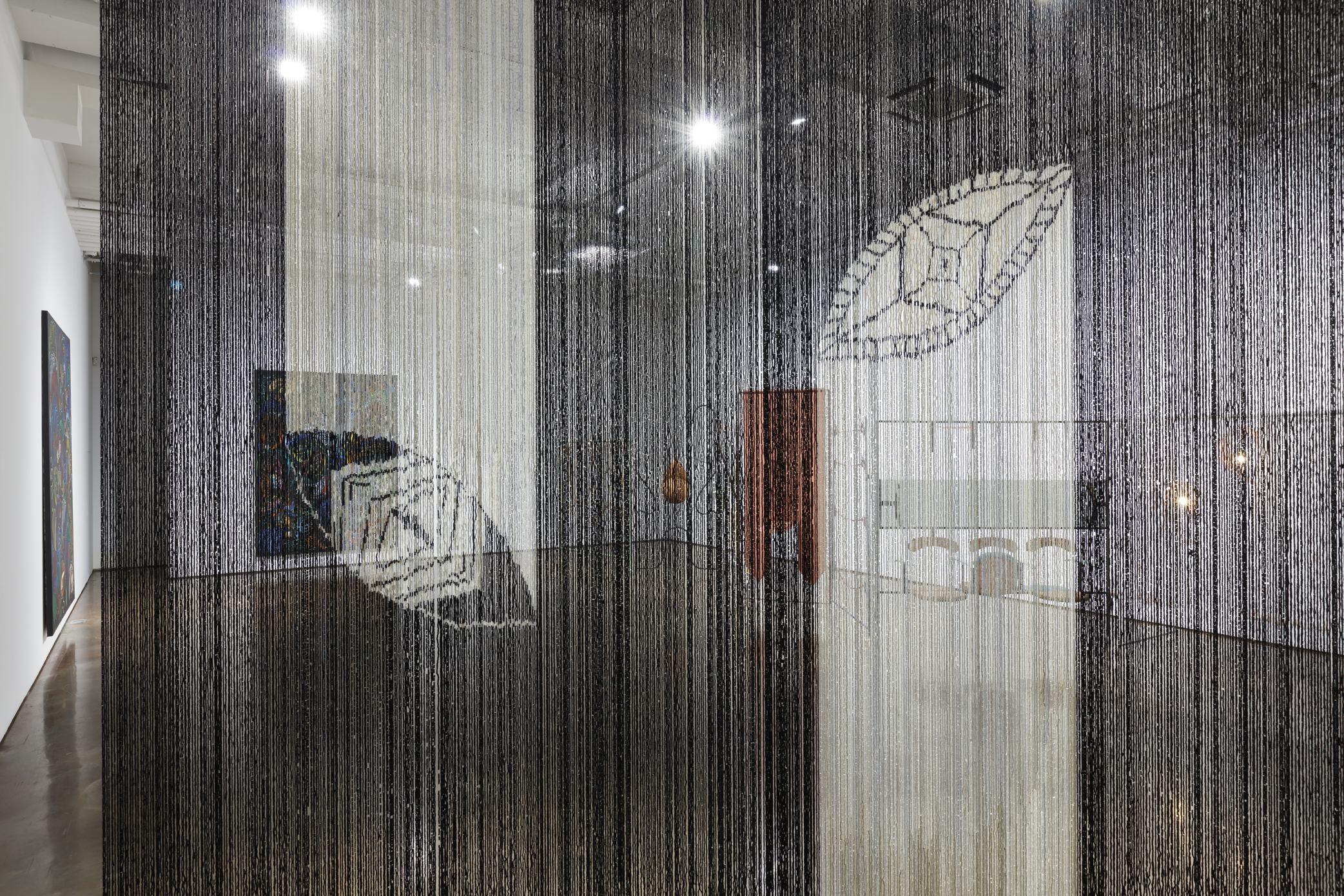 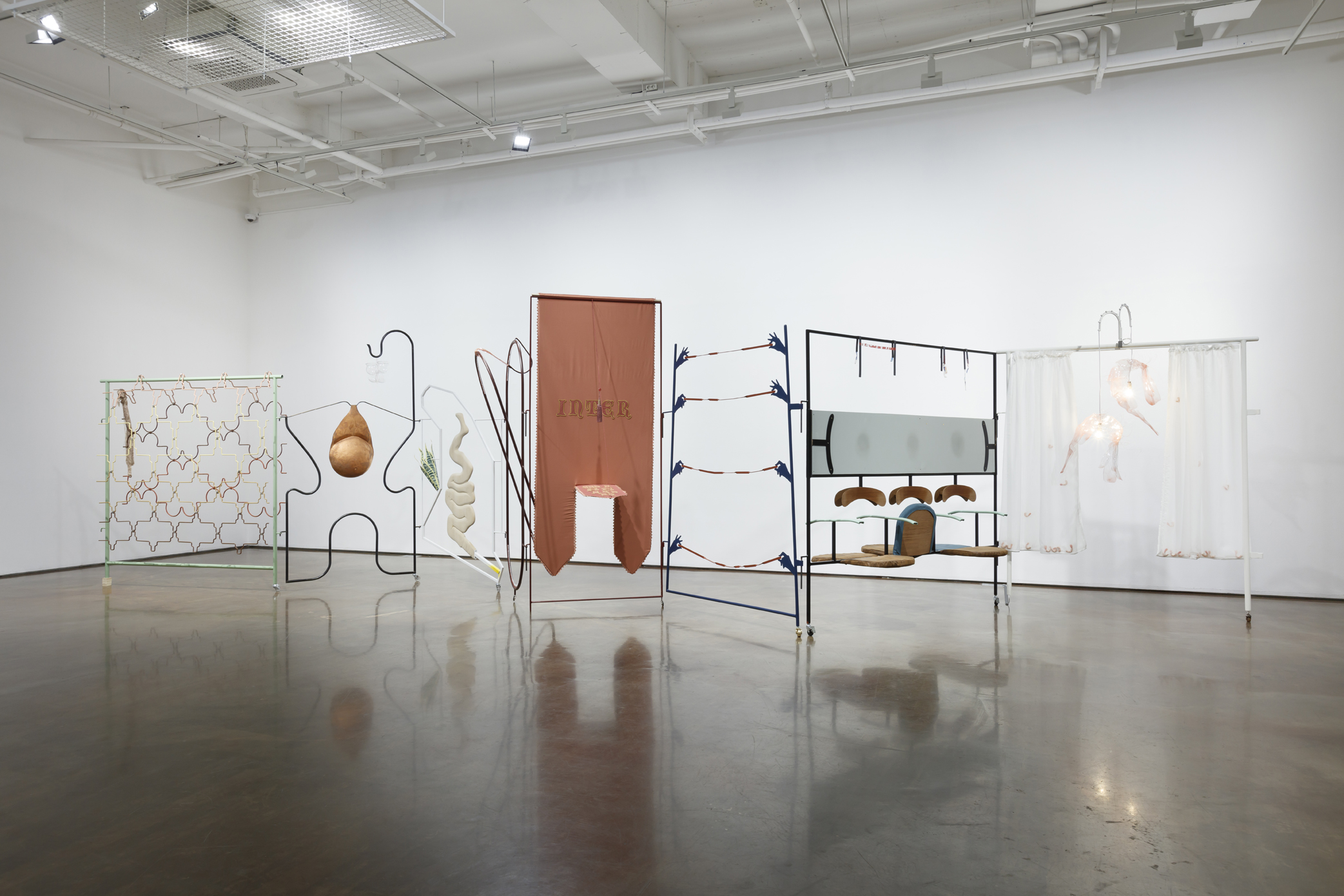 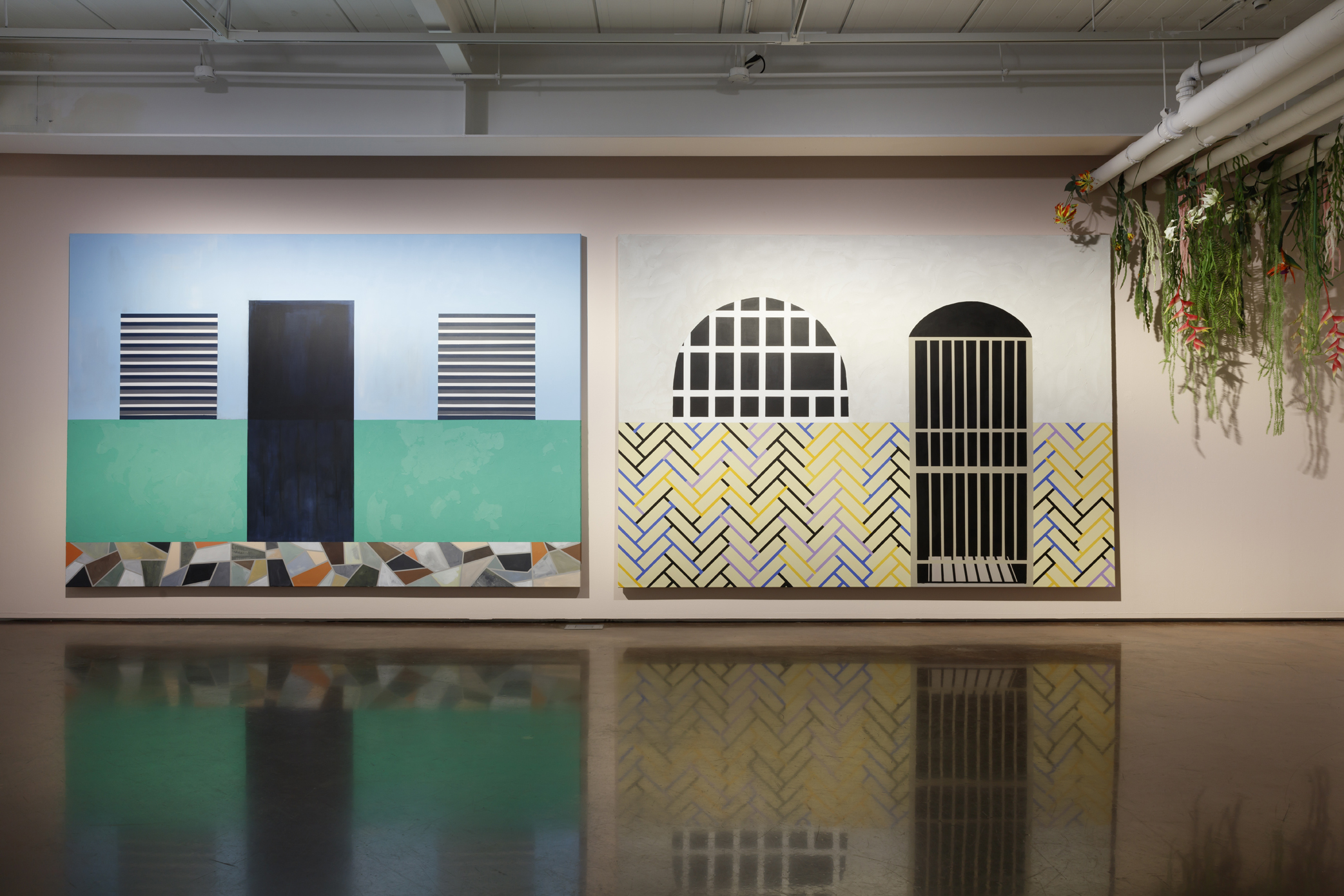 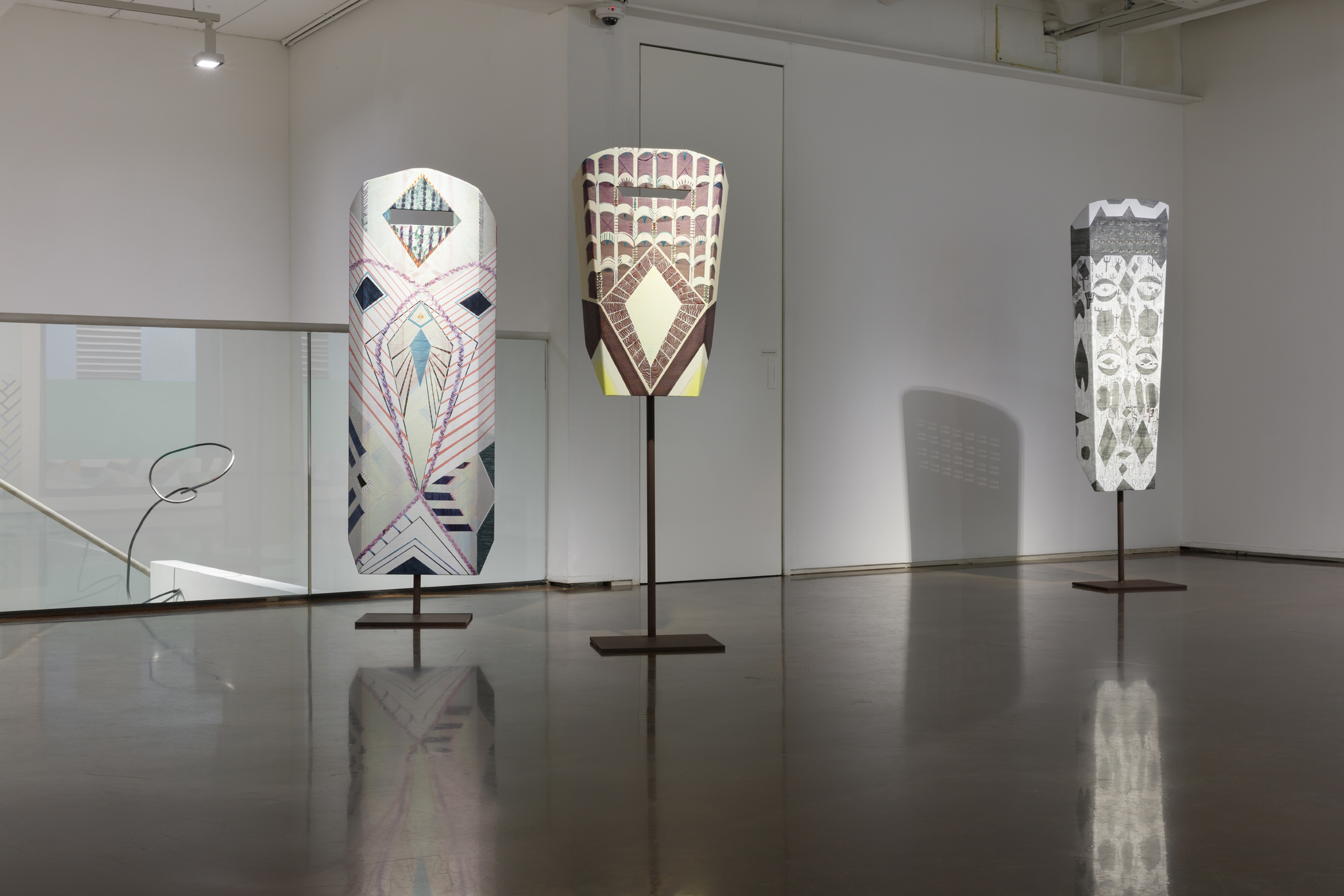 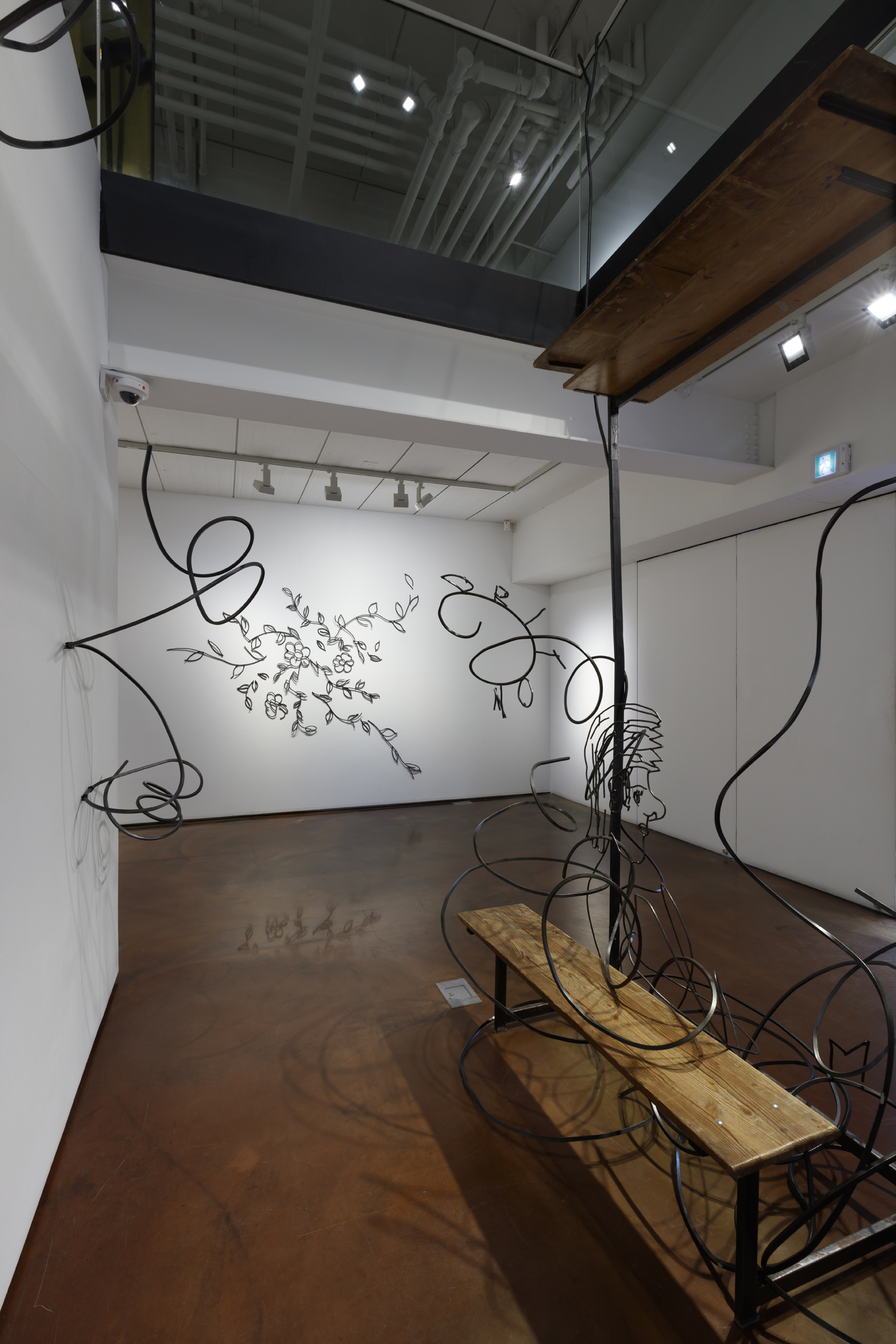 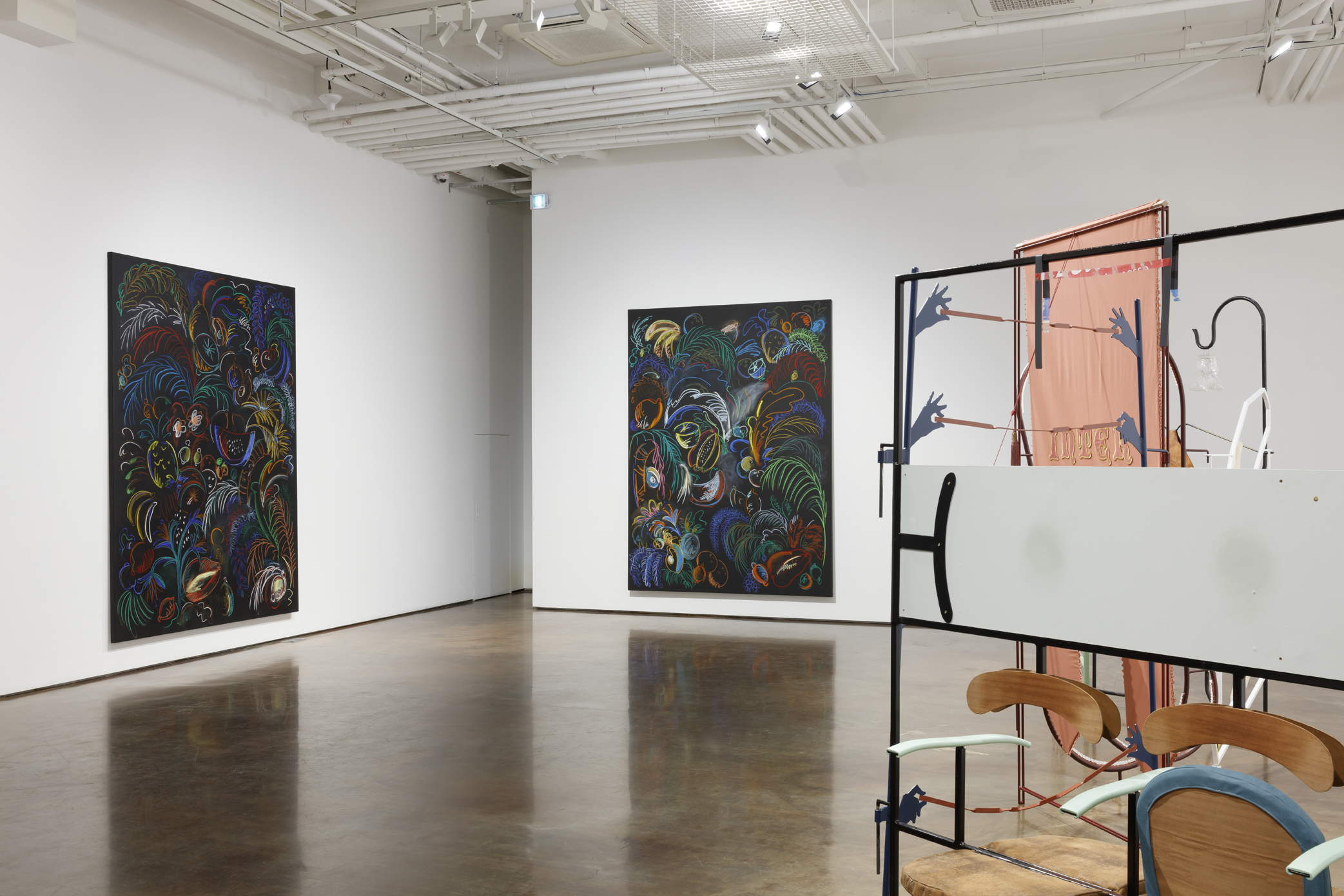 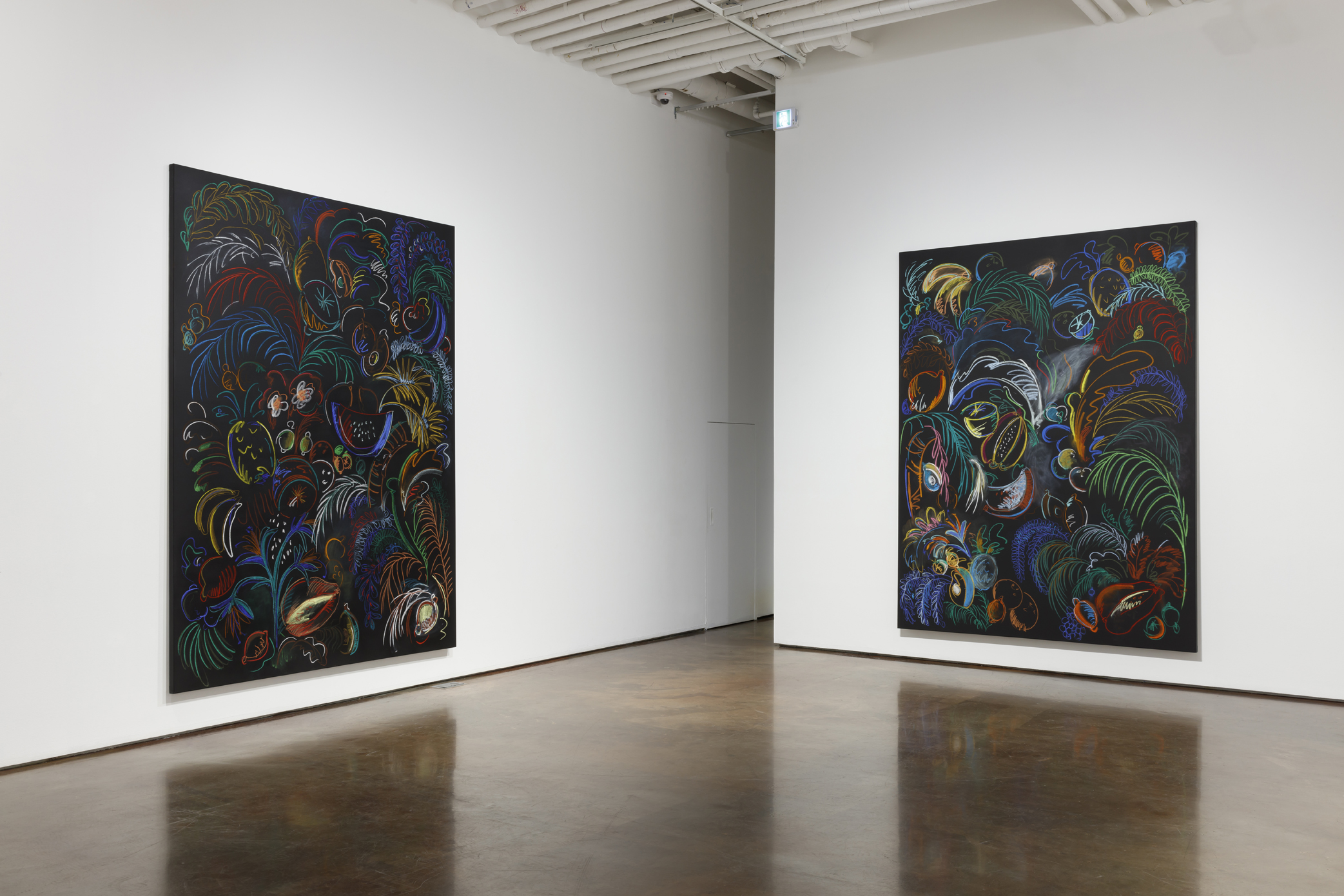 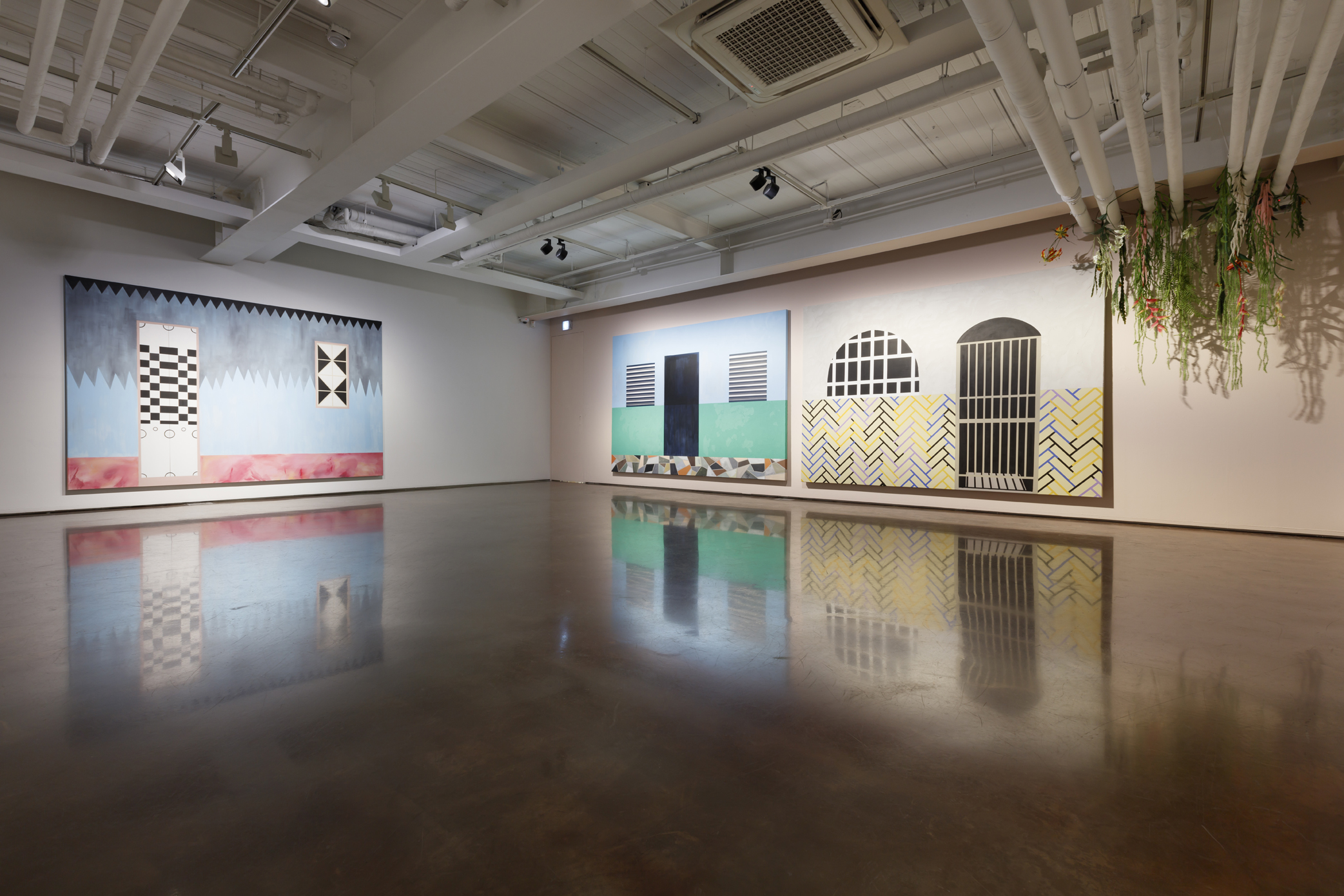 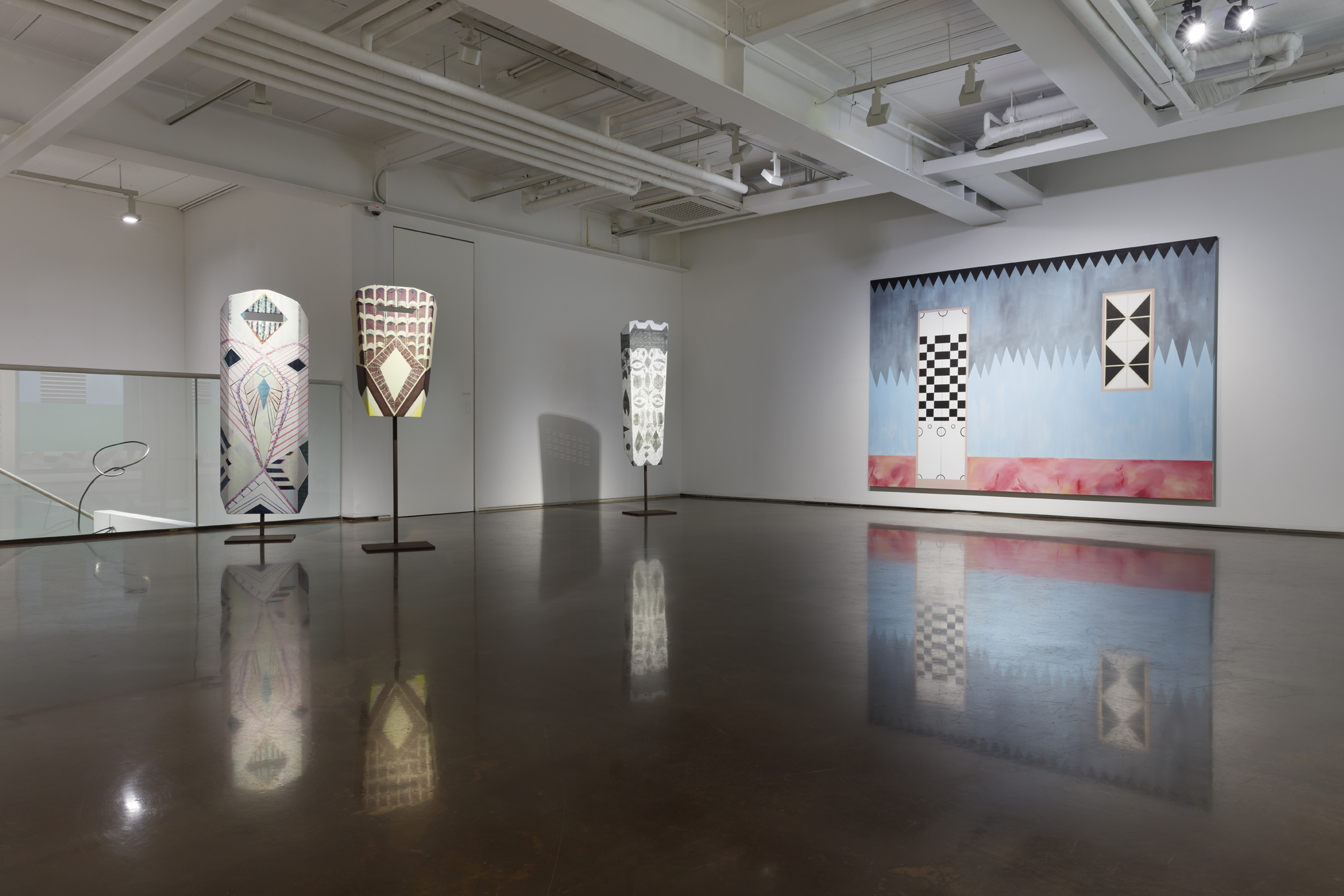