The Notebook Simulations is the first institutional solo exhibition by Agnes Scherer. Over the past few years the artist, who studied in Düsseldorf but is now based in Berlin, has developed a unique style of working in the inter-zone between exhibition and stage play, uniting sculpture, painting, drawing, music and performance in multi-layered operettas and narrative installations. Taking her research into cultural and art history as a starting point, she deploys often disparate historical forms of presentation and points of reference superimposed on one another. Her artistic adaptations make use of consciously positioned anachronisms as alienation strategies in order to expose power relations and to bring current issues all the more clearly to the fore.

For her current exhibition at Kunstverein Düsseldorf, Agnes Scherer has produced an installation consisting of nine monumental, supersized “laptop simulations”, whose painted flat screens display mythical and puzzlingly mysterious scenarios alongside elements of “contemporary folklore”: With reference to the gouache collection of the Augsburg Book of Miracles[Augsburger Wunderzeichenbuch] from the 16th Century – in which natural phenomena are presented as portents or premonitions – Scherer too illustrates numerous wondrous occurrences and inexplicable cosmic phenomena in combination with error messages from the Windows operating system and endlessly multiplying programme windows. Her pictorial creations are commented on by texts and messages, which she has inscribed as pointers to her own authorship on the keyboards of the mobile computers – here, instead of regular keyboards, can be found, for example, sequences of letters and signs transformed into subjective codes, or also a self-portrait of the artist.

In their strict arrangement, which recalls megalithic stone formations and ancient temple sites, Scherer’s notebook simulations have the appearance of the archaic ruins of an era in the process of drifting away into the past. The opener for her installation is the work Der Perseidenschauer [The Perseid Meteor Shower]. It shows a natural phenomenon that Agnes Scherer allegedly once witnessed with a friend in a Scottish marshland. In addition to this annually occurring meteor shower, however, there was also, Scherer states, an inexplicable sphere of light, a will-o’-the-wisp, a ghost light. At first seemingly easy to locate, it repeatedly shifted its position, remaining finally out of reach. Just as the ghost light only pretends to have a precise position and sets in motion a never-ending game of catch, so the artist’s image and text motifs provide numerous levels of interpretation, which can, however, turn out to be deceptions. Baroque emblems, the window topos recurrent since the onset of the modern age, surreal illusions, and computer interfaces combine to form laptop diptychs overflowing onto the walls of the exhibition space. By stringing digressions together in will-o’-the-wisp-like fashion, Scherer makes the issue of intentionality a central object of interest – the intentionality both of the artist and that of the metaphysical arbiters who play their impenetrable games with earthly figures on the pictorial surface.

*From the press release of The Kunstverein für die Rheinlande und Westfalen, Düsseldorf. 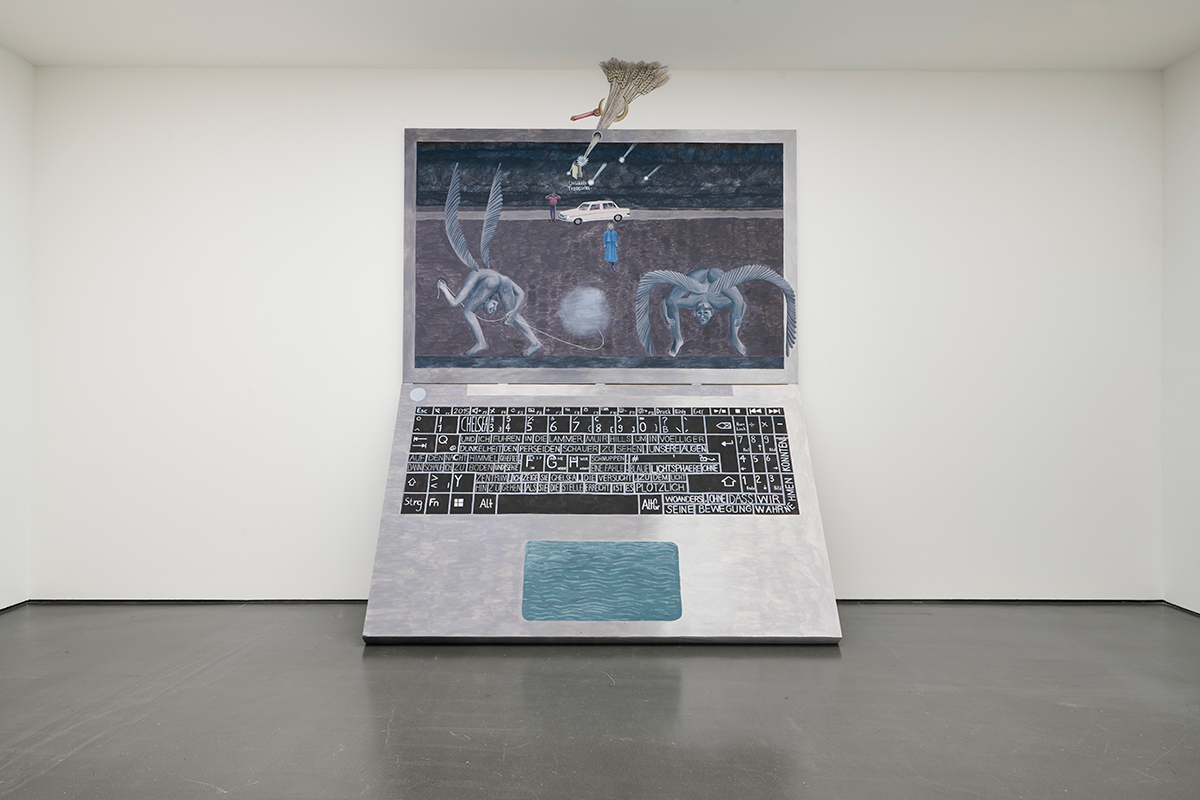 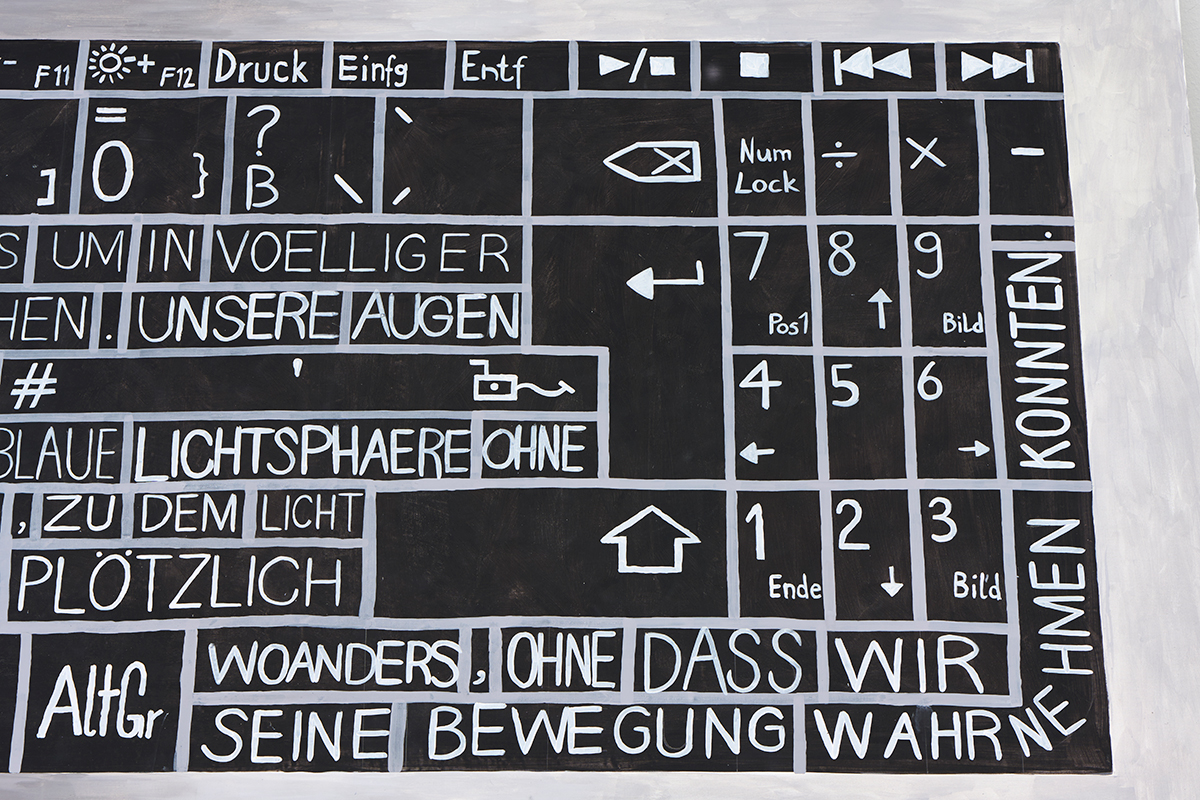 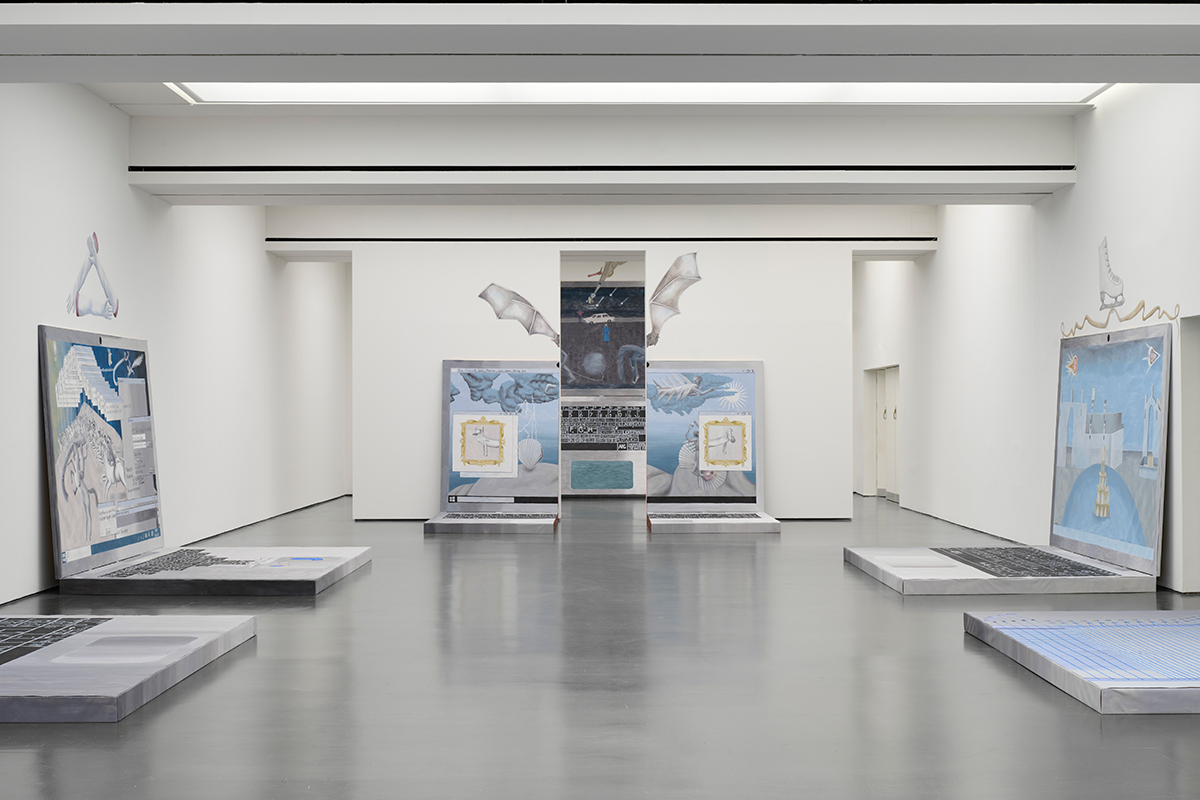 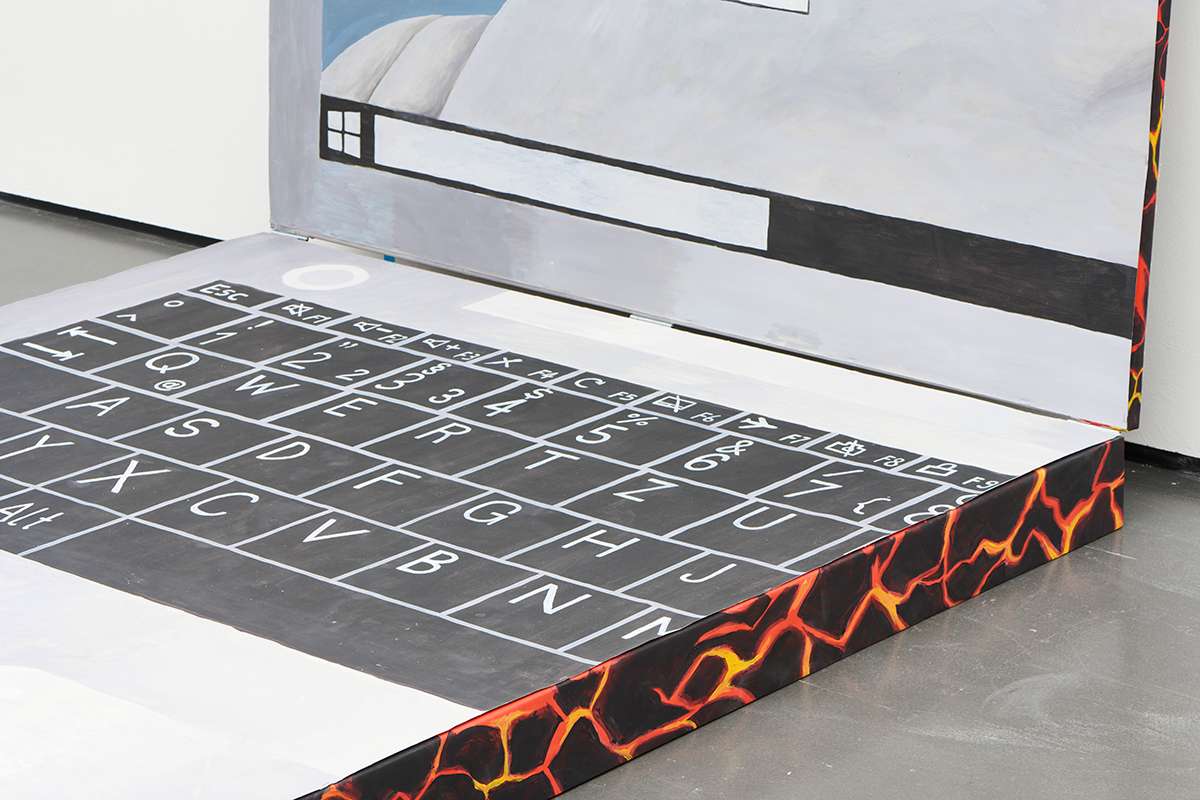 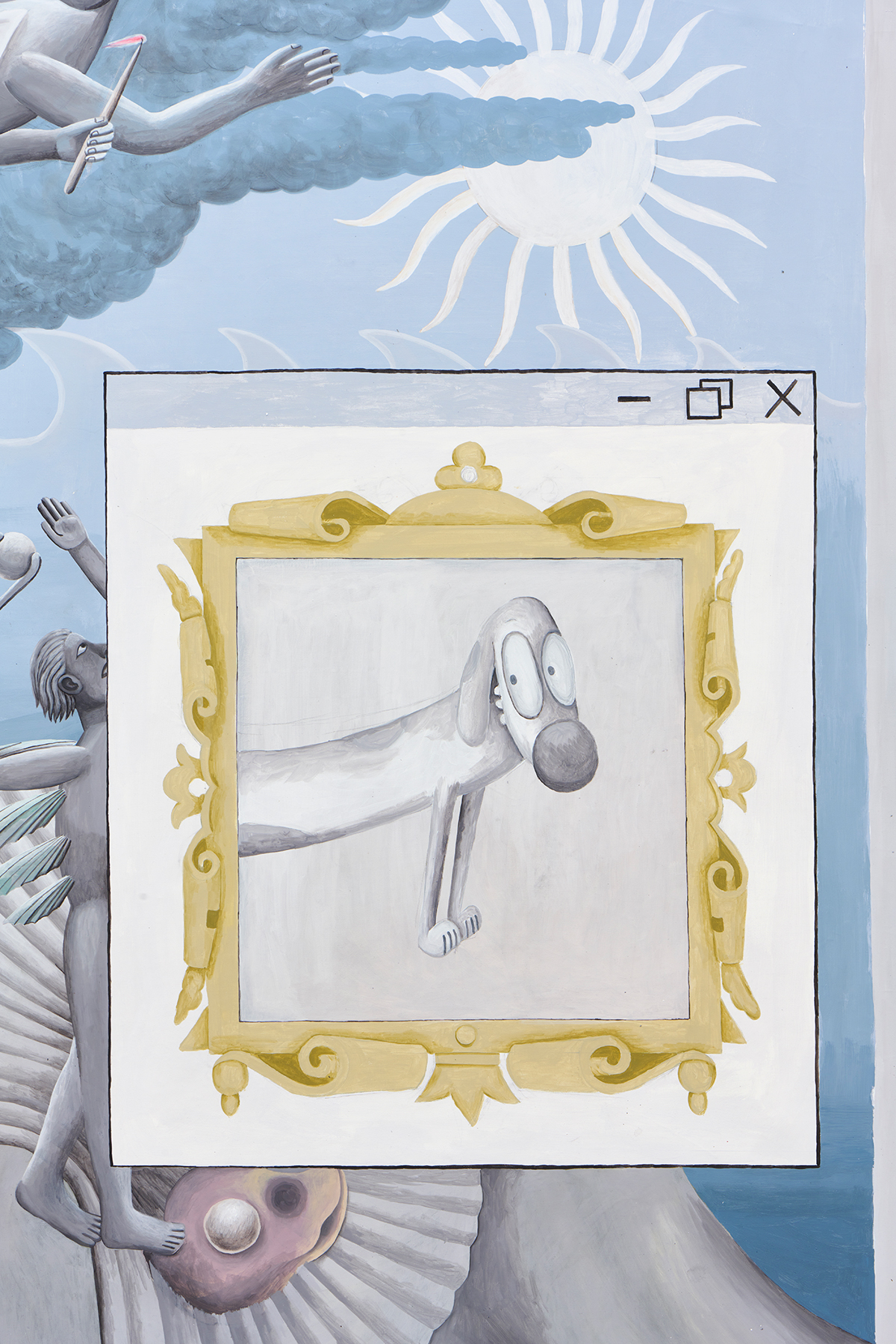 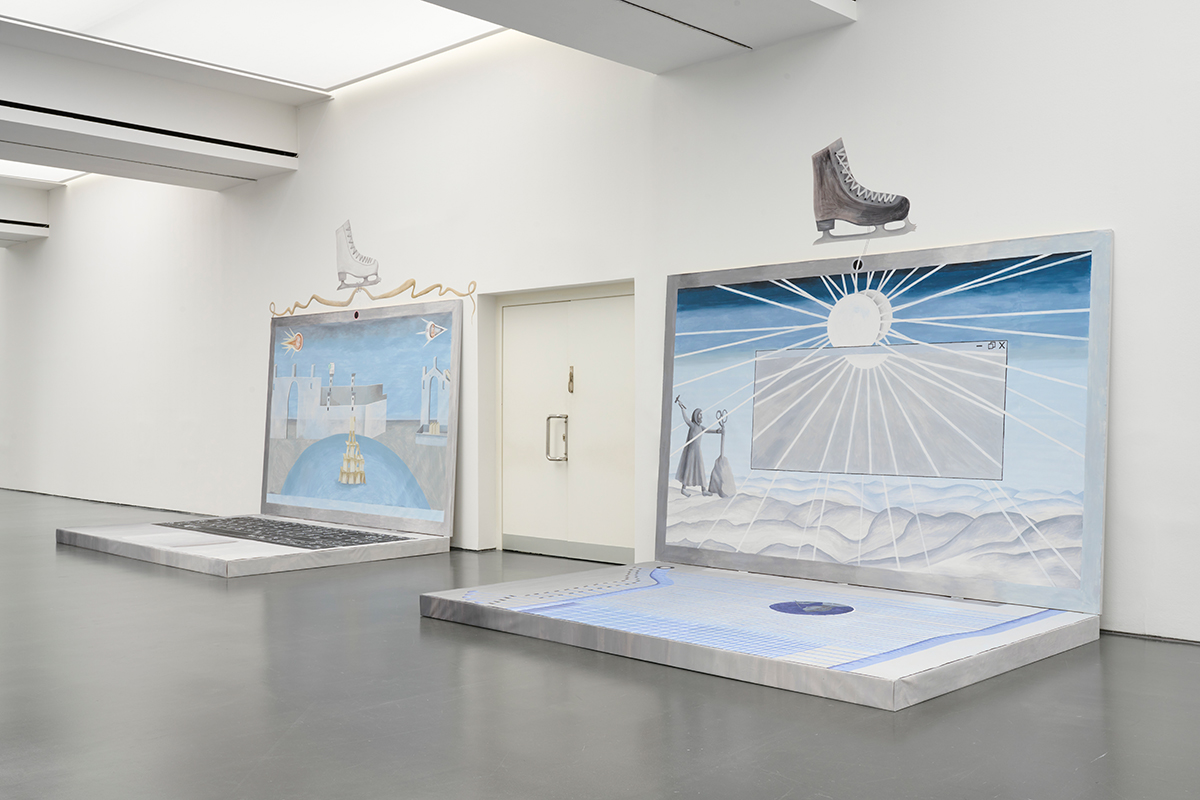 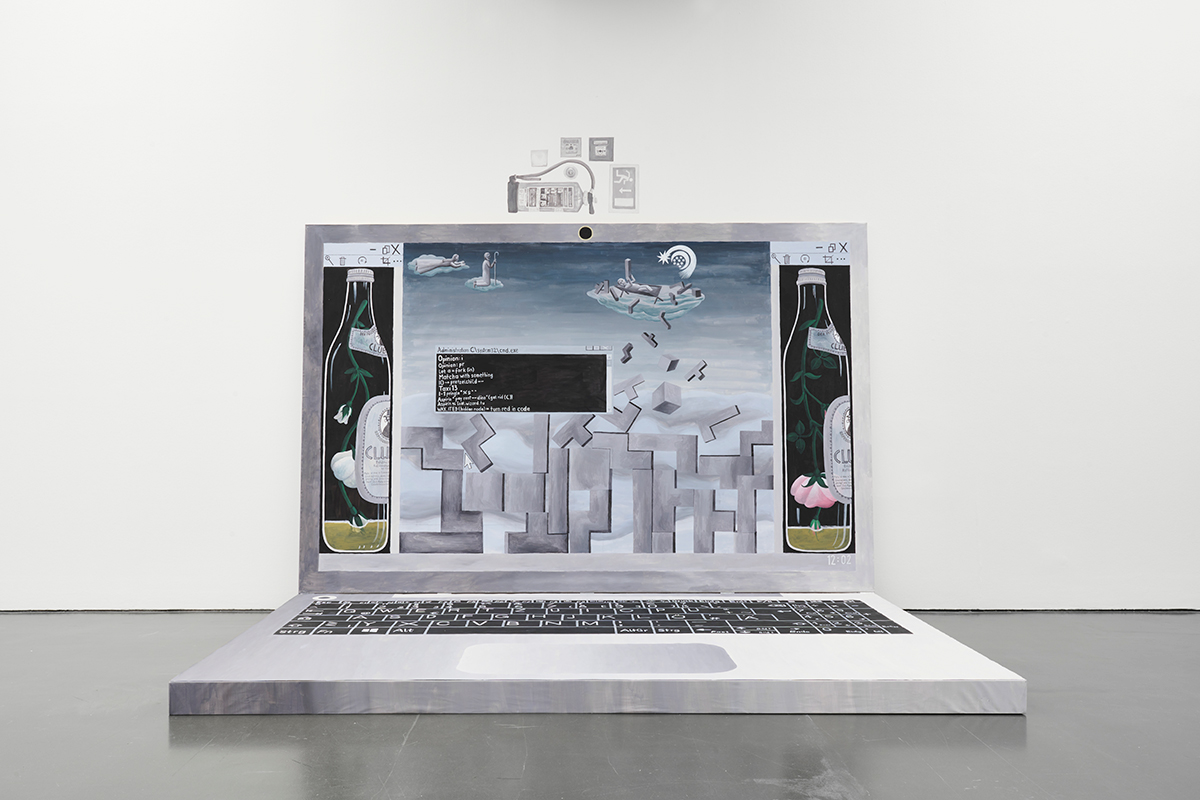 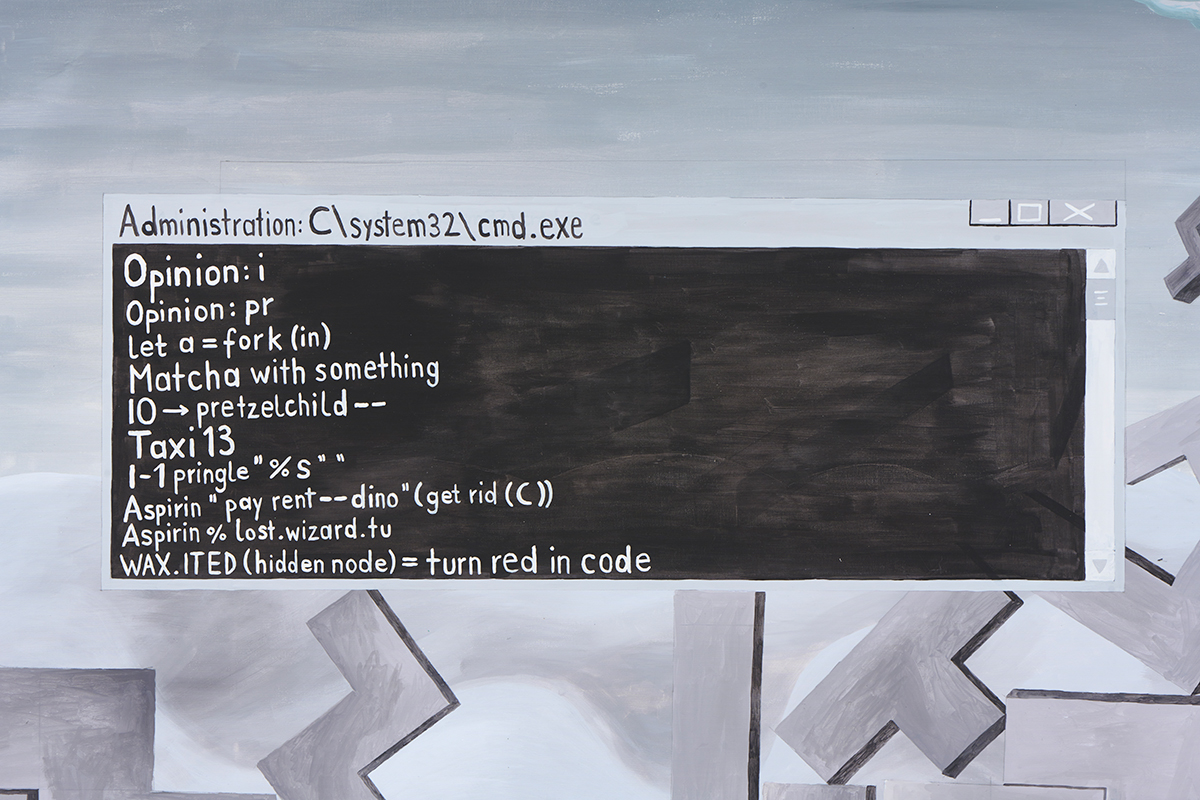 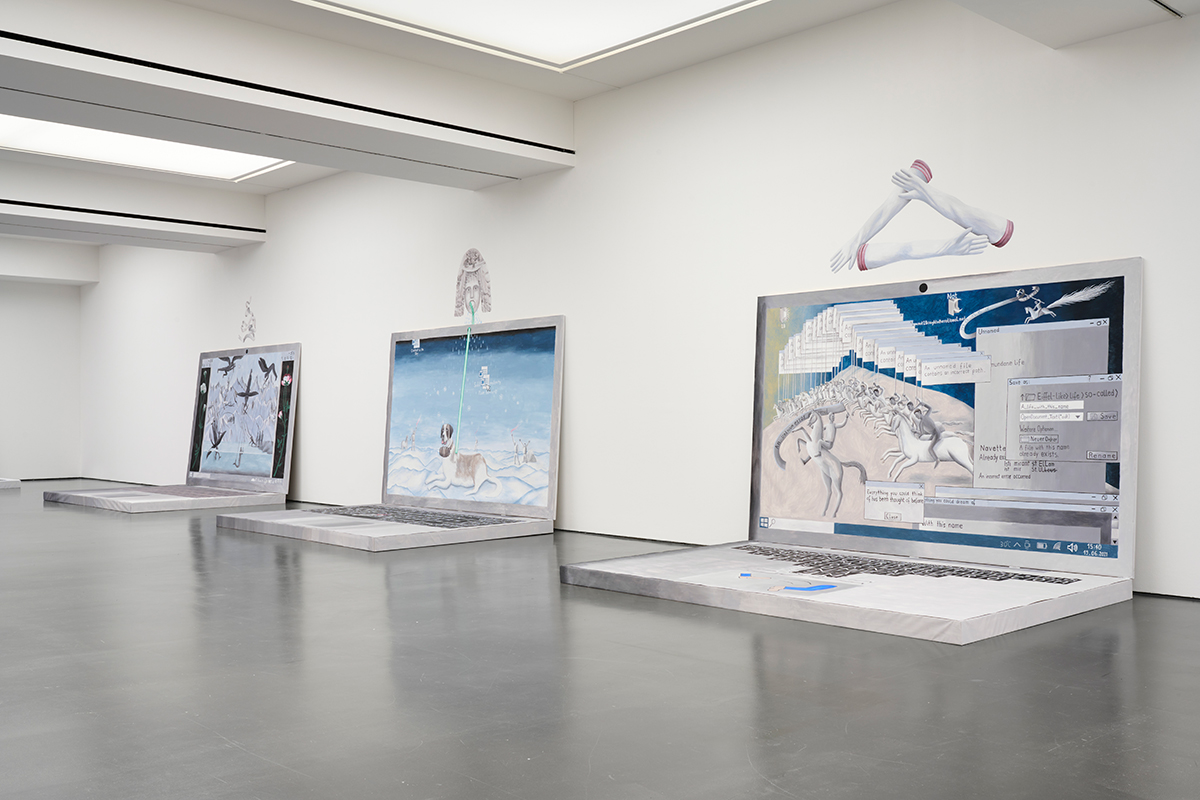 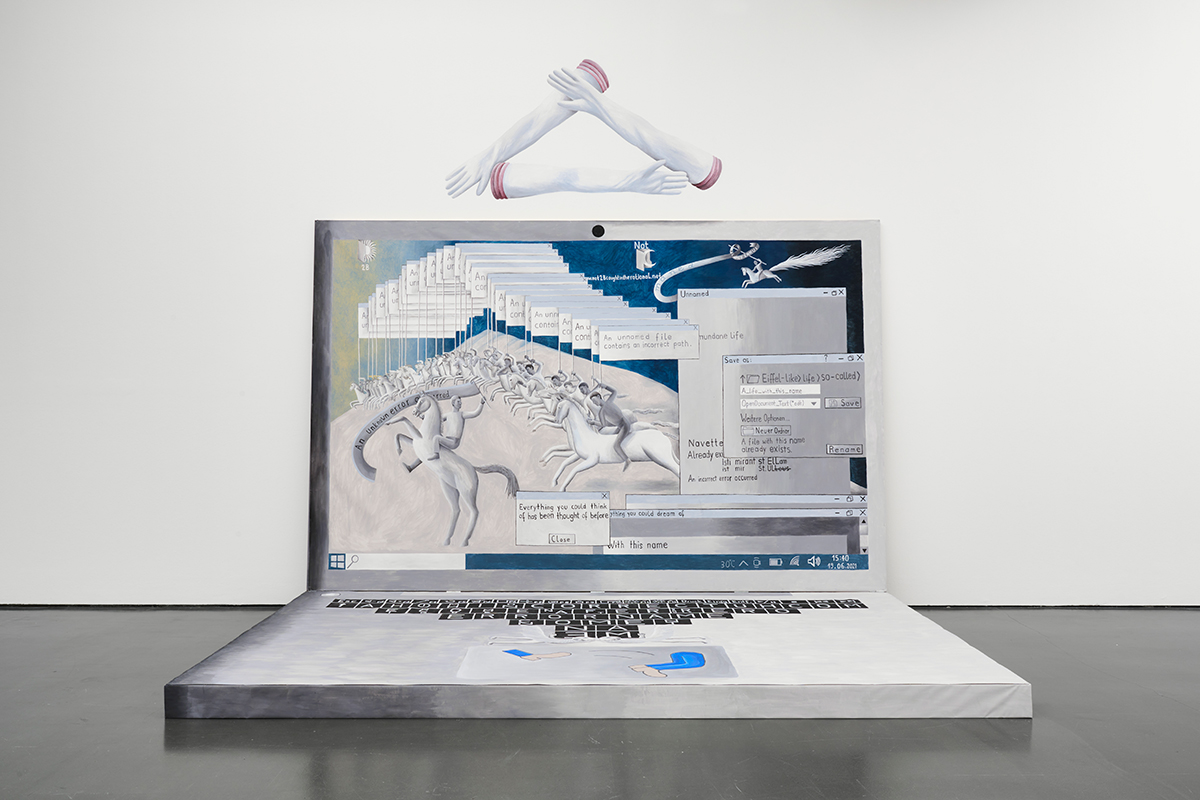 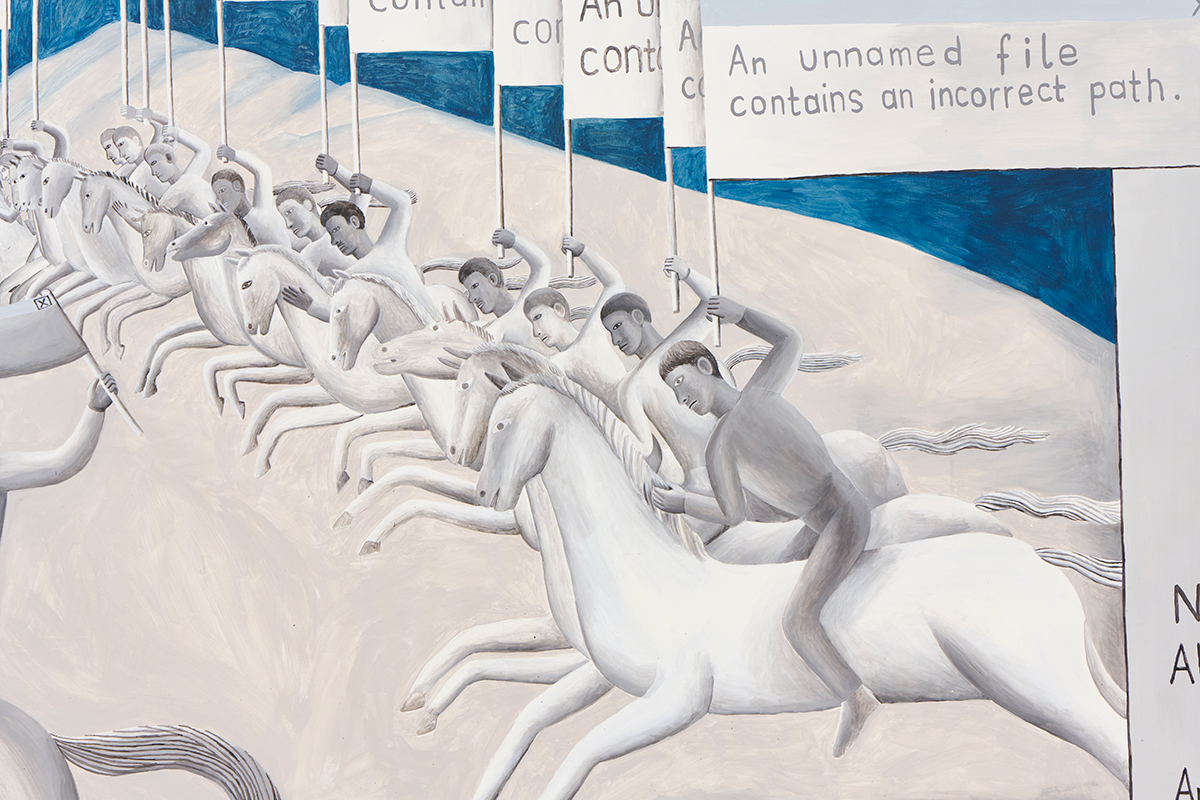 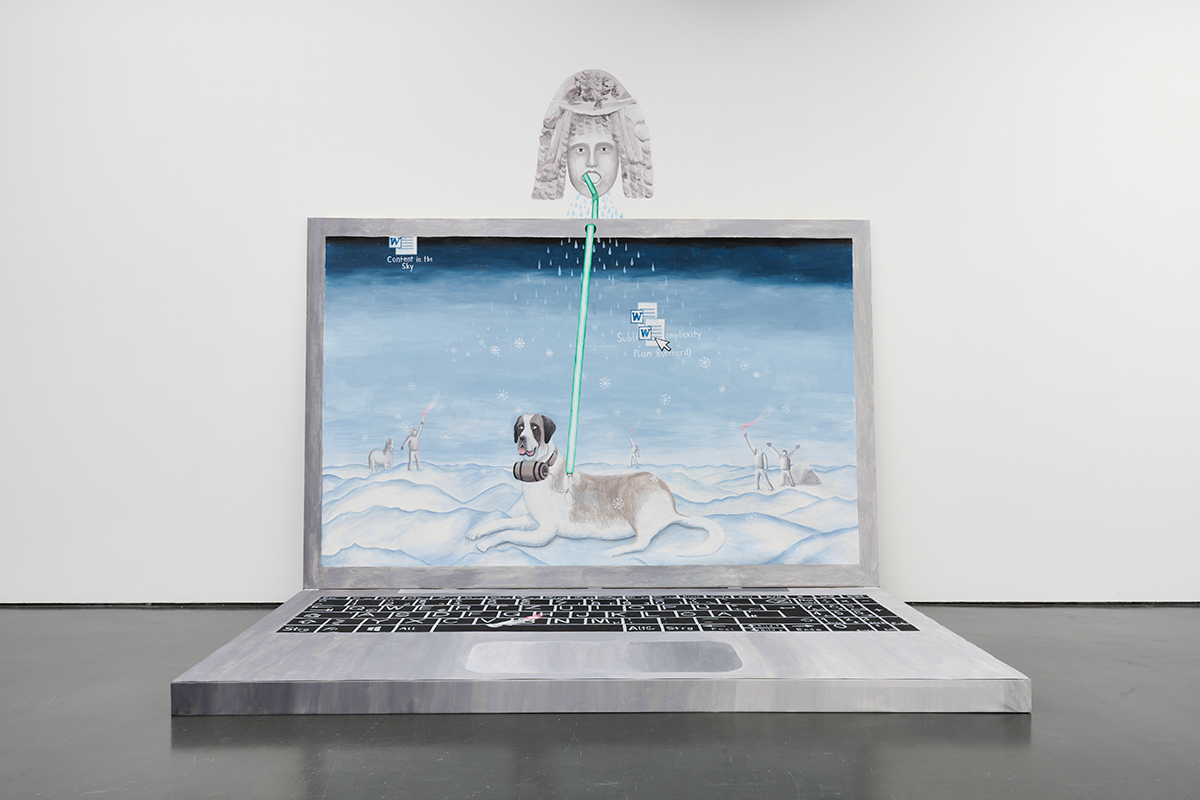 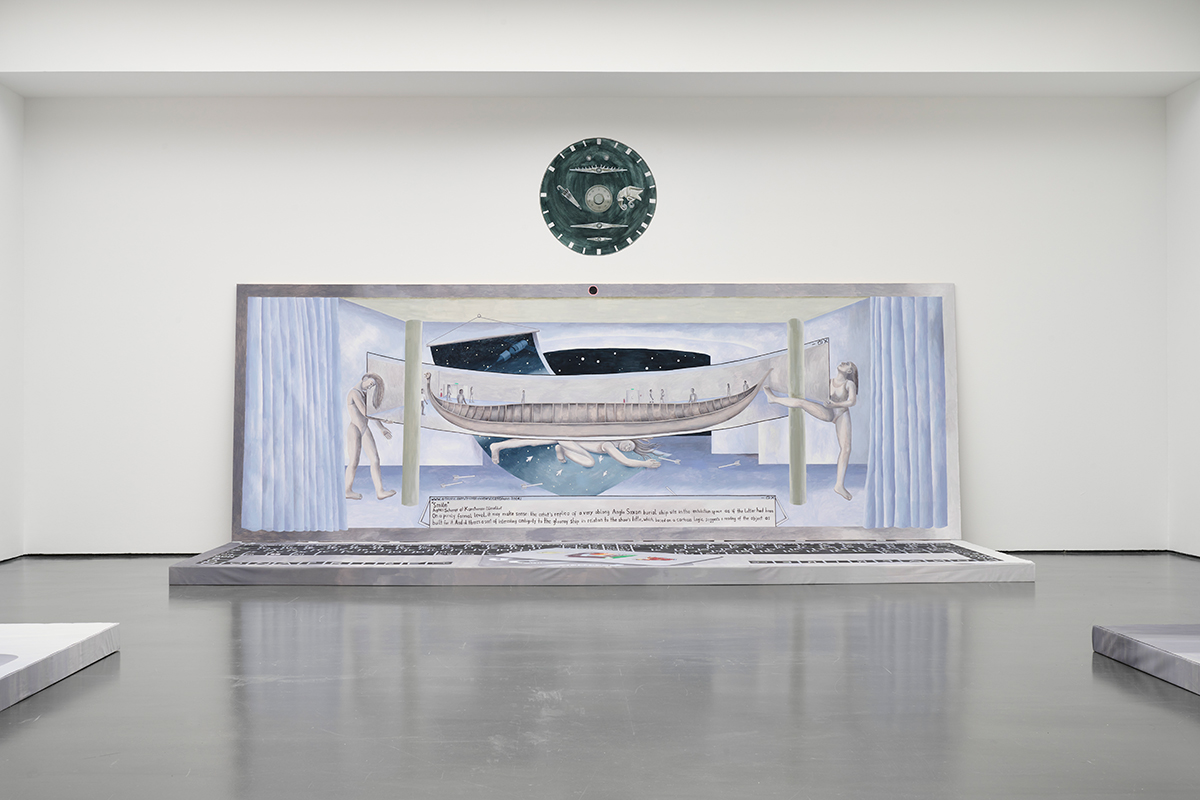