ChertLüdde is pleased to present the first solo exhibition by Agens Scherer with the gallery.

Titled My refuge, my treasure, without body, without measure the exhibition is accompanied by a text by Stanton Taylor.

Agnes Scherer (b. 1985, Germany) lives and works in Berlin. She studied painting at the Kunstakademie in Düsseldorf and is a research assistant of Art History and Art Theory at the Hochschule für Bildende Künste / Städelschule, Frankfurt am Main.

Ancient Egyptian books of the dead often show Anubis weighing the hearts of the deceased against a feather. Anyone too heavy was promptly consumed by Ammit, devourer of souls; those light enough would pass on to the eternal afterlife. Centuries later, the Iliad reports that Zeus twice packed out his scales to weigh deaths, not lives, as he decided the fate of the Trojan War. In medieval christian iconography, it’s usually the Archangel Michael weighing souls against each other. There, those deemed overweight on the day of judgment are lowered into the jaws of some little beast. In contrast to the modern ideal where subjects are expected to govern themselves, these images of psychostasis, or the weighing of souls, have historically emphasized a more absolutist view of the world—one where human lives are measured against external standards, far beyond individual interpretation or control.

Fast forward to 21st-century Berlin, and the world conjured in Agnes Scherer’s My refuge, my treasure, without body, without measure sees people as piggy banks held in the balance by opportunistic candy counters, eagerly awaiting the moment when one of their sweet little assets can be cracked open and liquidated. The pale cast of characters that populate her architectural paintings and plaster sculptures are all conceived as containers, carriers of some exchangeable value. Egg-like, their fragile forms always point to a future crack up—from within or without—on the way to becoming something else. This iconographic labyrinth underpinning Scherer’s work is filtered through the diagrammatic vernacular of comic illustration and folk sculpture then laced with cloying colors. But despite their upbeat tone, the works insistently point to the same sombre horizon: the final day of judgement, or even redemption, inevitably imposed from the outside; the threshold between one world and the next.

Upon entering the first room, for example, the paintings Small Psychostasis with Desert Background and Small Psychostasis with Lake Background installed in a decorative frieze above the doorframe evoke the architectural motif of the tympanum, which typically marks the threshold to religious spaces throughout the world. Up the stairs, the sculpture Bonbonnière offers an eggly homage to princess Margaret Theresa of Spain, who was immortalized in Velázquez’ paintings and murdered by perpetual pregnancy at the age of 21. In the basement, the freestanding screen combines the diptych paintings Large Psychostasis with Banderoles and Bonbonnière (Wholeness Is Halfness That Is Dreaming), the latter of which seems to be a self-portrait. There, one sees the artist in a Margarita style dress, seams bursting with candy. On her eyes lie two coins—a reference to the ancient practice of putting coins on dead people’s eyes to pay their passage to the underworld, but also to more banal motivations. The last room, accessible by the basement ladder, presents the ensemble My Refuge, My Treasure. There, judgement has finally been cast and the candies must be counted, meanwhile the forms of the damned are lifted from the ash mummies of Pompeii.

Moving through the exhibition, one almost has the feeling of being immersed in the generative logic of a novel or video game. Scherer herself distrusts the idea of worldbuilding being used to describe her work, since it opens the door for dismissing a woman’s vision of the world as *merely* speculative or fantastical. Indeed, her staging of the artist as both victim and mercenary in a system of financial speculation is all too real, nor could the show’s fundamental vibe of waiting for the end be any more topical. On the other hand, the seemingly simplistic but symbolically overburdened imagery can feel frustrating for the way it refuses to resolve into any single reading. But that, too, is part of the appeal. Once upon a time, Ursula K. Le Guin defended the ambiguities of worldbuilding as such: “All fiction is metaphor … A metaphor for what? If I could have said it non-metaphorically, I would not have written all these words, this novel… and used up my ink and typewriter ribbon in informing me, and you, rather solemnly, that the truth is a matter of the imagination.” 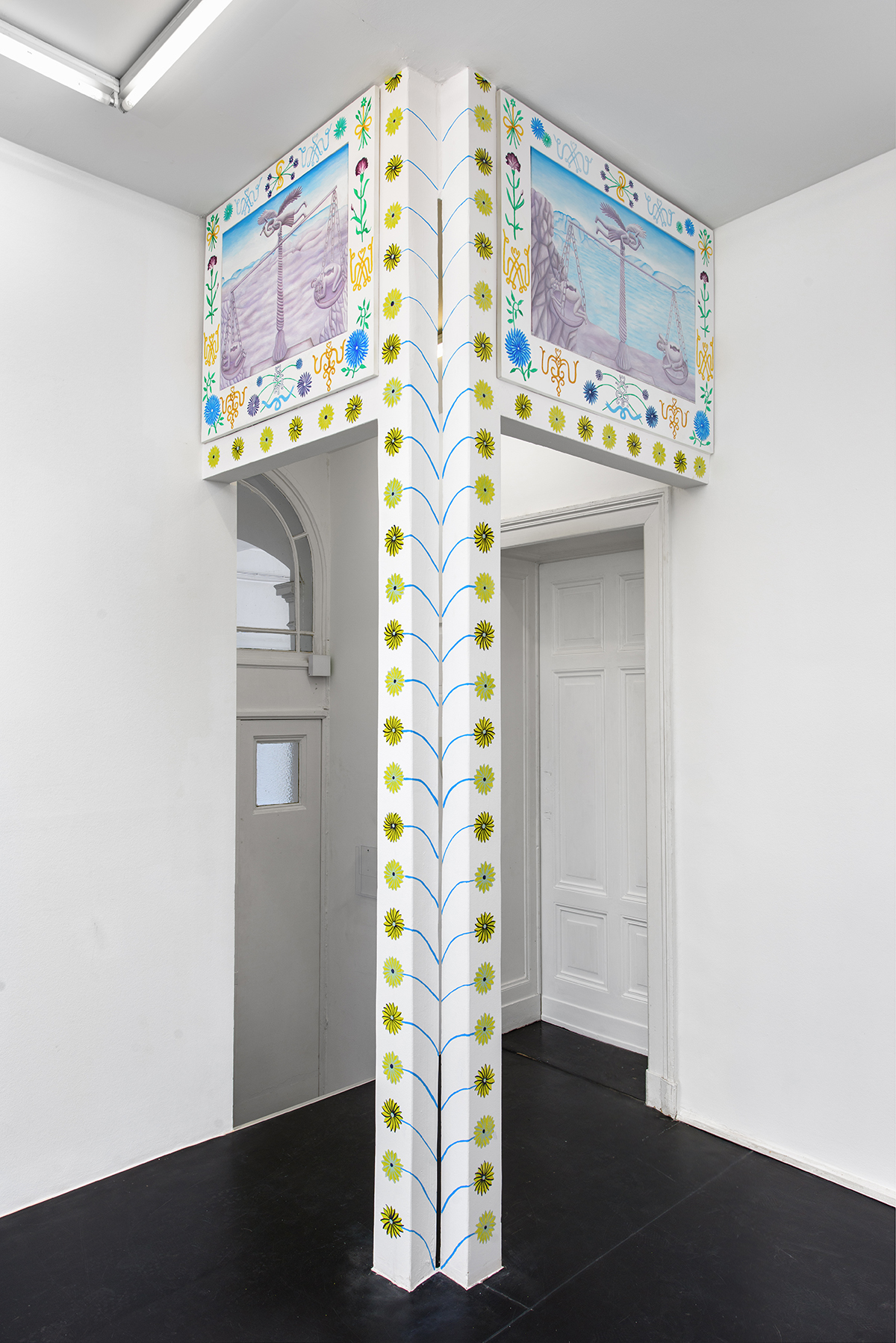 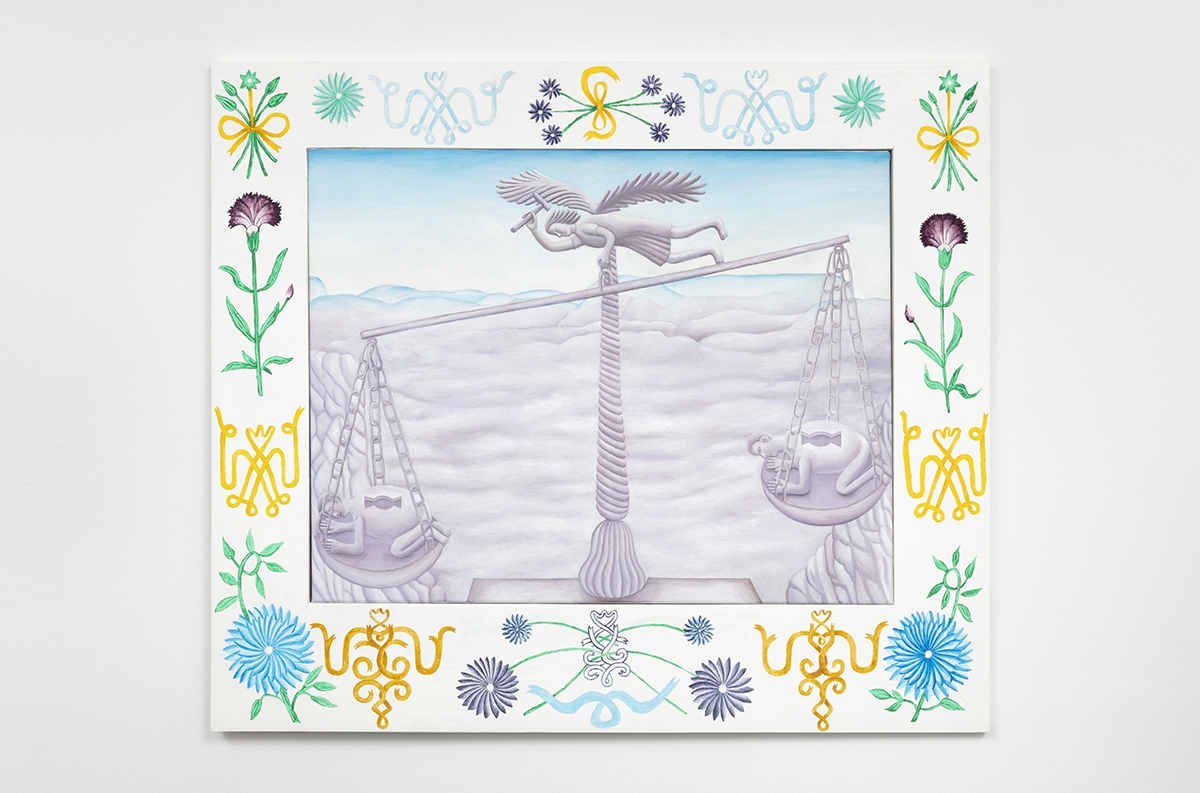 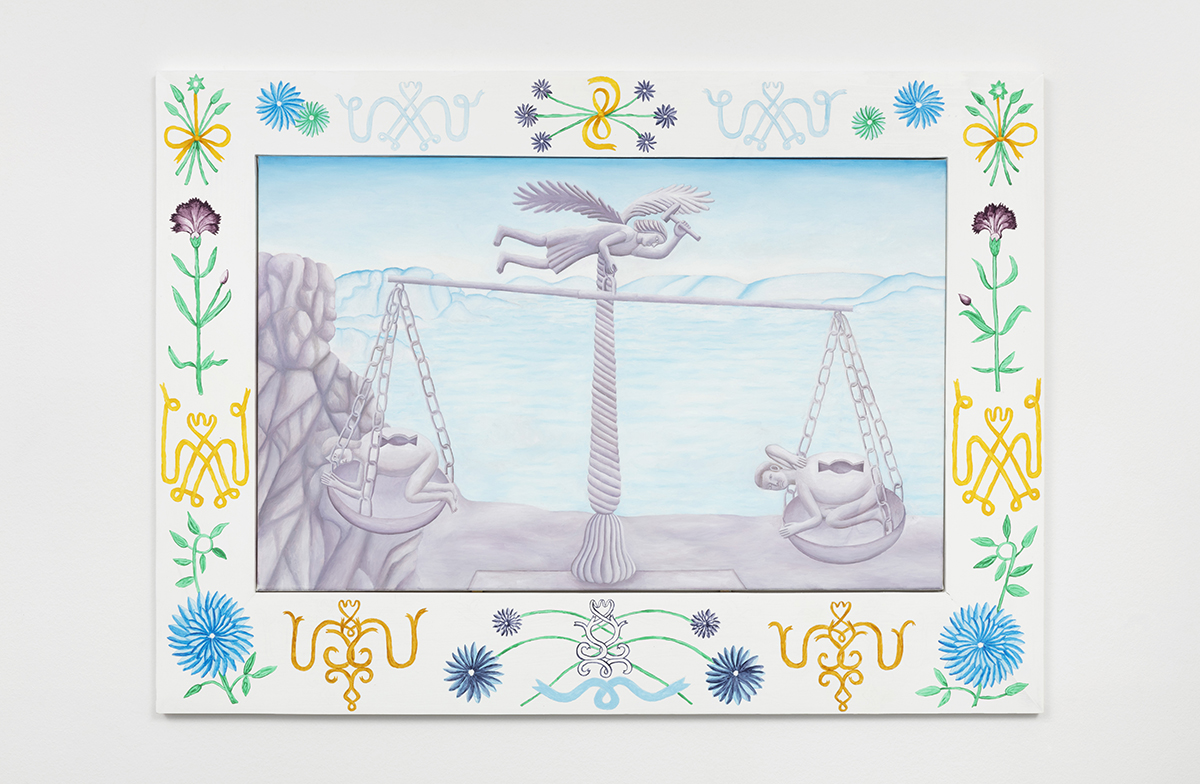 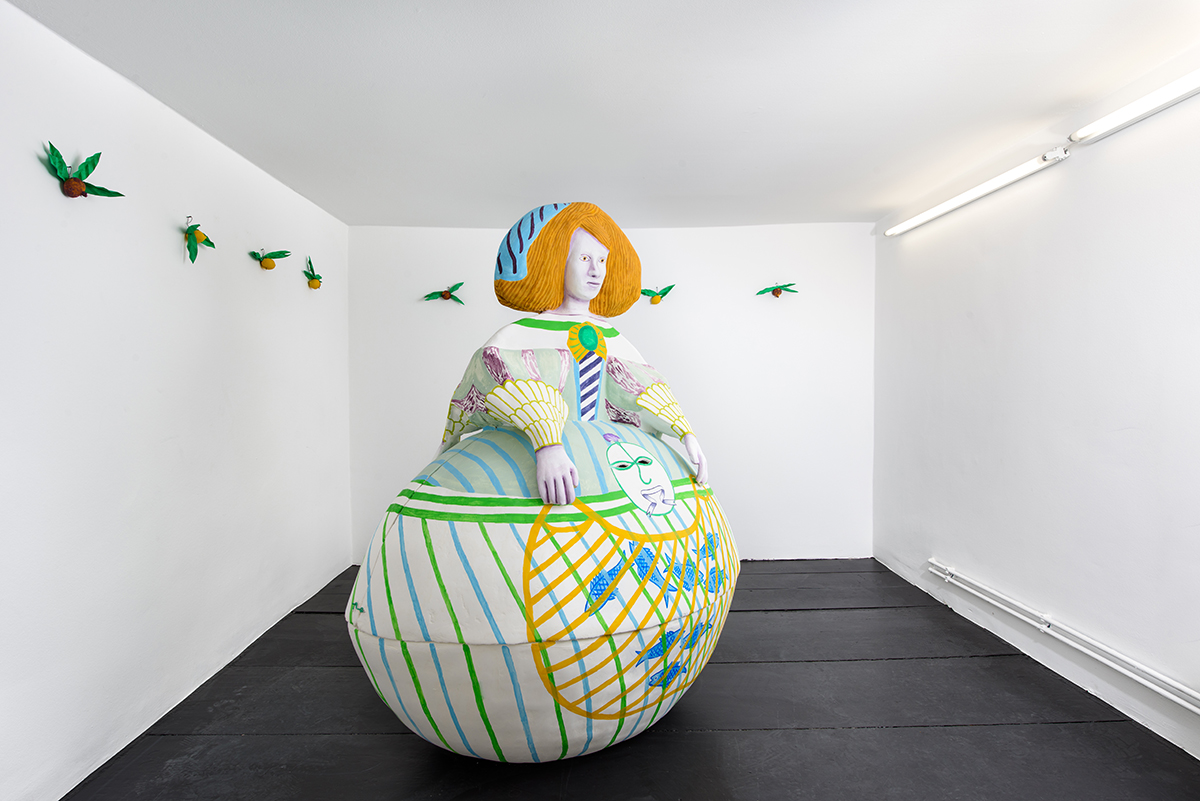 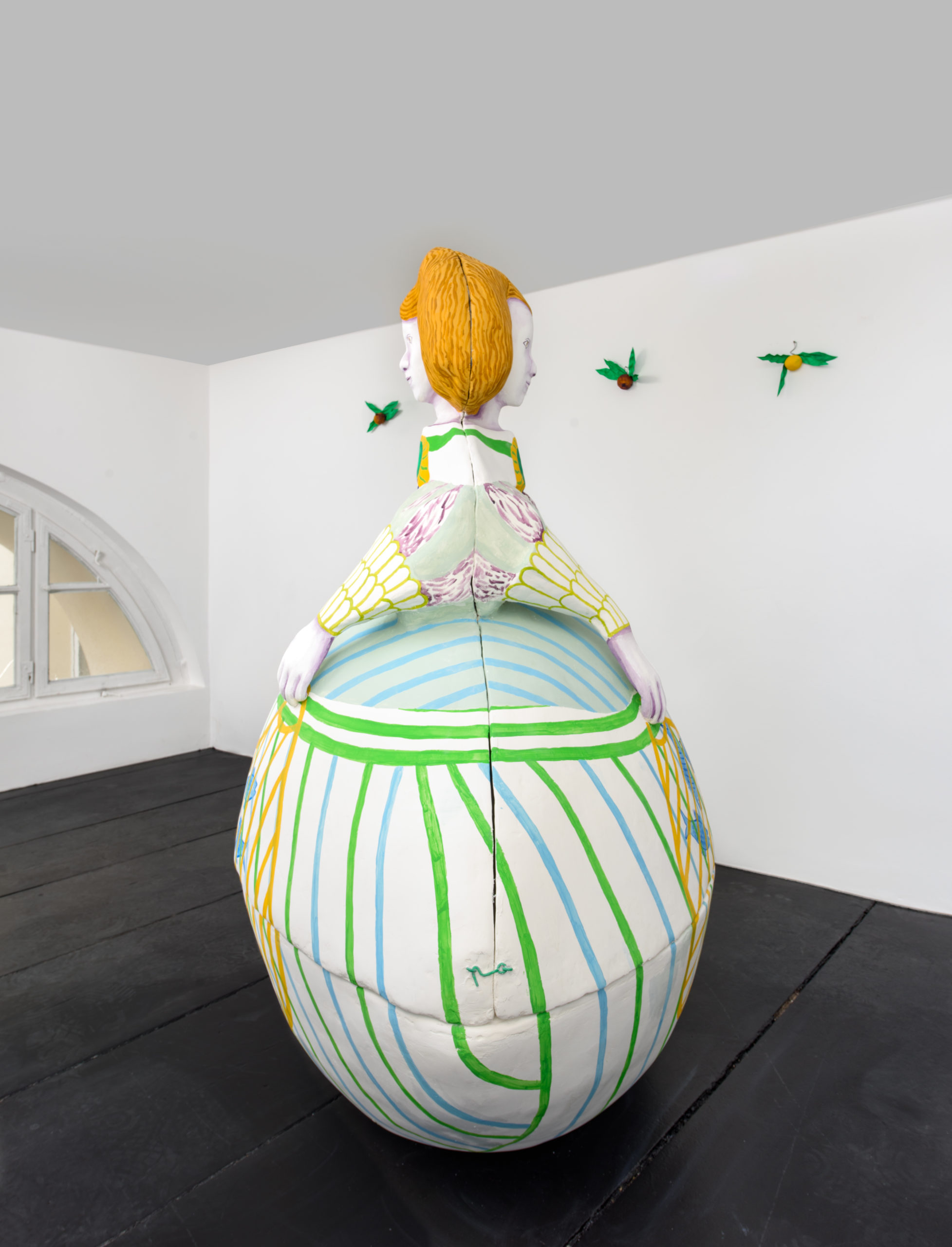 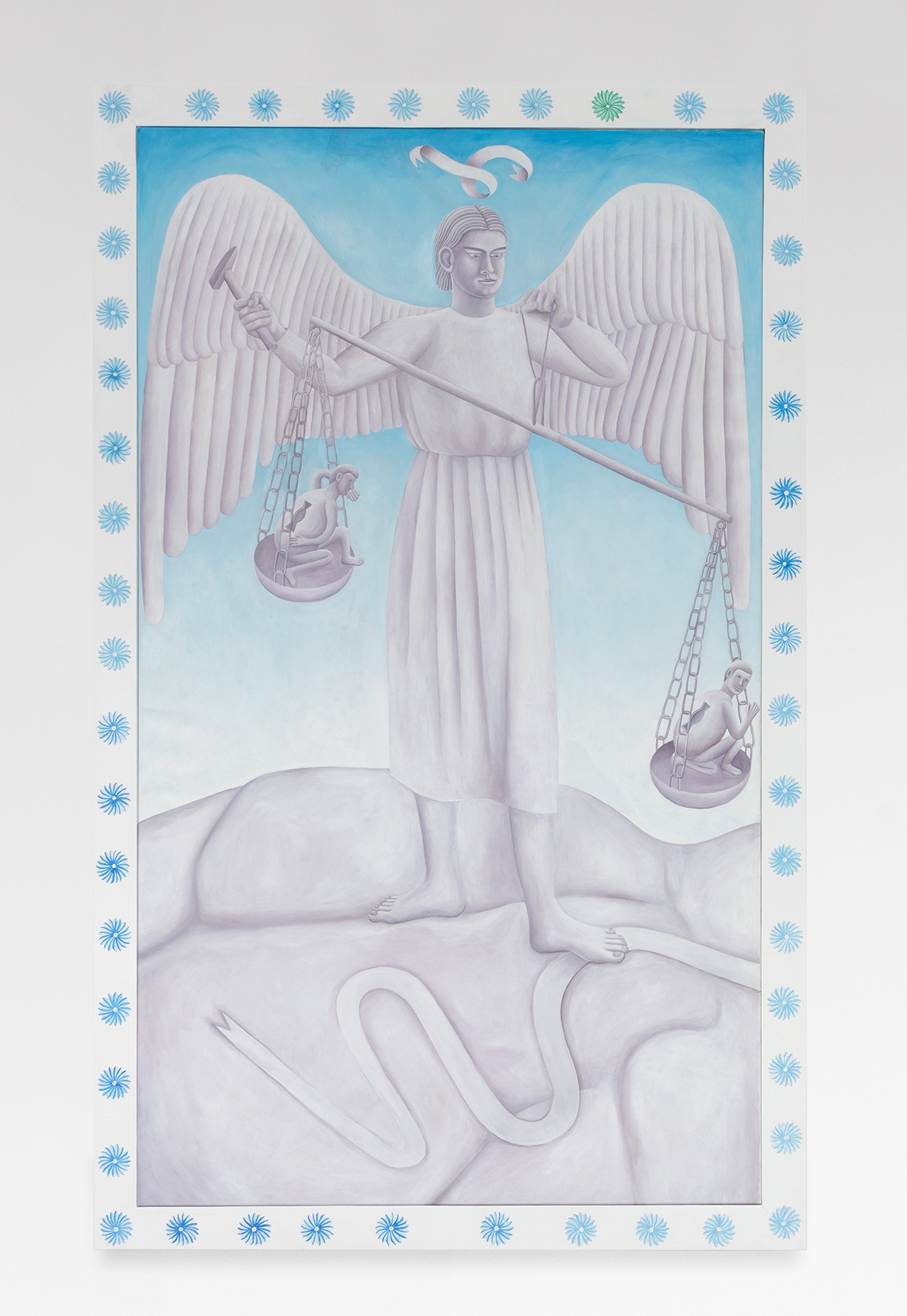 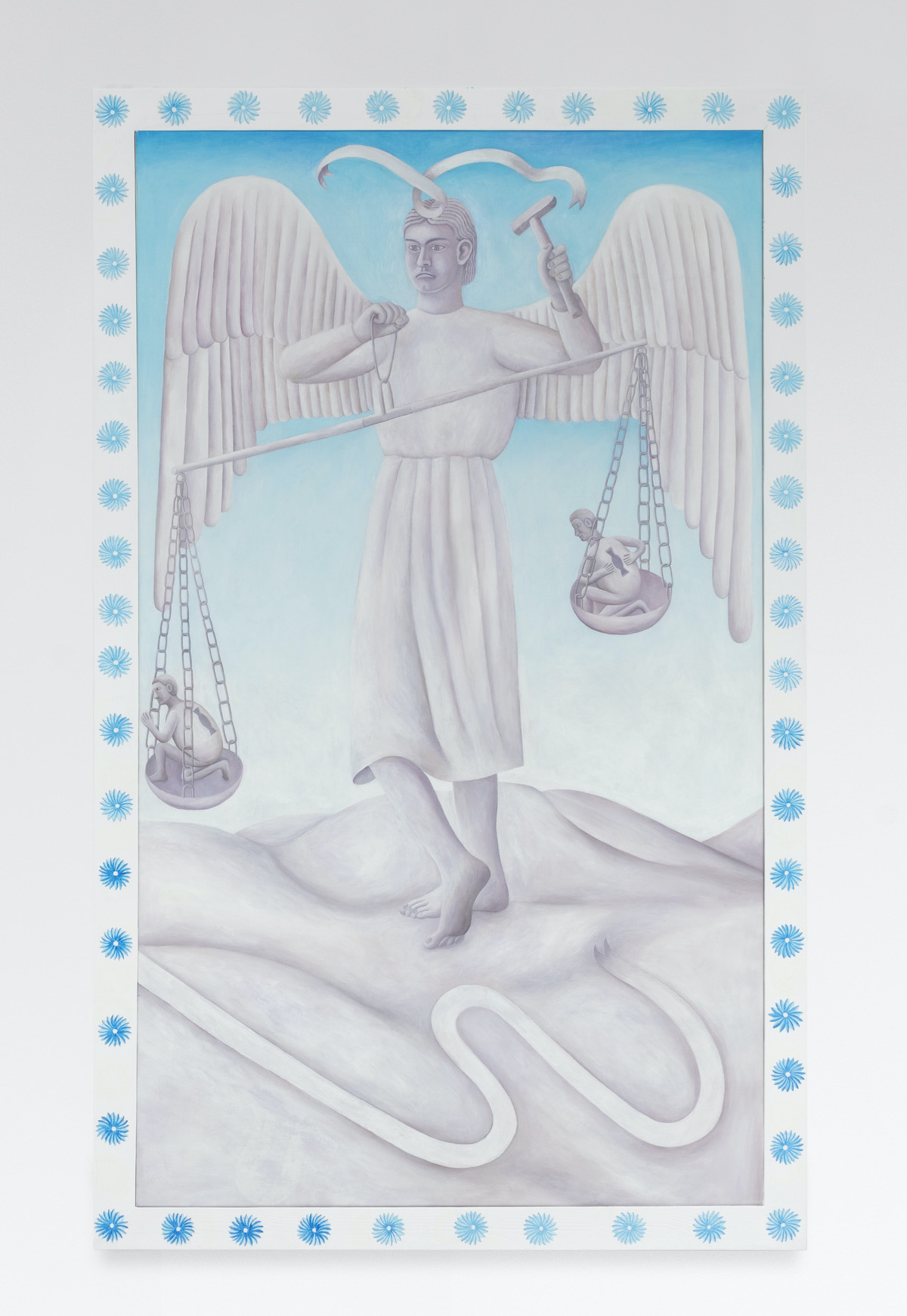 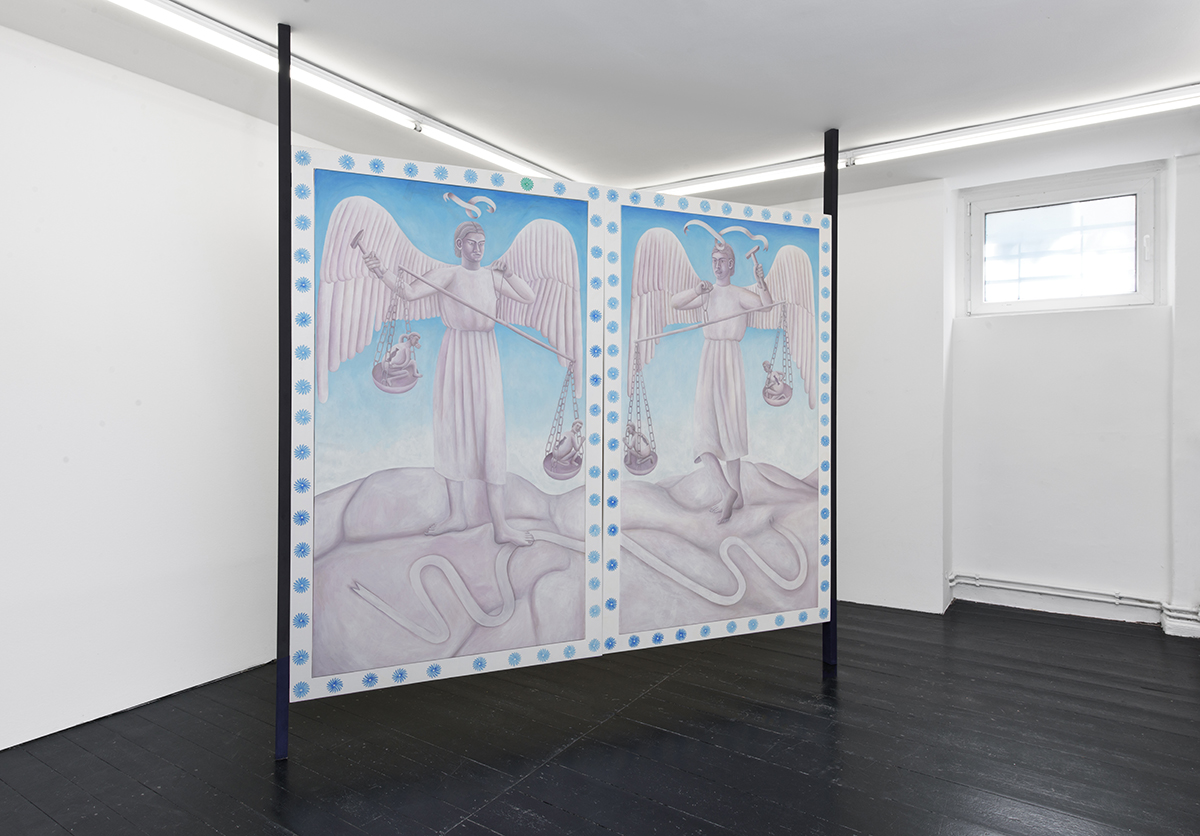 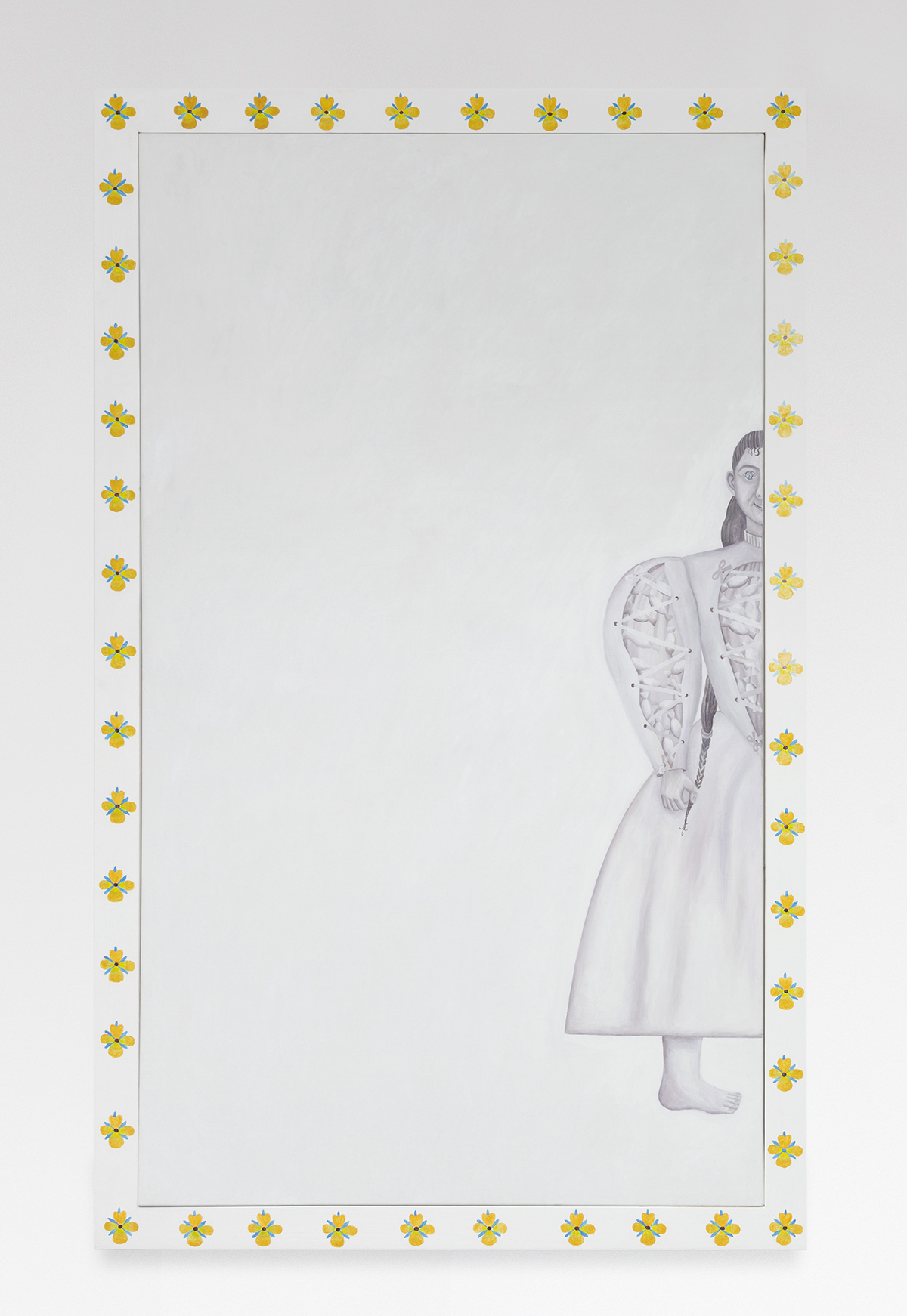 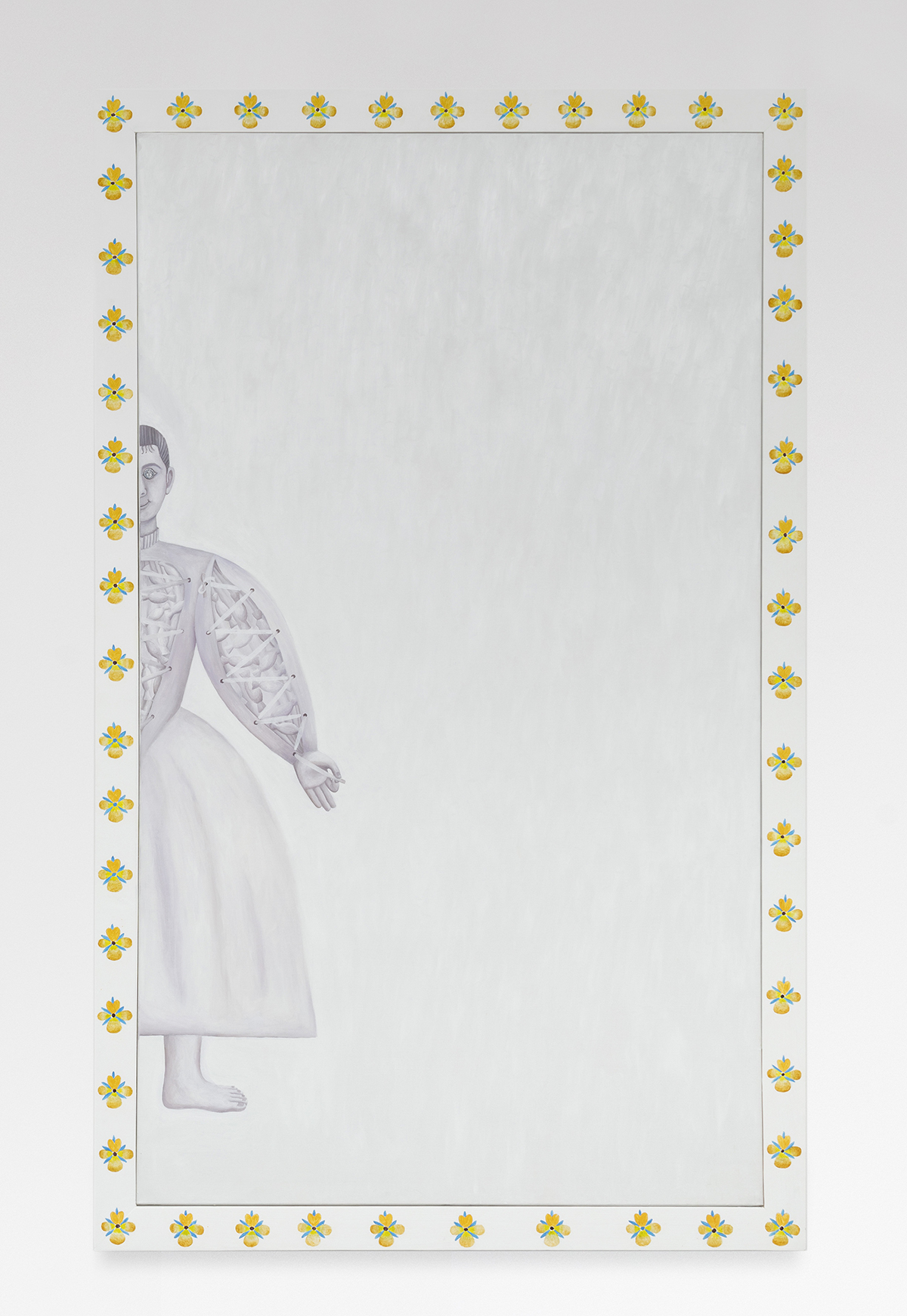 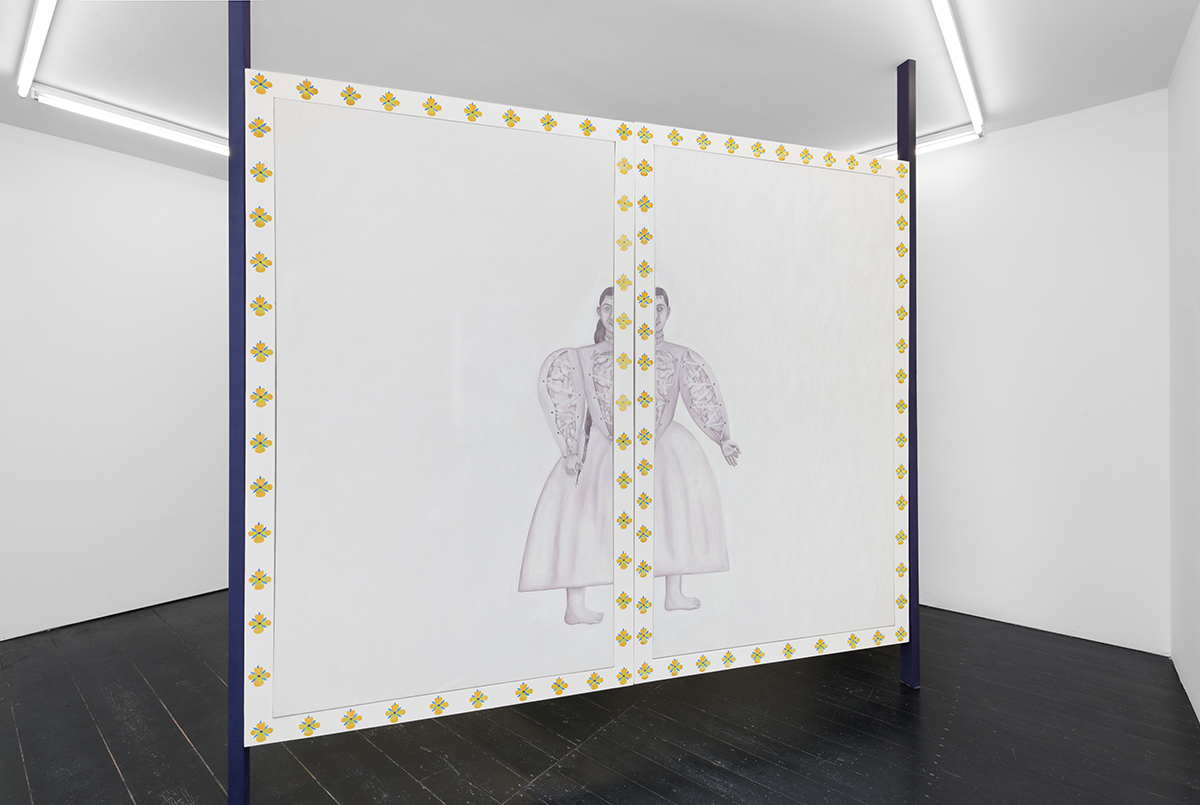 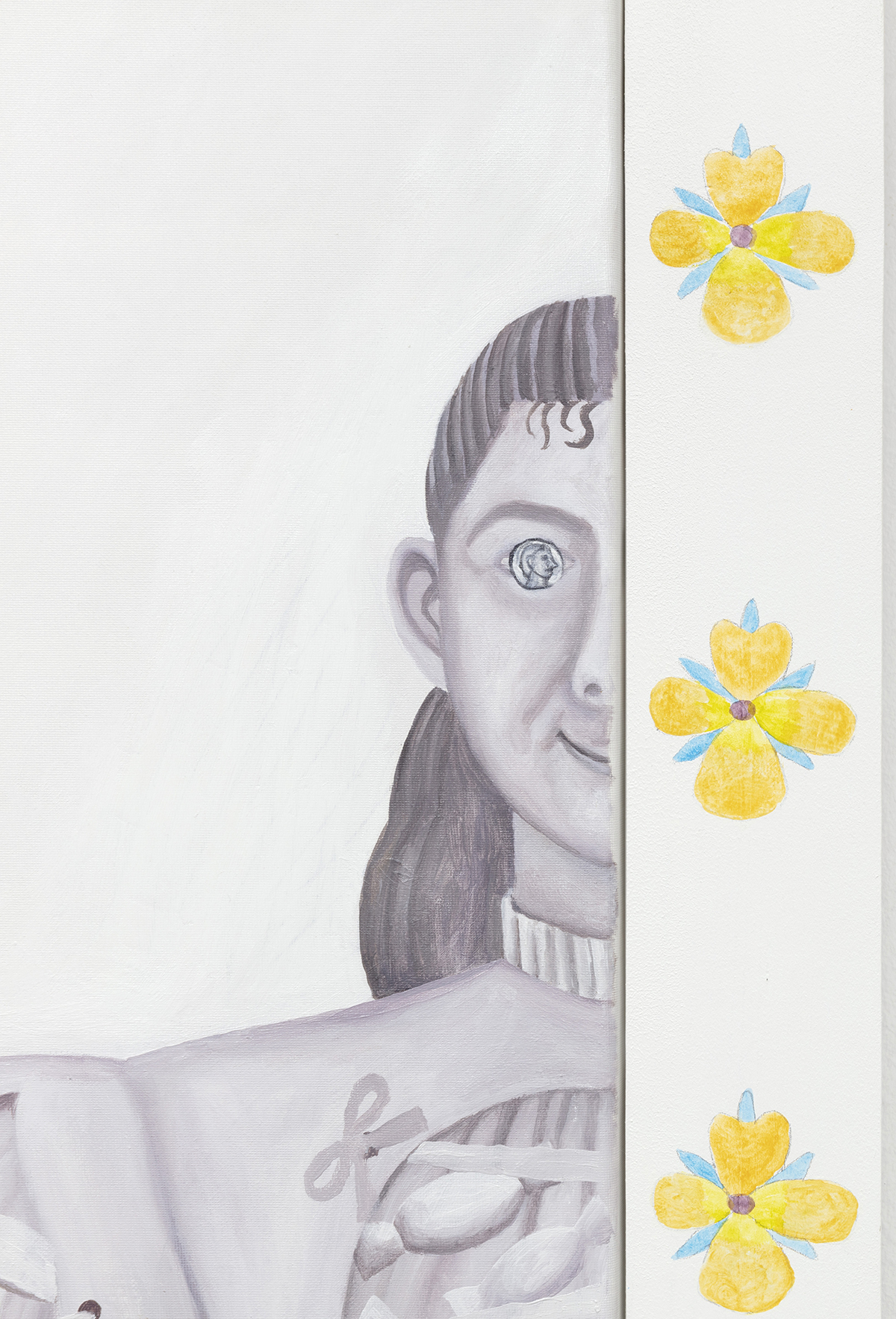 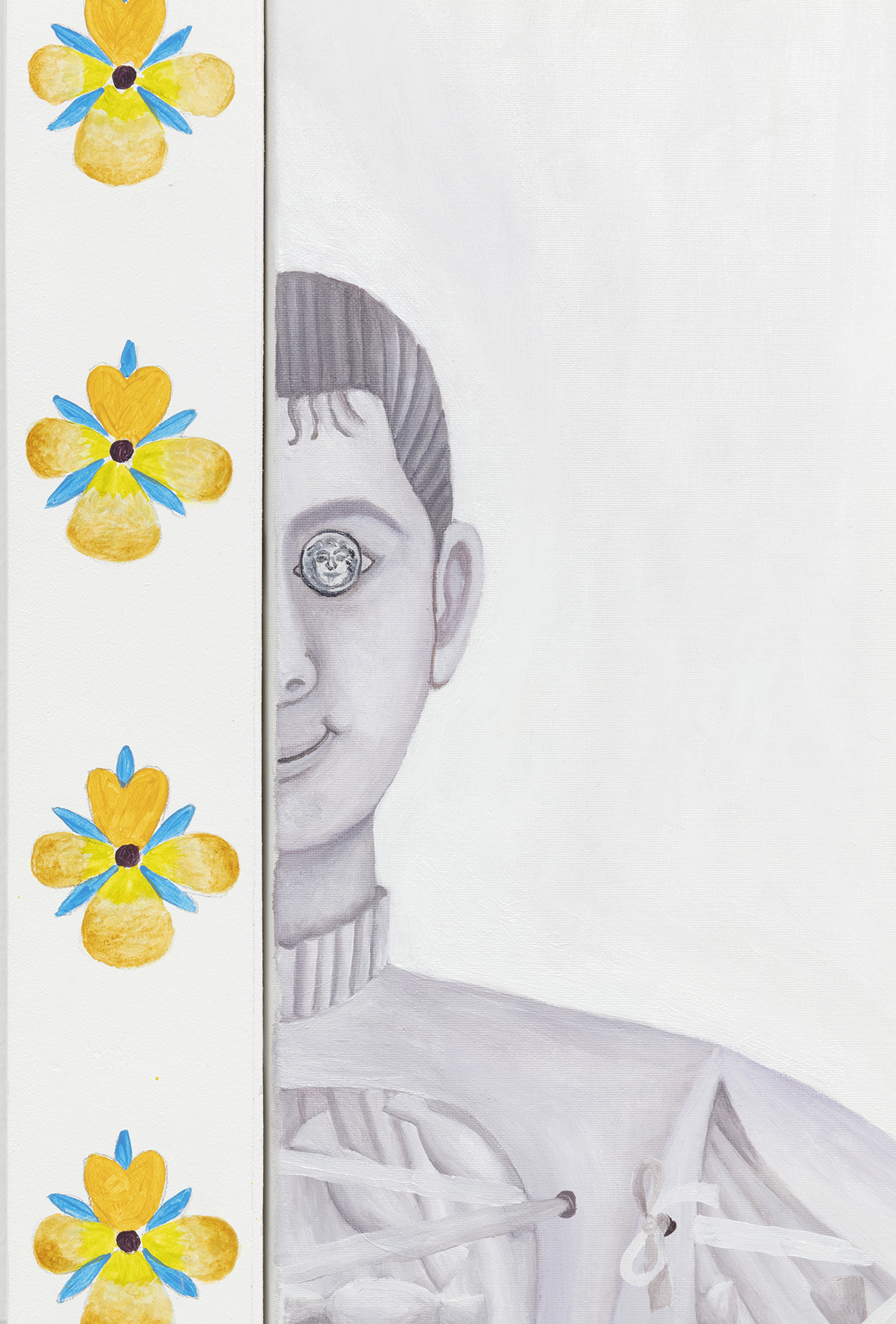 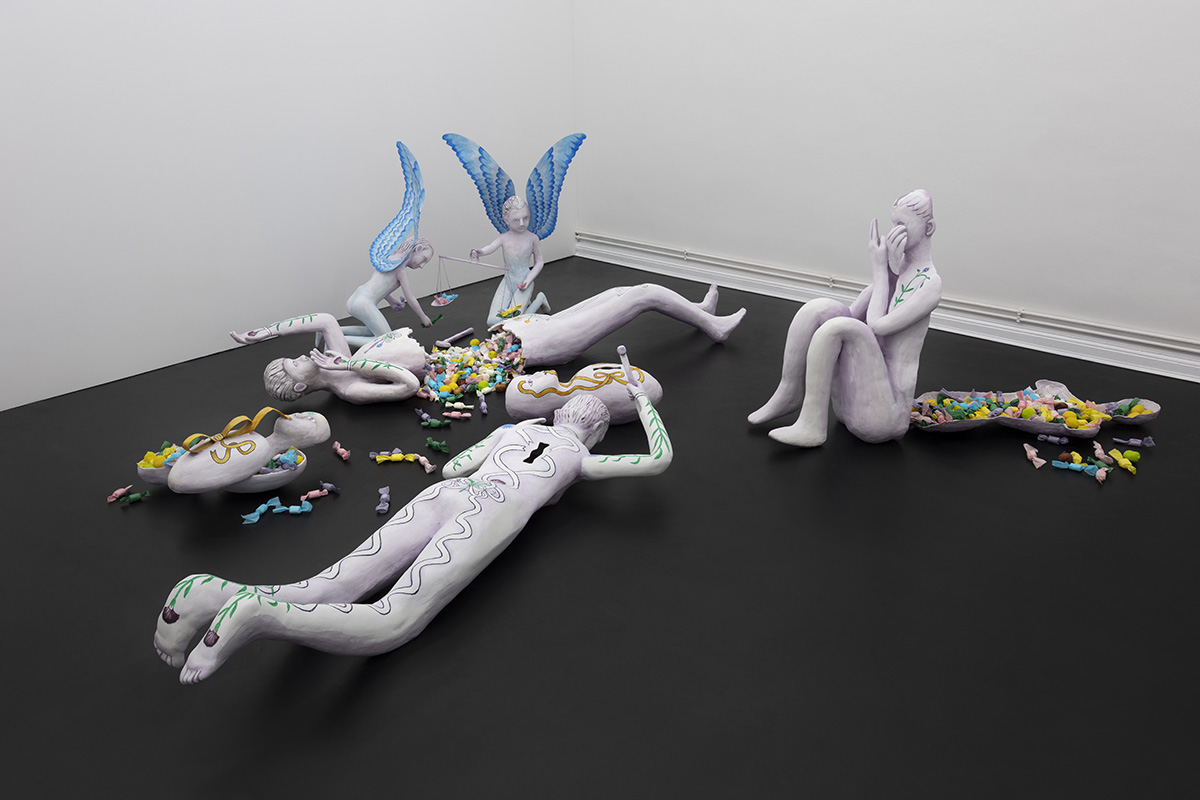 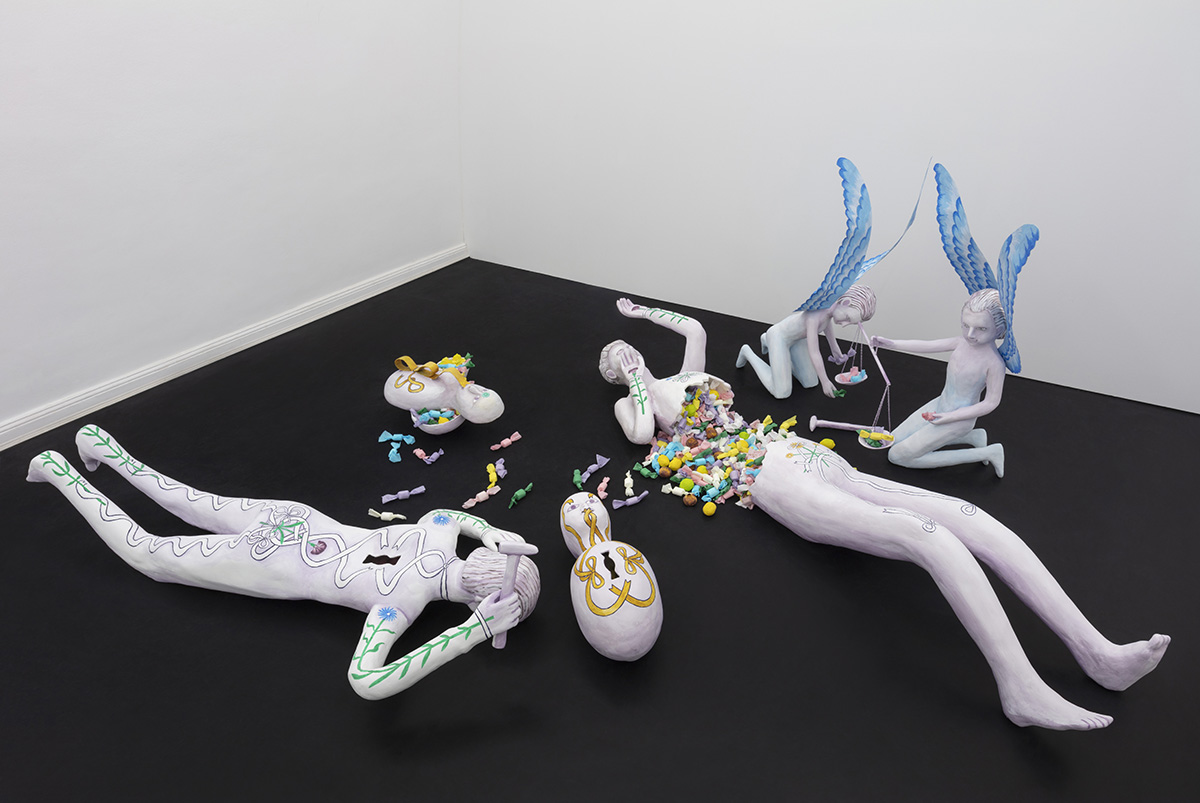 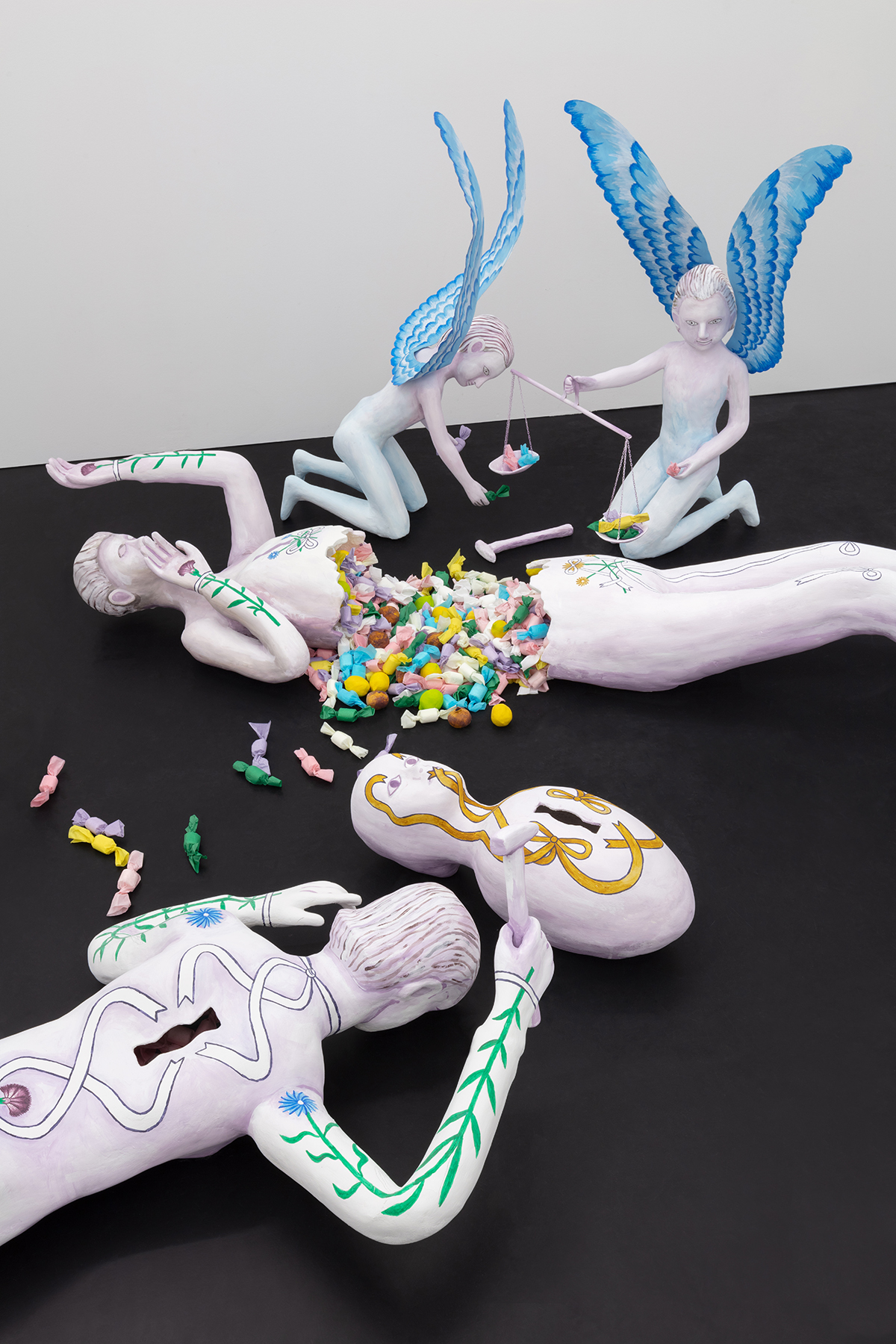 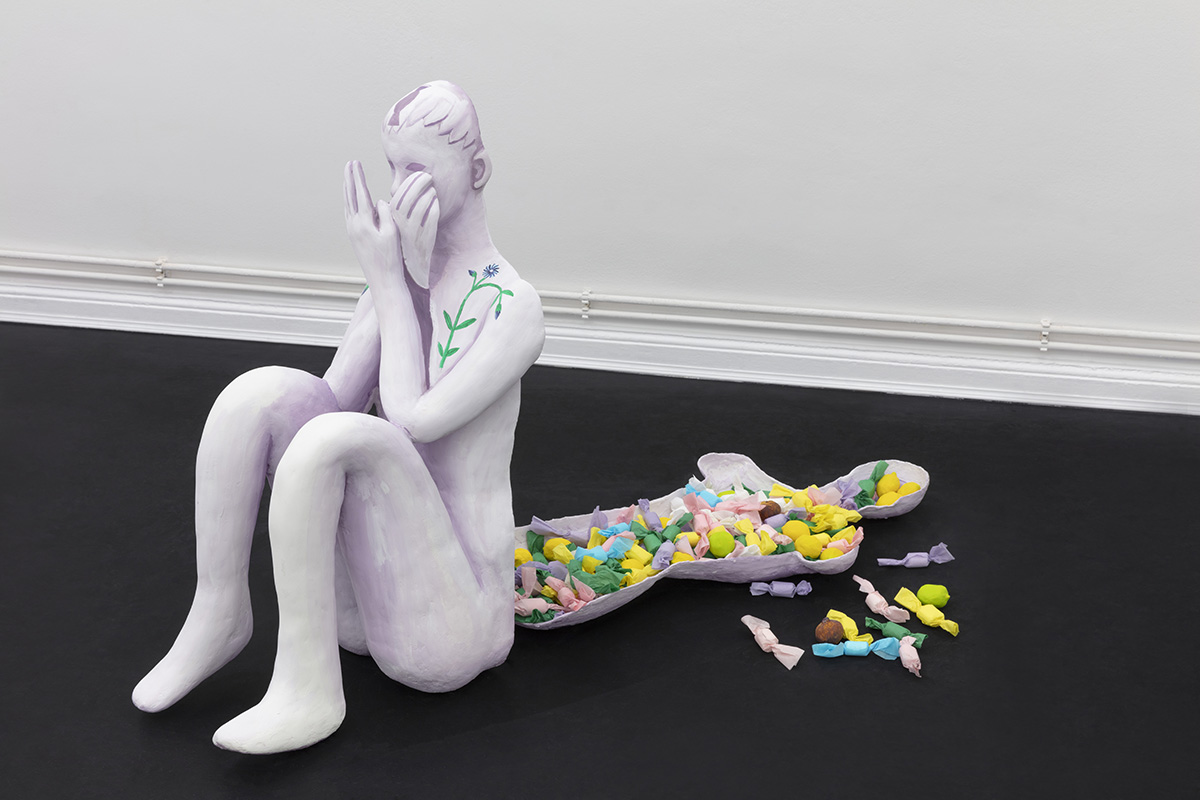 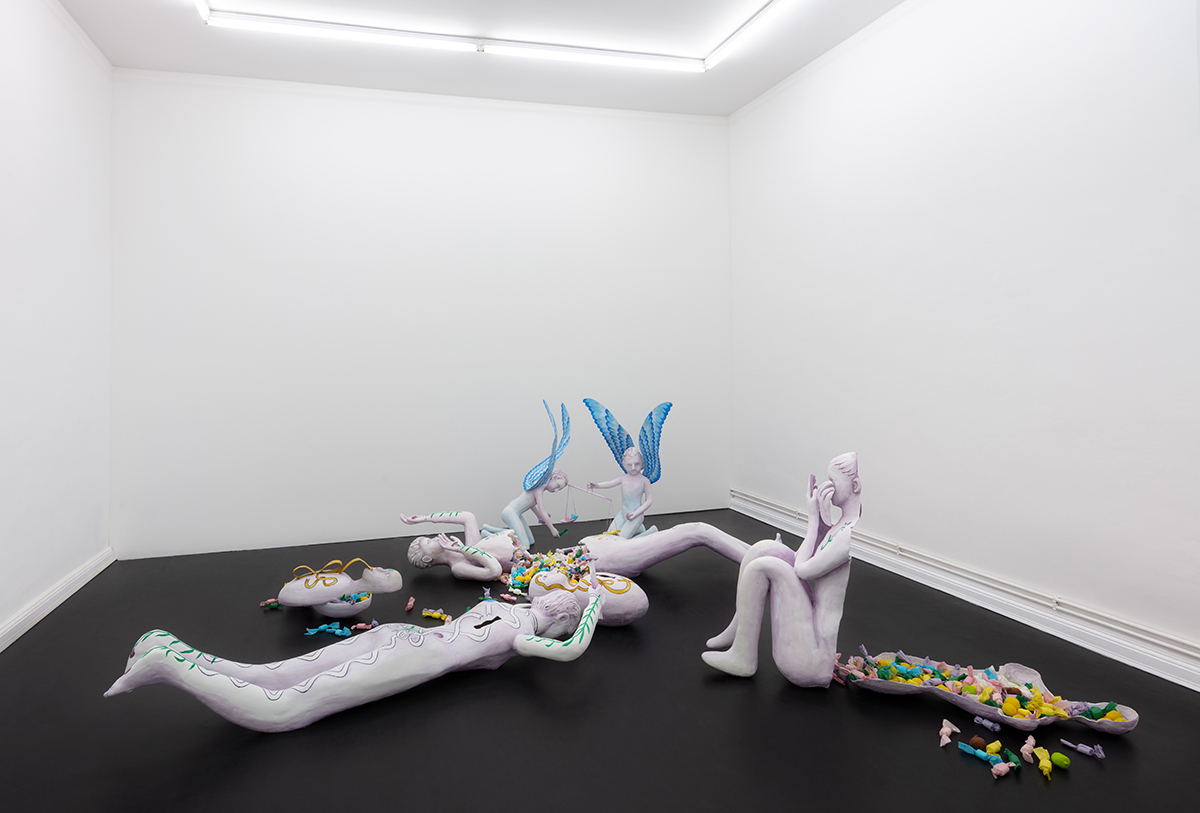 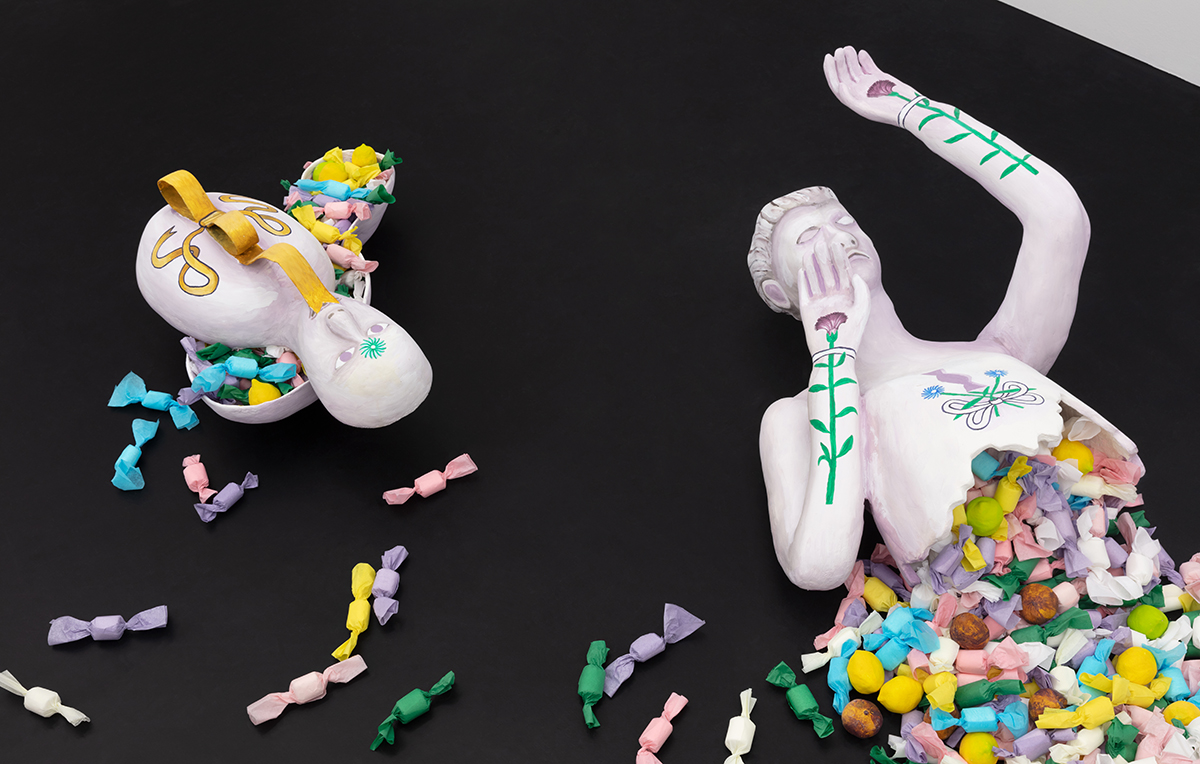 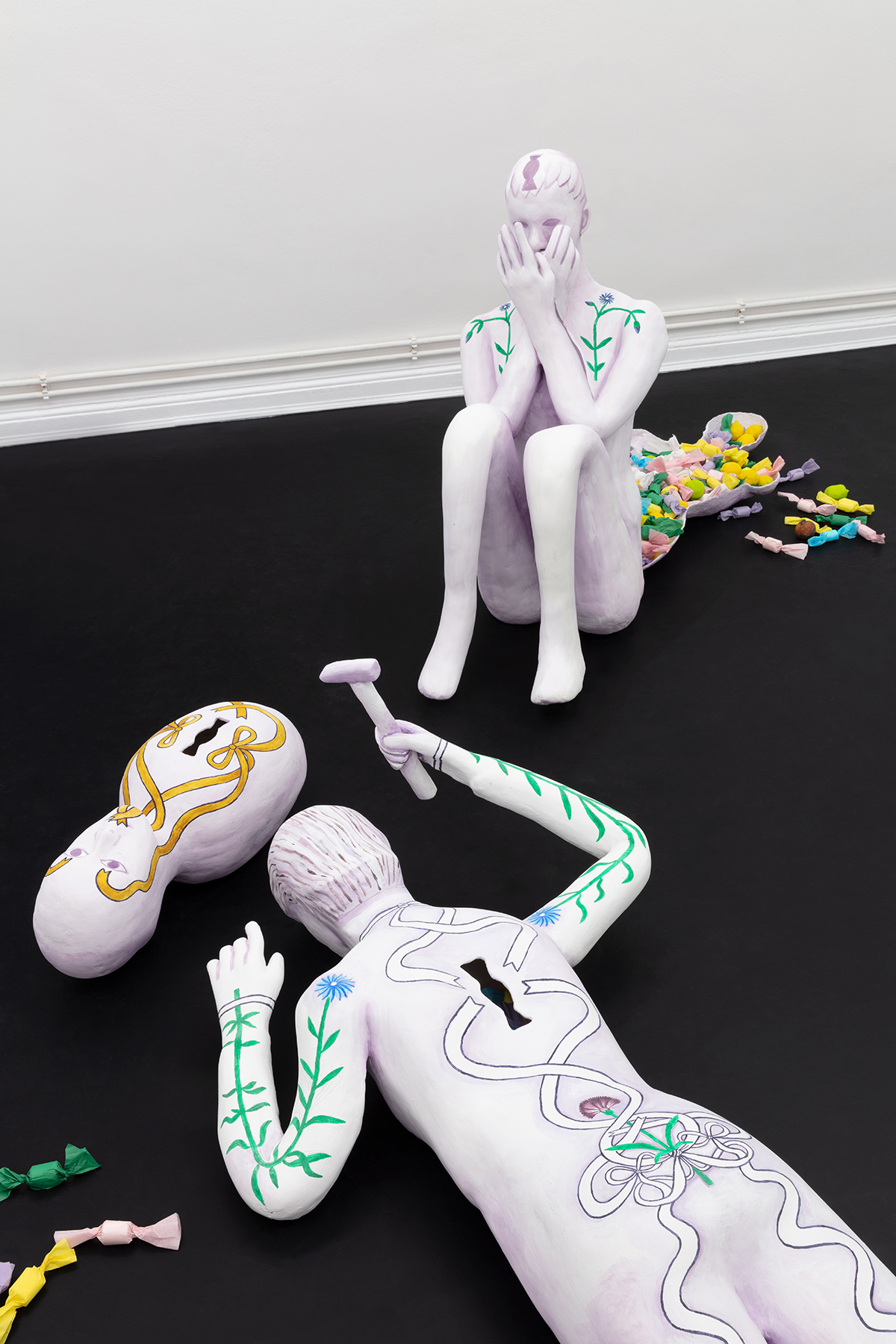 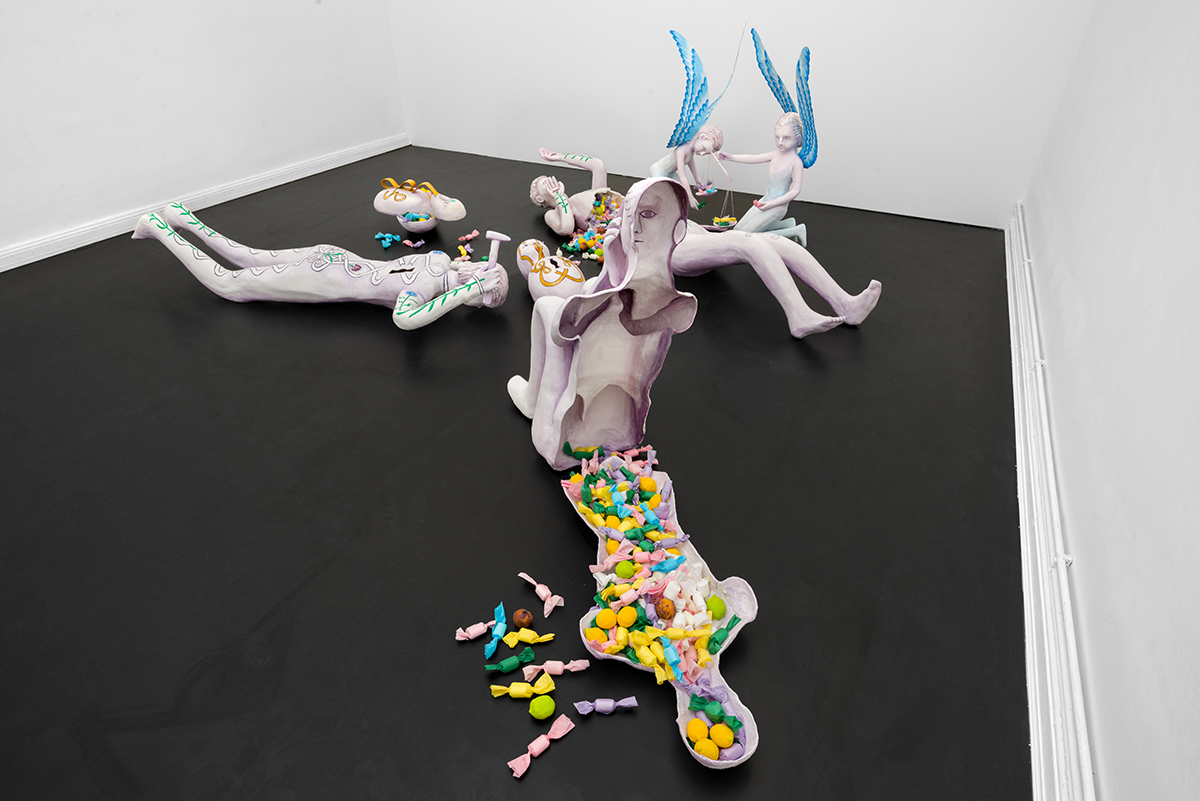 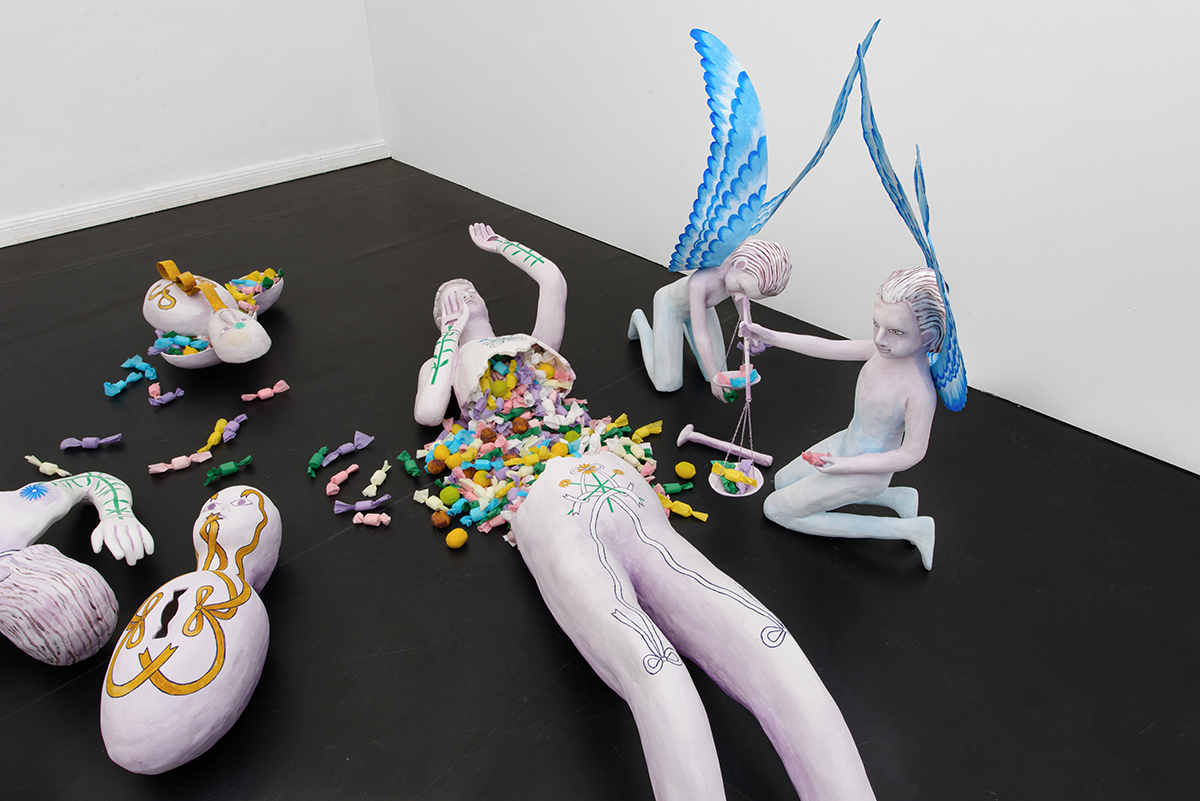 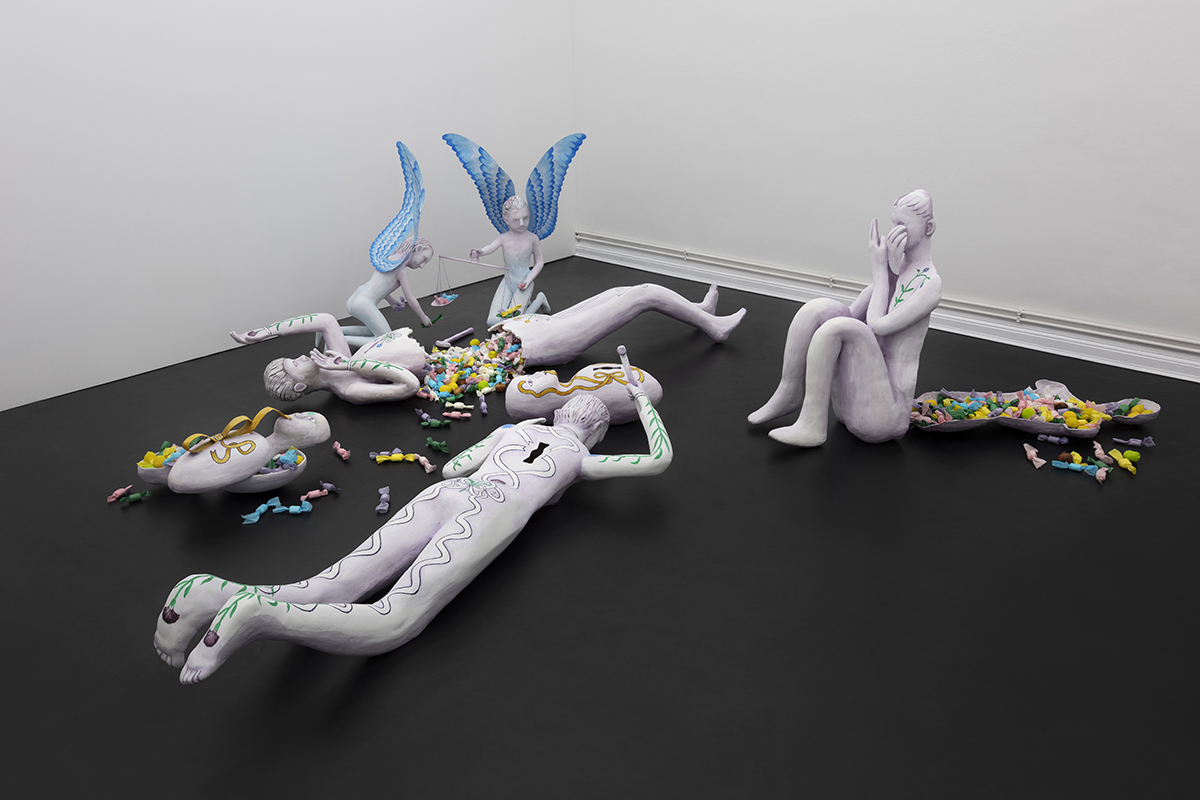