We walked around the massive lagoon in the middle of the rice fields, which on one side has water leading nowhere. The plants were emerald green and budding with small grains not yet harvested. We stopped. You pulled up one of the rice plants and began to shred its harvest. It was at that moment when you told me that the lagoon can be crossed by paying one of the boatmen with one of those banknotes with the image of two bridges printed on them. You must pay the price to cross to the other side. We continued walking in silence until we finished circling the lagoon completely. The trail made a circle that takes several hours to complete. We reached the beginning, simultaneously the ending, with not much having changed. Only the dragonflies that once flitted among the rice fields had changed their position and were resting in an irrigation ditch. But everything else seemed the same as before.

The roundabout to the lagoon starts and ends in the same place and does not allow any other route. No escape is possible. Marina González Guerreiro’s exhibition Tras cada fantasía escapista hay un día a día que sostener (Behind each escapist dream there is the day-to-day to sustain) operates on this desire to escape to another place that sometimes becomes impossible. It dwells on the flickering of what happens in immobile, temporal stages. And, above all, it opens the question of what is after the escape, and what is the sustenance of its material conditions.

In this exhibition, Marina proposes a narrative that brings us back to domesticity. She rehearses a possible visual resistance to what is received externally and thus conceives the interior as a place of refuge. She sets it in motion by formulating an opposition that refuses to accept the given, proposing other narratives in our most immediate present. Throughout her work, she tries to address issues dealing with concerns embedded in everyday life. This is the case of the refrigerator doors, which can be daily portals for daydreaming, a place of escape. However, they are also doors to nowhere; places that represent a certain melancholy for the infeasibility by cultivating a different life outside their limitation. Marina’s refrigerators are decorated with small objects that refer to the transit of things such as birds, bridges, or airplanes, which she mixes with anodyne elements. They are memories and everyday things. Marina told me that, for a long time she observed the refrigerator door as something that is built through the daily imagination and collectivity. Magnets are part of those objects she collects that form a constellation of gifts or souvenirs of places we escape to. Her works thus function as metaphors of our reality. If we think of them as a crystal refracting, they open up space for reading and interpreting that allows the contingency of those other stories to exist. Therefore, each one of the works presented in the exhibition activates the possibility of being beyond the act of the insistence to exist.

Within this, there is a desire for the abundance that runs throughout the installation – a non-cumulative collection in material terms, rather than a desire to preserve emotions and images in pursuit of this escape. By producing a story that is reconstructed in pieces, a disordered and scattered narrative is fabricated. This same accumulation is repeated in the form presented on the floor of the space. The entrance becomes an object that could be a large tabernacle, a jewellery box, or a secretor where all possible secrets are kept. During the seventeenth and eighteenth centuries, secretors were designed in a personalistic way to hide papers and precious objects in their multiple drawers that were locked. It is one that Marina has made especially for this purpose, composed of ceramic and plastic containers and small objects. A liquid that looks like milk also emerges from its hollows, celebrating the origin of things. Rice is arranged around the jewellery box, appealing in celebration and abundance. The grains of rice could be all those seeds of the fields surrounding the passage through the lagoon, which are the germs of the possibilities to come. Every desire to escape is stored and fulfilled in every hole or corner of the piece that Marina has already ordered. And the escape is traversed by jumping over the rice until the entrance and exit door appear where one day the dream will end. The dream that is just below the Palmito with those necklaces of pasta bringing luck. We must go through the lagoon as one who swims in the density of chewing gum until we go out through one of the windows that are so similar to refrigerator doors. Inside the lagoon is the boatman transporting the others from one shore to the other, another endless route. 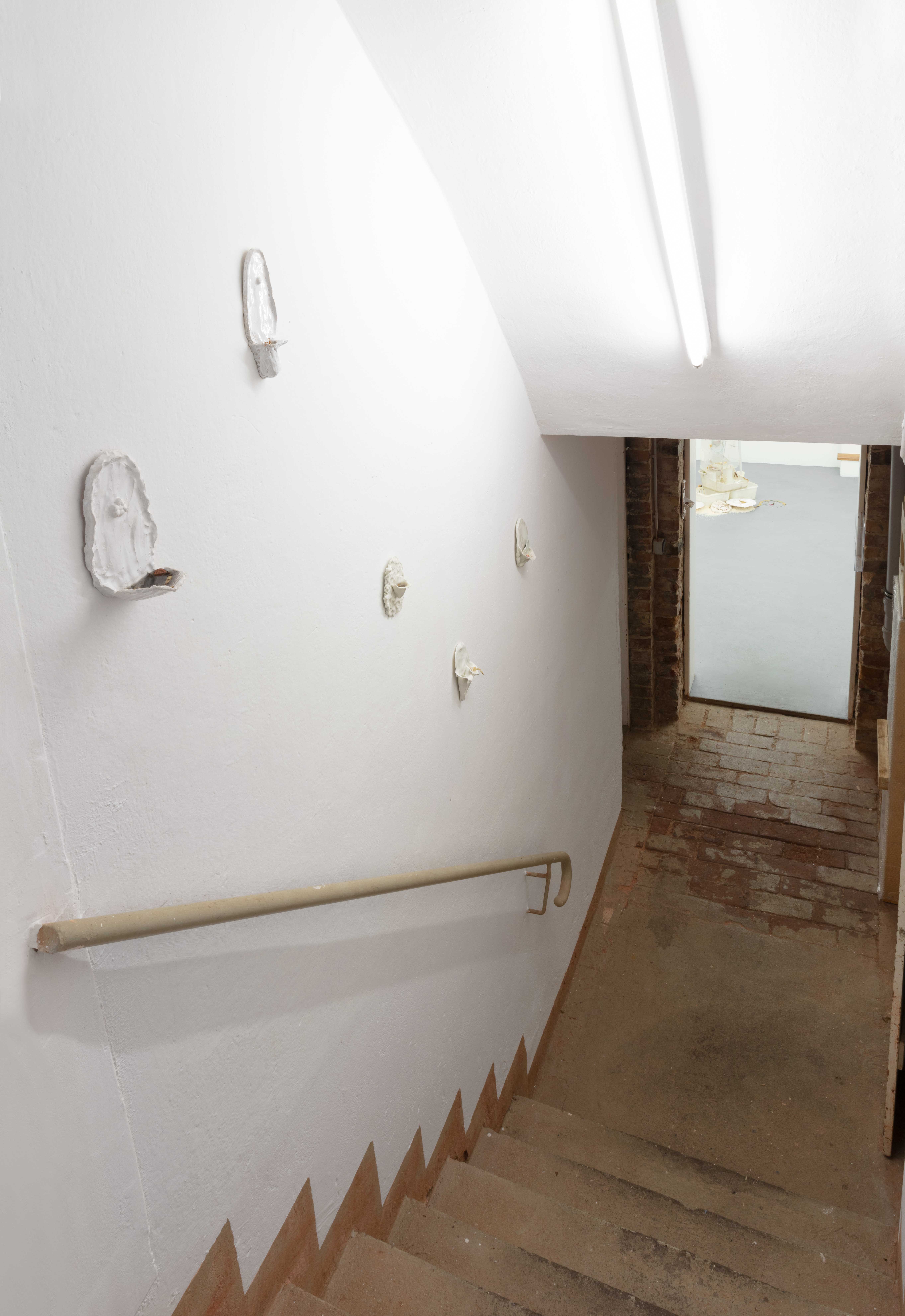 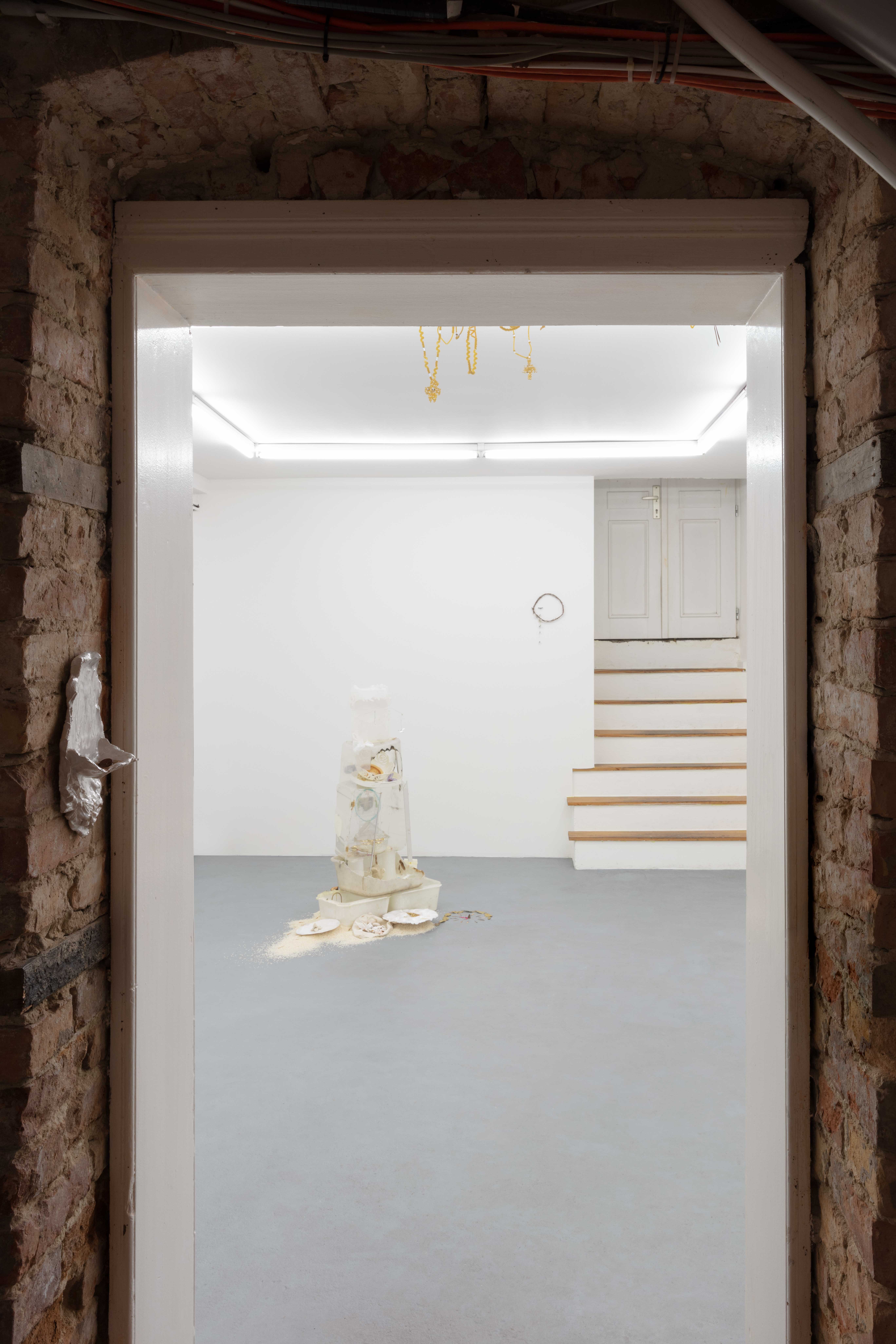 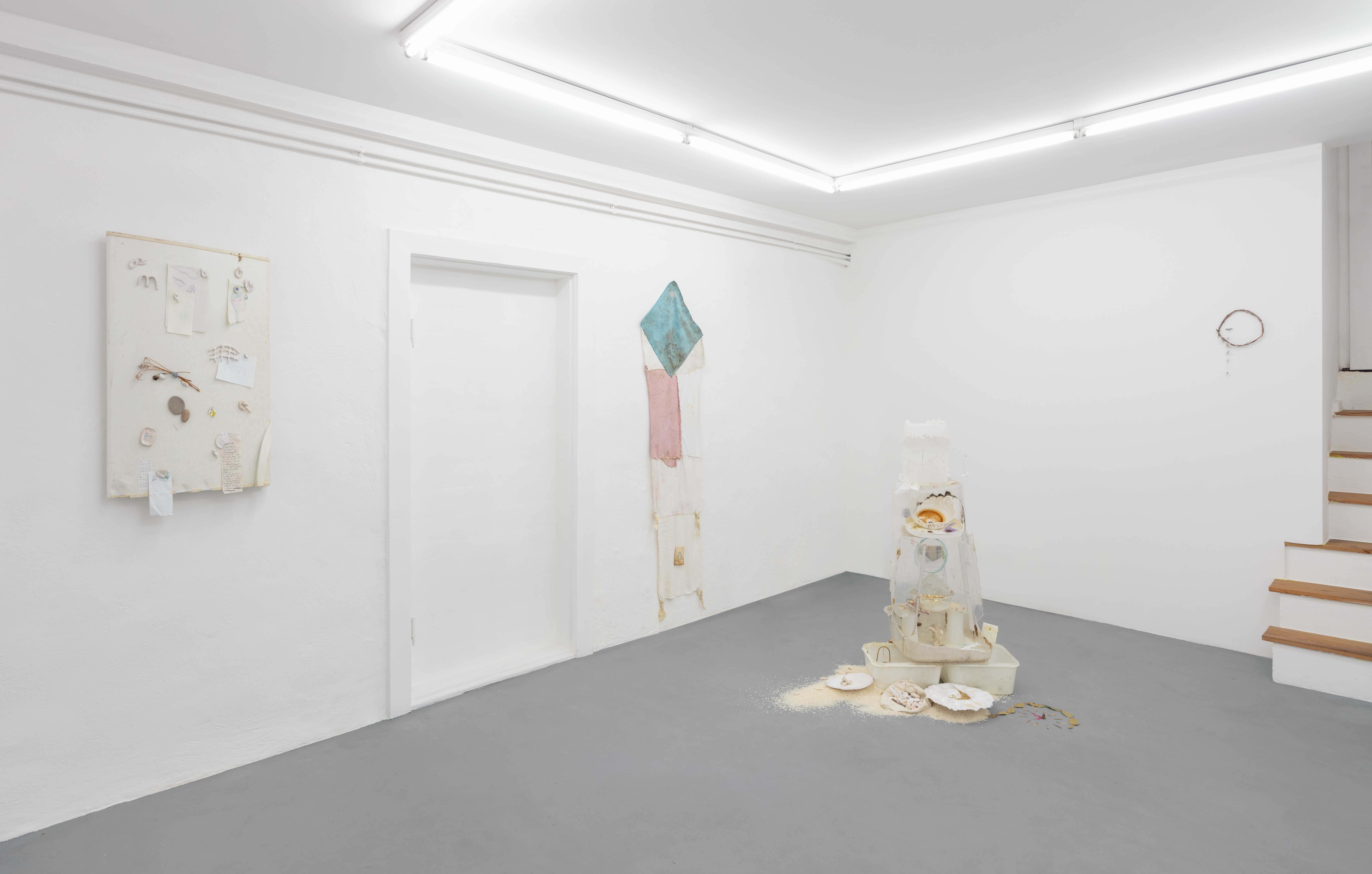 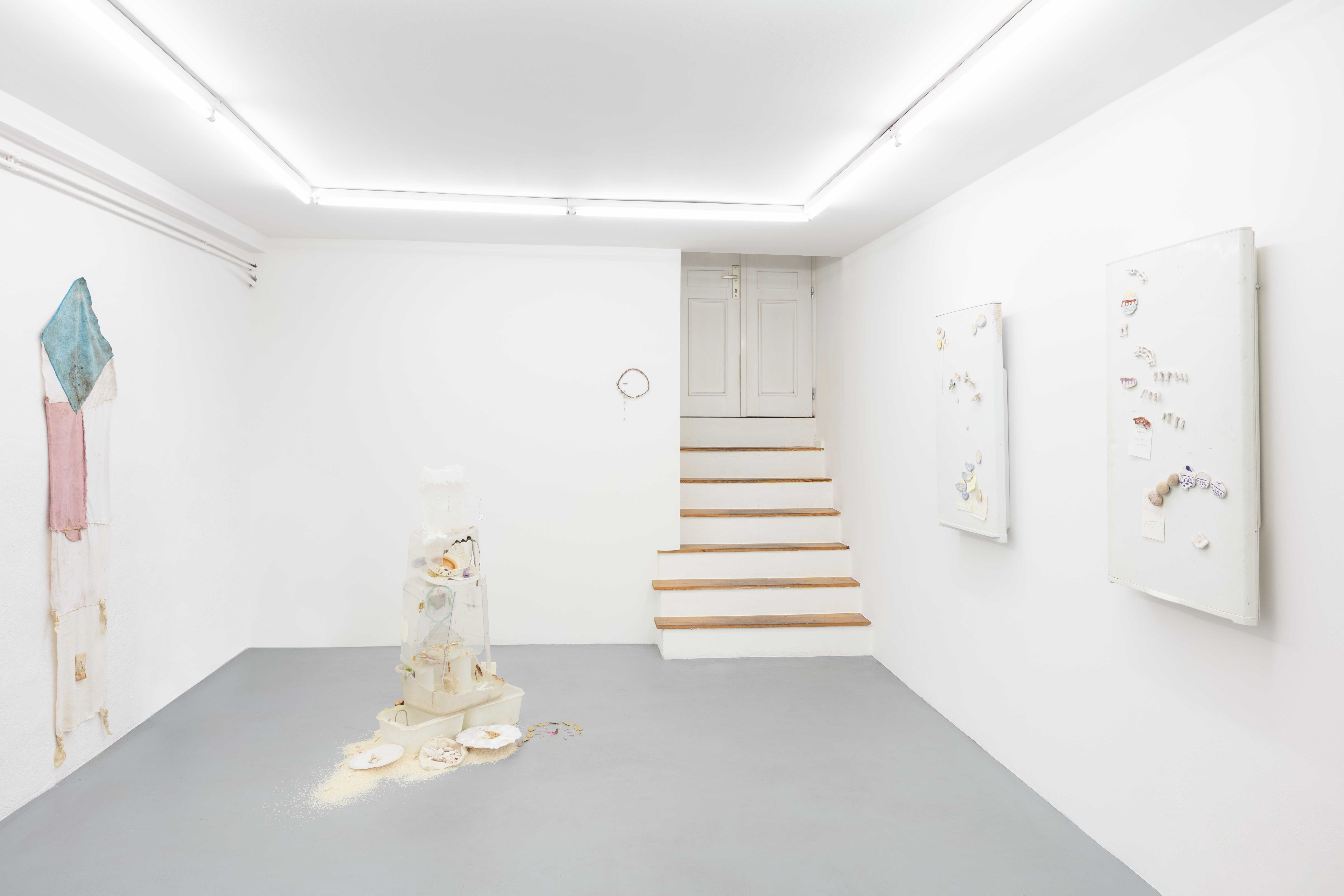 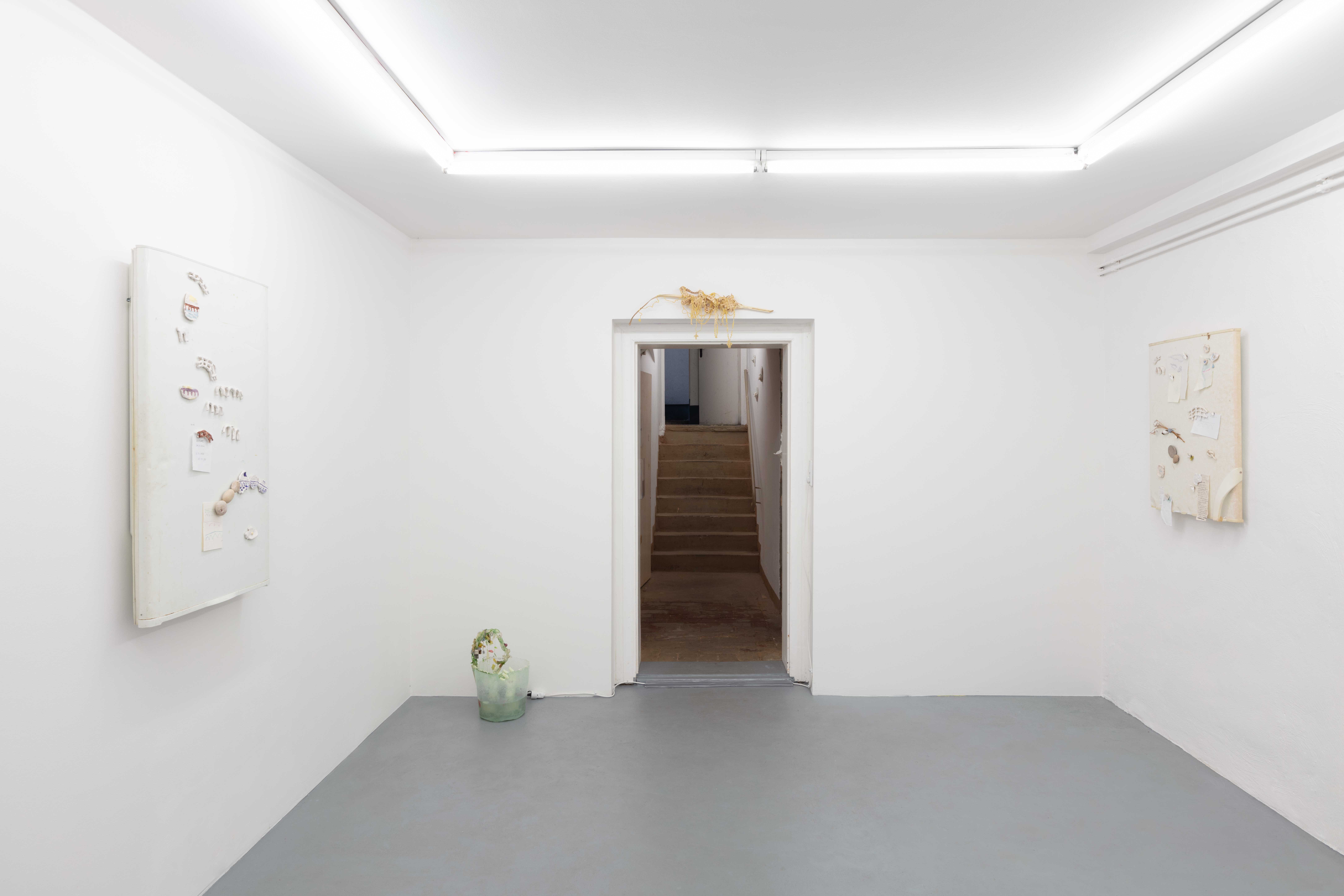 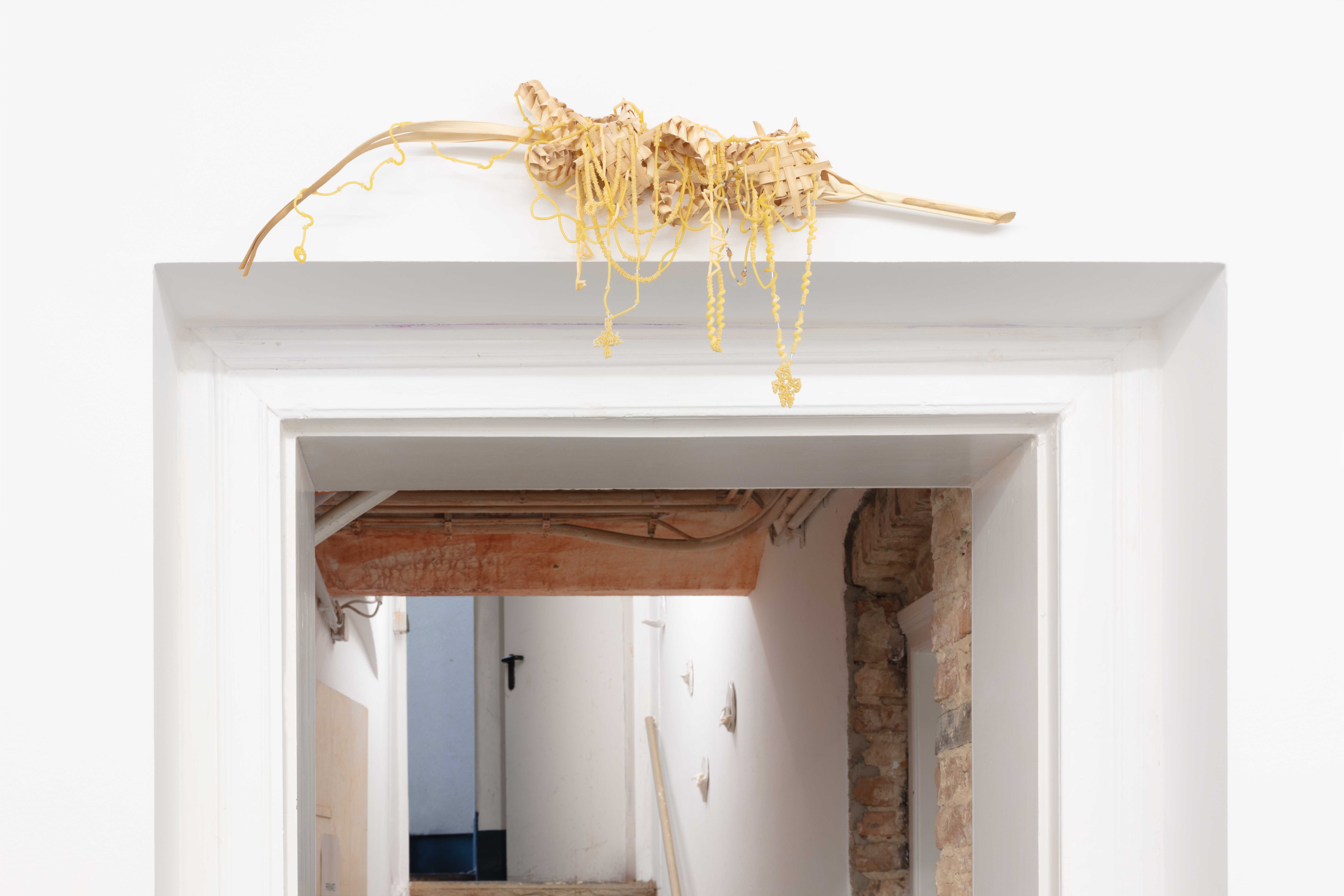