Sofía Salazar Rosales (b. Ecuador, 1999) lives and works in Paris, where she is currently studying at the National School of Fine Arts, and Quito, Ecuador. Born to a Cuban father and an Ecuadorian mother, Salazar Rosales stitches together her ancestral heritage with regional history to produce evocative sculptural works.

Objects, often displaced by travel and transport, are selected by Salazar Rosales for their social and economic connotations. Using various processes that enhance their material quality, she preserves, fossilizes or reproduces these objects. Implementing direct and corporal approaches, her sculptures contain strong personal messages. Focusing on the physical and emotional weight her objects hold, the works are able to resist the overwhelming effects of social injustice and colonial erasure.

Upon entering the gallery, corrugated panels made with raw sugar, resin and fiberglass divide the room. Determining how the visitors navigate through the space, Zafra (2021) becomes an elegiac work that references the zinc roofs often seen in Latin American architecture as well as the economic growth that resulted from the region’s natural resources. Areas covered with raw cane sugar create the illusion of rust, exposing the fragility of these roofs which are part of an urban landscape built from displacement. Zafra, which comes from the Spanish word used to describe the late summer harvest of sugar cane, also finds its etymological origins in Arabic as “safra,” meaning “journey.” Sugar cane, a product which was centered in the colonization of the Caribbean and Latin America, implies the countless distances crossed along the Atlantic. Inserted in the space, these large panels redirect the visitor towards the corner where full sacks of goods made with wax rest.

Containment, a form often addressed in Salazar Rosales’ work, is felt in the panels of Zafra as well as her representations of bags in wax entitled We are contextual and sentimental (2021).These bags, skin-like in texture, evoke historical associations of colonial exploitation, which still prevails today. Taking form in parcels, bags, sacks and pouches, containment is a key component of trade, the movement of people and objects.1

Aliento (2022) comes from a found image of a plastic banner once sold in the costume and decorations store Deko Bahrendt, the previous tenant of the gallery space. Printed with the word “Aloha,” the sign exemplifies cultural objects and items such as Hawaiian leis, exoticized and sold in the framework of late capitalism. The work, a flower garland made of scrap metal, becomes an industrialized representation of the traditional garland and appears to be slowly rusting, as if it were decomposing under the weight of burdened production. Translated from Spanish into “breath,” Aliento is the labored exhale that lingers in these walls.

The objects made by Salazar Rosales tell of monsters born from a failure of empathy and solidarity, monsters created by the ferocity of colonialism, driven by the winds of capitalism. Neuroscientist Antonio Damasio’s psychological research can be a guide to understanding these systemic failures. For a long time, emotion was seen as a weakness, an impartial influence on decision making. However, Damasio’s studies aim to prove that pure reason is not the true social guide in our society. In a number of case studies where patients were showing lack of empathy, due to damage or surgery to the frontal cortex of the brain, Damasio found their resounding lack of sympathy was the root cause of their antisocial, destructive or indecisive decision-making tendencies. When we lose the ability to feel empathy and sentiment, we lose our social being.2 As a necessary tool for the demarcation of right and wrong, Damasio showed how emotions are rational and vital to societal health.

This thinking has shaped how Salazar Rosales relates to her work through the emotional lens. Insisting on the importance of sensations and feelings and letting herself be led to choose materials based primarily on the degree of affection that they transmit, Salazar Rosales follows a philosophical discourse of great importance, one that submits reason to the ability to feel. Nourished with a caring relationship between the artist and the artwork, she emphasizes the sentimental value of her creations to oppose the neocolonial context they are shaped in.

Salazar Rosales has created Meeting space(s) (2019-2022) on a similar foundation. Woven in the pattern of an ‘estera,’ a common floor mat found in some areas of Latin America, the work uses cardboard rather than the customary totora plant – a reference to the industrialization of traditional media and artisanal craft in exchange for a commonly used material in transport. Here, the cardboard becomes a relatively flat object where the idea of transport is replaced by support. It asks not for movement, but for congregating, sitting and staying. Salazar Rosales’ meeting spaces not only accommodate her pieces and other artists’ work, but also serve as a point of gathering where weaving is activated upon each visit. Bringing a community together, the work becomes a facilitator of empathy and togetherness – much like the individual strips woven together.

notes:
1. Ursula K. Le Guin (2019), The Carrier Bag Theory of Fiction, Ignota Books, London, UK. In her essay, cultural anthropologist and sci-fi writer Ursula K. Le Guin suggests the first tool invented by mankind was not the spear as many scholars previously believed, but rather the carrier bag – a container – that brought forth units of measurements and ascribed value that made trade possible.
2. Antonio R. Damasio (1994), Descartes’ Error: Emotion, Reason, and the Human Brain, Avon Books, New York, USA.

Sofía Salazar Rosales (Ecuador, 1999) lives and works between Paris, France and Quito, Ecuador. She is currently studying towards a master’s degree at the School of Fine Arts (ENSBA Paris) in the ateliers of Tatiana Trouvé, Petrit Halilaj and Alvaro Urbano. She holds a Bachelor of Fine Arts degree with distinction from School of Fine Arts of Lyon (ENSBA Lyon) where she worked in the studios of Pauline Bastard and Niek Van de Steeg.

Salazar Rosales’s work develops from a sentence she wrote: “Hay cuerpos cansados por el viaje que buscan enraizarse” (There are bodies tired from the journey that seek to root). Her interest focuses on how objects have a potential to show social, political, and economic contexts, specifically linked to the displacement of humans, goods and other objects.

She conceives her pieces as spaces of reconciliation to negotiate between the object, the material and their history throughout different contexts. Reconciling is also a constructive gesture in her work, which continuously transforms the objects with particular focus on their emotional effect. Salazar Rosales and her sculptures have a relationship of affection. The artist says: “We are contextual, but also sentimental.” 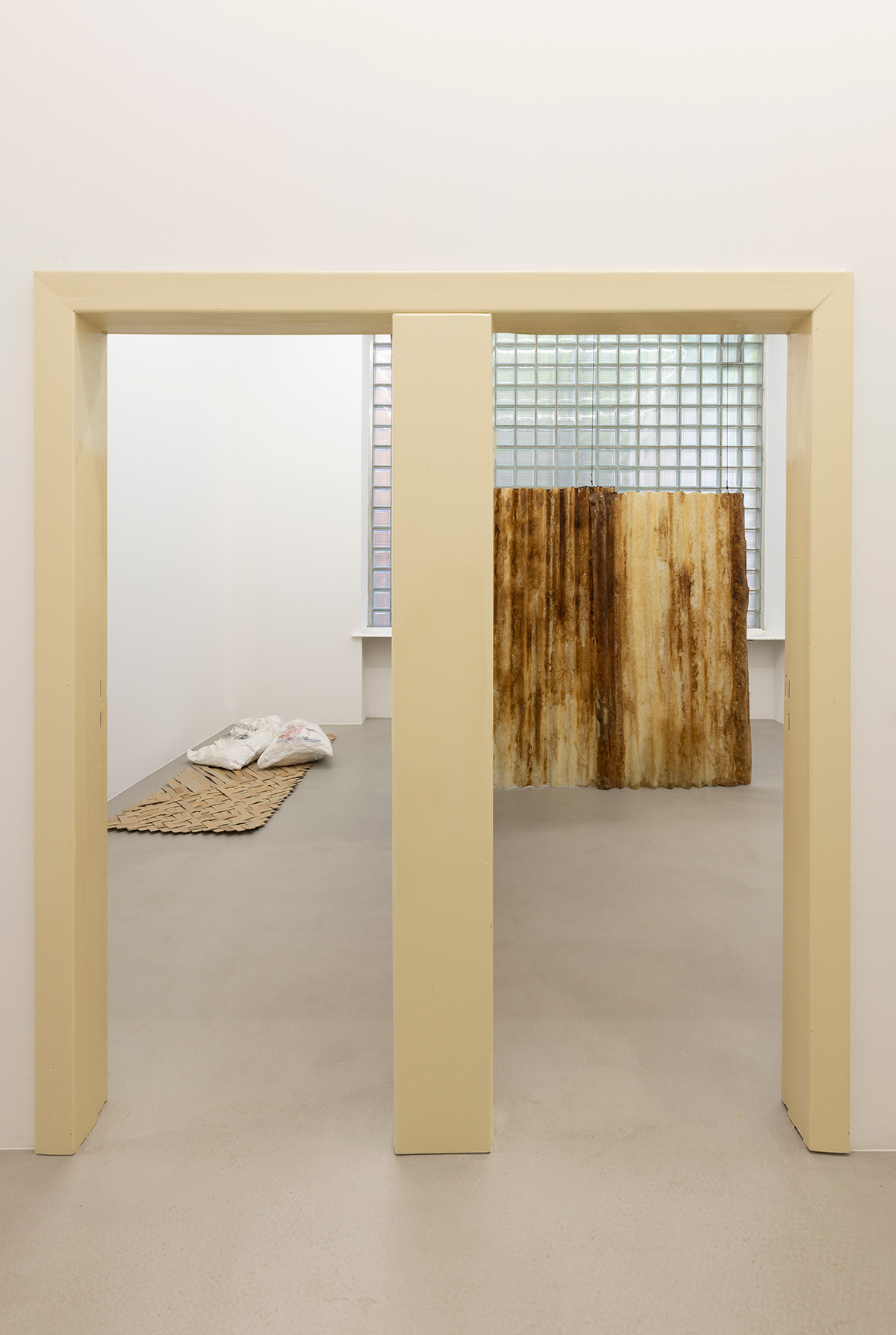 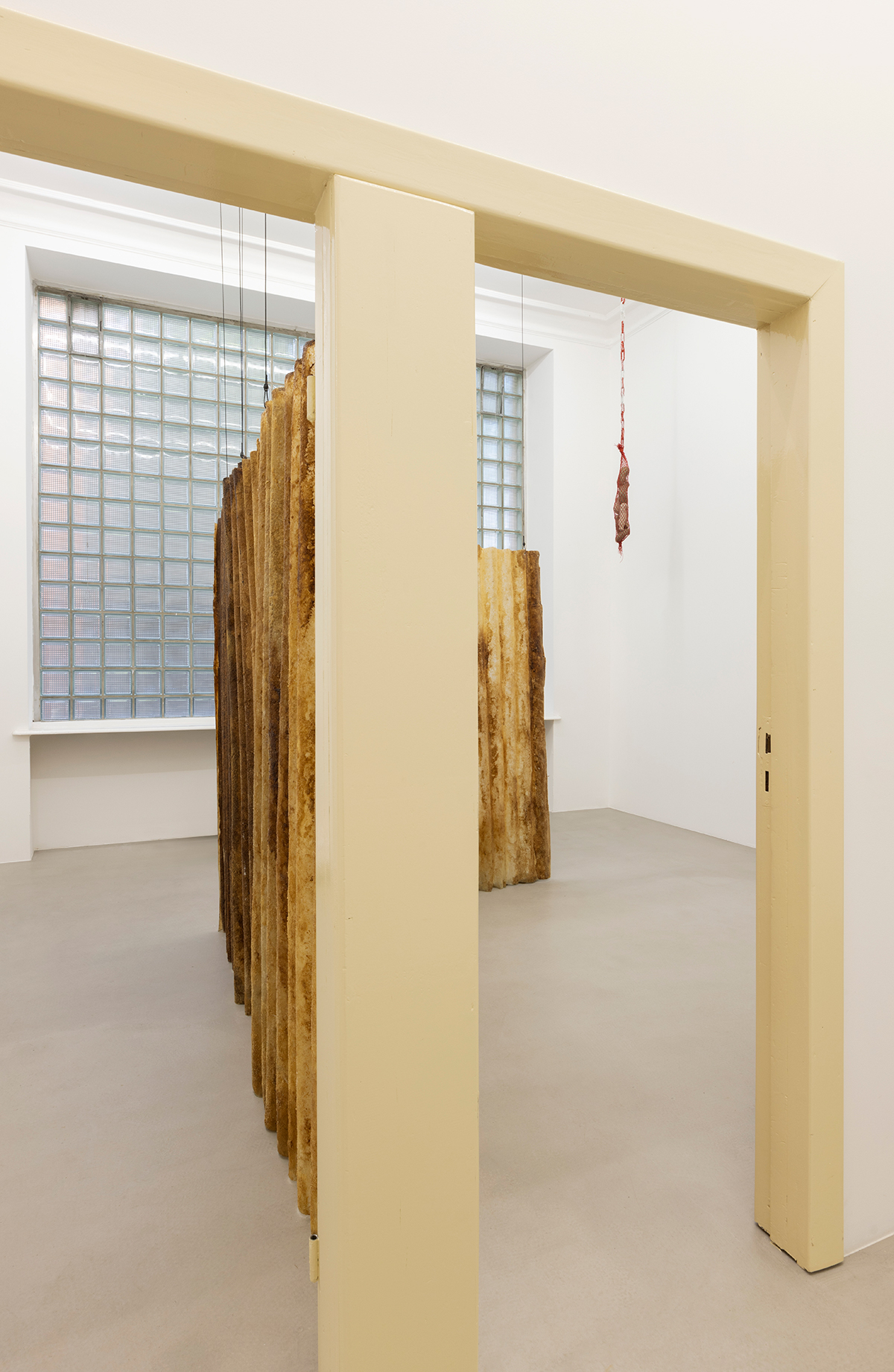 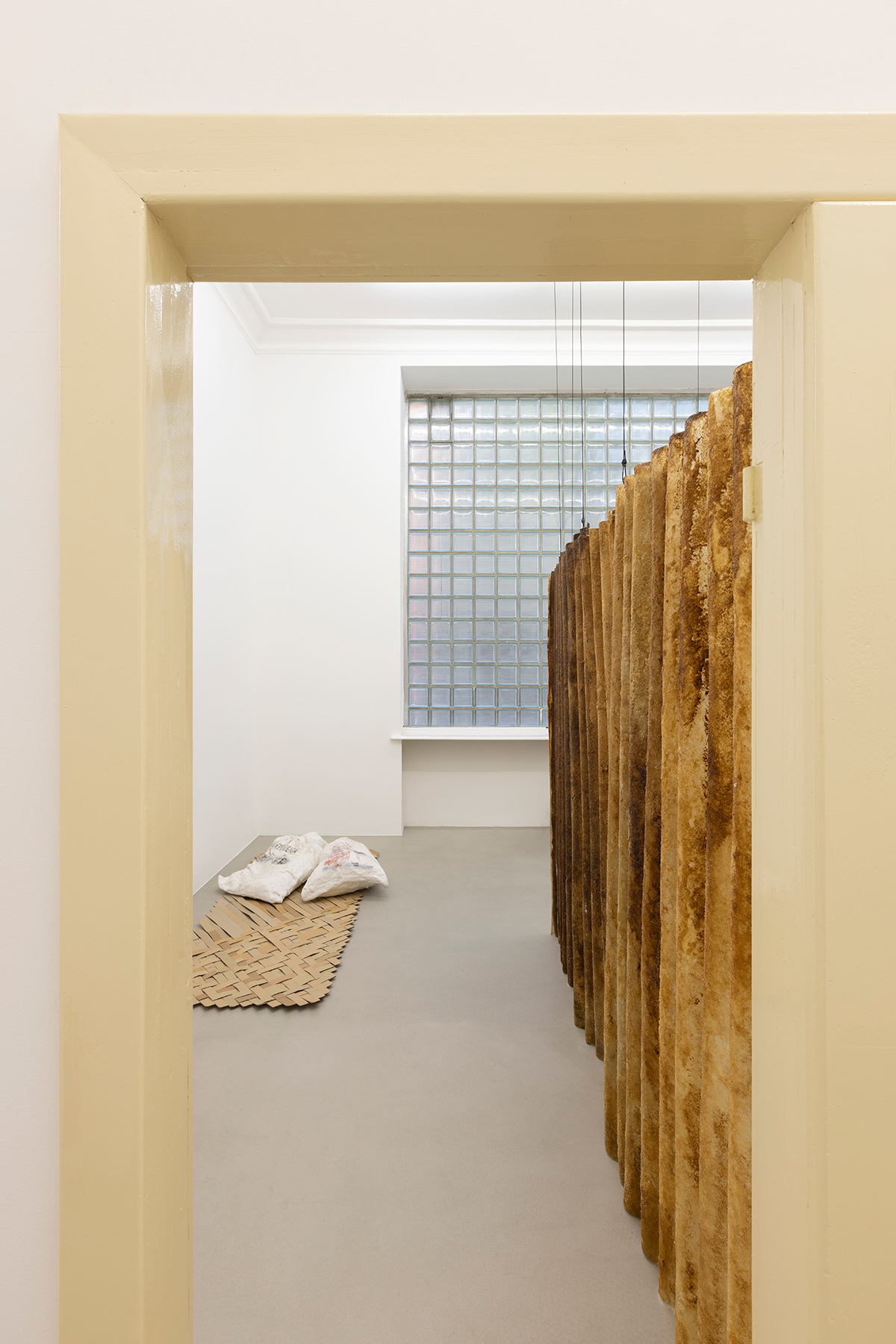 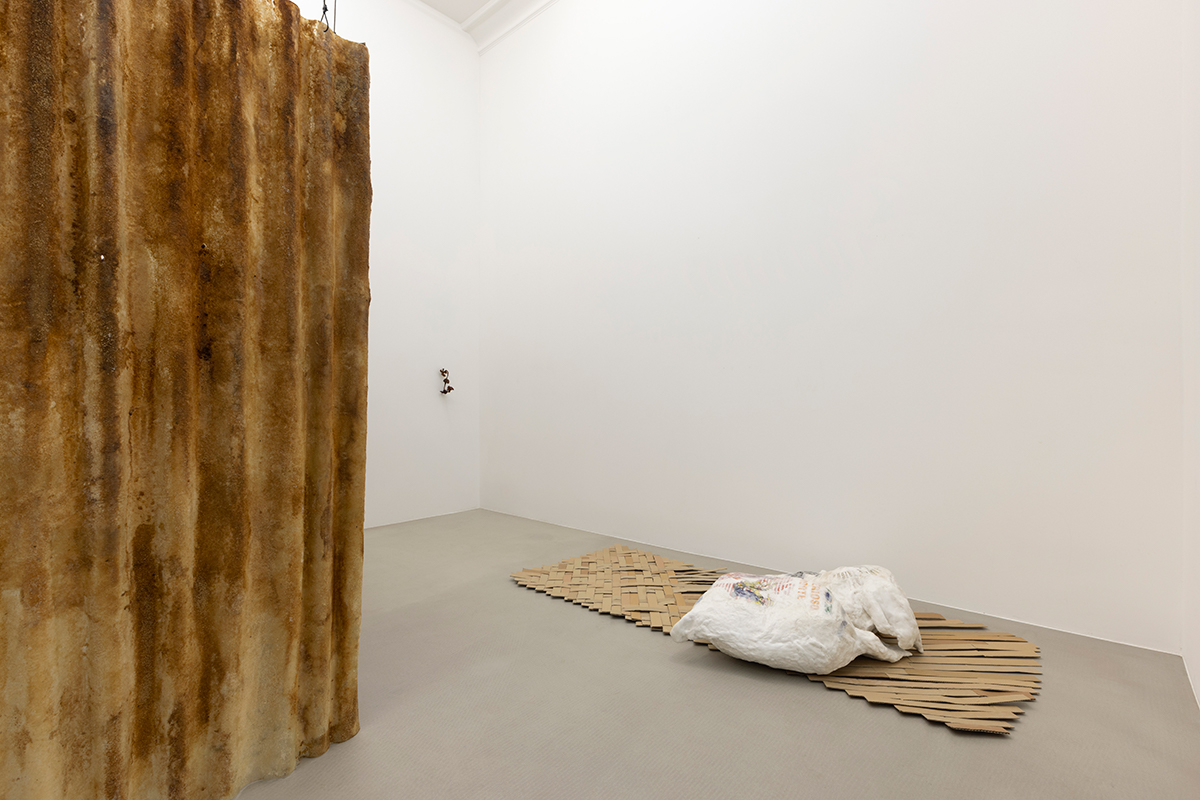 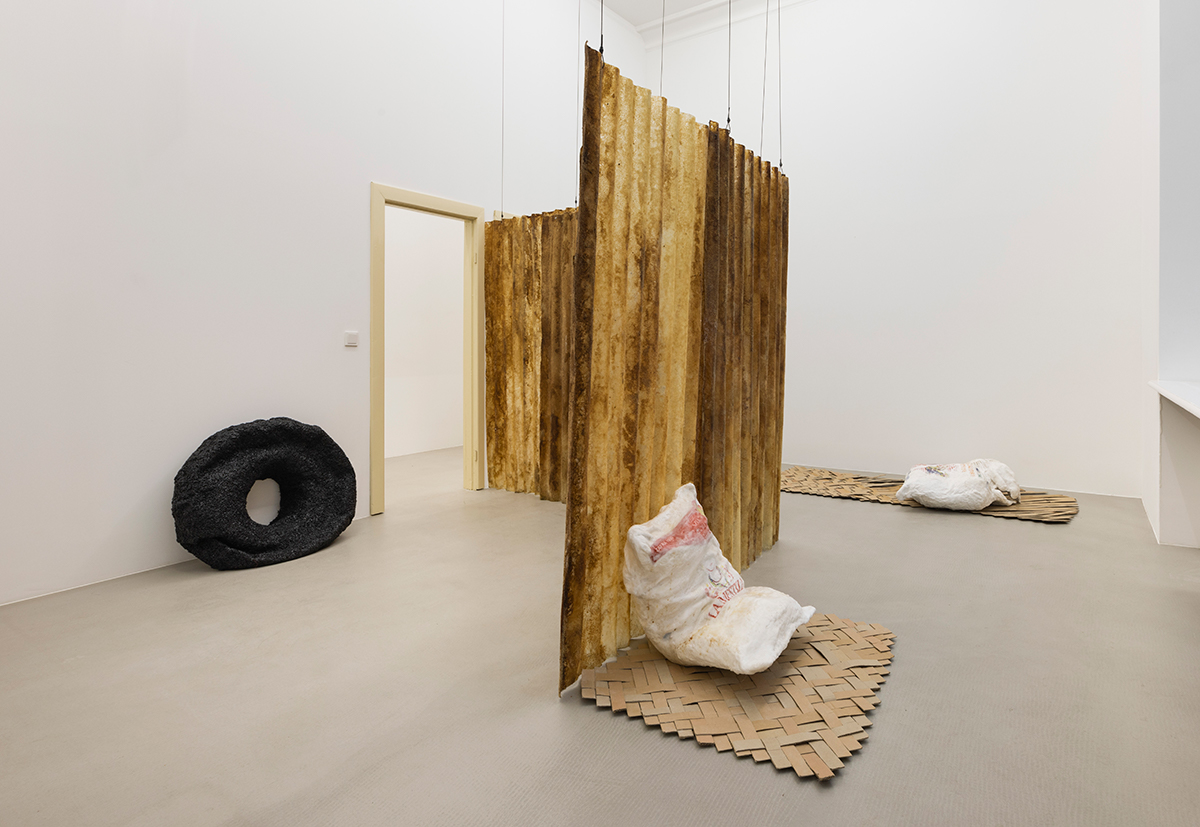 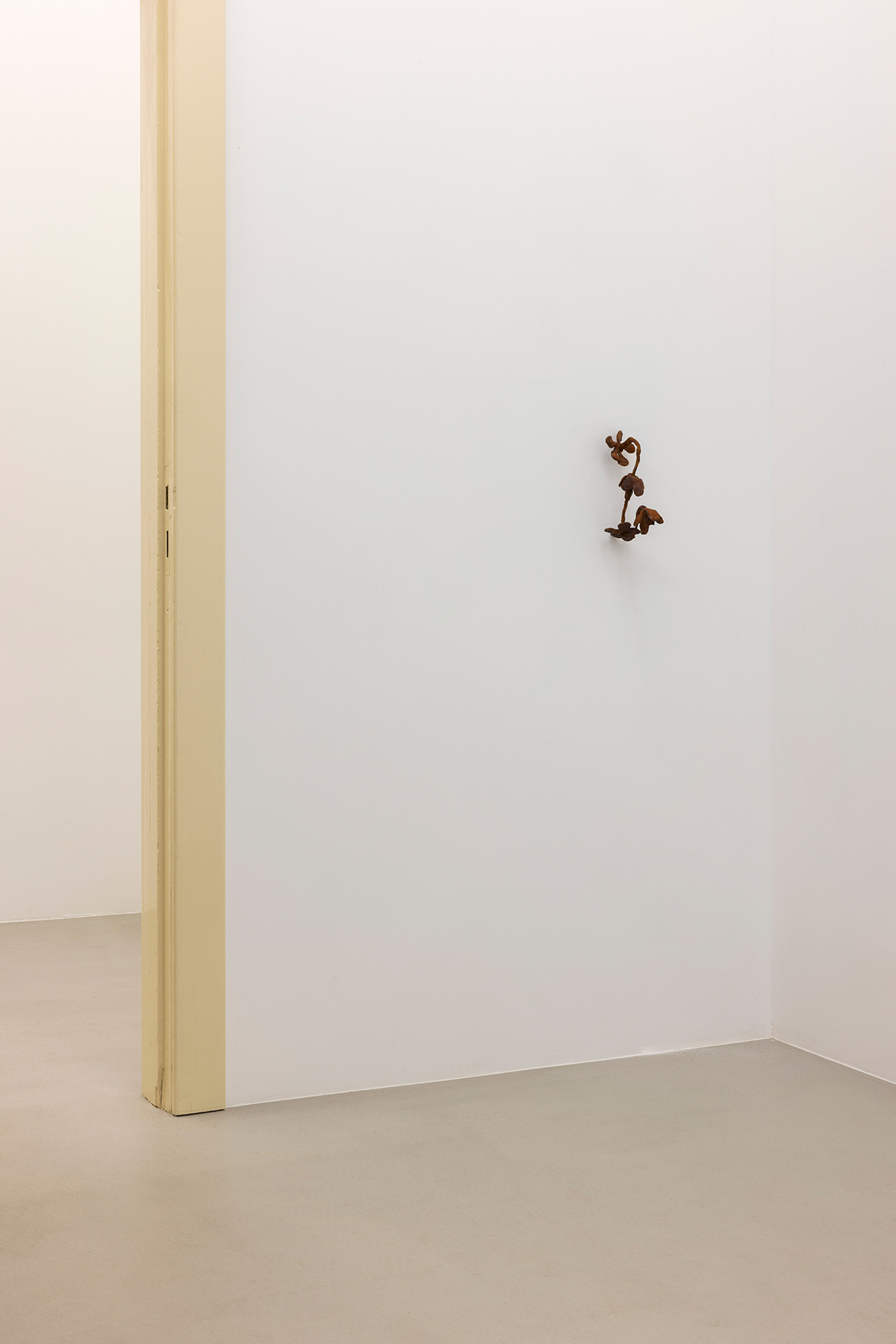 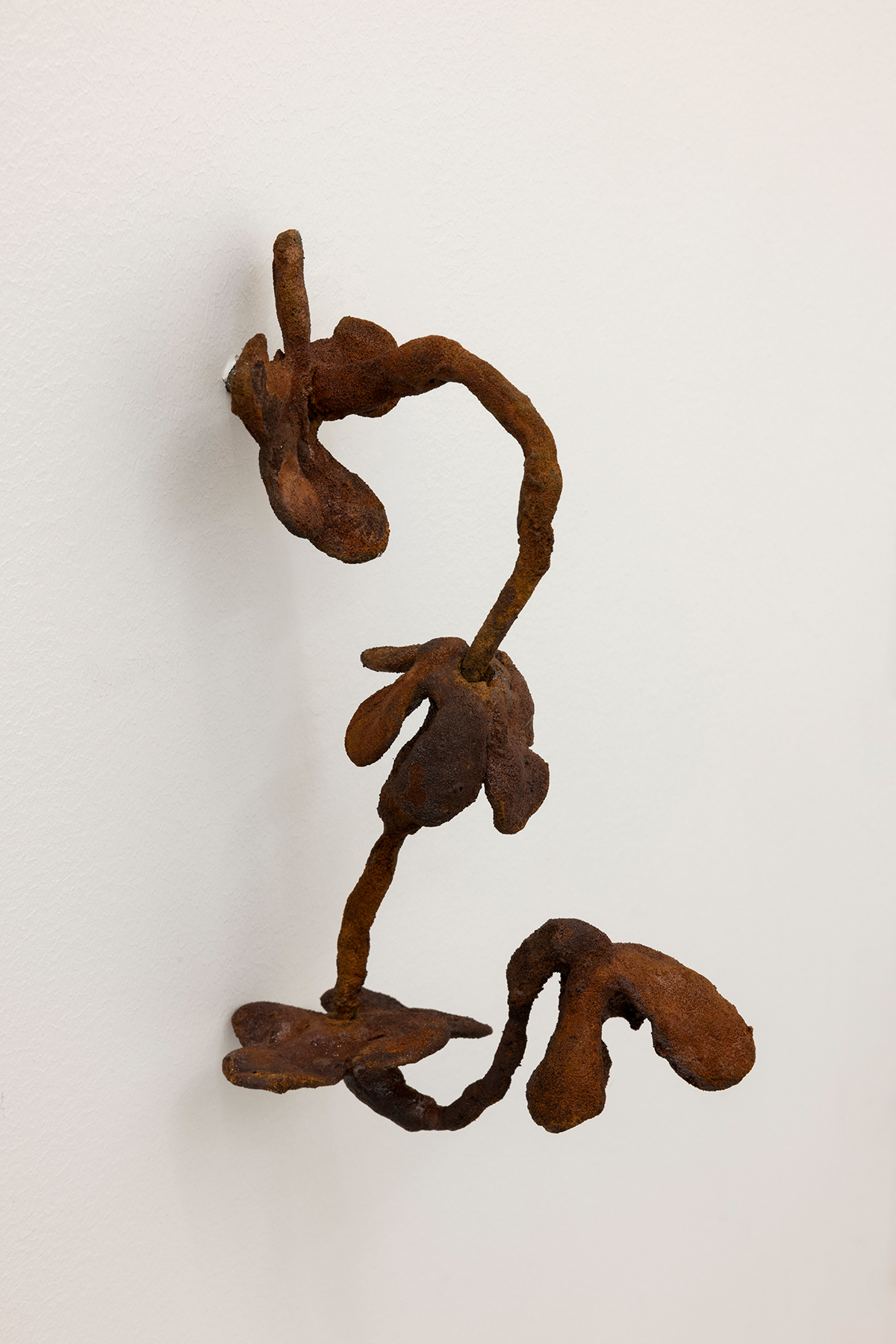 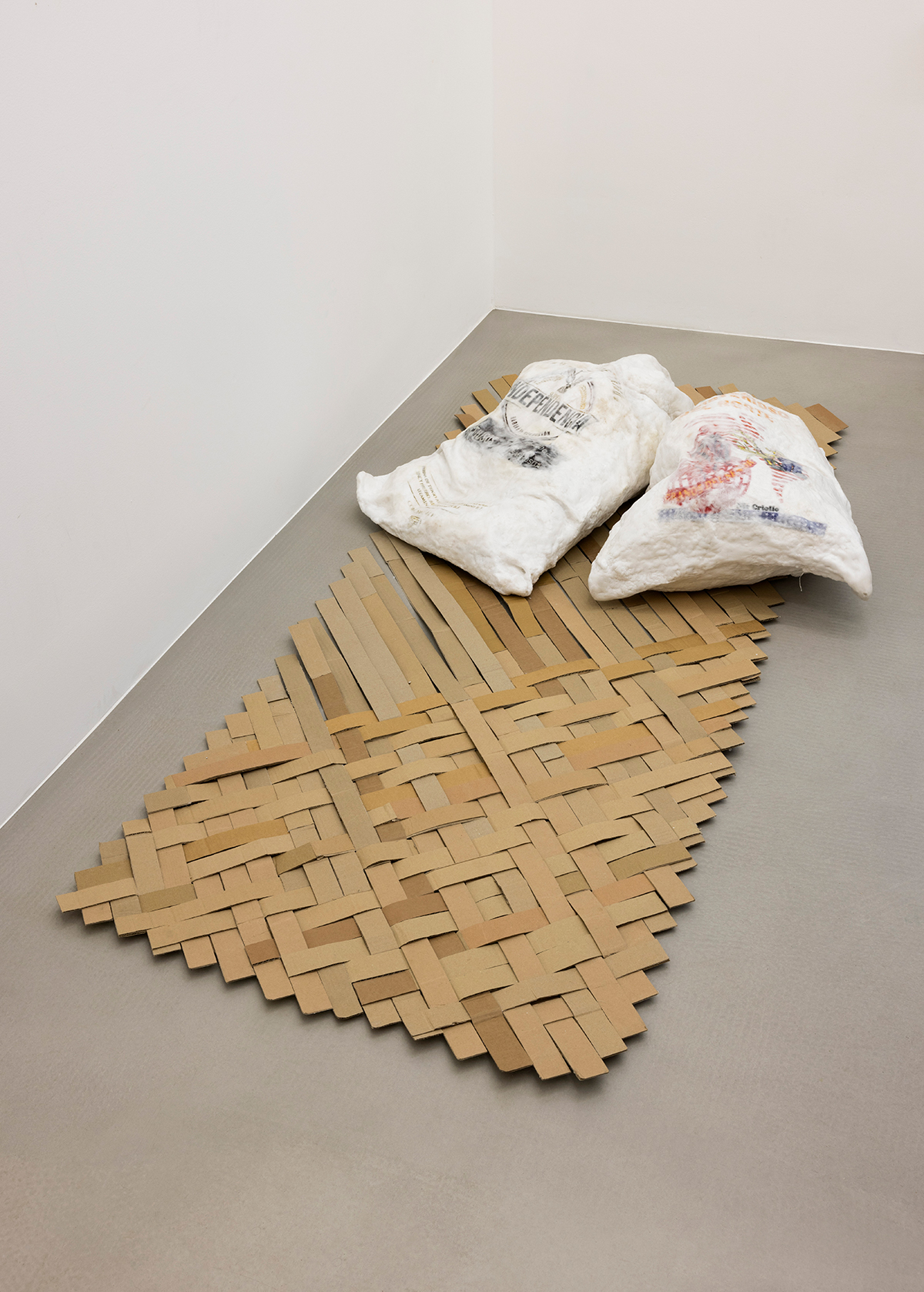 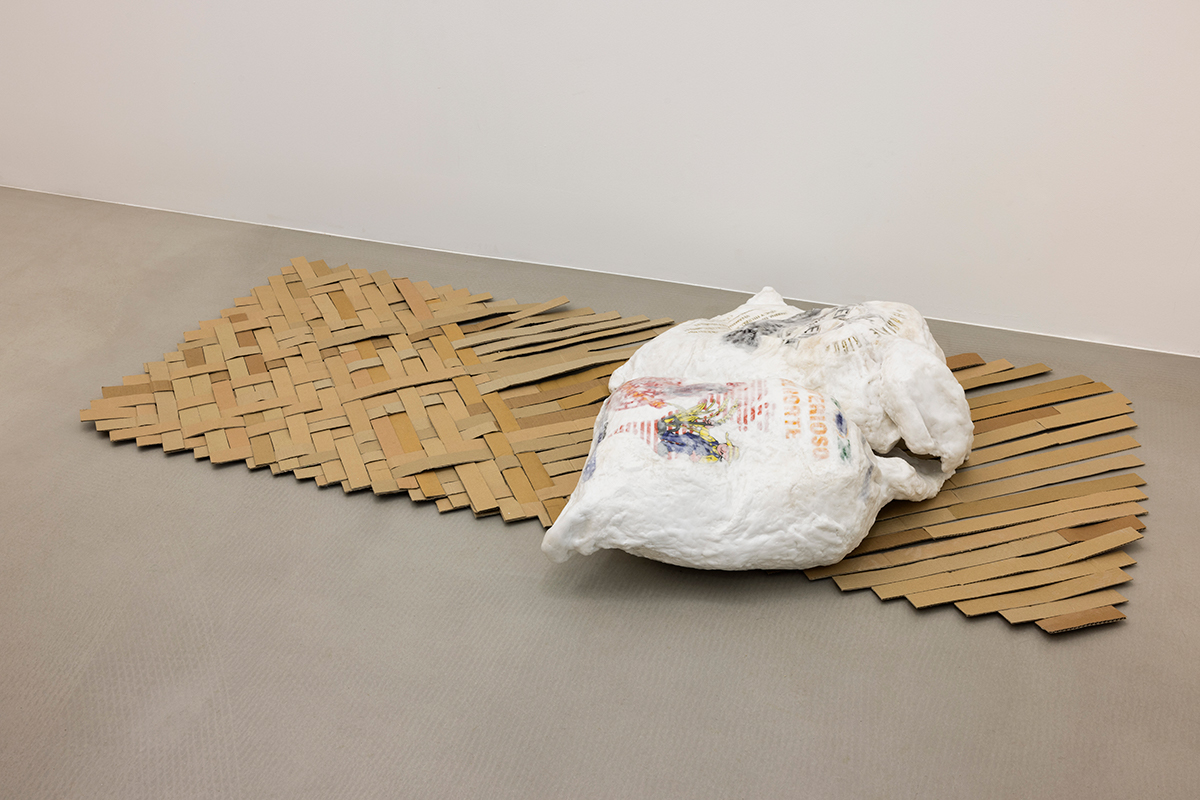 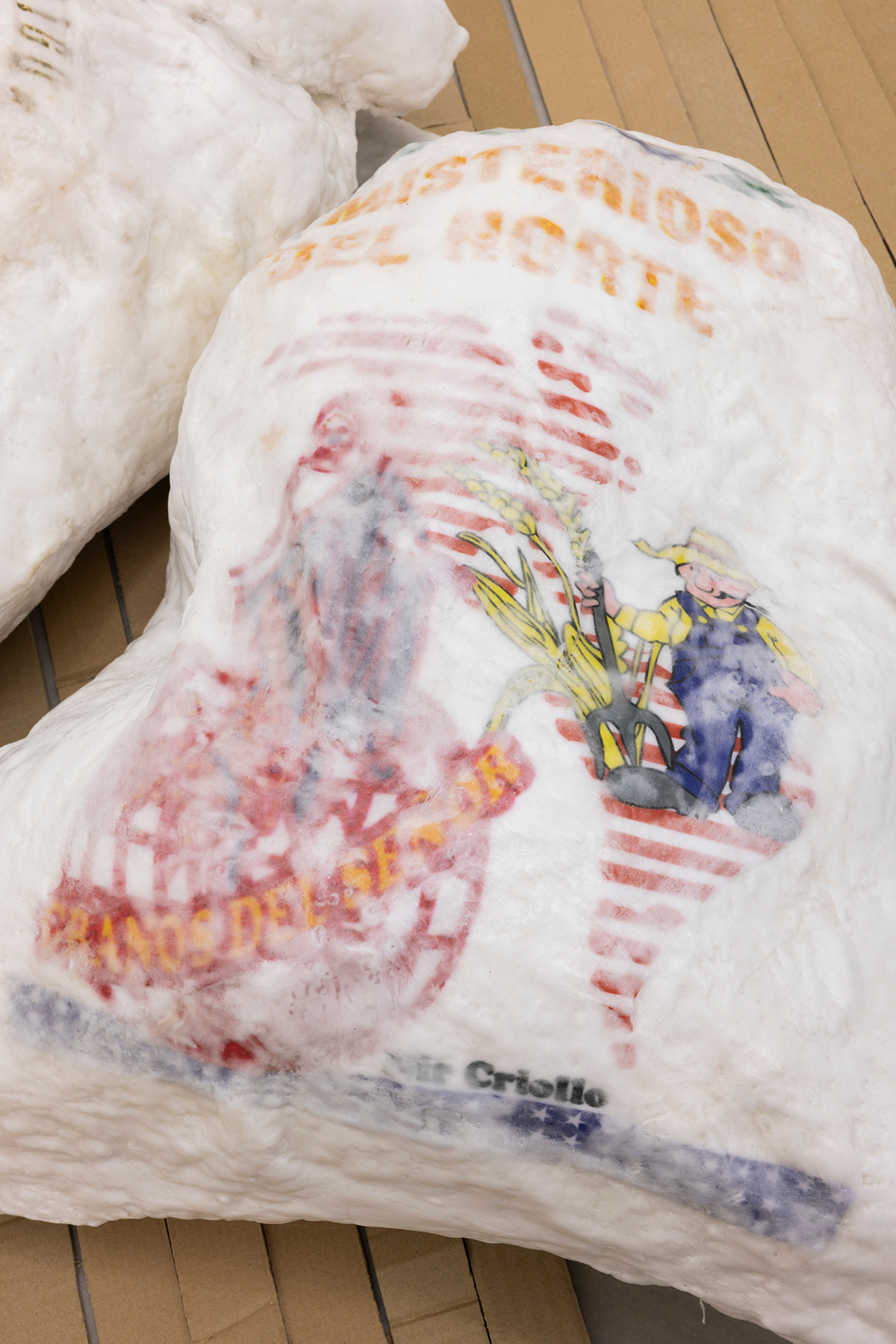 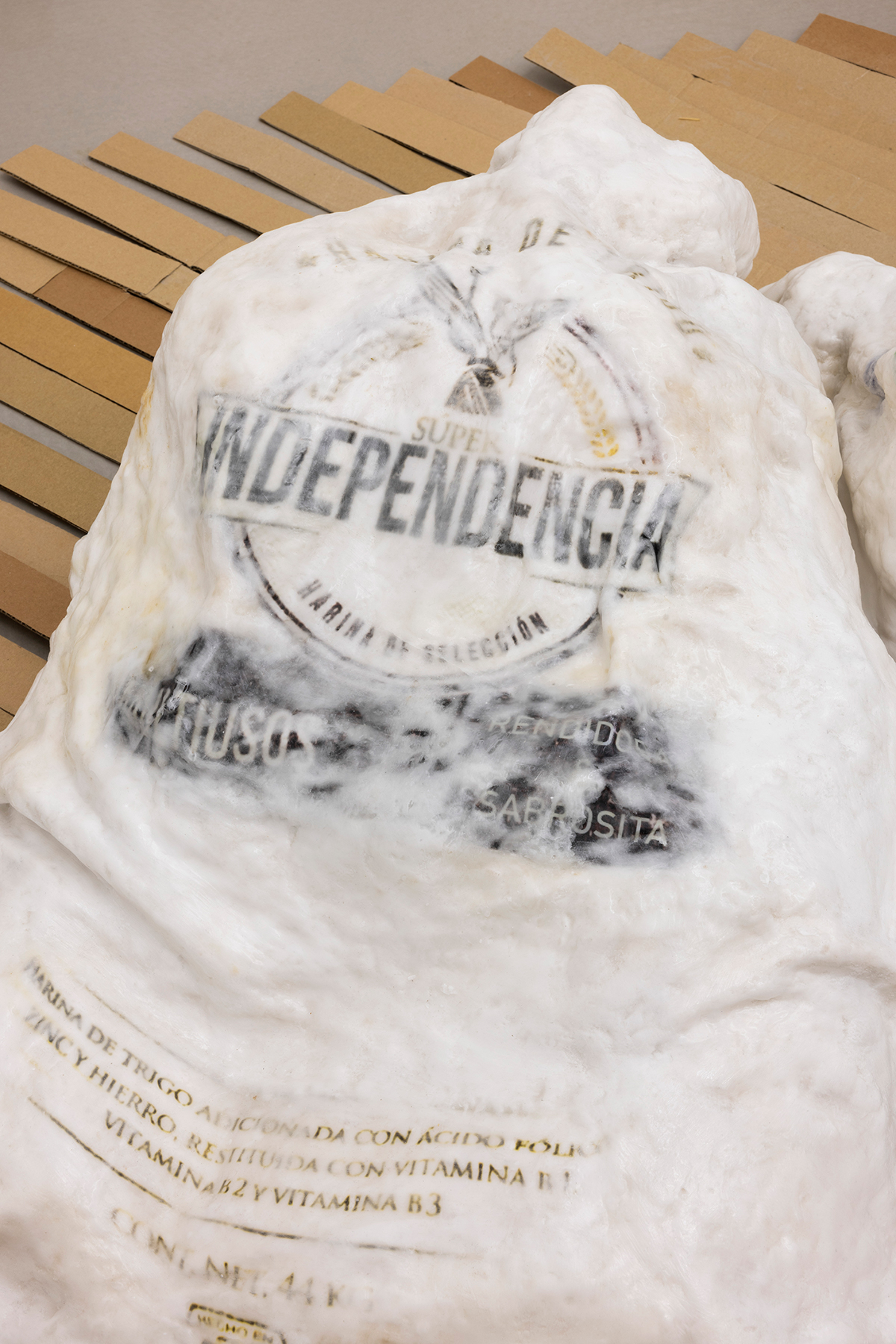 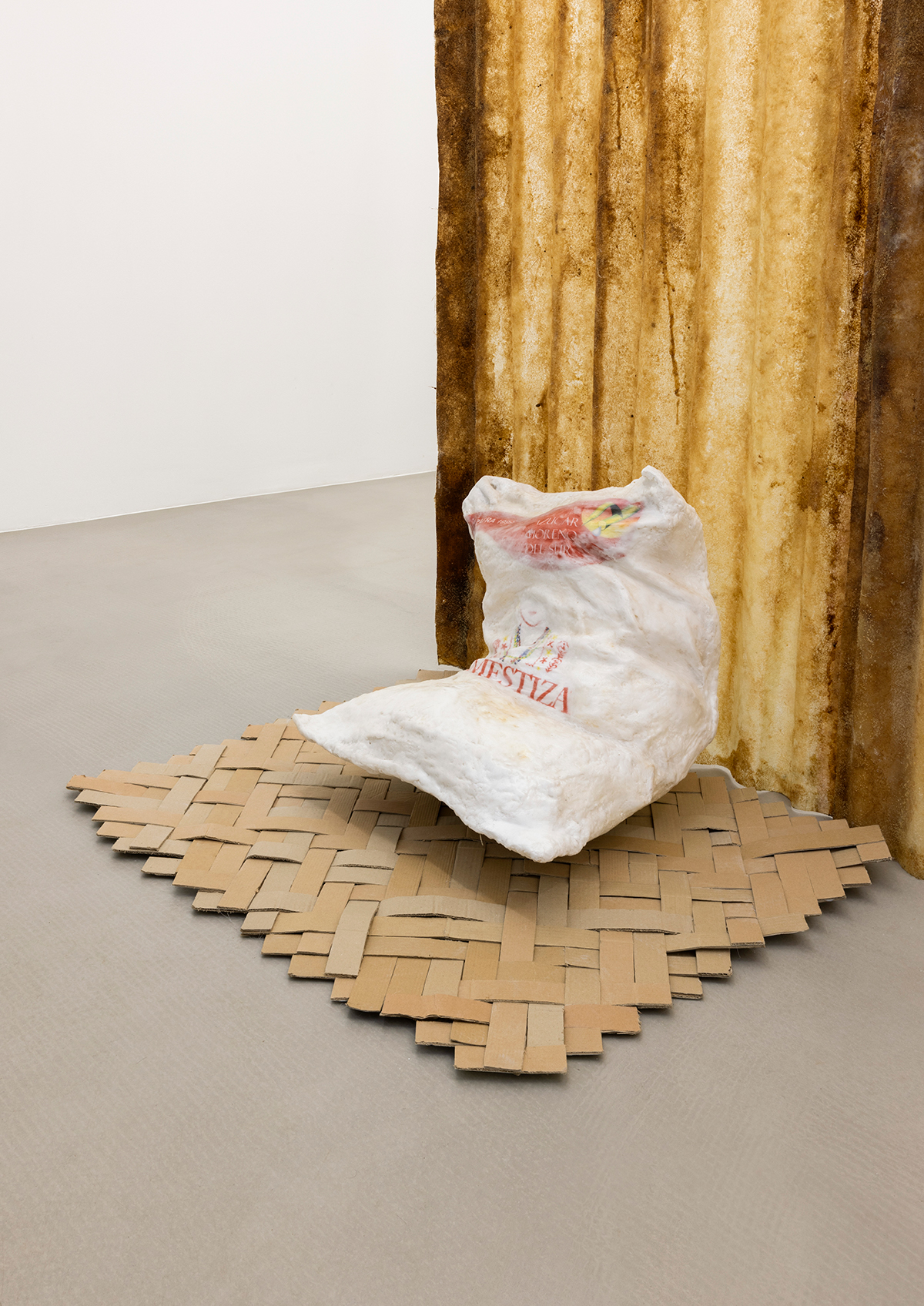 Sofía Salazar Rosales, We are contextual and sentimental & Meeting space(s), 2021, Installation view of Hay cuerpos cansados por el viaje que buscan enraizarse (There are bodies tired from the journey seeking to root), Bungalow/ChertLüdde, 2022, Courtesy of the Artist and Bungalow/ChertLüdde, Berlin 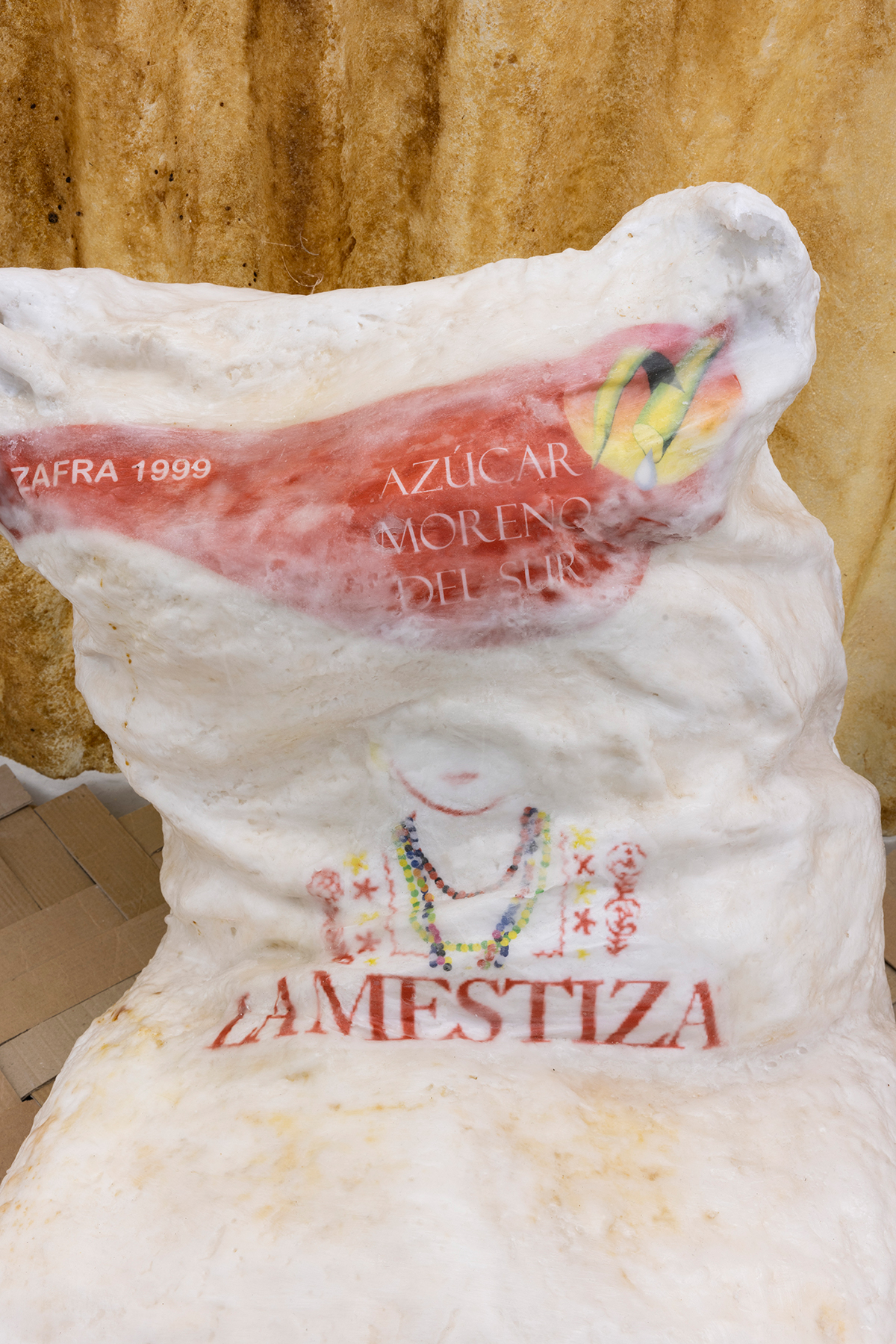 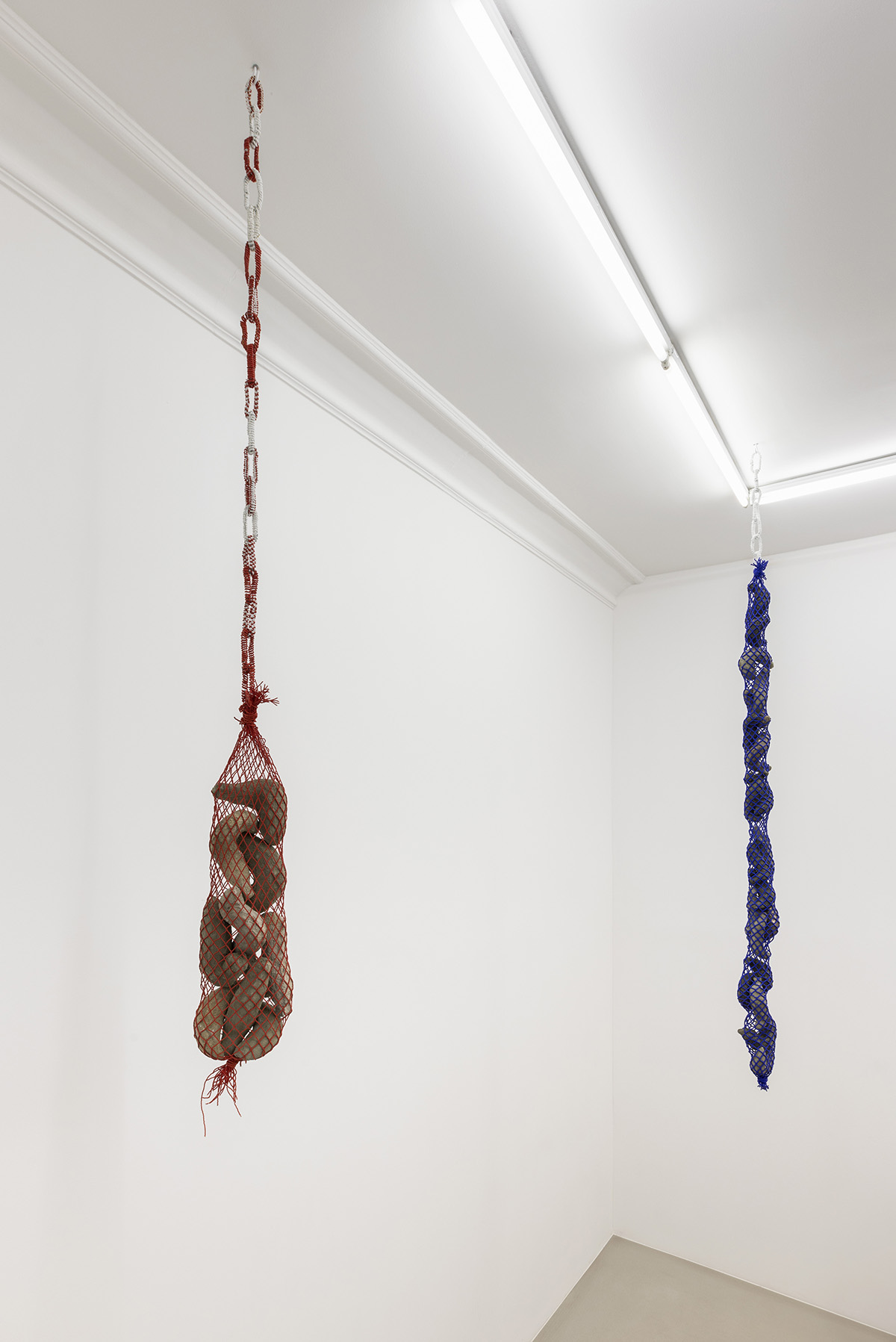 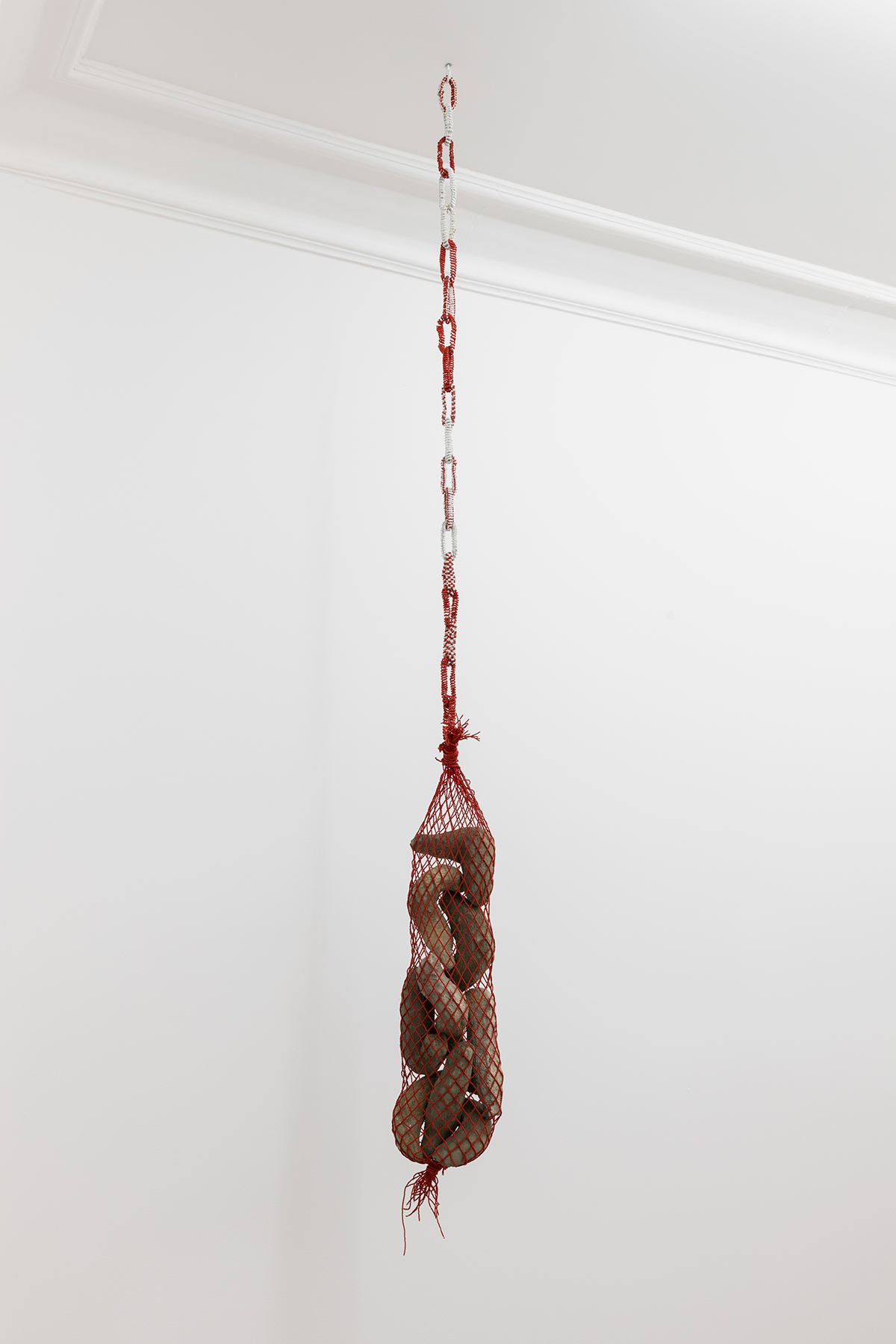 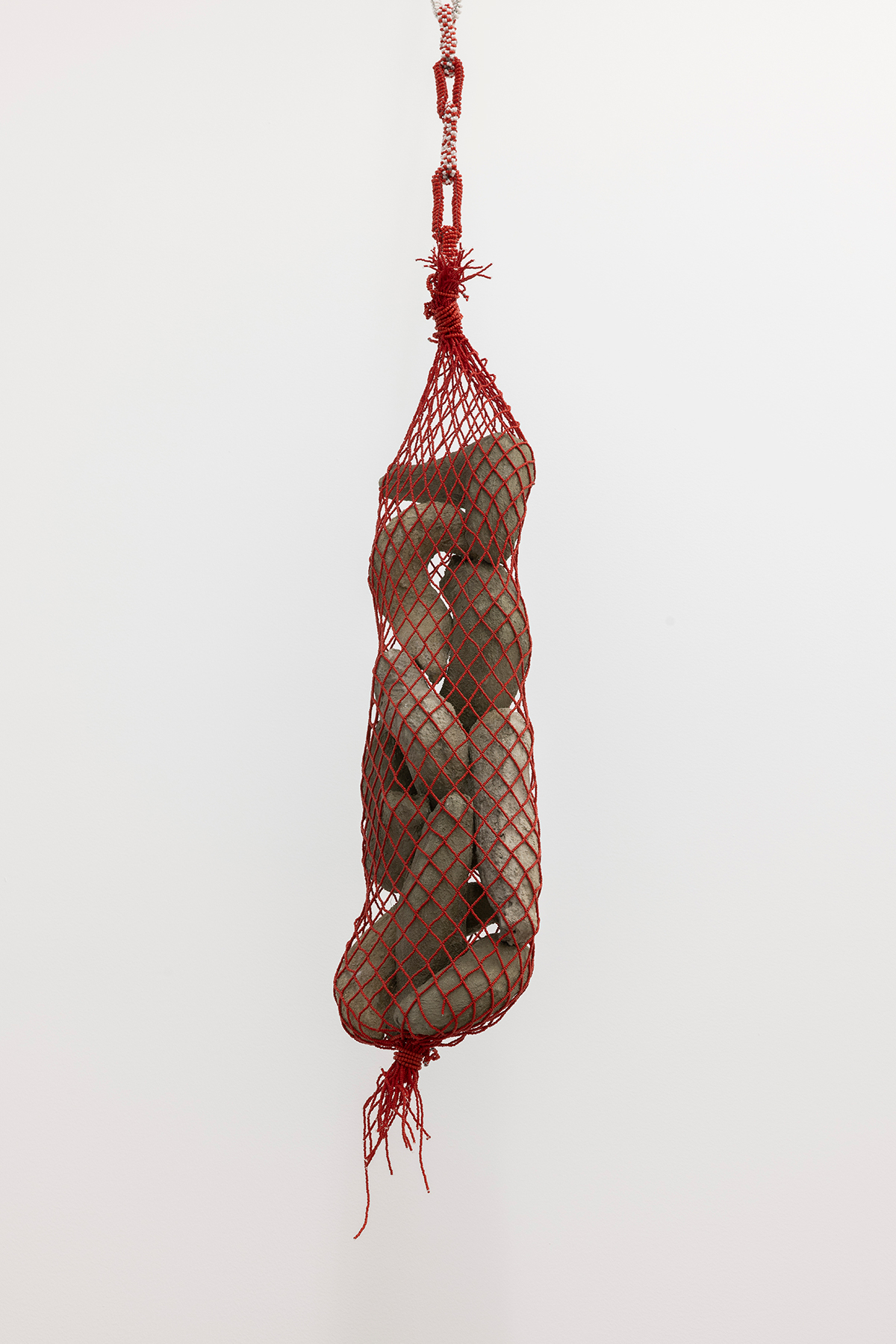 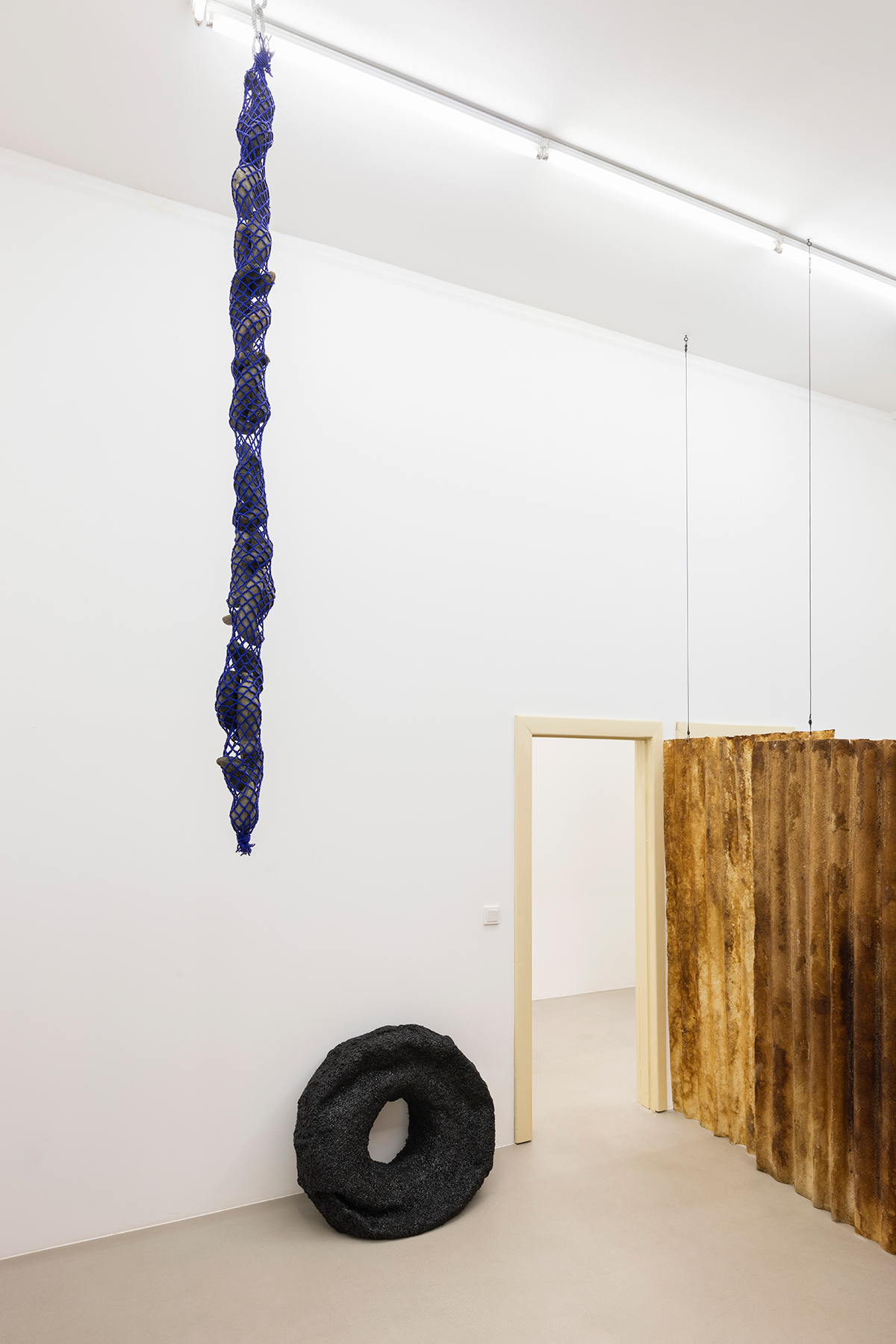 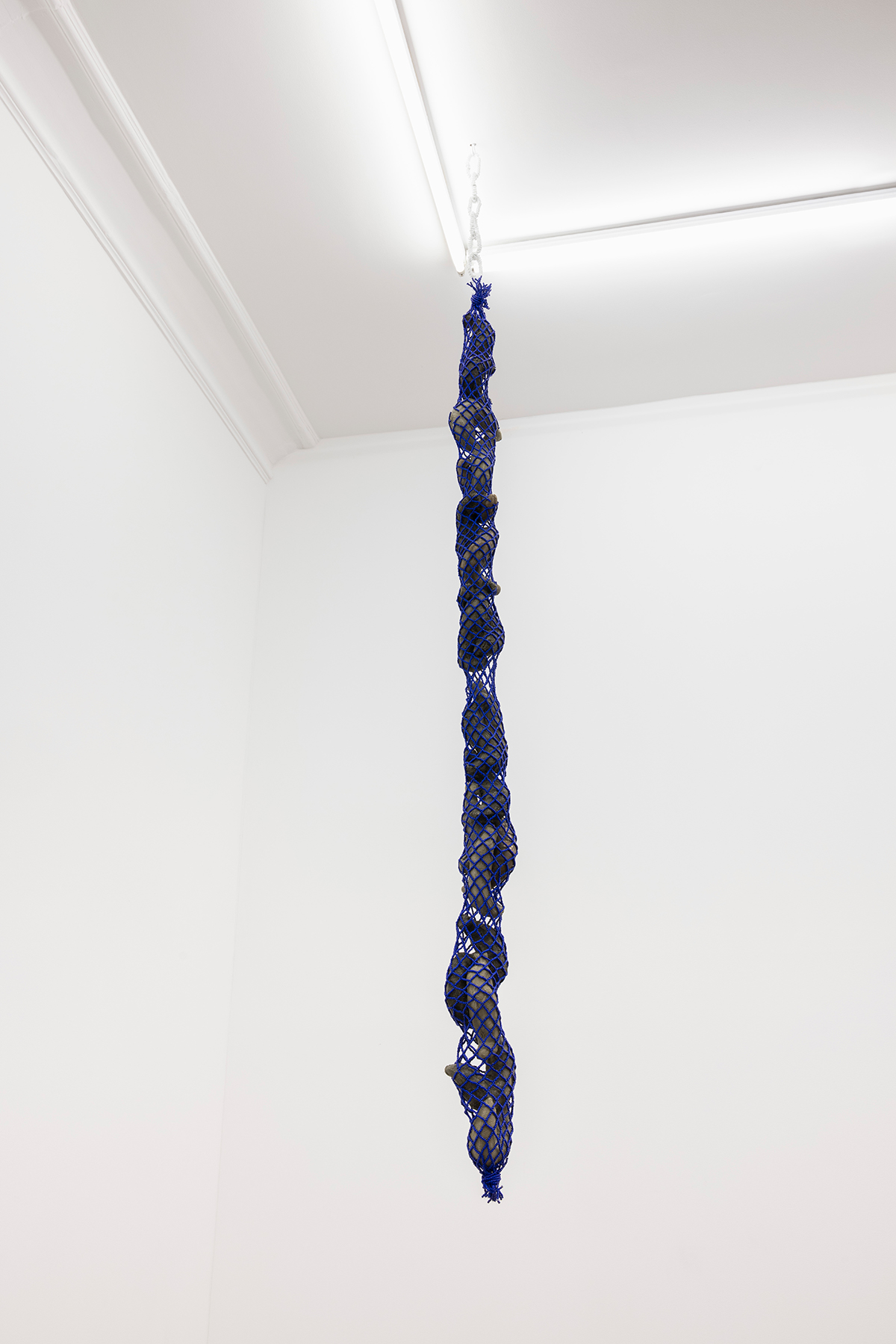 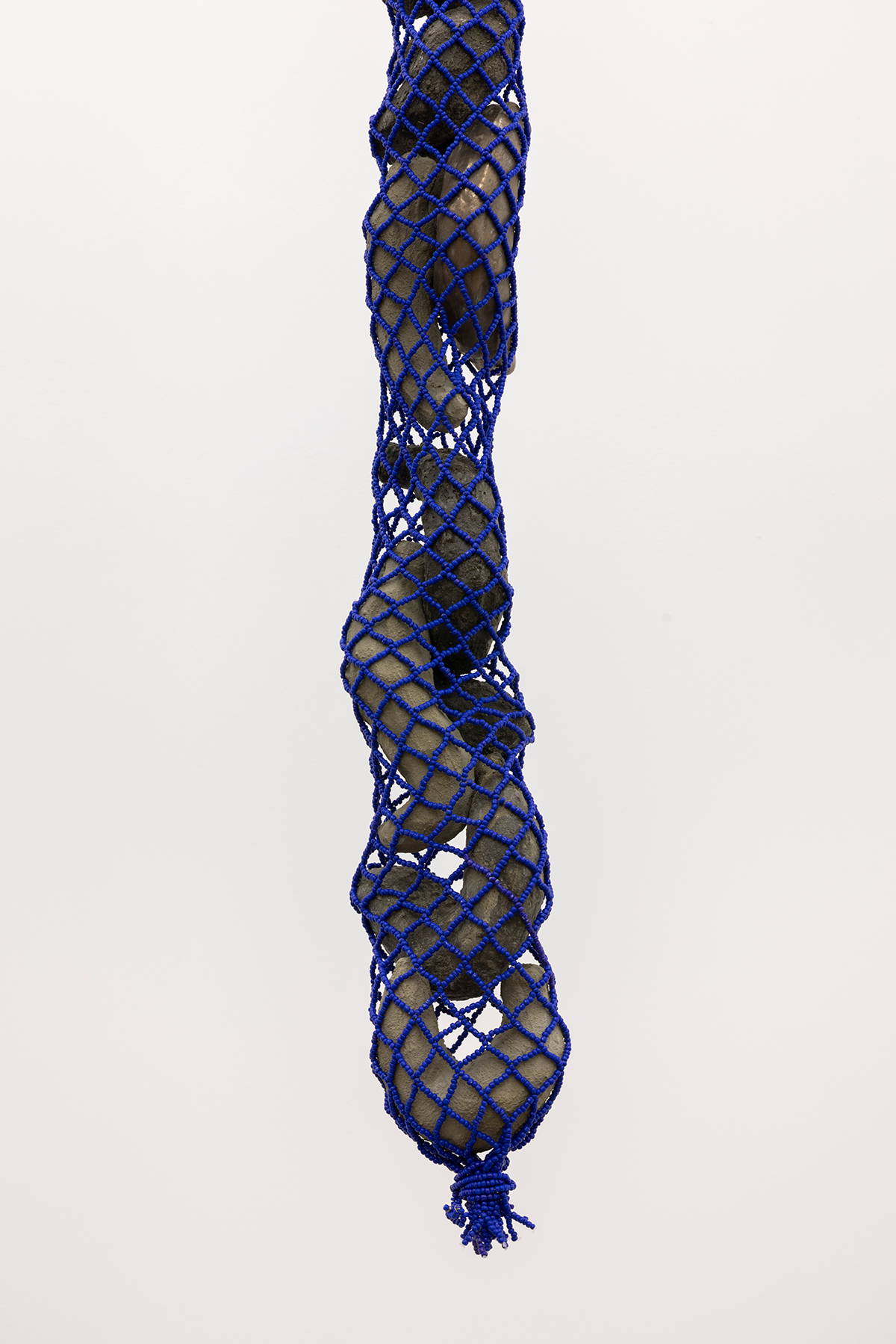 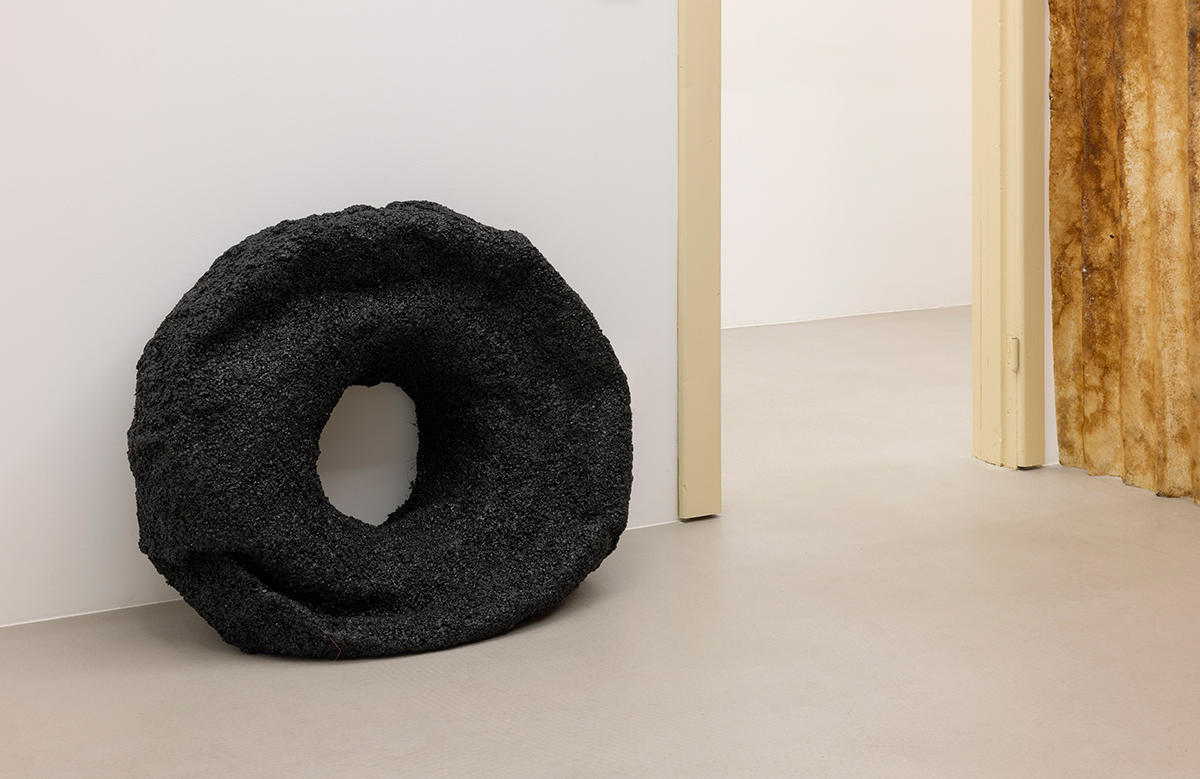 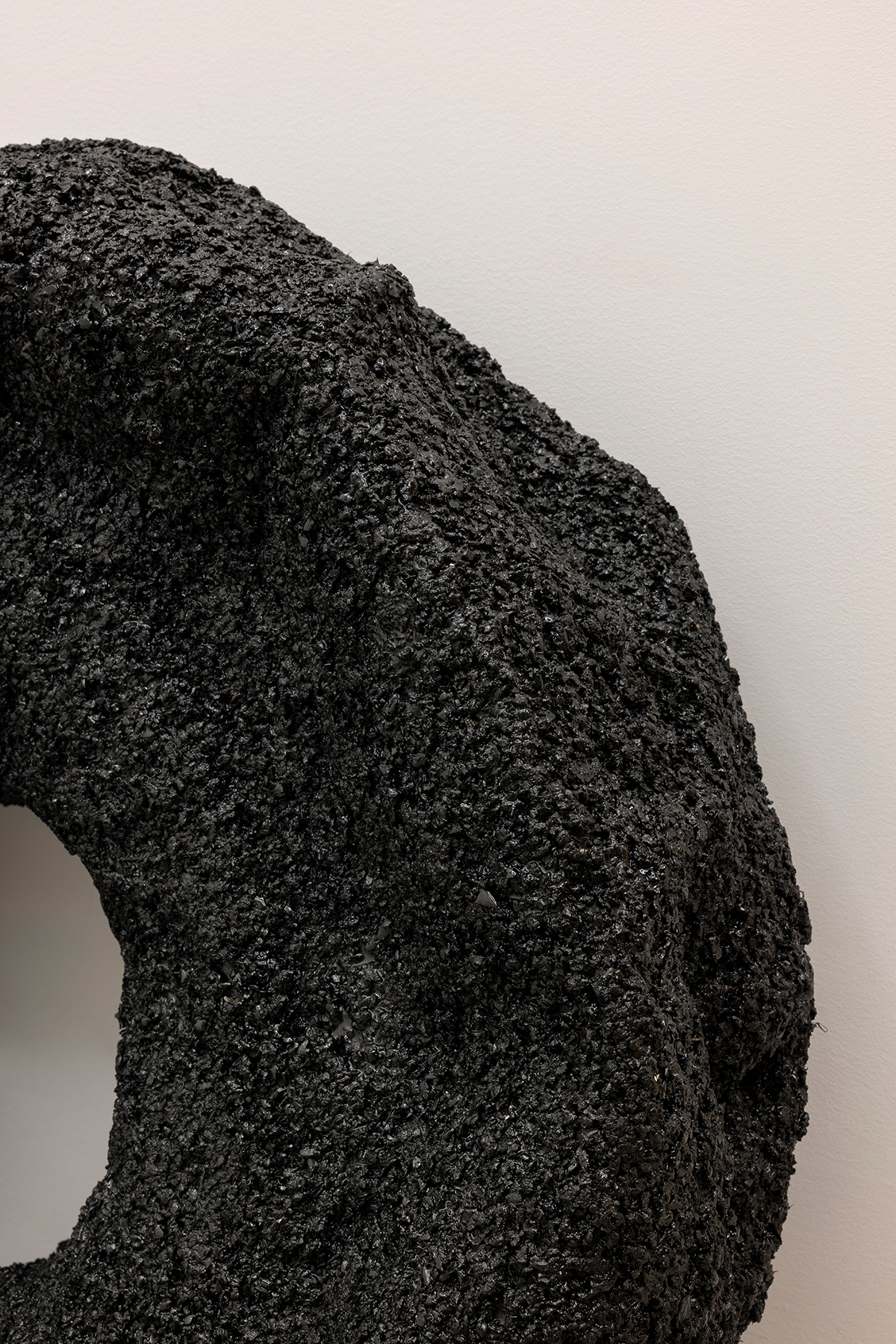