In the exhibition Chapel of Care and Rage, Marleen Rothaus (Bielefeld, 1991) creates a space for protection and organization against the harshness of historical reality. Under the watchful eyes of mother goddesses and their companions, Rothaus reconsiders how these figures’ stories have been told and retold, yesterday as well as today, to express the struggle for gender equality across geography and time.

Unfolding through a colorful, cartoonish mirage of mythical and natural elements, painted flags hanging in the space attempt to mimic a potential decomposition of sacred altar drapes. Expressing critiques of oppressive systems of power, Rothaus, an artist, feminist and social worker, repeats preexisting imagery and stories in her paintings as a way to preserve the complexity of their meaning. Directly influenced by the theories of Jineoloji1, the revolutionary science of the women-led Kurdish freedom movement and their focus on reviving the identity of the free woman, Rothaus considers how resilient certain traits and characteristics from a shared lineage of stories are.

The myth of Şahmaran, which portrays her as once hidden from humanity, and her wisdom has been kept alive through verbal history. Rothaus’ The Secrets Keeper portrays her in the exhibition as the central panel in a tryptic flanked by winged panels, featuring a stinging nettle and milk thistle painted in electric vibrance. Both plants hold diverse healing potential yet are widely considered undesirable today due to their combative preservation tactics of stinging and poking those that touch them. Rothaus’ clusters of iconography can be seen in a similar manner: undesirable to some, these characters, plants and animals promote communal healing and self-defense with weedy persistence. Likewise, Şahmaran has survived the ages to become a popular symbol within the Kurdish women’s and LGBTQ+ movements.

Rothaus often paints in response to certain social keystones, typically basing her work on a specific philosophy or theoretical text. In the Chapel of Care and Rage, Rothaus follows the principles of Jineolojî to express how women’s knowledge is preserved in the depths of social life despite patriarchal denial and methods of annihilation. Belonging to this body of wisdom is Şahmaran as well as other archetypal characters seen in the chapel, such as theological figures from the Roman Catholic tradition. Using a distinct style of portraiture, Rothaus shows her figures, some of which hang in triptych formations like altar drapes, levitating as if suspended in flight – a reference to the saints and the resurrected Christ of early Christian art and apse mosaics.

Through this research-based approach, Rothaus explores the role of matriarchal values around community and care. In the space, a veiled Saint Mary protectively watches over the chapel in a body as red as the devil. Revealing a third eye, the Virgin Mary is depicted with exposed breasts gushing with a milky substance. Her figure has often been depicted, but rarely in such bodily acts of nourishment. Allowing multiple portrayals of the Mother of God to exist at once, Rothaus shows Mary as a protector who is simultaneously loving and frightening, devil and saint, mother and misfit. And like Şahmaran, sacrifice underlines her experience.

In a chapel of many myths, cultures and religious references, the viewer becomes aware that regardless of origin, maternal tropes resurface throughout history. In Mother of Change, Rothaus paints her rendition of the Burney Relief 2, which depicts a nude figure with bird talons and wings whose intended identity is unknown. Possibly Ereshkigal3, Ishtar4 or Lilith5, this uncertainty proves how similar all three stories are.

In Rothaus’ Mother of Change, the figure is shown once again as a horned creature with hybrid companions, but in the act of breastfeeding – a symbolic act of care, kinship and aid.

Throughout the Chapel of Care and Rage, Rothaus presents the iconic figures in harmony with their accompanying characters, plants and wild animals. Together, they gather in a unified spirit of fury and protection. As reminders to carry their message onwards, the visitors pass a protest banner and megaphone upon leaving the gallery.

1 Jineolojî traces back to the ideas and actions of decolonial thinker and leader of the Kurdish liberation movement, Abdullah Öcalan.

2 The Burney Relief is a Mesopotamian terracotta high relief of either the Isin-Larsa period or Old-Babylonian period. The plaque depicts a winged, nude, goddess-like figure, flanked by owls and perched upon two lions.

3 Ereshkigal is a Mesopotamian mythological figure known as the queen of the underworld.

4 Ishtar is the Mesopotamian goddess of love, war and fertility.

5 Lilith is a primordial, female demon from Mesopotamian and Judaic mythology who, like Adam, was created from earth, but had to leave paradise because of her disobedience to male authority. 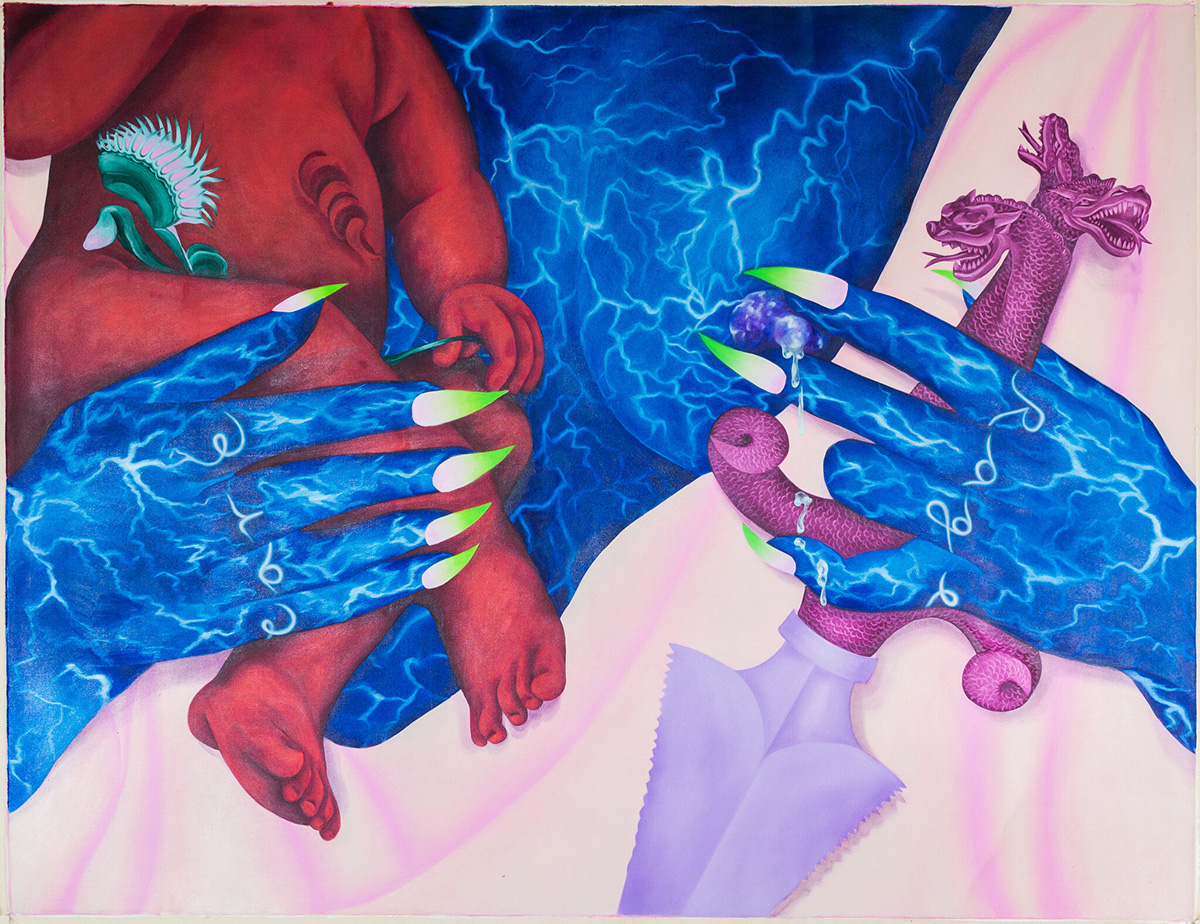 Marleen Rothaus (b. 1991, Bielefeld) studied painting at the Kunstakademie Düsseldorf, where she graduated with a master’s degree in 2020 under the guidance of Andreas Schulze. In 2016, she took up parallel studies in social work in Cologne, a starting point for her engagement in feminist activism and its integration into her artistic practice. Approaching various feminist methodologies and theories, Rothaus depicts queer and feminine figures veiled in magic and myth, pulling them from their original contexts and histories into the present.

Her work has previously been shown at the Bonnefantenmuseum, Maastricht; Kunsthalle Düsseldorf, Düsseldorf; and sonneundsolche, Düsseldorf, amongst others. As an artistic assistant at Kunsthaus KAT18 and member of X-SÜD, Marleen Rothaus is committed to the social recognition and equal rights of artists with disabilities. She lives and works in Cologne.