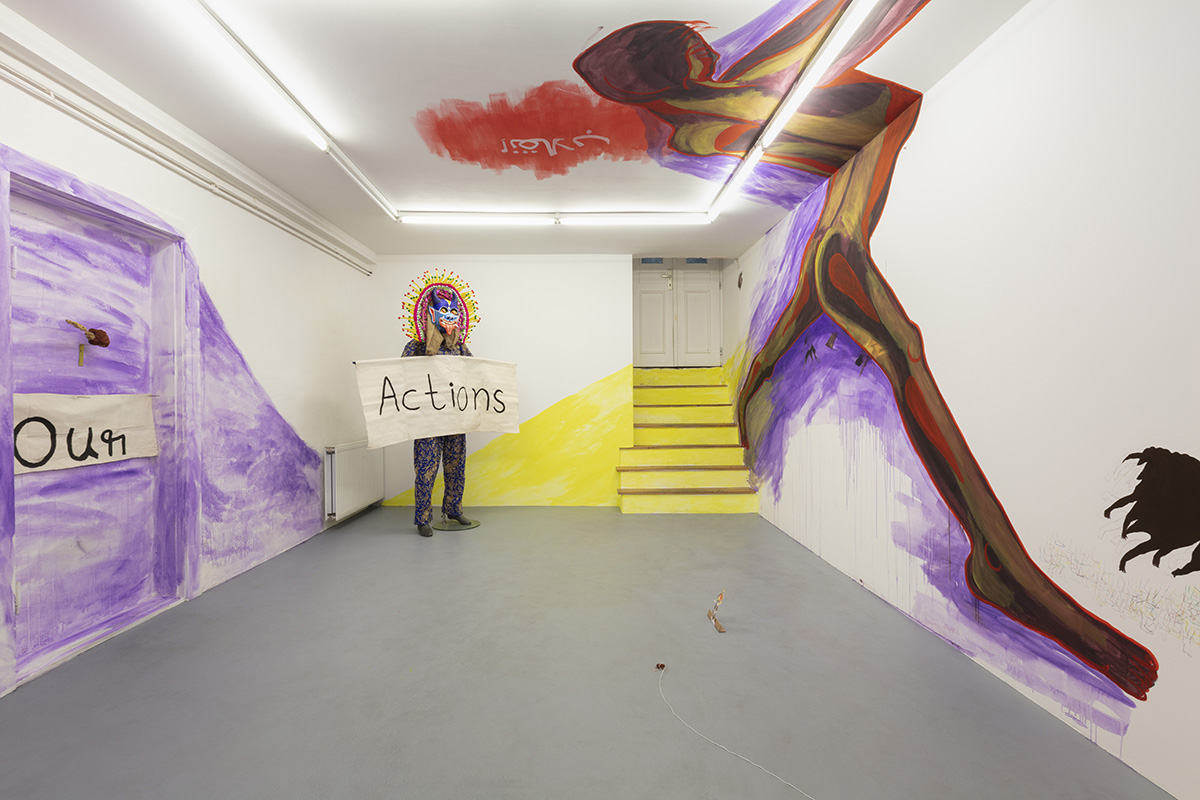 Arijit Bhattacharyya, “Our Sorrows will turn into Actions”, installation view at Bungalow/ChertLüdde, 2021 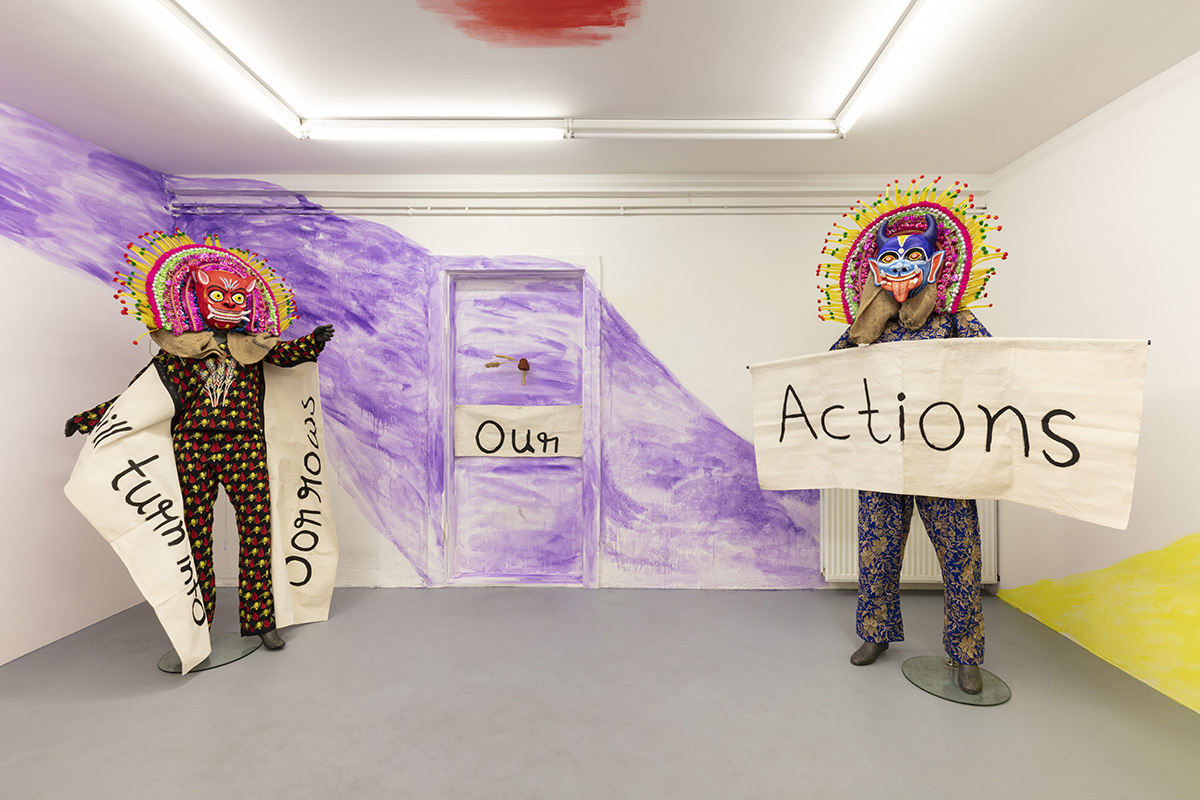 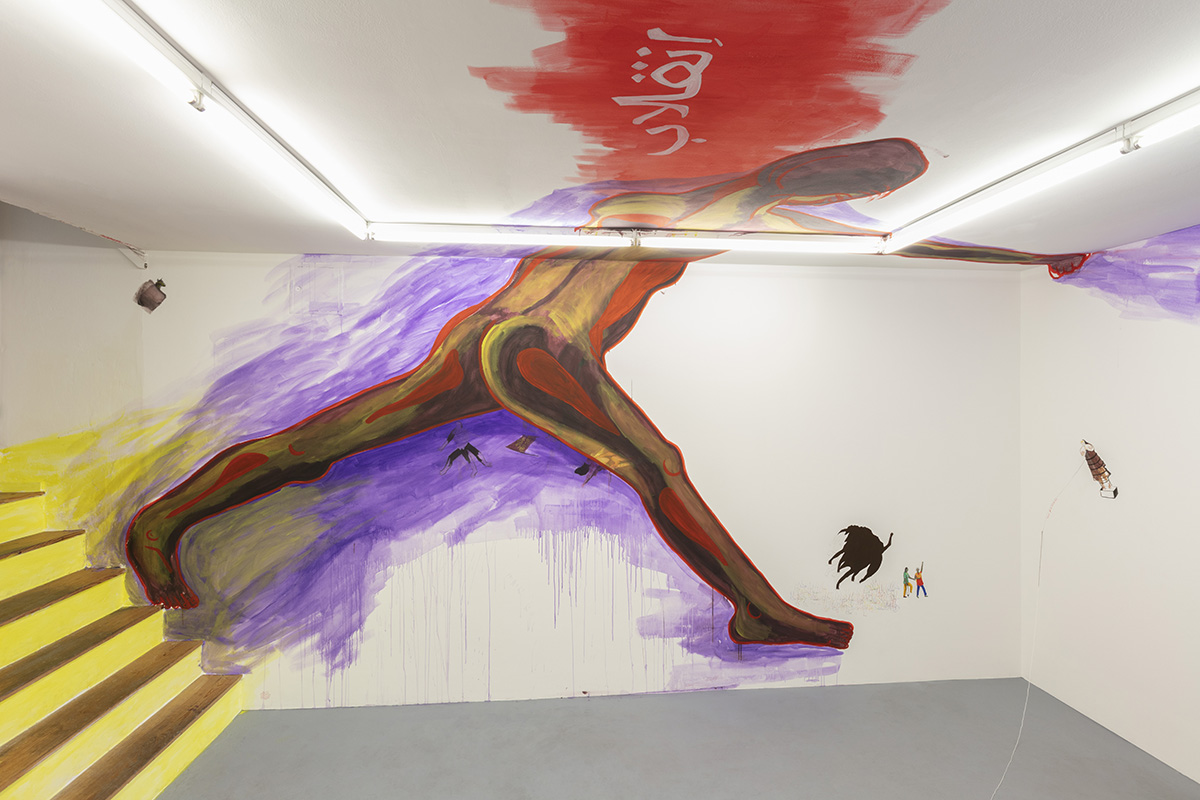 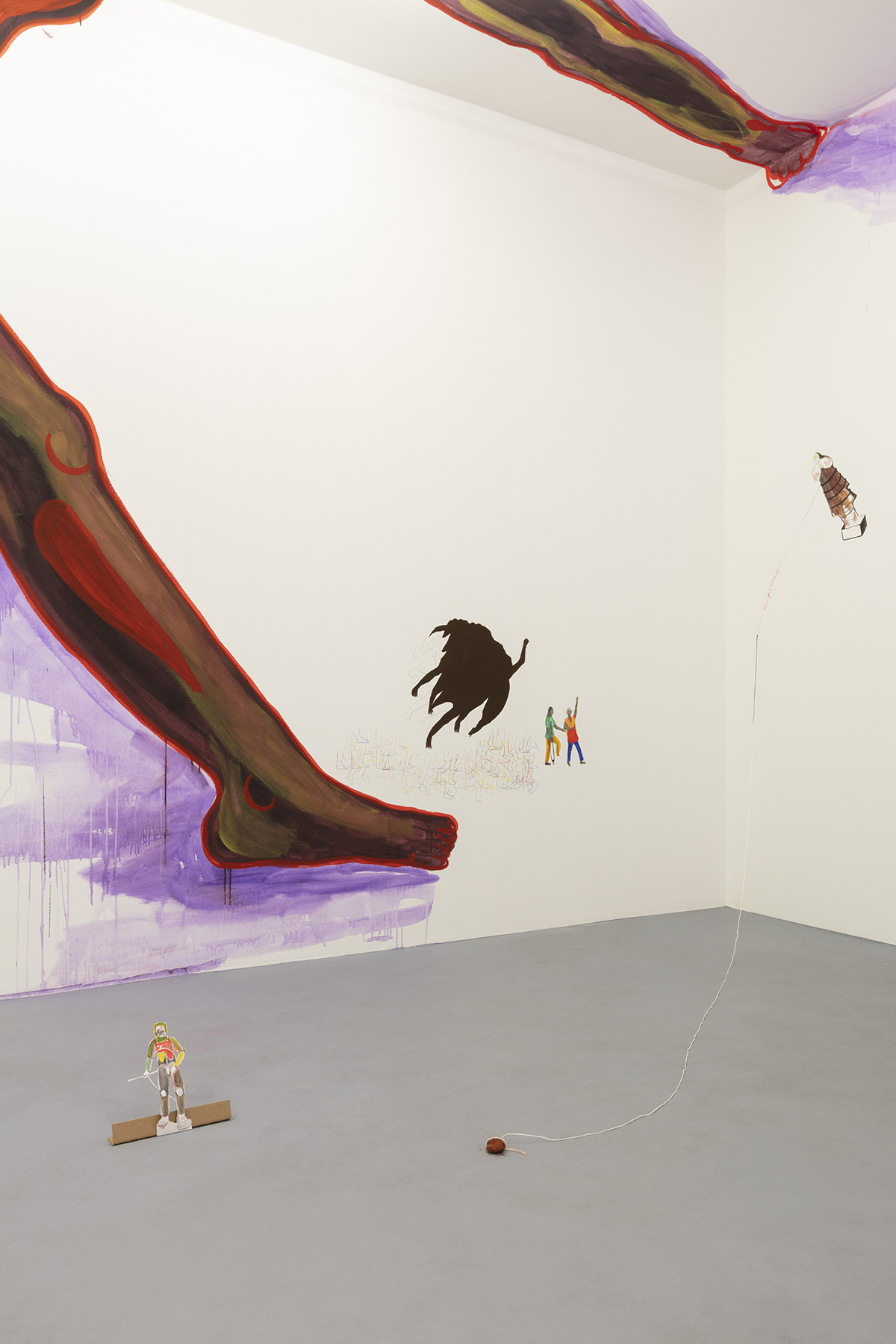 Bungalow is pleased to present a solo exhibition by Arijit Bhattacharyya (b. 1994, India).

An exhibition and artist residency, Our Sorrows will turn into Actions foresees different phases of development between research and activation of the Bungalow space. Integrated into the installation will be lecture-performances and moments of convivial exchange focusing primarily on understanding food, objects, and human bodies as sites of social disobedience. Arijit will inhabit the studio in the first month, using it as a space to develop site-specific works such as wall drawings, to accompany what he terms ‘Disobedient Dresses’ produced in the artist studios in Surat and Kolkata.

Arijit’s wall drawings speak a language that is influenced by the ‘Mughal paintings’ (1) and also by artists like Chittaprosad (b. 1915, Naihati, India; d. 1978) (2). His mural in Bungalow is a visual display of a possible future in which the People of India hold their elected government accountable for deliberately carrying out social atrocities to the benefit of the upper class and high-caste communities. Arijit grew up in the suburbs of Kolkata, where apart from being exposed to extremely influential and popular Bengali icons like Rabindranath Tagore (3), Kazi Nazrul Islam (4), Satyajit Ray (5) and Mahasweta Devi (6), he was also exposed to powerful cultural expressions like “Bahurupi” (7), “Purulia Chau” (8) and “Jatra” (9).

In his exhibition at Bungalow, Arijit takes references from Bahurupi and Purulia Chau traditions to imagine dresses that can be transformed into protest props. Both the dresses are designed such that banners may be hidden inside of the folds, able to be made visible in times of protest. The multipurpose of a dress and a person’s identity can be directly linked with the Bahurupi tradition, in the idea that if we concede that clothing and its differences define a person’s identity, a person of humble status, with a change of clothing, can become a fearsome demon. Clothing is accompanied by face masks that are meant to hide the identity of the protesters and can also be used as a tool to appear fearful towards opposing power structures such as the state authorities.

Both of these dresses are made from Khadi, the hand-spun and woven natural fiber cloth used in 1918 by Mahatma Gandhi during the freedom struggle of the Indian subcontinent, to express the urgency of independence (mostly in a socio-economic expression) of India from British rule. The dresses are embroidered with motifs, texts, drawings, and political symbols that express the diverse cultural axioms which speak to the artist.

An integral part of the exhibition will be a series of lectures and cooking sections that expand on the thematics above.

One first side-event will take place on August 15th, as part of the program organized by Berlin-based magazine Arts of the Working Class, whose current issue “Souls for Food” investigates mechanisms of social subjugation through the distribution, production, and consumption of food. On this day, which also marks the anniversary of India’s independence from the United Kingdom – the artist cooks for the audience a Beef Kaleji (beef liver curry) and rice. This engagement with food asks a very simple question, “How political is our curry?” through a lecture performance.

Another point of exchange will occur on the occasion of the program Mies in Mind, a parcour exhibition organized by Index Berlin in collaboration with the Neue Nationalgalerie, which after several years officially reopens its doors in Berlin.

For this occasion, Arijit will present the public with a lecture titled Brutally Bungalow, taking place on Saturday, the 21st of August at 8.30 PM in the gallery and Bungalow courtyard, exploring the connection between the South Asian origin of the word “Bungalow” and its associations with local Bengali architecture, and its violent transport to the Western world resulting in its extreme influence in modernist architecture.

Reflecting upon the legacy of Mies van der Rohe, Arijit approaches the origins of modernist architectural design and its touchstones, such as the iconic low house and transparent openings recalling a veranda structure, the latter of which has South Asian origins. Through an illustrated reading, the artist takes us on a journey back in time to rediscover the origins of the modernist tradition and its contemporary political consequences in India.

Arijit Bhattacharyya (1994, India) is an artist and independent curator currently living and working in Weimar, Germany. His practice revolves around contentious narratives of resistance through social engagements, design interventions and lecture-performances. His artistic discourse is deeply rooted in the dissecting trajectories of socio-political history and its implications in cultural practices. As a curator, he is invested in artistic negotiations that investigate methods of social disobedience. He holds a  Masters in Fine Arts from the Bauhaus Universität Weimar and also holds a Masters in Visual Art from the Maharaja Sayajirao University of Baroda.

NOTES:
1: Mughal painting is a particular style of South Asia, particularly (more specifically, modern-day India and Pakistan), painting confined to miniatures in the form of book illustrations or as single works to be kept in albums (muraqqa). It emerged from Persian miniature painting (itself partly of Chinese origin) and developed in the court of the Mughal Empire of the 16th to 18th centuries.

2: Chittaprosad was a staunch activist, artist and active member of the Communist Party of India. A self-taught artist, he had always wanted to pursue art but was denied entry into either Kala Bhavana of Santiniketan or even the Government College of Art & Craft for his political leanings. In the 1940s, he was inspired by Purnendu Dastidar to join revolutionary activities and took shelter at the office of the Student Federation of India in Kolabagan. During this time, many of his anti-Fascist woodcut prints, sketches and cartoons were published in the party’s journal Jana-Yuddha (‘People’s War). Gradually, he became an important voice in the fight against colonialism and believed art-making to be an inherently political act.

In 1943 Bengal suffered one of the worst man-made famines in the world, that killed almost three million people (this is the official number from the colonial British government,  but the actual consequence of it was likely much greater)  — a direct result of British World War II policies robbing Bengal of all its food grains, using them to feed the British military and citizens. The Communist Party of India (CPI) assigned Chittoprasad and photographer Sunil Janah to tour the famine-struck districts of Midnapore and Bikrampur and document the horrific human suffering.

During this time he travelled villages and filled his sketchbooks with a series of pen and ink sketches portraying impoverished households, skeletal bodies of starving people, and malnutritioned children. He witnessed famine, starvation, death, communal killings, ravages of war and Partition and documented them in his inimitable style, through art. Chittoprasad’s illustrated report/ sketchbook account of the famine was published in 1943, titled ‘Hungry Bengal.’ But the British government immediately seized and destroyed almost all of the copies.

3: Rabindranath Tagore – born Robindronath Thakur – 7 May 1861 – 7 August 1941 was a Bengali polymath – poet, writer, playwright, composer, philosopher, social reformer and painter. He reshaped Bengali literature and music as well as Indian art with Contextual Modernism in the late 19th and early 20th centuries. Author of the “profoundly sensitive, fresh and beautiful verse” of Gitanjali, he became in 1913 the first non-European person of color to win the Nobel Prize in Literature. Tagore’s poetic songs were viewed as spiritual and mercurial; however, his “elegant prose and magical poetry” remain largely unknown outside Bengal. He is sometimes referred to as “the Bard of Bengal” (The Nobel Prize in Literature 1913. NobelPrize.org. Nobel Prize Outreach AB 2021. Wed. 4 Aug 2021.).

4: Kazi Nazrul Islam (24 May 1899 – 29 August 1976) was a Bengali poet, writer, musician and the national poet of Bangladesh. Popularly known as Nazrul, he produced a large body of poetry and music with themes that included religious devotion and rebellion against oppression. Nazrul’s activism for political and social justice earned him the title of “Bidrohi Kobi” (Rebel Poet). His compositions form the avant-garde music genre of Nazrul Geeti (Music of Nazrul).

5: Satyajit Ray (2 May 1921 – 23 April 1992) was an Indian film director, scriptwriter, documentary filmmaker, author, essayist, lyricist, magazine editor, illustrator, calligrapher, and music composer. He is celebrated for works such as The Apu Trilogy (1955–1959), The Music Room (1958), The Big City (1963) and Charulata (1964). Ray was born in Kolkata to renowned writer Sukumar Ray who was prominent in the field of arts and literature. Starting his career as a commercial artist, he was drawn to independent filmmaking after meeting French filmmaker Jean Renoir and viewing Vittorio De Sica’s Italian neorealist film Bicycle Thieves (1948) during a visit to London. Ray received many major awards in his career, including 36 Indian National Film Awards, a Golden Lion, a Golden Bear, two Silver Bears, many additional awards at international film festivals and ceremonies, and an Academy Honorary Award in 1992. The Government of India honored him with the Bharat Ratna, its highest civilian award, in 1992.

6: Mahasweta Devi (14 January 1926 – 28 July 2016) was an Indian writer in Bengali and an activist. Her notable literary works include Hajar Churashir Maa, Rudali, and Aranyer Adhikar. She was a self-proclaimed leftist who worked for the rights and empowerment of the tribal people (Lodha and Shabar) of West Bengal, Bihar, Madhya Pradesh and Chhattisgarh states of India. She was honored with various literary awards such as the Sahitya Akademi Award (in Bengali), the Jnanpith Award and the Ramon Magsaysay Award along with India’s civilian awards Padma Shri and Padma Vibhushan.

7: Bahurupi (Bahu- Many; Rupi: Characters) – the term refers to a community of people, mostly landless farm-workers from West Bengal, Bihar, Jharkhand and Orissa. It portrays several characters, most of them mythological, but some with social relevance. Roughly translated, ‘Bahurupi’ means a street performer who assumes disguises. The Bahurupi form the West Bengal belong from Bedia community, a Scheduled Tribe that comprises around 1.25% of the Scheduled Tribe population in the Birbhum district, according to the 2011 Census of India.  A Bahurupi  is an artist with many faces who performs in public places and accepts money, clothes and food–anything that a viewer can shell out. The Bahurupi entertains by enacting roles of mythological characters and wanders from village to village to eke out a living. Bahurupis unanimously rue that changing tastes of people coupled with the advent of television and social media have virtually sounded death knells, forcing them to look for alternate means of livelihood.

8: Chhau dance is a semi-classical Indian dance with martial, tribal and folk traditions, with origins in the East Indian region, and panned out to its variants in the states of West Bengal, Jharkhand and Odisha. It is found in three styles named after the location where they are performed, i.e. the Purulia Chau of West Bengal, the Seraikella Chau of Jharkhand and the Mayurbhanj Chau of Odisha.
The dance ranges from celebrating martial arts, acrobatics and athletics performed in festive themes of folk dance, to a structured dance with religious themes found in Shaivism, Shaktism and Vaishnavism. The costumes vary between the styles, with the districts of Purulia and Serakeilla using masks to identify the character. The stories enacted by Chhau dancers include those from epics such as the Ramayana and the Mahabharata, the Puranas, indeginous folk stories, narratives and other Indian literature. 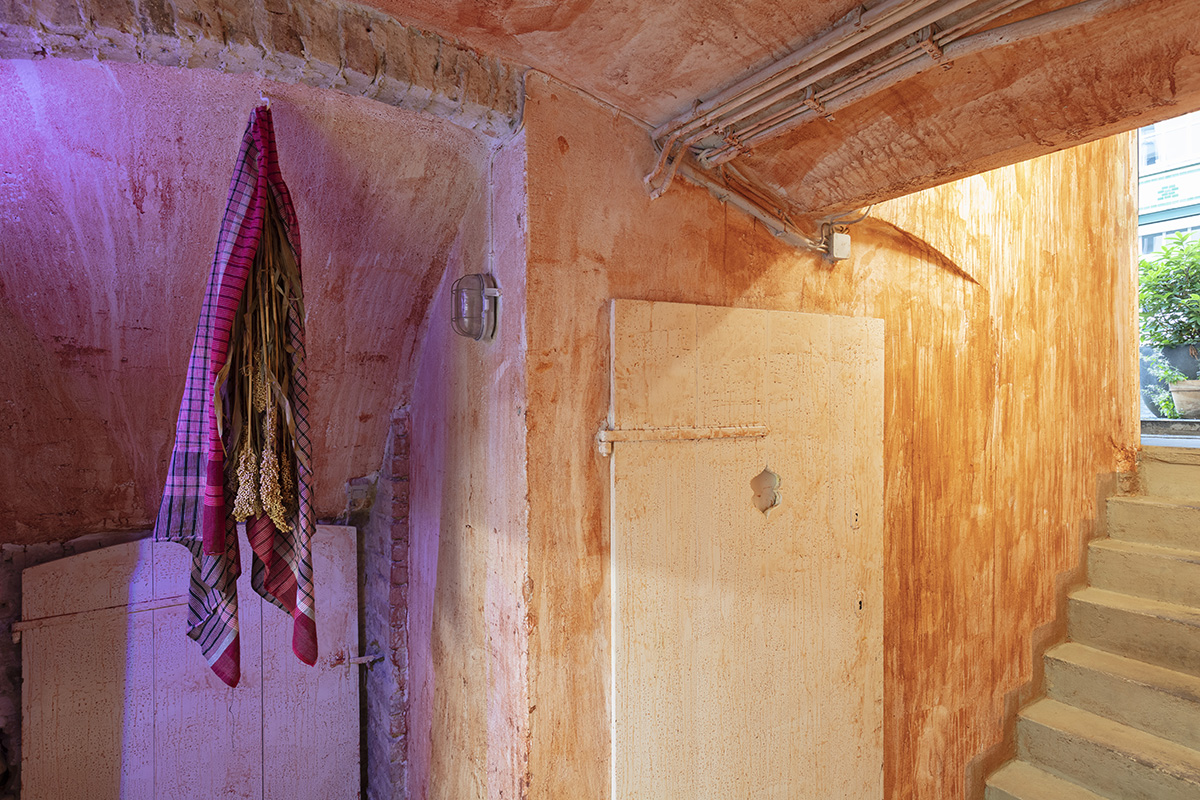 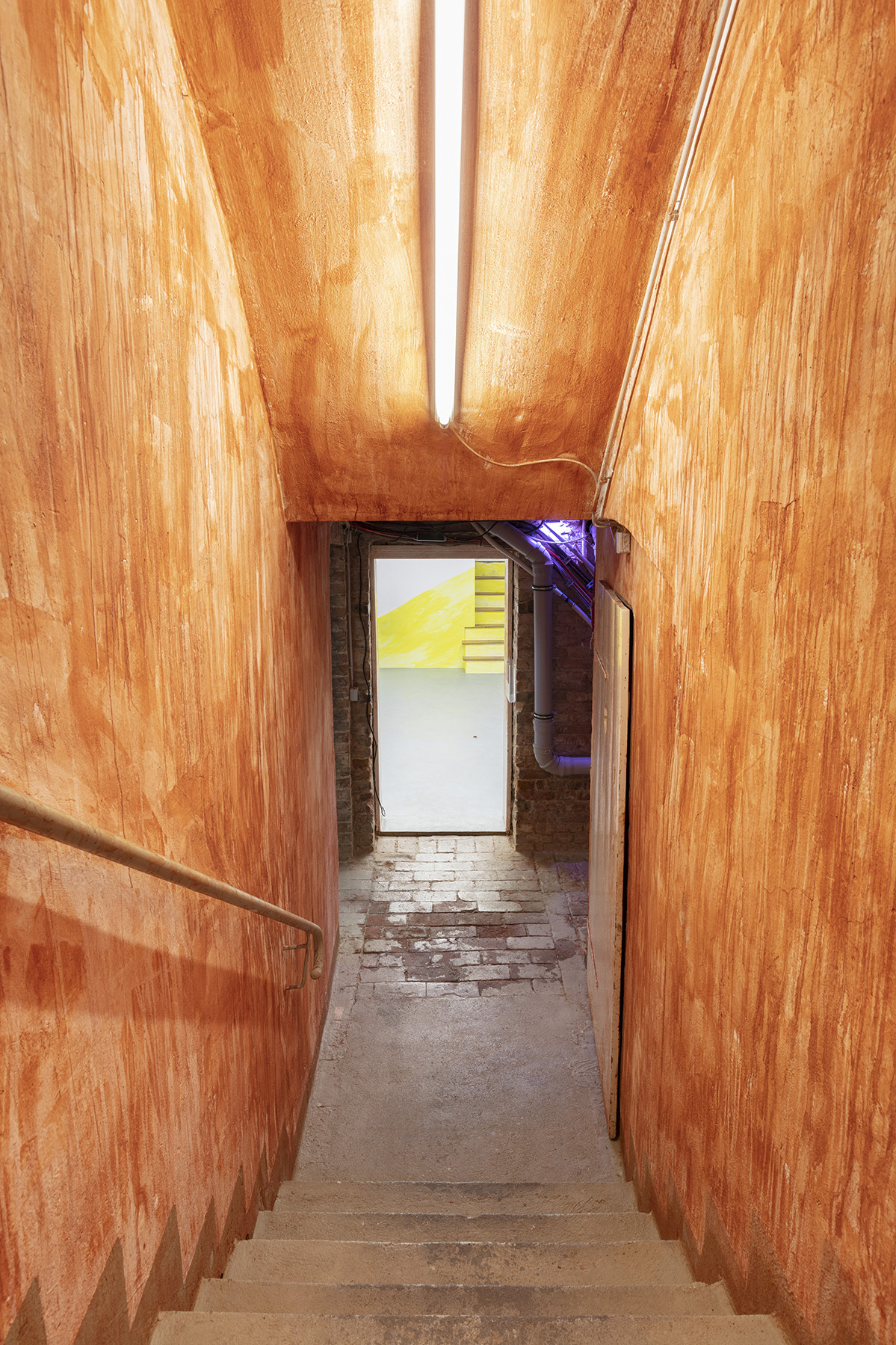 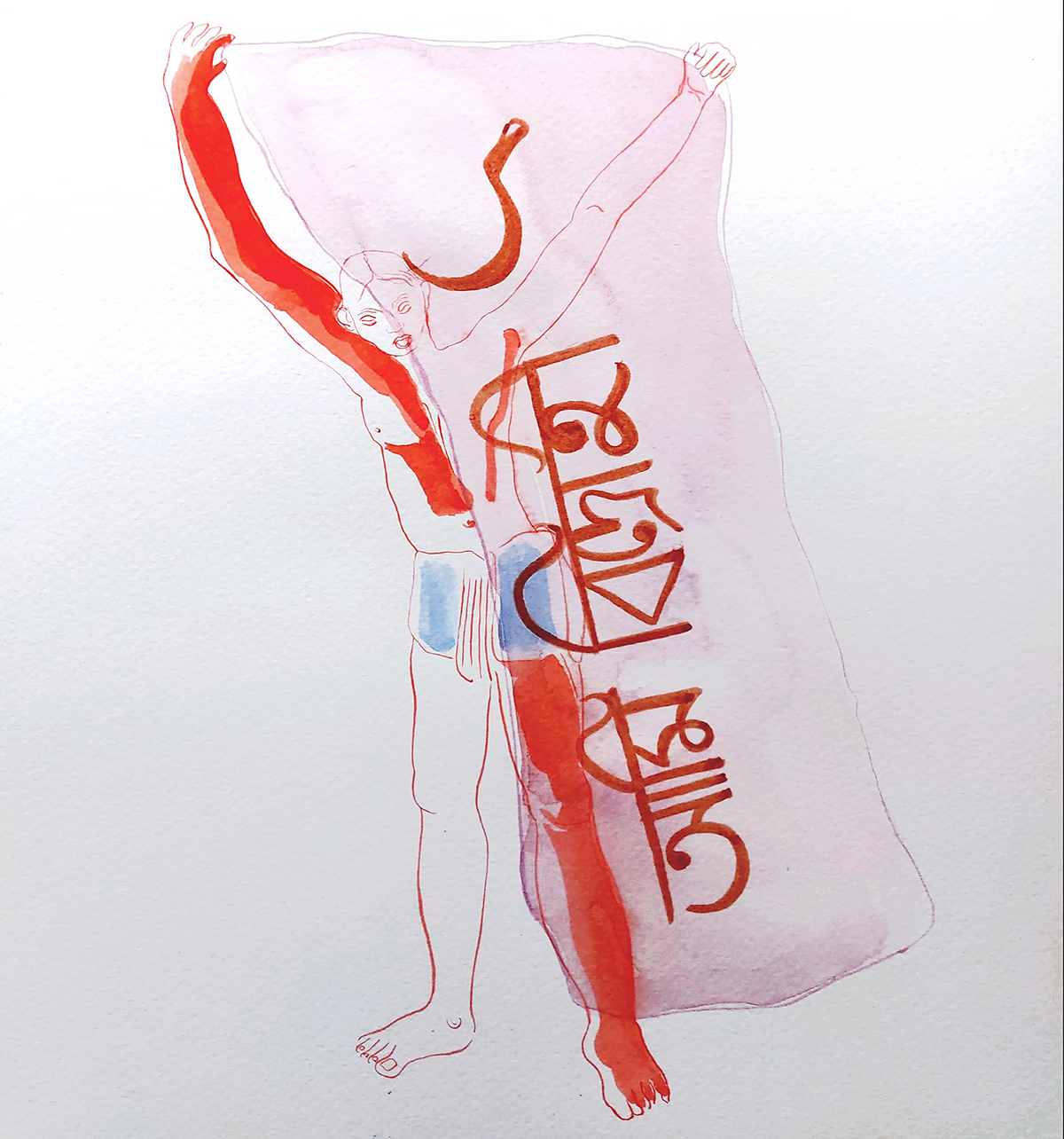 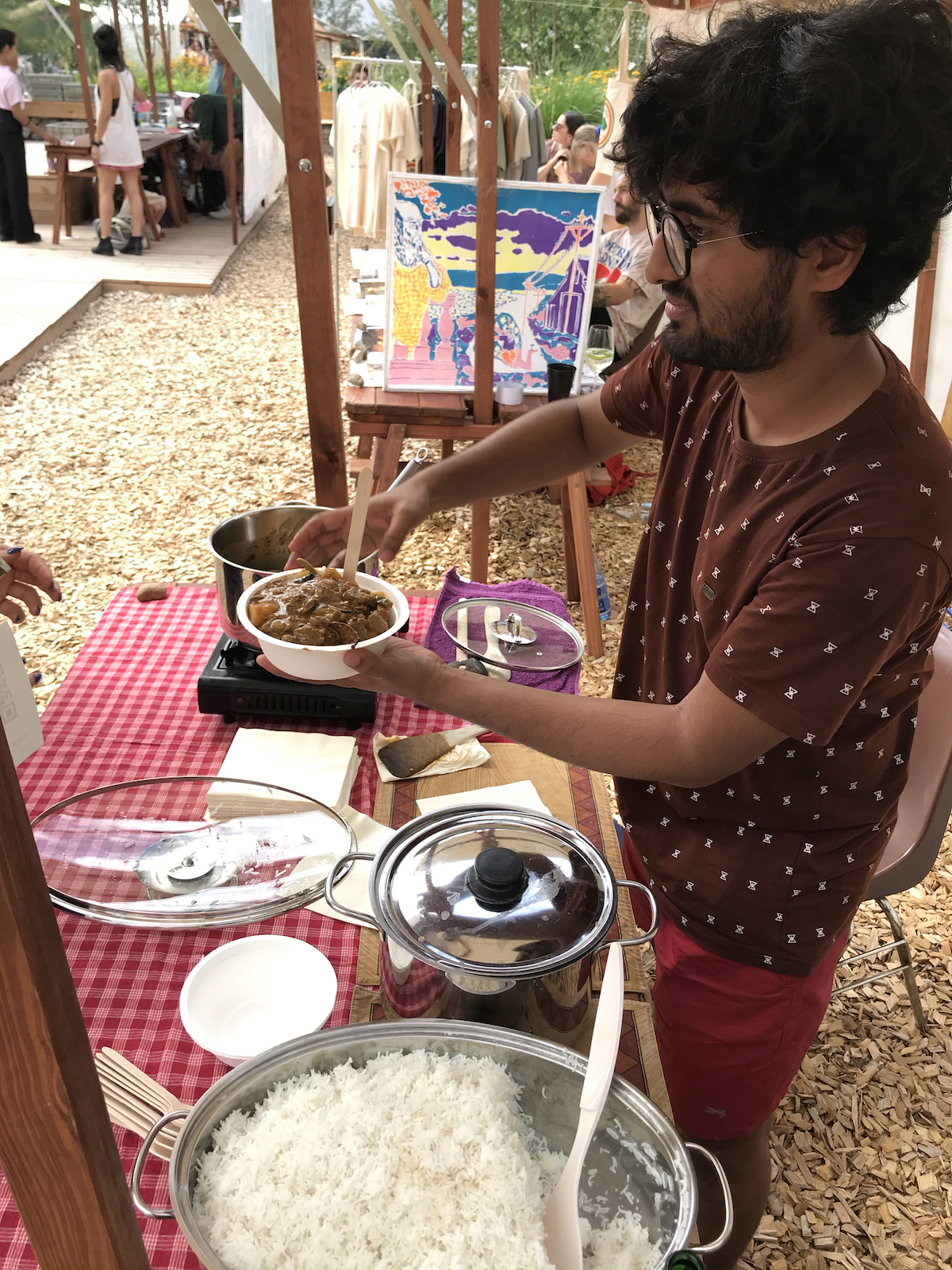 15 August 2021, 12-7pm: “How Political is our Curry?” a socio-political dialogue about India’s gastronomy and its relationship with colonialism. This cooking event took place on the occasion of the second iteration of SOULS FOR FOODS, Arts of the Working Class’ multi-sensorial market.

Check the links for more information:

– How Political is our Curry? (Lecture performance)